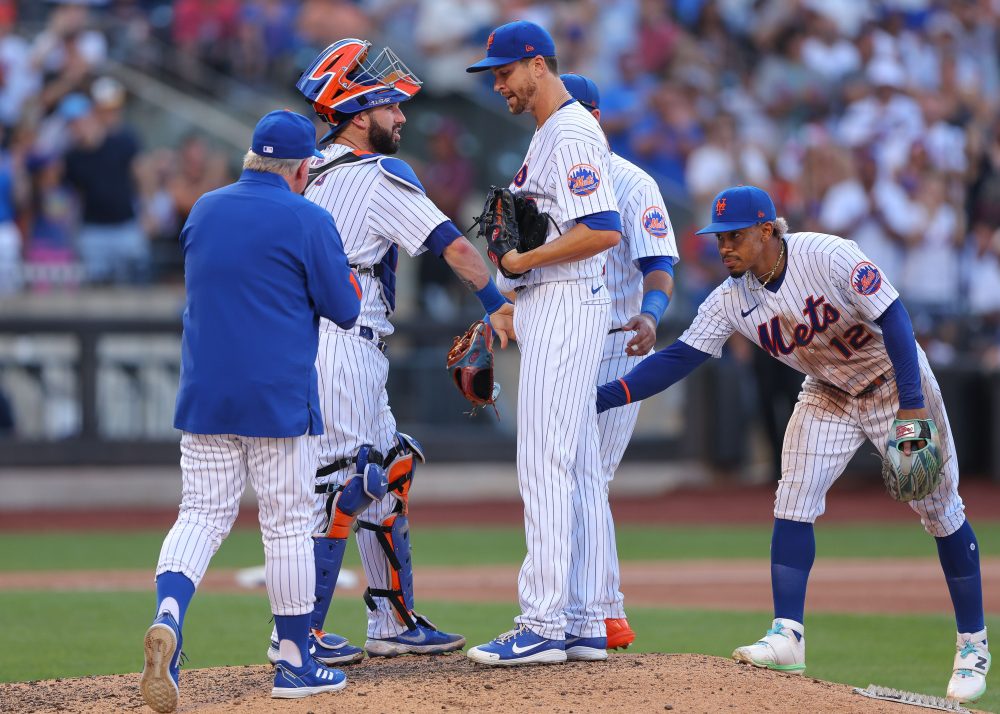 Welcome to Box Score Banter, your daily dose of the previous day’s games, with a preview of what’s to come. All season stats are entering yesterday’s games.

The Mets took four of five in the series, including a doubleheader sweep on Saturday, to extend their divisional lead over Atlanta to 6.5 games. Sunday’s game featured Jacob deGrom’s second outing back and first vs. a major league team (ignore that the Nationals won that game convincingly, after deGrom left). The Mets’ ace (co-ace?) was perfect through two outs into the sixth inning before a walk and a Dansby Swanson homer sent him to the showers. The deGrom we knew and loved before his extended absence was a threat for a no-hitter or perfect game every time out, and it doesn’t seem like 2022’s vintage will be much different. The division-leading Mets were, for once, surviving atop the NL East despite missing their best pitcher. Now that he’s back…he might actually be the best possible deadline acquisition.

Having seen their late-May double-digit division lead slowly evaporate down to half a game by July 23, their current lead must feel like a pardon. A second chance to do things right. We’ll see what they do with it—Atlanta is no stranger to extended hot streaks, but things didn’t get any easier for the defending champs as they sent down Ian Anderson. The lefty has fought his control all season long, and mostly lost, having issued a league-leading 53 walks. Mix in a second straight year with a significant decline in strikeout rate and it’s not hard to see why they sent him to Gwinnett to iron out the kinks. The division door isn’t quite closed on Atlanta, but they’re going to need to get things going in a hurry if they want to keep it ajar.

The Padres were deservedly the talk of the trade deadline, reeling in Juan Soto, Josh Bell, Brandon Drury, and Josh Hader. The Dodgers didn’t seem to care. Hader never appeared in the series, because the Padres could only scare up four runs in the three-game set. The home-sweep for the Dodgers moved their record against San Diego to 8-2 on the season and made them winners of 17 of their last 19 between the two teams.

It’s not really fair to call this a statement series, as the Padres are still without Fernando Tatis Jr., which is a fairly crucial piece to be missing. The series of trades made the Padres one of the better teams in the National League. The Dodgers, meanwhile, are the best team in baseball, having gone 21-5 in July and now 7-0 in August. When Tatis is back and healthy, they’ll be much closer to even footing. Another reason it’s not a statement series? The 12.5-game gap between the two squads entering Friday night’s opener. No matter what San Diego did at the deadline, they were unlikely to be able to meaningfully narrow that margin.

While this wasn’t especially meaningful despite the high level of competition between the two teams, there was quite a bit of meaning in the sweep for San Diego: they fell to the third Wild Card spot, a half-game back of the surging Philadelphia Phillies (9-1 in their last 10). Of course the Phillies won’t be able to play the Nationals every day, so perhaps their fortunes will change.

Oh, and just to tie a bow on this segment and bring it back to LA—they’re now 75-33, and more than a third of their losses have come against: Pittsburgh (5), Colorado (5), and Washington (3).

This is less about Montas—though he struggled mightily—than it is just the state of the Yankees right now. They can’t win slugfests like this one, or nip-and-tuck affairs like on Saturday, when they lost 1-0 (against the surprisingly traded Jordan Montgomery). It just doesn’t feel like any of the levers that the Yankees are pulling at the right ones at the moment. They’ll surely right the ship, and they still maintain a 9.5 game lead on the Blue Jays despite a mediocre July (13-13) and a crummy start to August (1-5). But things still feel quite awry at the moment. Not only did Montgomery blank them in his first start as a Cardinal, but their other big pickup in the trade market, Andrew Benintendi, got off to a 2-25 start before stroking two hits in today’s scoring bonanza.

For their part the Cardinals have won seven in a row and taken a two-game lead in the Central, as the Brewers have struggled to win games in two series against the Pirates and post-trade deadline Reds.

Gold: Max Scherzer (7 IP, 4 H, 0 ER, 0 BB, 11 K) (Aug. 6)
To ensure that no one fawned too much over Jacob deGrom, Scherzer came out and absolutely shoved during his game of the doubleheader. Not to worry, Max, there’s enough love for the both of you in Flushing.

Silver: Jesús Luzardo (7 IP, 1 H, 0 ER, 1 BB, 6 K) (Aug. 7)
In his second game back from the injured list, Luzardo was pristine against the Cubs, looking much like he did prior to his injury. Which is to say unlike he did in recent seasons, outside of a flash here or there. The Marlins have dealt with some rough injury news of late (looking at you Max Meyer), but a true Luzardo breakout would act as at least a partial salve.

Bronze: Dane Dunning (7 IP, 1 H, 0 ER, 1 BB, 6 K)
Dunning brought the heat against his former club with his best start of the year. He’s really turned it on over his last three starts, averaging six innings per, with a 2.00 ERA and a .554 OPS against.

SOME OTHER METAL: Triston McKenzie (8 IP, 2 H, 0 ER, 1 BB, 8 K)
I’m gonna be honest— I somehow missed this line going through the box scores and wrote up everyone else, so you’re getting a damn bonus metal/medal. DID YOU KNOW: McKenzie has either given up exactly four runs or zero runs in six of his last seven starts? In the other one he gave up just one. He has a 1.70 ERA since the calendar flipped to July.

Only seven games on the docket today.

TOR (LHP Yusei Kikuchi) @ BAL (RHP Jordan Lyles), 7:05 pm ET
Look, I will not in good conscience suggest that you tune in to a Jordan Lyles start. I will not. But also…it’s the only matchup of above-.500 teams until you get to the M’s/Yanks at 10 pm.

SFG (LHP Alex Wood) @ SDP (LHP Blake Snell), 9:40 pm ET
A battle of talented but frustrating-to-watch southpaws. Strap in, it’s one of the two best pitching matchups of the night. Unless you count Tyler Beede vs. Zac Gallen, but…come on, you’re not watching Pirates/D’Backs.

NYY (RHP Jameson Taillon) @ SEA (RHP Logan Gilbert), 10:10 pm ET
The Yankees better hope Taillon can right the ship or Luis Severino can get healthy after shipping out Jordan Montgomery at the deadline. In the only matchup of the night between two current playoff-bound teams, we’ll see how the highly impressive sophomore Gilbert rebounds after the Yankees tagged him for six earned runs in 5 ⅓ innings last week.