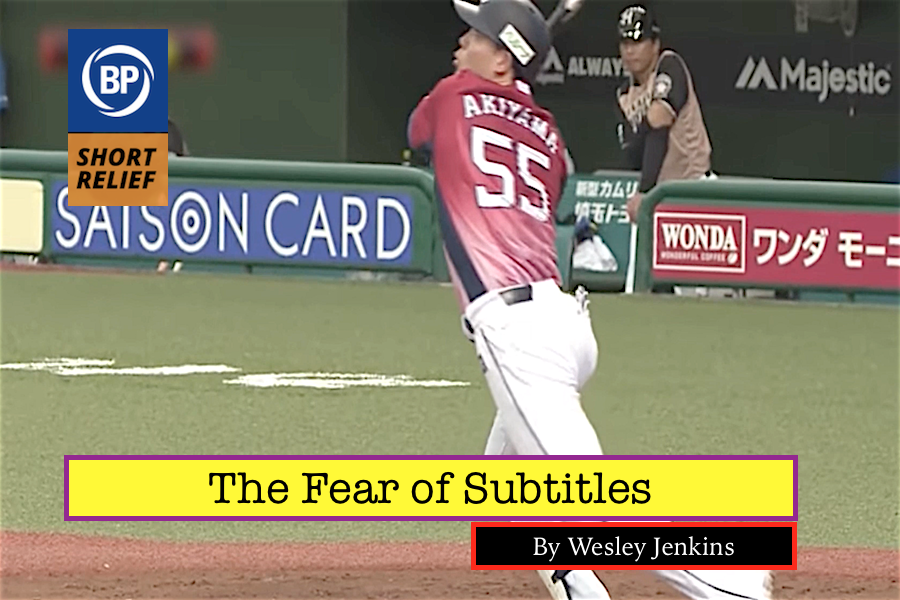 For most of December, I watched the Japanese anime Haikyū!!, the story of Shoyo Hinata, a height-challenged high schooler who wants to be the best volleyball player in Japan. To do so, he teams up with the prodigious — or as prodigious as a high school volleyballer can be — Tobio Kageyama to lead Karasuno, a former powerhouse, back to greatness. It’s a show where one game can stretch over seven episodes, with each point an opportunity for conflict, introflection, and the never-ending clash of wills. It’s absolutely fantastic; you should watch it.

I mention Haikyū!! because earlier this week the Reds finally signed a Japanese player, becoming the last of the 30 teams to do so. Shogo Akiyama, 31-year-old centerfielder, will presumably make his Reds debut on Opening Day.

It took the Reds until 2020 to sign a Japanese baseball player, 56 years after the Giants signed Masanori Murakami and two decades after the Mariners signed Ichiro Suzuki, arguably the best Japanese player to make the jump. There are reasons, of course, both understandable and sinister. Many Japanese players preferred to stay on the West Coast; others to sign with a financial powerhouse. And the Reds did try, taking their shot at signing Shohei Ohtani.

But still, bias and prejudice probably played a role. Justifications like “clubhouse chemistry” and “the language barrier” were probably thrown around. I don’t know for sure, I wasn’t alive for most of those 56 years, much less privy to front office conversations, but I think it’s safe to assume here.

When I think about these paper-thin justifications citing difference as the reason for inaction, I hear Bong Joon-ho, the South Korean director of Parasite: “Once you overcome the one-inch tall barrier of subtitles,” he said, “you will be introduced to many more amazing films.” In Haikyuu!!, Shoyo and Kageyama have different ways of talking. Kageyama talks in plays and strategies and best practices. Shoyo talks in “whooshes” and “bams” and the feelings associated with playing. And yet they operate in sync, winning together.

For over half a century, the Reds have been afraid of subtitles, forgetting that the image — the actual baseball being played — remains the same. The difference between Shogo and Shoyo isn’t just that one’s real and one’s fictional. It’s that no matter what he does, no matter how well he plays, some fans, some potential employers will always discredit his accomplishments. For some, it’s not a fear of subtitles, it’s a hatred of them; it’s not laziness, it’s a resentment of additional work. And that’s Shogo Akiyama’s true test: no matter what he does, to some, because of who he is, he will never be enough. 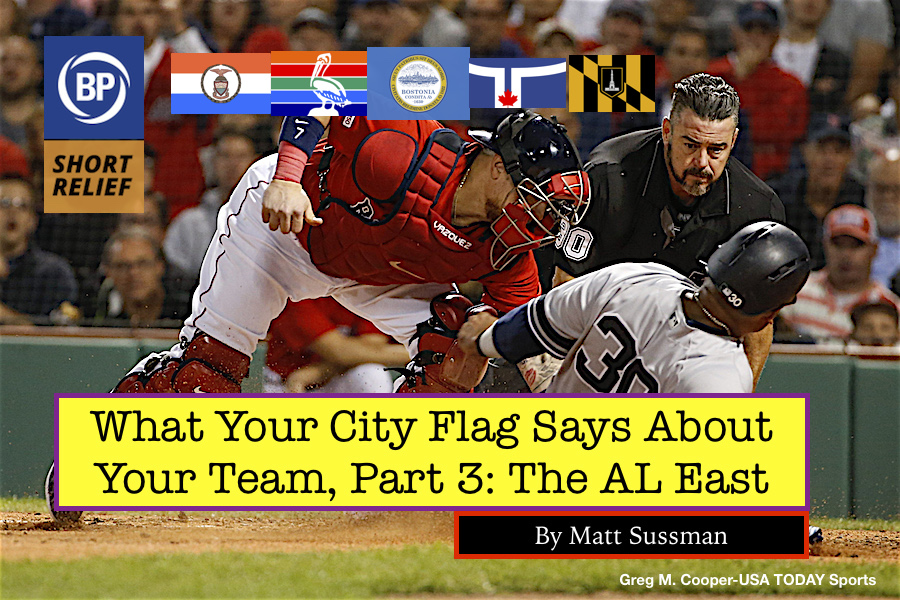 Welcome back. The national pastime of vexillology flies into the only division that is nationally televised anymore, and only part of the division: The AL East. 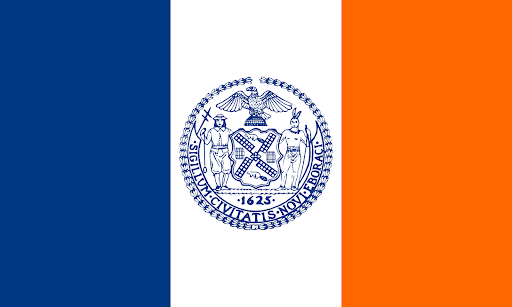 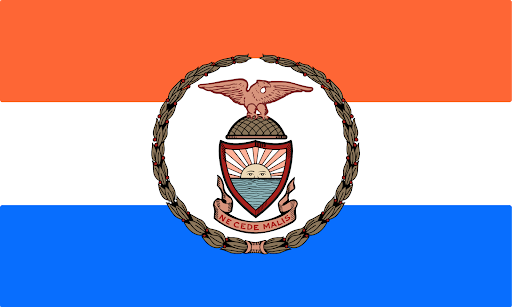 The biggest city in the country has a couple of Hallmark-ass kingdom flag color schemes. We’re just gonna nonchalantly whistle past the whole Native American imagery like it’s a windmill on a miniature golf course, which is also part of the flag, and move to the Bronx-specific one, with the Latin phrase ne cede malis which fittingly means short right field porch. The eagle with its outstretched wings played three seasons for the team in the ‘30s and still has its number retired. The sun peeking out over the horizon, not sure whether to watch the game, is also a Yankees fan, get it, you see, because it’s fair-weathered ah never mind. 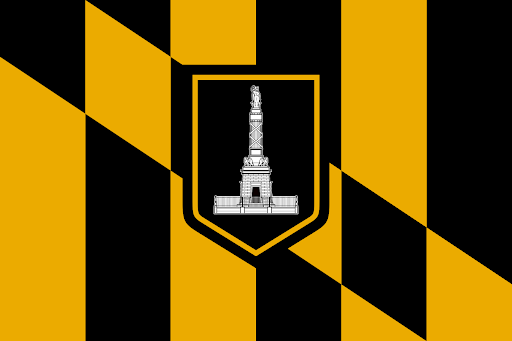 We’re going to the Orioles flag next because it’s about time they remember what it’s like to be second. On the whole, their backdrop is generally accepted as a badass design as observed on the Maryland flag. It dates back to either the English noble Lord Baltimore or the “Lord, Baltimore” team of 1988.

The flag has a few diamonds, just like their sport, but they upped the ante and went with some extremely sleek rhombuses. Perhaps it’s a sign that a few years down the road, after their fifth straight 100-loss season, they’re just going to say screw it and change their infield to a rhombus. It’s the same distance around the bases as a square! You can steal second easier! They’re going to have so much litigation to wallow through but Baltimore baseball is going to be back, baby. The large building is way too obvious a metaphor. 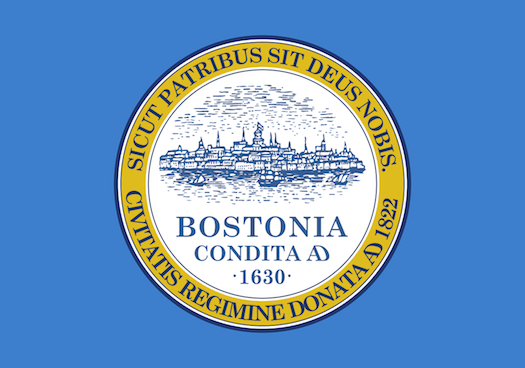 For a town with as much history and idiosyncrasy as any in the country, Boston decided to forgo the idea of a flag and instead run up the pole an FBI film piracy warning. They didn’t want anyone else to copy the idea of “Sox” in their name, but like most movie warnings, someone’s gonna try and bootleg the name anyway. Nobody has, of course, tried to copy Fenway Park, because who would want to? The inscriptions are all in a different language, just like how Bostoners speak. 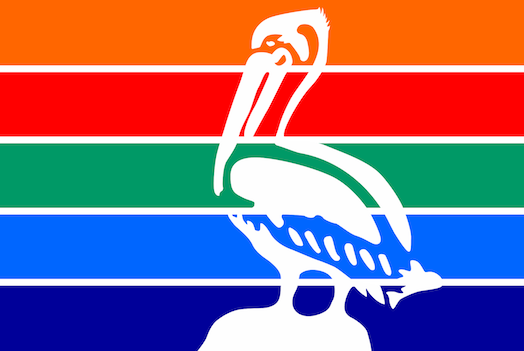 DARK BLUE – Team is happy where they are and looking forwarding to accepting taxpayer money for a new stadium. No cause for alarm.

LIGHT BLUE – Team is searching Airbnbs for Montreal. Again, do not panic.

GREEN – Team announces a French heritage throwback night in July in a city settled by the Spanish. Don’t look too much into this.

RED – Team is announcing they are designating the entire starting pitching staff (two in all) and outrighting them to their new practice facility in Sherbrooke, Quebec. Why are you obsessing over this? 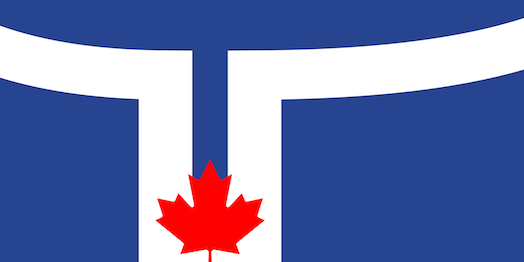 The goal here was to hit all 30 flags. Unfortunately there is nothing to comment on until we find the perpetrators that replaced Toronto’s flag with an unnecessarily zoomed-in part of the back of Jose Bautista’s jersey. If you know of the flag’s whereabouts, please contact the son of a former ‘90s All-Star. Odds are it will get to the correct people. 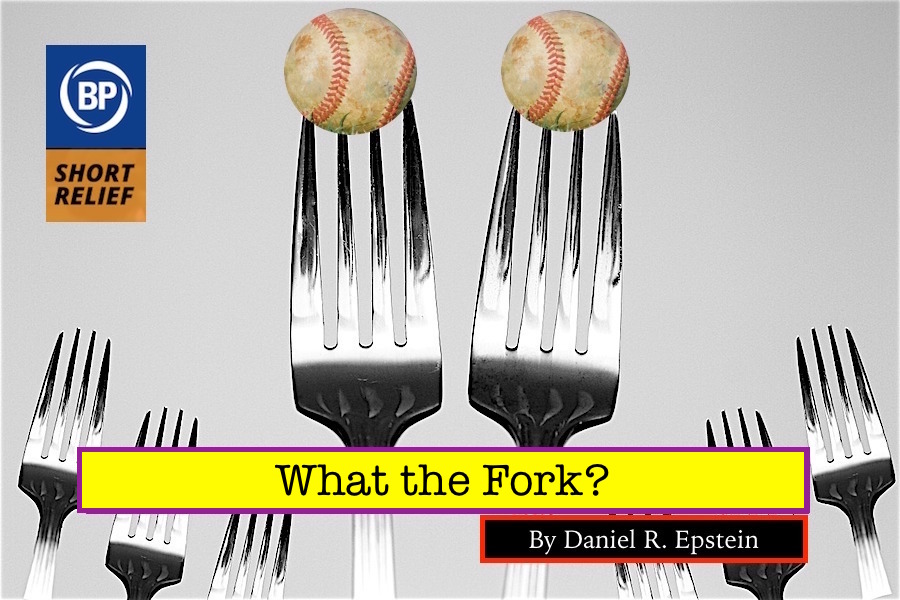 Upon learning of new pitching acquisition one catcher texts another…

Starting catcher: you hear the news?

SC: We got this new pitcher

SC: No NOT good! Did you hear anything about him?

BC: Uh… alright. He’s a pitcher bro we’ll work it out.

SC: You ever catch a forkball before?

BC: Nah what even is a forkball

SC: Siri says it’s like a splitter and a knuckleball! Those are the two hardest pitches to catch! We are gonna have ALL the passed balls! This sucks!!!!

BC: They shoulda called it the spluckler hahaha. Ask Siri how to catch it

BC: Ur kinda killing my offseason vibe rn broski

SC: I asked Siri how to catch a knuckleball. Gave me this

SC: this is not funny

BC:Whatever we will figure it out in February man

SC: I don’t even know what a forkball looks like. Asking Siri hold on.

Elroy Face will tell you, then show you. pic.twitter.com/CRi7EvybDd

BC: DUDE WHAT IS UP WITH THAT GUY

SC: I dunno his eyes are buggin me out tho. Is that what happens when you throw a forkball??? 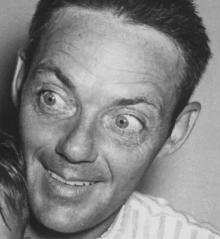 BC: LOLOLOLOLOL HAHAHA HIS NAME IS FACE AND HE LOOKS LIKE THAT LOLOLROFL

SC: Serious tho what we are going to do

BC: That’s in season problems can’t worry bout it yet my guy

SC:: Im gonna crush a few five hour energies and work out. Gotta get ready! This could be rough