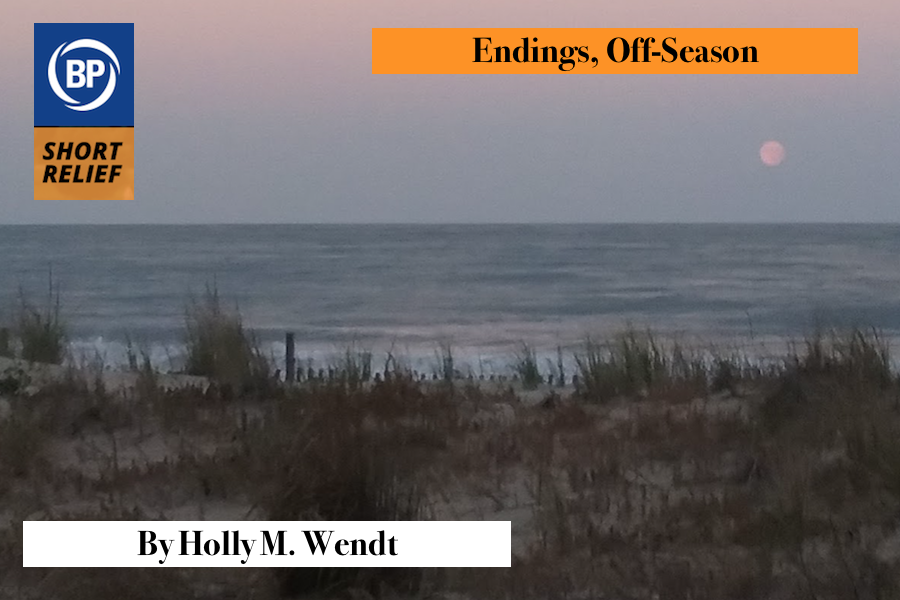 On the coast of Delaware, the season was long over in mid-October. Up and down the boardwalk, metal shutters closed off every third shop or snack bar, and it was easy to find ways between and past the amblers on the weathered wooden boards. That particular weekend, Rehoboth Beach hosted a greyhound convention, and the dogs and their people wore heavy jackets against the threat of fifty degrees, light rain. I was glad to have brought gloves, umbrella, a big scarf, but I recoiled against the idea of the shiny down jackets passing north and south. Not yet, please, not yet. Back home in a landlocked place, there had already been mornings when I saw my breath, and there had been nights watching baseball being played in other places where the players exhaled their own fog, necks and ears and forearms more covered.

It was strange to step out into sand so cold, strange to stay so far back from the water. I would rather have come here in high summer, all sun and heat, but we didn’t really come for the beach. We came so we weren’t at home, where a cushioned little bed still sat beside my desk and mouse-shaped toys with feathers for tails lay under the couch and there was no cat to ignore all these things in favor of a lap, in favor of sitting in the middle of the kitchen like a sweet, stubborn talking stone. On the day we had to say goodbye, there were four baseball games, four series still going. The next weekend, there were only two, and we ran away from the empty spot on the sofa.

We didn’t bring beach chairs or blankets or anything like that. We walked with slow touristy interest past shops selling bright glass balls that begged to be thrown, through neighborhoods of opulent houses standing off-season empty and dark. We turned five dollars into quarters and went into two small arcades because the big one was closed for the season, too. Five dollars became cheap skee-ball and expensive pinball and electronic beer pong wherein there’s no beer and it became baseball. To play Baseball Pro, you pull back a plastic bat on the console and release it just right, and then inside the machine, in the parts you can’t touch, another bat meets a little ball. If you make contact, the ball flies and lands for a hit or it doesn’t; the designations change. The machine dispenses tickets for runs, and our five dollars-plus-various-talents meant enough tickets (400) for two little packets of candy. In a case behind the baseball machine, baseball cards. A signed Maikel Franco rookie card from the Topps GQ set cost 27,200 tickets. We could have gotten it if we spent our five dollars the same way 68 times. eBay offers the same card for five or 25 dollars. The question is what it’s worth. The question is what you get from the time spent. These are questions that aren’t about a baseball card, and I don’t have answers for any of them. We walked and ate our candy and looked at the water and checked the Nationals-Cardinals score.

When it was time to drive home the next day, we left early enough to be able to watch Game 2 of the ALCS. It wasn’t that we’re so interested in New York or Houston. I knew I’d fall asleep on the couch, curled around a spot nothing will jump into, long before the game is over. I know the season ends — has already ended — the way each one does, but I am never ready to say goodbye. 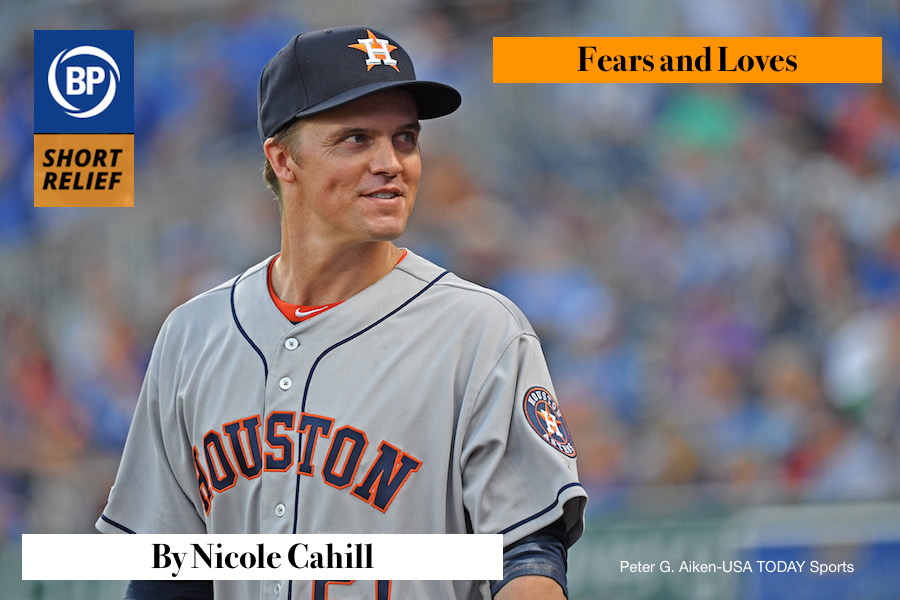 It takes strength to admit your deepest fears and your deepest loves. In the world of sports, this isn’t done as much as it could be. For many of us, baseball is more than just a game we turn on every once in a while to escape from reality. It becomes, at least for me, a part of my daily life. For more than half the year, my nights are filled with something I love. There’s always a game to turn on and distract me from my responsibilities and the thoughts in my head. It’s a constant presence that keeps me grounded. Come the end of September, I realize this constant will soon be gone for a few long, dark months. In this time, there are things I fear and things I love. Paul Gilmartin, host of The Mental Illness Happy Hour podcast, has a segment on his show called “Fears and Loves,” where he and his guest discuss their deepest and darkest fears and loves. He describes the show as “A waiting room that doesn’t suck.” Well, as we all wait through the long and dark offseason, come join me in this waiting room that doesn’t suck.

Fear: During Game 4 of the ALCS, some Yankees fans taunted Zack Greinke by chanting the names of medications someone would take for mental illnesses. Greinke, who is known to suffer from anxiety and depression, has been open about his struggles and said that getting on medication was life changing. In that moment, I wondered how people could be so cruel. I think it’s quite pathetic to use someone’s illness against them in this way. Fans wouldn’t yell “Chemotherapy!” at Carlos Carrasco upon his return from Leukemia. I’d like to think the people chanting the names of SSRIs don’t really understand the pain and suffering that those of us with these illnesses face. I fear that these fans most likely aren’t hurting Greinke, they’re hurting the fans and their friends sitting next to them that are silently suffering.

Love: Baseball gloves. I am absolutely infatuated with baseball gloves. When I played softball as a kid, I would often walk into the sports equipment store and walk down the glove aisle in awe. When I played, I had a weird thing where no one was allowed to touch my glove. It stemmed from my favorite book, The Art of Fielding. That’s another love, I suppose. Loving baseball gave me a whole new genre of books to read. It opened up a world of possibilities.

Fear: Growing up, I memorized the statistics on the backs of my favorite baseball cards. I played wiffle ball with my friends at school and I took pride on being one of the first people picked. I had an abundance of knowledge that seemed to multiply with every season I inhaled. As I grew older, my focus has slightly shifted from less of an analytical sense to more of an infatuation with the game. I now have this huge fear that I will get “found out” for being a lesser fan that I was when I was younger. It’s like I grew, but my knowledge didn’t. I suppose my imposter syndrome is acting up here, or maybe it’s because women aren’t readily welcomed into sports fandom. However you want to categorize this fear, I think it ultimately stems from feeling like I don’t fit in. I don’t know if that’s something that will ever change, but I hope it does.

Love: One of my biggest loves about baseball is that it saved my life. I wrote here before about my recovery journey and how it mirrors the baseball season. I was always an avid baseball fan, but when I was 13 years old, I was in a middle school reading class and got handed a reading packet. In it was a story about Zack Greinke, who suffers from anxiety and depression. I was a struggling kid then. Reading about Greinke and how he overcame his mental illnesses gave me the hope that maybe I could overcome mine, too. It made me want to stay alive. I love that baseball gave me that opportunity. 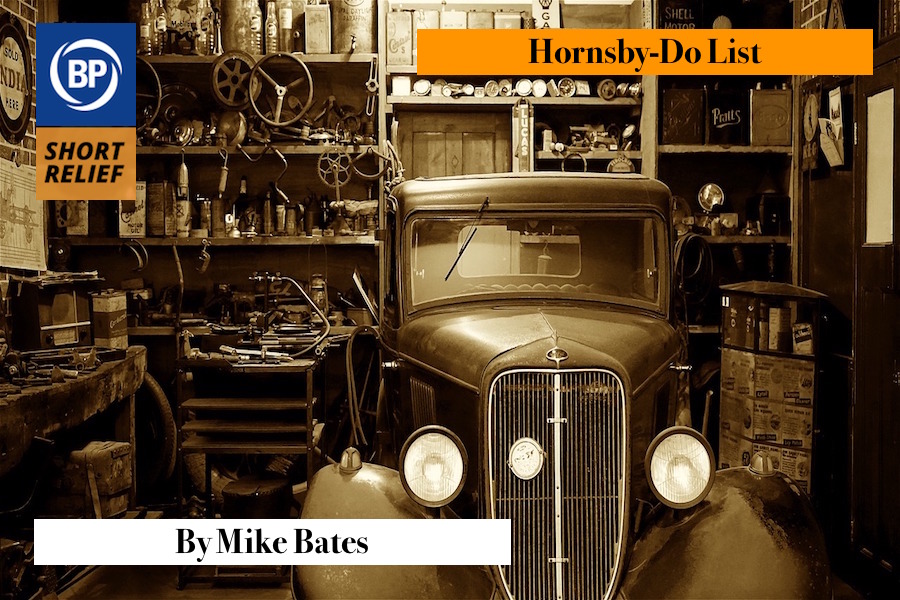 Supposedly, when they asked Rogers Hornsby what he did all winter when he couldn’t play ball, he responded, “stare out the window and wait for spring.” That always struck me as deeply sad. Especially since Hornsby, for the record, had two sons with whom he could have spent that time. Then again, I just spent 10 hours in a car with my two kids this weekend, and maybe I can see where he’s coming from.

Now normally, I would suggest not taking him literally in this case, especially given the oft hyperbolized newspaper standards of the day. But Hornsby was a deeply miserable man with no discernable sense of humor who really only enjoyed baseball, gambling, and making everyone else around him miserable, so maybe it’s not an exaggeration. Maybe he really did just wait around for the season to begin anew.

But the rest of us are, I would hope, healthier than Rogers Hornsby. We have goals and aspirations beyond the game of baseball, and getting an extra three hours a night to fulfill those will go a long way toward making you a more tolerable person by the time, like Hornsby, we are thrust back into the meat grinder that is a baseball season. Here for the record is my offseason To Do List:

Watch Chernobyl – I’m old enough to remember seeing reports on the nightly news about it, though I didn’t really understand what was going on because I was eight. I hear it’s great. At least, that’s what my brother said, and he saw two episodes on a plane back from Mexico City last week.

Clean the garage – Half of our garage is full of the meaningful detritus collected by my wife in her half-a-lifetime before we met. It has sat in the garage for 18 months, and a storage facility for a year before that, and her home office for years before that, waiting for her to dig in. She says she’s ready to tackle it, in the hopes of turning her half of the garage into a place where a car can live.

Take up running – Like most middle-aged baseball writers, I have come to my lack of fitness honestly: sitting around on the couch watching ballgames. This offseason, like every other offseason before it, is a chance to change that. Time to stop using the elliptical machine as a drying rack for sweaters and use it for its intended purpose.

So, let’s see…that’s watching a super depressing TV show about a horrific tragedy and coverup in a totalitarian nightmare state, a bunch of chores in a cold Iowa garage, and actual exercise. Maybe Hornsby was right all along.