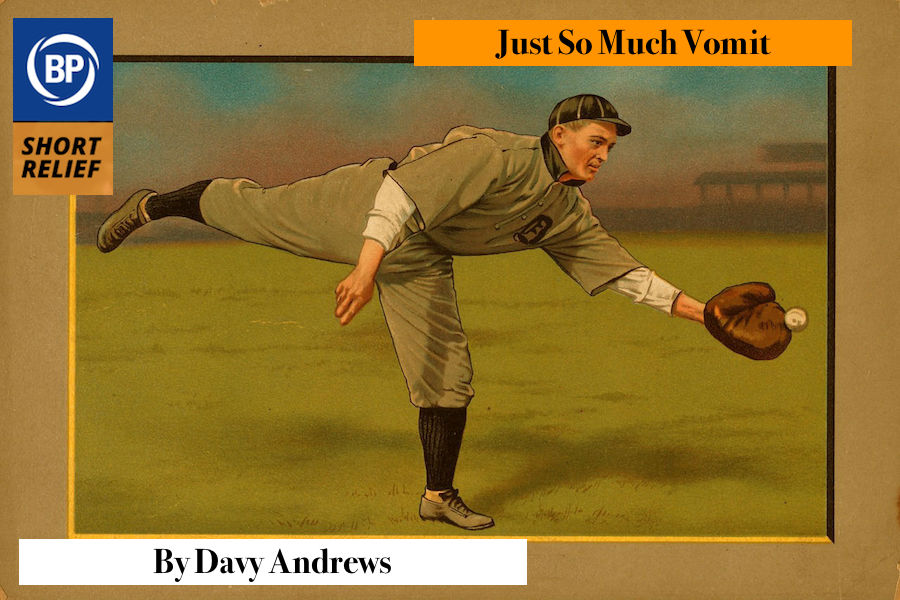 From the infield fly rule to the designated hitter, the rules of baseball are always evolving. In earlier iterations of the game, the defense could record an out by throwing the ball directly at a baserunner. It was an actual, real thing that I did not make up. This delightfully violent act went by the cheery name of “soaking.” Let’s use it in a sentence, shall we? Tom tried to stretch a double into a triple, but the left fielder soaked him in the head and now he is dead.

Inspired by this charming anachronism, come along as we review some of the other oft forgotten, slightly more fictional, gems from the rulebook of yesteryear.

You probably remember the dizzy bat race from field day in elementary school, but it was originally part of America’s pastime. Before running to first base, the batter had to spin around thrice with his head on the bat. The rule was lifted in 1917, due to an incident involving a supremely hungover Babe Ruth and what the Boston Herald described as, “just so much vomit.”

Did you know that extra innings weren’t invented until 1879? Until that point, tie games were decided by tickle fight.

While illegal in most municipalities, gunning down a base stealer with a flintlock pistol, as depicted in the movie Hook, is technically not against the rules of baseball even today. In fact, if you do so in the state of Texas, you are immediately awarded a free platter of ribs and sworn in as a state senator.

Well into the 1940s, diving for the ball was strictly prohibited on the grounds that it was ungentlemanly. In game three of the 1908 World Series, after Ty Cobb famously went to a knee to corral a bouncing ball, umpire Bill Klem called time out and gave him a firm talking to. Cobb remained, as we all know, a perfect gentleman ever after.

The curveball faced a winding road to widespread acceptance. Between its first documented use in 1869 and its 1880 enshrinement in the rulebook, several of its purveyors were suspected of witchcraft. Punishments ranged from an awarded base on balls to burning at the stake. After a particularly devastating outing against the New York Highlanders, noted curveballer Launcelot McCullers was heard as far away as Delaware shouting, “Has nobody here heard of the Magnus Effect? Spin rate? It’s just physics!” as the chair to which he was tied sank slowly into the Hudson.

Have you ever wondered why old-timey baseball players always look so dour in photographs? Why there are no jovial shots of Honus Wagner or Walter Johnson? Because until 1917 it was against the rules to smile on a baseball field. “Shoeless” Joe Jackson in 1915 smirked slightly while rounding the bases after a walk-off home run (or, as it was known at the time, a match-conclusory wallop). He was forced to surrender to the commissioner both his baseball spikes and, less famously, his firstborn son. He never smiled again.

Baseball has a long history of headhunting. Throwing a potentially lethal fastball directly at the batter’s head as retaliation for any slight, real or perceived, was long considered simply a part of the game. Punishment, if it came at all, took the form of a short suspension. This barbaric practice continued up until the — wait…still? Really? 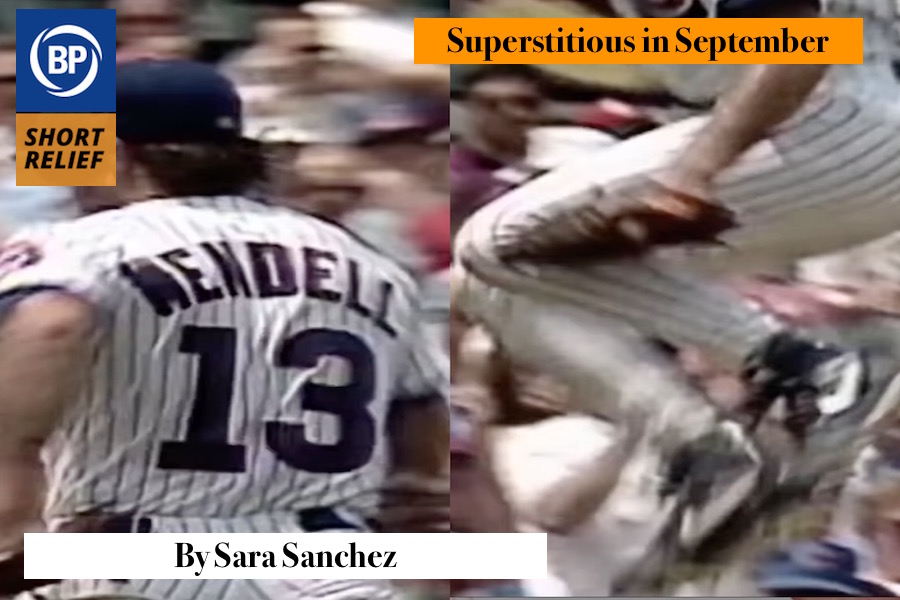 I’ve been postponing getting my hair done despite loving my stylist. She does an incredible job. I always love the end result. In fact, I often wind up making plans for that night even though I’m a homebody because it seems like it would be a waste to sit on my couch with a perfect blowout.

The process is daunting, however. My hair is practically waist length. It takes at least two hours to get my hair done from start to finish. I can almost always think of a better use of two hours than spending that time on myself. Don’t even get me started on the price.

I might have broken something if I wasn’t in public, but honestly I didn’t have time to even really think about that. Within 10 minutes of being down four they were up five and put a 17 spot on the Pirates in a must win game in September. It wasn’t much of a leap for me and most of Cubs Twitter to decide my hair stylist was lucky.

I think we can all agree that whatever rules normally hold around stats and superstitions clearly go out the window in September. Baseball players are no strangers to superstitions. Apparently pitchers have a thing with food, specifically the food they eat before a start. Ryan Dempster ate at a particular Italian restaurant before starts. Current Cubs reliever Derek Holland was known to order $30 of Wendy’s before starts with the Rangers. The mind sort of boggles at what one could buy with $30 at Wendy’s. It’s almost tame by comparison that Jim Palmer ate pancakes before every start.

If I’m being honest, food superstitions are beyond tame. After all, Jason Giambi, Derek Jeter and Johnny Damon apparently swapped a magical gold thong when they were going through hitting slumps. Jeter admitted it was less than comfortable when running the bases.

But no one compares to Turk Wendell. Wendell was a reliever who pitched for the Cubs, Mets, Phillies and Rockies during an 11-year career in the majors. I’m going to list a few of his superstitions — this list is not exhaustive. Wendell chewed black licorice while pitching. Four pieces of it, to be precise. But don’t worry about his teeth. He brushed them between innings. He had such a thing with the number 9 and not only wore 99 that he signed a 3-year $9,999,999 deal with the Mets. Like many ballplayers he didn’t touch the foul line; unlike many ballplayers, he seemed to hop ten feet in the air to avoid them. Oh, and my personal favorite — he had umpires roll him new baseballs rather than throw them.

There are no $30 Wendy’s orders or black licorice in my future, but if the Cubs need one more win down the stretch I may pay my hairstylist one more visit, regardless of time and price. 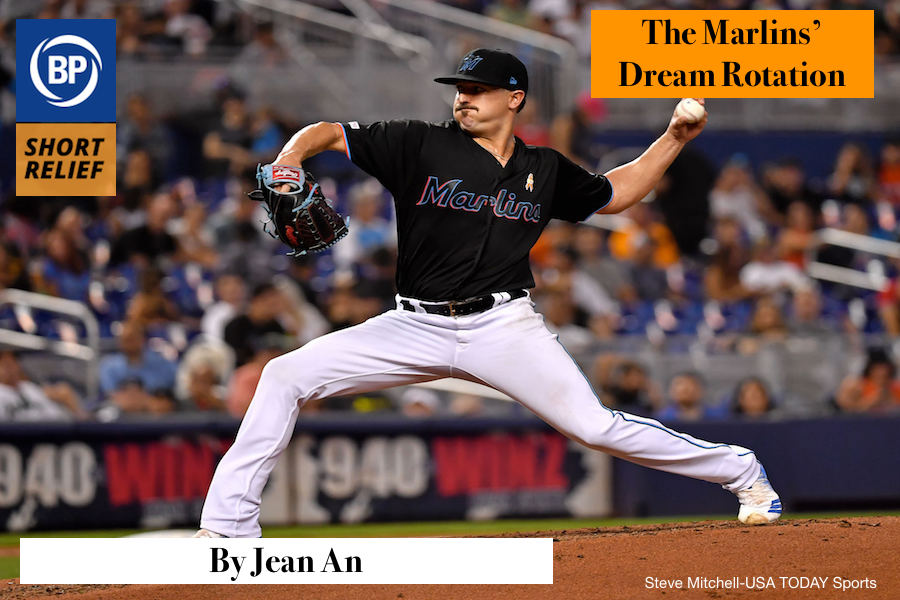 “Swing and a miss! Twelve strikeouts on the night by Luis Castillo, eight of which coming on the change-up! What a dominant performance!”

After seven scoreless innings, Castillo slowly walked into the home dugout, where he was showered with high-fives from his teammates, including fellow starters Chris Paddack, Domingo Germán, Caleb Smith, and Anthony DeSclafani. The three star outfielders — Marcell Ozuna, Christian Yelich and Giancarlo Stanton — arriving late as they jogged in from the outfield, also gave Castillo congratulatory words.

As long as the bullpen can close out the remaining two innings, the Miami Marlins would clinch the first division title in their franchise history. The celebration would certainly be memorable, but all the players and fans know that this team is destined for something greater than a mere postseason berth, and there will be more celebrations in October.

At this point, we have all heard the stories about how this analytically-driven front office has managed to build such a powerhouse team. Every trade they have (or have not) made, every free agent they have signed (or passed on), every prospect they have drafted and developed, or even the insignificant waiver claims, it seems like almost every button this front office has pushed has led to a piece in the puzzle of this soon-to-be 2019 NL East Champion.

Ace starter Castillo came in a minor trade back in 2014, when the Marlins shipped veteran third baseman Casey McGehee to the San Francisco Giants. Perhaps a co-ace, rookie starter Paddack, came in the 8th round of the amateur draft in the following season. The two of them have put up 62 and 66 DRA-, respectively.

The two of them are followed by three above average starters. Germán, who the Marlins reportedly were close to trading to the Yankees back in 2014, has developed into a great mid-rotation piece, with an 85 DRA- and 2.5 WARP. Smith, who they snagged away from the Yankees – along with first baseman Garrett Cooper – in a trade in 2017, has also contributed (86 DRA-, 2.4 WARP). Lastly, DeSclafani was a prospect they acquired from the Blue Jays way back in 2012, and has rewarded Miami with an 83 DRA- and 2.9 WARP contribution.

With this dream rotation combined with their already formidable line-up, the Marlins have managed to emerge atop the competitive NL East. Had management not been patient, likely none of this would have occurred. Perhaps there was some good luck involved in the process, but this is now a completed team ready for the challenges of postseason baseball.