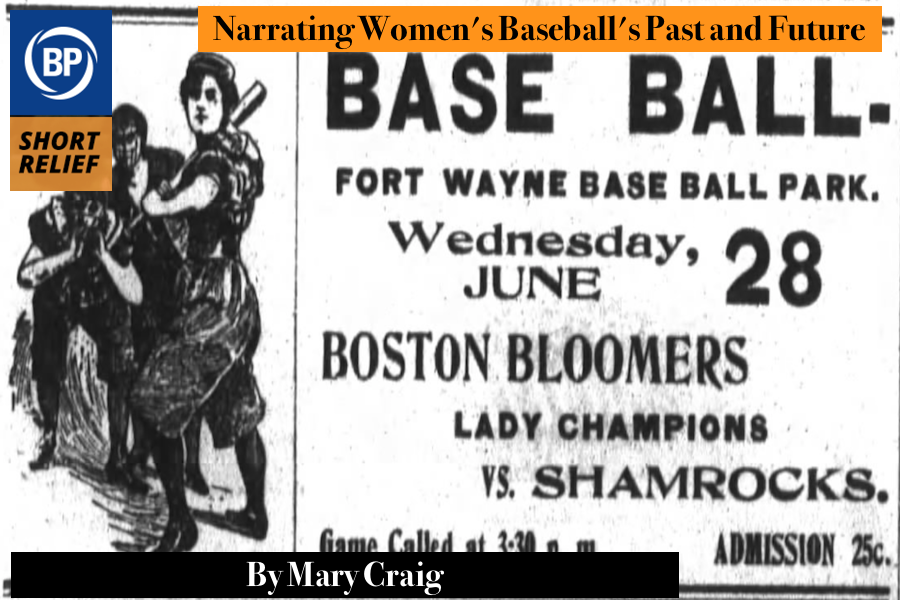 It is a rare occasion when a woman gets to be in charge of her own narrative. More frequently, women’s stories when they’re told are done so through the eyes and voices of men who have a vested interest in telling only those parts which do not threaten their power. Our collection of stories as a result remains incomplete, devoid of characters and narrators.

Women began playing baseball at much the same time as men, but their presence was not advertised for years. When it became evident that despite every effort on behalf of their husbands, neighbors, and communities that women would continue playing baseball, newspapers reluctantly threw a few lines per week in their direction. Throughout the 19th century, baseball was inappropriate for women, both as athletes and spectators. Ballparks were rowdy, full of debauchery, no place for the delicate sensibilities of the fairer sex whose presence would breed further corruption of the men in attendance. Playing the game itself was too violent and strenuous; women would almost certainly injure themselves running the bases or throwing the ball. Many ballparks and amateur teams banned women, for their own good, of course.

Women continued their relationship with baseball nonetheless, sneaking into games, climbing rooftops to watch from across the street, and forming their own teams. It became apparent that warnings and legislation would not deter them, so men switched the narrative. Playing baseball was suddenly good for women; it would build character and strength along with femininity. Allowing women into games would help their brains develop and attract more men as spectators.

Newspapers began to cover women’s games in more detail, emphasizing the players’ appearances and noting their skills were almost as comparable as a man’s. These games were advertised as a spectacle, a-once-in-a-lifetime opportunity to witness something unnatural. However serious the women took these games, newspapers made sure to advertise them as being akin to circus performances. Women could finally have some space in baseball, but only one granted to them by men.

Even when women began playing professional baseball, they could not do so on their terms. They faced constant pressure from their team owners to present wholesome images, meaning adherence to the narrowest conception of womanliness. Their athleticism and skill were distant seconds to ensuring they looked as women baseball players should look. After almost a century of participating in baseball, women were no closer to doing so on their terms.

Throughout the decades, women have had to fight to be granted the privilege of enjoying baseball, gathering up scraps thrown their way and always demanding more. They took the spaces given to them, restricted as they were, all the while trying over and over to enlarge them, to take control of their own stories. At every turn, women in baseball have fought to redefine what it means to be a woman.

With each new woman in this community, paragraphs are added to incomplete stories and new ones are drafted with the purpose of revealing the truth about who women are and what women are capable of. 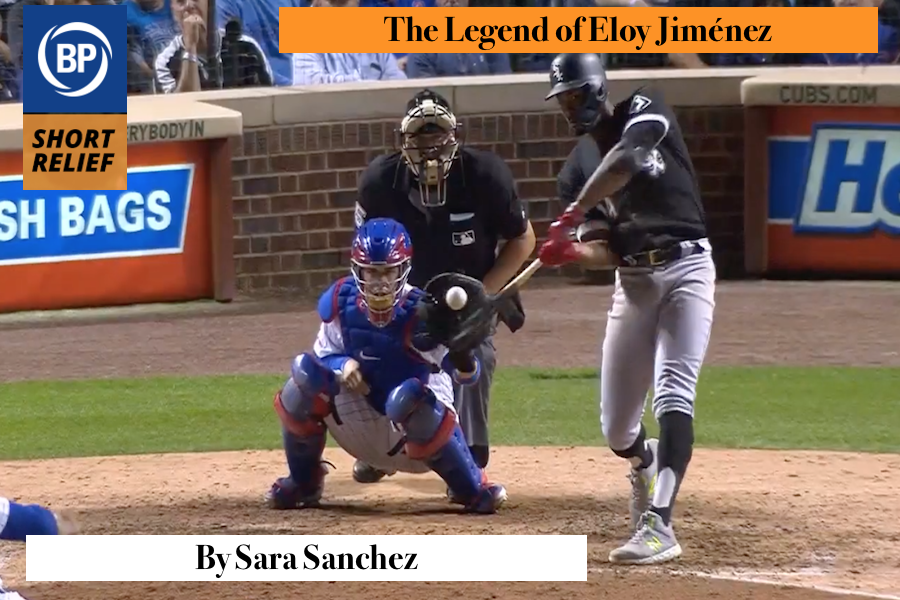 He was a star years before he played baseball in Chicago.

The hype around his signing as the top international prospect in 2013 was palpable and more than welcomed in Chicago, a year when the White Sox lost 96 game and the Cubs managed to only lose 99. Eloy was a 16-year-old prospect you could easily see on a baseball team that wins 100 games without breaking a sweat.

As the 2016 season progressed well for one of the Chicago teams, the kid continued to shine in San Diego at the All-Star Futures Game. The 19-year-old who wasn’t known for his defense made an acrobatic catch that nearly sent him over the wall in right field. Two innings later he decided to smack a towering home run into the Western Metal Supply Building.

On June 19, 2017, the Cubs’ top prospect hit a home run in the Class A Advanced Carolina League’s Home Run Derby that probably would have left Earth’s orbit if it hadn’t run into a light in left field. While it was compared to a moment out of The Natural this wasn’t Roy Hobbs – it was just another moment of Eloy being Eloy. More than a year before he’d play his first major league gam,e Eloy Jiménez was already approaching legendary status in Chicago.

Because baseball is the cruelest sport and trade season will always tear a fan’s heart out, less than a month later Eloy was traded to the Cubs’ crosstown rivals, along with three other prospects, for left handed pitcher Jose Quintana.

The teenager who gave Cubs fans hope three years before the hope became a reality would finally walk to the plate for his first major league game at Wrigley Field as the starting left fielder of the Chicago White Sox. He strode to the plate with a runner on first and the game tied 1-1 in the ninth, as both halves of the city held their breath to see what the rookie with a penchant for a big moment would do in this storybook spot.

He hit a towering home run into the left field bleachers, of course. Fans and commentators would later argue that they’d heard his bat break on the game winning home run, but honestly, it’s possible they just heard the sound of a million broken hearts across the North Side. A city witnessing another part of the Legend of Eloy Jiménez. 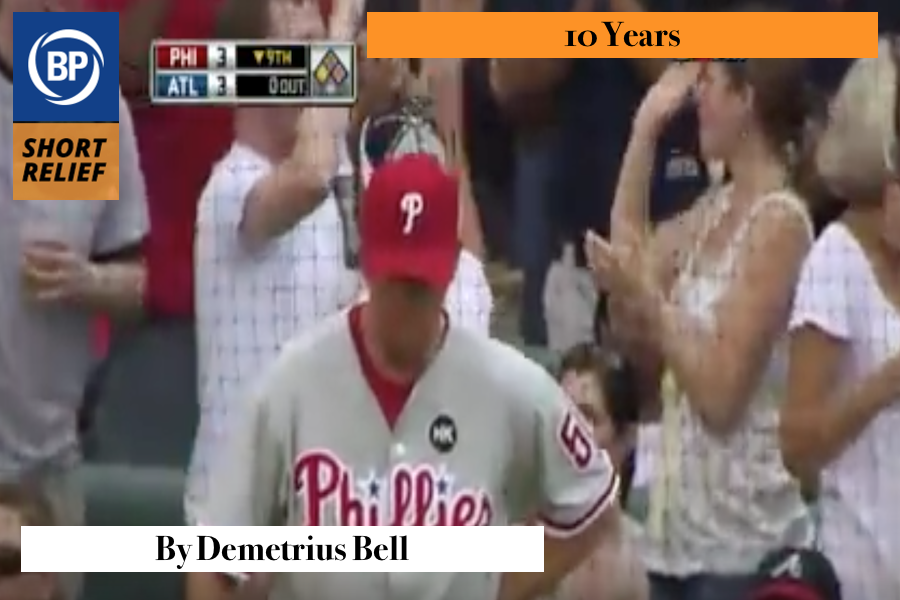 Would you happen to remember what you were doing on Saturday, August 15th, 2009? Unless that was a monumental day in life for you, you probably don’t. I had no clue what happened on that day up until this past Saturday night. That was when I was inadvertently reminded by a Japanese spam bot on Twitter of exactly what I was doing at 7:15 PM local time on that particular day – watching the Braves play the Phillies.

Judging by what I had tweeted back then, something crazy must have happened. This crazy event occurred near or at the end since the game started at around 4:00 PM. The first thing I did was try to find some video of what happened. There’s proof that something crazy happened, since the description of this video is simply “Crazy.” Unfortunately I’ll have to take their word for it since the video has aged like a slice of Domino’s pizza that was stuck in the back of the refrigerator for five days.

So I decided to turn to Baseball-Reference in order to form a mental image of what happened. Atlanta went into the bottom of the ninth down 3-2. They ended up walking it off after the Phillies had an absolute misadventure in the infield. The Braves tried to give them an out, but Brad Lidge committed two errors on one play, and one run scored while Matt Diaz made it to third on a sacrifice bunt attempt. Then Omar Infante brought home the winning run on a “Ground Ball thru Weak 3B.” I was determined to find a clear video of this, and eventually I did. It was as underwhelming as I expected it to be.

The biggest change is that I’m actually following a dream that I’ve had since I was a kid, which is a long way from where I was in 2009. When I watched the 2009 Braves game I followed it up by doing a lot of nothing. Now when I watch a game I sometimes get to write a recap for other fans to read. It might not be a huge deal, or something to really celebrate, but it’s something that I never imagined I would ever be doing.

This makes me hope that things will continue to change for the better. Maybe in 2029, I’ll look back on the summer of 2019 and reflect on how far I have come since then. Hopefully the quality of fan-made video will keep on improving too.