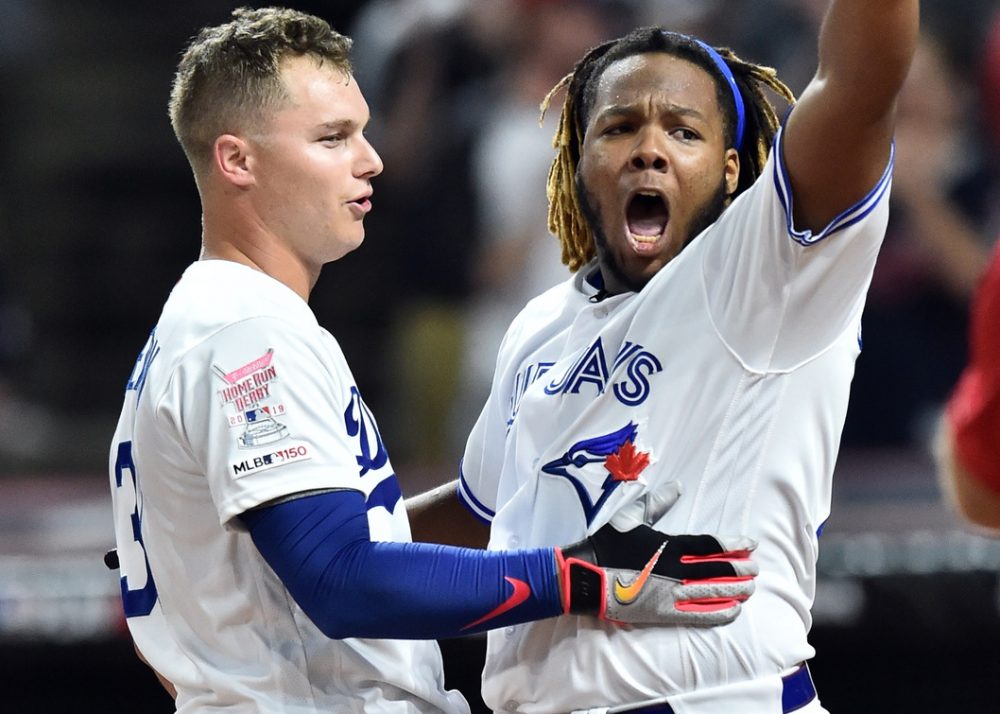 To the people who steadfastly refuse to concede to the idea of a pitch clock in the major leagues, let me pivot from telling you how seamlessly it works in the minors to advocate from a different angle:

Think about how much better the Home Run Derby is with a clock. Do you remember it before? How awful it was? The literal pace of play as we watched guys who weren’t Peter Alonso’s cousin throw acceptable pitch after acceptable pitch only for the batter to not swing, as they didn’t want to chance an out, all while Chris Berman consulted physical maps to name neighboring cities and townships. It was absolutely atrocious and I will not hear otherwise.

This? With the clock? Par excellence. Do I understand that a showcase event and an actual game are different? I do. Do I also understand that the pitch clock and HRD clock get to the same issue in regards to pace of play? I do.

Vladito vs. Joc was one of the purest displays of raw power and fun that we’ve had in quite a while, and managed to outdo the fun of Bryce Harper’s race to defeat Kyle Schwarber in front of the home crowd last year. And for those of you trying to invalidate Harper’s title because he received a pitch before the prior ball landed, or using that to discount what happened on Monday… please for the love of god grow up. It’s a spectacle! We’re here to have fun and honestly that rule is boring and makes no sense anyway. Swing as many times as you can within the time limit and hit as many majestic home runs as possible, forget the rest!

No one cares about when the next pitch is thrown when they’re trying to calibrate their senses following the thunderous result of the lightning in Vlad’s wrists: a rolling, rumbling barrage of home runs precipitated each time by a blinding, flashing crack of thunder. And trust me, no one in the crowd minded when each pitch was thrown while Pederson was racing the clock, firing off mortars down the pull side and sweating like an unwilling participant on the Maury Povich show, stirring the crowd into frenzied roars with each recurring tie that didn’t die down until mid-way through Ronald Acuña’s following round.

And speaking of the spectacle of it all…can we please get rid of the people requesting bunting competitions in place of the home run derby? PLEASE? I promise you, you don’t want a bunting derby. You’re like the people on Tiny House Hunters that are looking at tiny homes and then describe what they want (pets, a practice area for their eight-piece band, to entertain, space to THINK FOR ONE GODDAMN SECOND) and what they’re actually talking about is in fact not a tiny home but, instead, an apartment. What people who want a bunting competition want is actually curling, or maybe shuffleboard. They’re great sports and I suggest you look into them because they’re fun as hell.

What bunting competitions are not is entertaining in person or even a real demonstration of skill, because you’re not talking about bunting a breaking ball thrown with the intent to miss bats or a two-seamer running in on their hands. And for those of you saying “neither is the home run derby!!!!11!1!” Yeah! You’re right! It’s not a skill competition, but it is a visual delight, captivating the crowd and those watching from home with remarkable demonstrations of strength and bat speed. Your jaw drops when Aaron Judge or Giancarlo Stanton or Vladimir Guerrero Jr. gets ahold of one, and it’s not voluntary. That’s not happening in your bunting derby, which is why your bunting derby isn’t happening.

While the offensive fireworks didn’t carry over from the year prior, this year’s rosters were really good, and the game featured so much prospect talent on one field it was almost overwhelming. It’s a real shame the league decided the exhibition should only be seven innings, but at least Sam Huff decided it would be eight. The Futures Game is the main reason I’ve gone to the All-Star Game festivities each of the last two years and, while my interest with prospects is different than the larger public’s, it seems insane to me that the league isn’t doing more to promote its future superstars.

I do think that placing the Futures Game behind the Celebrity Softball Game was a good move by the league, in that the latter is more well attended, and it allowed people to stay in their seats and hang around for the former. I do think this increased attendance, and allowed the Futures Game to be broadcast without competition from any MLB games, which is obviously a significant benefit. Still, limiting the game to seven innings prevents us from seeing the same number of prospects and with 10 pitchers allotted per team, averages out to just over two outs per pitcher. We should be getting these guys as many at-bats and innings on a large stage as possible, and while I applaud the league for the decision on time slot and scheduling, let’s treat the game with the level of marketing and emphasis that it deserves.

Sun’s out, guns out pic.twitter.com/URCSQl6yUq

Candid response from Michael Chavis when asked how the Red Sox can turn their season around: "I’ve been in the big leagues two months, bro. I have no clue."

First ever ball GIRL for the New York Yankees – An absolute honour to work for the @Yankees and warm up Brett Gardner. What an amazing experience on this historic weekend, thank yo @mlblondonseries ⚾️ https://t.co/KETecmxPGO