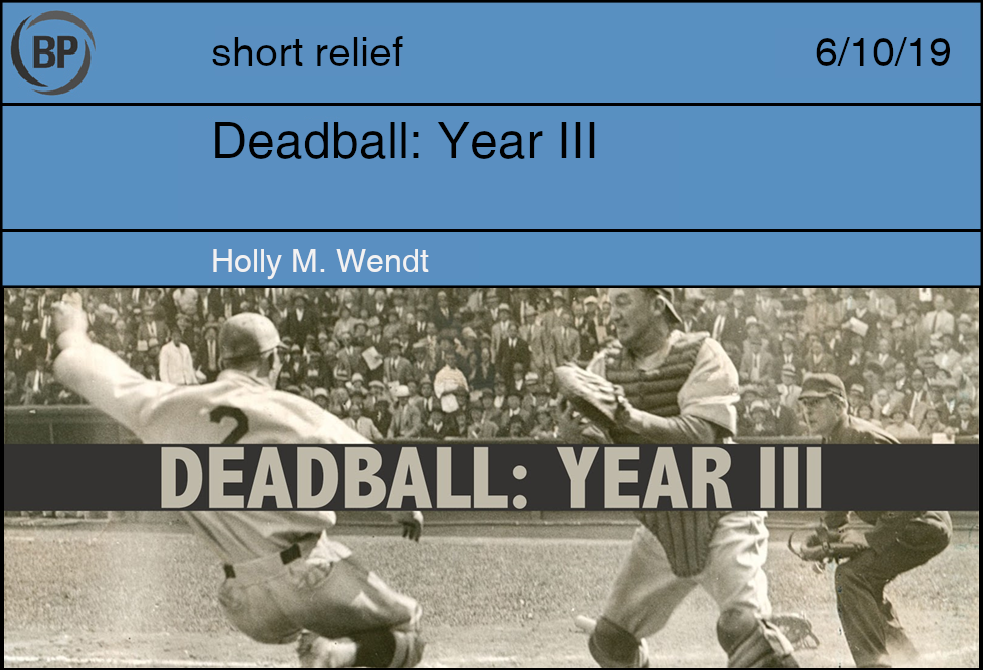 The circumstances of the Black Sox scandal of 1919 have generated a plethora of richly imagined reiterations, from the iconic Eight Men Out to the fanciful and forgiving representations in Shoeless Joe and its Hollywood adaptation, Field of Dreams. W.P. Kinsella’s Joe Jackson carries no taint of treachery, and even the apparent architect of the fix, Chick Gandil, appears in the film as a tough-talking but ultimately genial fellow. Of course, both Kinsella’s novel and the film have redemption at their hearts—neither is particularly concerned with the rift the Black Sox tore in the sporting world. Their aim is closer, familial and familiar, but that’s not, of course, the end of the story. 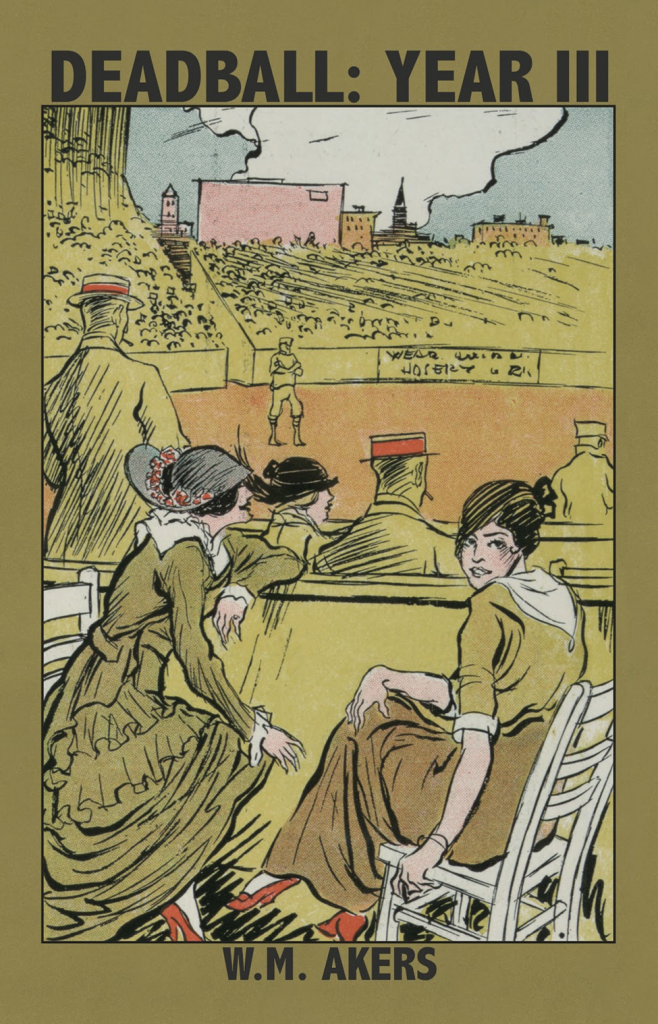 In a follow-up to Deadball: Years I and II, W.M. Akers brings us Deadball: Year III, which offers new ways to engage with—to tell and retell—that story. As Akers describes it, this update is “inspired by the hundredth anniversary of the 1919 World Series and is all about the cheats and scoundrels that make baseball fascinating. It introduces rules for playing a series where one or more players are losing on purpose, giving fans a chance to put themselves in the heads of the Black Sox as they try to throw the biggest games of their lives.”

This is to say: in the same way that thieves and rogues are the most fun characters to play in a Dungeons & Dragons campaign, Deadball: Year III allows for the underhanded and the dishonest to be part and parcel of the play. Deadball: Year III also includes modifications for the original game to play in the Steroids Era; if we’re going to flout the rules, let’s break all of them.

It’s exciting to see Akers’ project evolve and revel in the imaginative capacity of “baseball with dice.” What might seem a simple product of a scoresheet and a handful of arbitrary numbers that signal certain on-field results is a backdrop for the rich embroidery of the mind, a participatory storytelling that can be replicated half a dozen times in the space of a real-life baseball game. The careful and thorough mechanics of Deadball: Year III are no surprise, though. Akers’ new novel, Westside, is an intricately imagined and wildly entertaining alternate vision of New York in 1921. In Westside, tiny mysteries—and not-so-tiny mysteries—send protagonist Gilda Carr on an adventure through a city rendered both strange and familiar. She dodges villains and various skullduggeries; she reminisces about the Giants. Even in the novel’s dire circumstances, baseball stands as a touchstone of normalcy and order. In the game, Akers shifts expectations: the dirt and grass and sportsmanship are not so solid. You’d be right—and delighted—to be suspicious.

(The Kickstarter for Deadball: Year III is in full swing and headed toward its stretch goals. Check it out!  Get Westside here.) 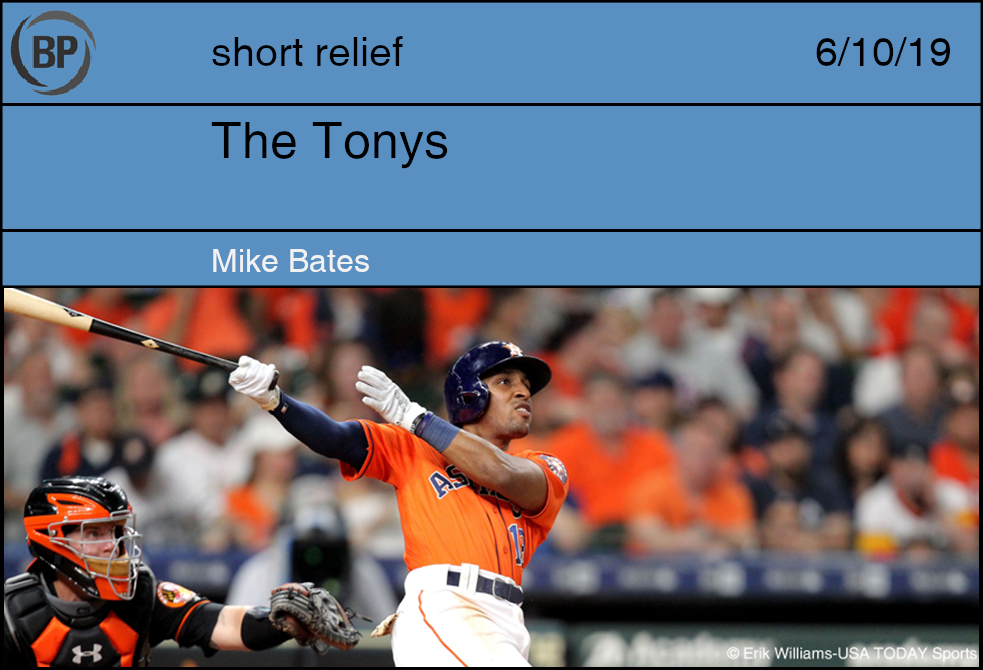 I am attending a Tony Awards party tonight (Sunday) in spite of the fact that I didn’t know anything about what’s currently on Broadway or who the nominees were before my invitation two days prior. I poured myself into learning as much as I could before the festivities so that I could at least have rooting interests and predictions if asked. On a related note, if Ain’t Too Proud wins for Best Original Musical, I’m going to lose it in front of a bunch of people I don’t know very well, because you can’t just slap a plot around a bunch of Temptations songs and call that a musical. I will not (now) accept that.

But I digress. I still know far too little about tonight’s proceedings for my liking, which is why I’m happy to present Tony Awards for the one thing I do know a fairly reasonable amount about. I present The Baseball Tonys:

Best Leading Tony
Tony Gwynn
No one ever defined a franchise more than Tony Gwynn defined the Padres, from their surprising AL West crown in 1984 through their NL Pennant in 1998. While the sabermetric crowd has deemphasized Gwynn’s excellence in recent years in order to promote Hall of Fame candidates they want inducted, there’s no question that he’s an inner-circle guy.

Best Supporting Tony
Tony Phillips
Wherever you put Tony Phillips on the field, he was an asset. He is the greatest super sub of all time and was exceptionally valuable to an aging and brittle Tigers team in the early ‘90s that always had at least one hole open.

Best Tony No One Remembers
Tony Mullane
He was The Adonis of the Box from 1881-1894, a remarkably long career that spanned the era where pitchers threw underhand and had to put the pitch where the batter requested it. One of the last great 19th century players not enshrined in the Hall.

Best Revival Tony
Tony Armas Jr.
Tony’s dad was an outfielder for the Red Sox and A’s in the ‘70s and ‘80s who was blessed with an incredible arm and monster power. Little Tony got one of those, though injuries cut his career short.

Best Directing Tony
Tony La Russa
For as joyless and old-school as he eventually became, Tony La Russa was a rebel and an innovator in the ‘80s and ‘90s.

Best Limited Run Tony
Tie — Tonys Kubek and Conigliaro
We’ll never know what might have been. Kubek had to retire after 1965 when doctors found an old football injury to his spinal cord. Conigliaro’s career was irreversibly altered when he was hit in the face by a pitched ball in 1967. The damage to his eye was extensive and, while he would come back, was never the same player again.

Best Tony Who Wasn’t Even a Tony
Tony Oliva
Born Pedro Olivo in Cuba, Tony used his younger brother’s birth certificate when he immigrated to the United States supposedly because his paperwork was already in order to leave the island. 59 years later, everyone still calls Pedro “Tony.”

Best Fictional Tony
Tony Micelli
A former second baseman for the St. Louis Cardinals, Micelli injured his shoulder in a botched steal attempt and retired sometime in the early ‘80s. He spent several years, with his daughter, as a housekeeper for a upwardly mobile divorcee, her son, and her sex-positive mother in Connecticut. 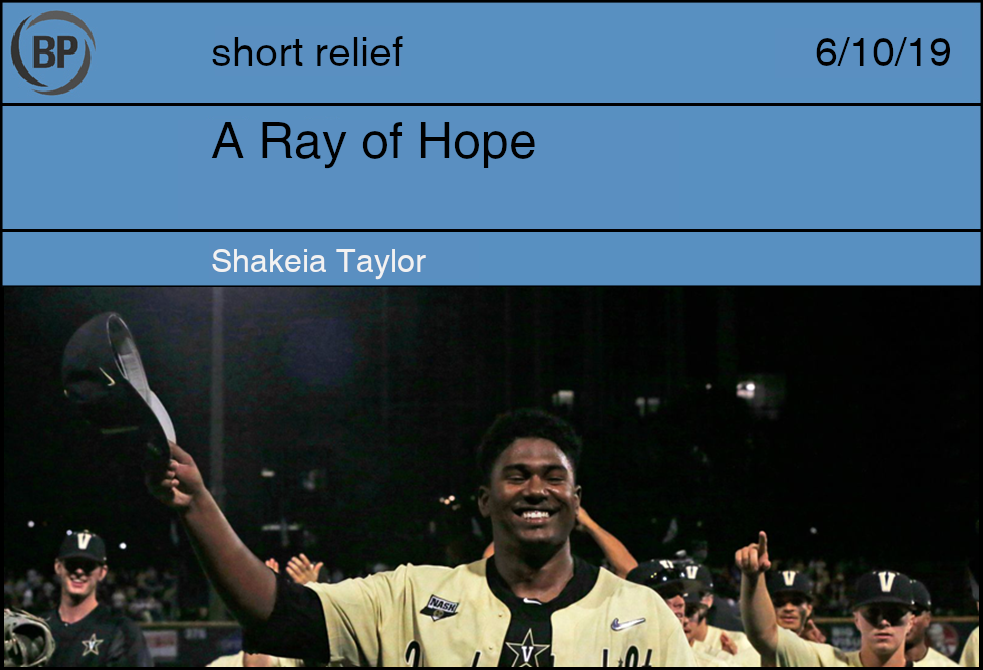 If you’ve ever known anything about me, you should know how I feel about the preservation and celebration of Black baseball history. And at just 19 years old, Kumar Rocker did something noteworthy this past weekend.

Rocker, a freshman pitcher at Vanderbilt, threw the first no hitter in NCAA Super Regionals history; the 8th in tournament history. Despite walking two and hitting another, he struck out 19 and threw 131 pitches to keep his team’s College World Series hopes alive. What was most impressive to me, was how Rocker stayed focused and kept his head in the game. He didn’t let the walks or HBP shake him, and when Duke tried to rattle him with a fake conference, he struck that guy out too. After striking out the side in the 9th, Rocker stood stoically as his teammates mobbed him in celebration of him being a total badass. Incredible.

Admittedly, I don’t follow much college baseball, but I was all too excited to be alerted by my friends to check him out. I found out Rocker, the son of a former professional football player, opted to go to college after being drafted in the 38th round of the 2018 MLB draft out of high school.

We won’t see Kumar Rocker in the league for another couple of years, but at a time where many fans are wondering what the future looks like for African-Americans in baseball, Rocker gave us all another glimpse into what might be.