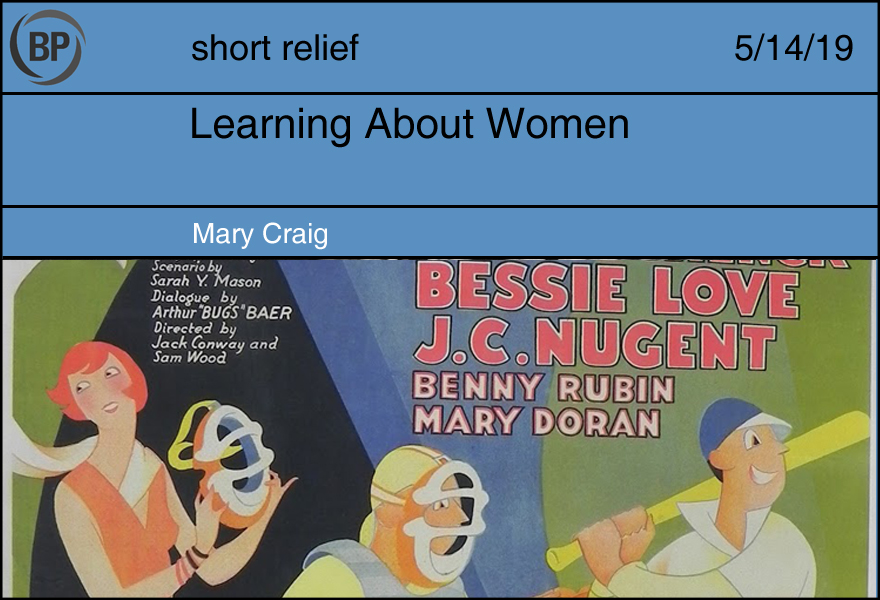 The 1930 Vaudeville comedy “They Learned About Women” tells the story of Jack and Jerry, two professional baseball players who tour the Vaudeville stage during the offseason. Both Jack and Jerry fall in love with the young, ‘innocent’ team secretary, Mary. Jack initially wins Mary’s affection, but soon after abandons both her and Jerry in order to chase money-hungry, blonde Vaudevillian performer Daisy. Of course, Daisy then leaves him for another, richer man, forcing Jack to come to his senses and realize how good he had it with Jerry and Mary, who are now together.

This realization occurs just in time for Jack to re-join his team, the Blue Sox, for the World Series. Upon Jack’s return to the team, his curmudgeonly manager Brennan greets him with a bit of foreshadowing, telling him, “use your head!” The final minutes of the film wrap up the plot as predictably as possible: Jerry uses an opportune rain delay in the deciding game of the World Series to repair the relationship between Jack and Mary, Jack “uses his head” to get beaned in the bottom of the 9th inning to get on base as the tying run, and Jerry hits an inside-the-park home run to win the game.

The film sought to capitalize on the lengthy Vaudeville careers of Joe Schneck, Gus Van, and Bessie Love, but did so poorly at the box office that the New York Times didn’t bother reviewing it. Other reviewers latched onto the songs as the film’s one redeeming quality, chiding the plot for relying on tired tropes. MGM buried the film after less than two weeks at the box office, launching it again in the ‘90s to a much larger audience.

It remains unclear today as in the ‘90s and ‘30s just what, precisely, these two men were supposed to have learned about women over the course of the film. Jack and Mary were in love from the beginning, Jerry was wary of Daisy from the beginning, and the lyric “is she always willing?” provides the lens through which women throughout the film are judged. The only change occurs with Mary, who is first shown as a secretary in the stands and last as merely a spectator cheering on Jack.

Perhaps, then, the lesson learned is that women work best as spectators. Contrary to the villainous Daisy who attempts to control her own destiny, Mary sits passively while Jack and Jerry decide her fate between themselves. She is first with Jack to establish a dichotomy between her and Daisy, then moves to Jerry once Jack abandons him, and ultimately returns to Jack as an act of friendship between Jerry and Jack.

It’s never explained why during the World Series Mary would abandon her secretarial duties, perhaps because this didn’t seem odd to any crew member or viewer. Though Mary was central to the plot, the film was not about her, but rather what Jack and Jerry thought of her. She was in the stands by the dugout because it was convenient for them.

This unexplained inconsistency, then, is probably the most truthful element of the film. In the ‘30s and the ‘90s and the ‘10s, women sit in the stands only when it is convenient for men to have them there as a means of demonstrating growth where there is none. 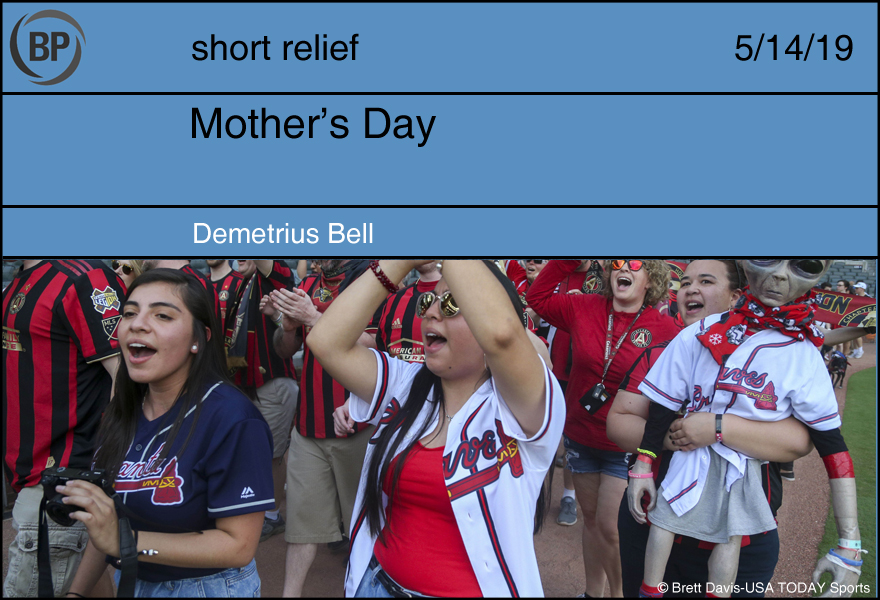 On Mother’s Day, I visited my family at my grandmother’s house for a family get-together. After I hugged my mom and gave her her gift, the first thing she said after thanking me was asking me to turn the game on. The Braves were in Arizona, so they wouldn’t be playing for another couple of hours. I told her about the later time, but she quickly corrected me by referring to the soccer game, since Atlanta United was kicking off at 2:30. All I could say was “Oh, right.”

I can’t say that my mom is why I got into sports as a kid, but she’s definitely the reason why I write about sports. Anything I’ve written on the internet, my mom has either read it herself (Hi, mom) or I’ve verbally given her the Cliffs Notes version of whatever I wrote. She’ll tell you that she only got into sports so that she could have something in common with a son who talked about nothing but ESPN as a kid, but at this point she’s got a genuine interest in all of it. If the Braves and other local teams are playing on TV, she’s going to be watching it. You won’t find a bigger fan of the teams here in Atlanta, and I’m counting myself as a smaller fan than she is.

Whenever I want to have a casual conversation about those teams or even sports in general, she’ll either come to me with a question or I’ll just tell her about whatever’s the controversial topic of the day. This will act as a bridge to other topics that are a lot weightier than just talking about the Braves, but it’s lovely that the Braves can serve as a starting point for what have been some lovely talks between me and my mother.

This is also one of the reasons why I prefer talking about sports with women instead of men. There was never really a “Wow, girls like sports, too?!” moment for me because I grew up with my mom knowing a lot about it. The sports chats I had with my mom were never really heated or unnecessarily loud like what I’d hear elsewhere, like a barber shop with a bunch of other dudes. Instead, it was calm and measured and I found that to be the same whenever I talked sports with other women. They know their stuff, so they don’t have to compensate by being loud and wrong.

I’ve already thanked her for this in private, but now I’m thanking my mom in public for helping me realize that talking about sports in a calm manner is the best way to talk about it. This is very low on the list of things I love about my mom, but it’s still an important one. She’s why I’m here, and I’m so grateful for her. 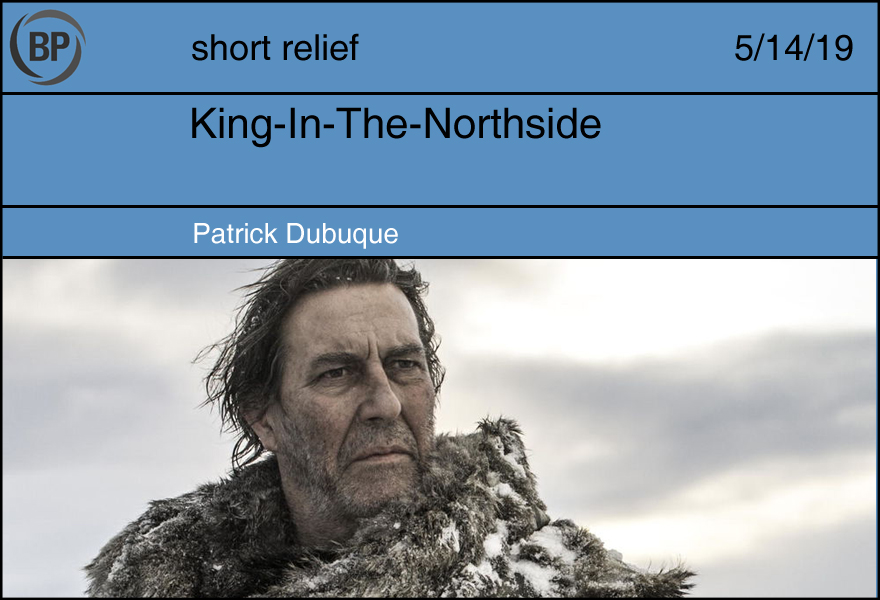 I’ve never watched Game of Thrones. For those who shape your identity around the media you consume, don’t worry: I’m sure it’s fine. I barely have time to watch baseball, after all. I did read the first book a decade ago, but then forgot most of it, and never pulled the second one off the shelf. My consciousness of it now is as light reflected on a pond; a collection of the reactions I see, and what I see is that lately, those reactions aren’t overly positive. The internet, on average, seems to be saying, “It’s almost over… and this is it?” The conclusion of the show has been mismanaged to the degree that the vibe feels like the work of the Mariners bullpen.

One criticism I’ve seen of Game of Thrones is that, since plunging forward beyond the incomplete path of author George R.R. Martin, the show has lost the one key element that made it so distinct in the first place: No one dies. Martin was happy to spend hundreds of pages weaving together threads and then, without ceremony, cutting them short. He forced the reader to invest, but made no promises. The narrative arc is so basic, so familiar that it’s practically baked into us, such that when someone dares to mess with the pattern, the result is always brilliance or disaster. The show’s handlers seem to have chosen the safe and straight path, writing backwards from the conclusion, packing in as much as the minutes allow, their ruthlessness bent toward efficiency.

I like thrift stores. When you go to a thrift store you have to accept the idea that fifteen minutes later you’re going to walk out empty-handed, because there was just nothing worth anything. And that’s exactly why I like the experience – with the death of video rental stores, it’s one of the few truly inefficient realms of our modern economic state. Books are on the wrong shelves, and I have to resist the urge to move Bradbury into the classics section, leave only footprints. You might find a bag of baseball cards hanging among the cheap plastic toys, or else across the store in the sporting goods section. The thrift store does not have a narrative arc.

Which is why we all find baseball so appealing – because it can kill off Mark Prior without a second thought. Not that we want Mark Prior to die, but because that risk sweetens the potential reward. It’s legitimately thrilling, the way the dawn of reality television must have felt before it, too, fell into its patterns. I grew up in an era when television shows rarely ended; they just kept going and living, the cameras turned off. The rise of the narrative arc in scripted drama, and the necessity of the Ending, works fine when a show is built on that sense of progress; for shows that lack that drive, like Seinfield, any ending, good or bad, seems out of place. One may as well write an ending for baseball.

And now this new show is ending, when the world couldn’t possibly. Even the modern viewer’s reaction to the predictable nature of their favorite show is, in itself, predictable, the result of expectations built, and monetized. Personally, I try to avoid those expectations as best I can; when picking books, I try to avoid any predisposition, give the author the blankest slate possible. It’s why I cracked open that weatherbeaten thrift store copy of Thrones in the first place. Sometimes that leads to stretches of bad books, and I admit, it’s not a perfect system.

But the same could be said of, say, the 2018 Detroit Tigers, and yet people still watched. “It’s almost over… and this is it?” they probably asked. And the answer was, sure, why not?