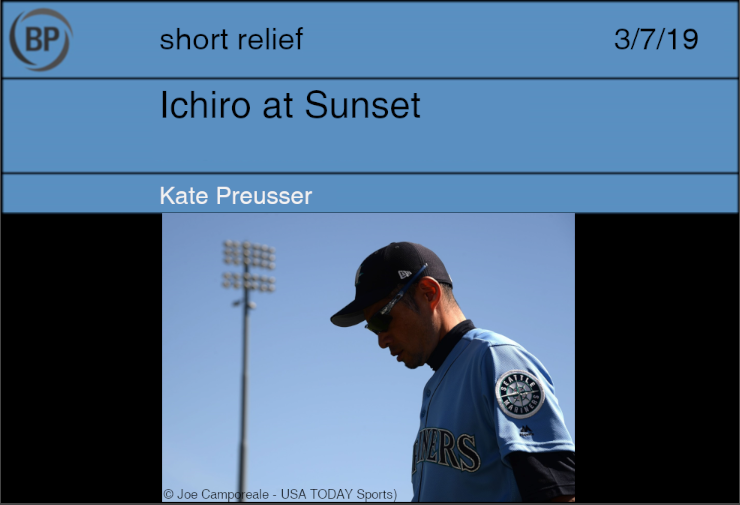 The chant begins the second he steps from the batting cage after his final round: I-chi-ro. I-chi-ro. It comes from Japanese fans who have traveled hundreds or thousands of miles to be here; from American fans wearing worn Ichiro All-Star  jerseys; from professional autograph hounds to small children who only know that he is a baseball player, and therefore Important. It comes from a woman wearing a homemade shirt bearing Japanese lettering that says “I heart Ichiro,” and a lanky teen wearing a new powder-blue Ichiro Spring Training shirsey and a bespectacled elder statesman in suit and tie. Everyone wants a little piece of Ichiro.

During batting practice, Ichiro jokes with several teammates, a quick, sly smile under those sharp brown eyes. He demonstrates a bat grip to Mariners backup catcher David Freitas, who keeps his face neutral but can’t help his wide eyes. He shows off his shoes, slick electric blue and green numbers. He inclines his head towards the more insistent fans shouting his name before turning away, elegantly but with finality.

When Ichiro steps into the cage, he hits the ball on the ground, again and again and again. Domingo Santana steps in after him, takes a pitch at his ankles, and sends it into the whiteblue Arizona sky until it disappears over the fence. His other teammates take turns lifting the ball in the air, far over the heads of their teammates shagging balls, who stick out a perfunctory glove before jogging to the warning track to retrieve the wayward projectiles. Ichiro steps in again, and again sends the ball skipping along the infield dirt, directly into waiting gloves. When he squares up a pitch, the assembled crowd gasps at the sound, only to watch the ball dunk harmlessly into the shallow outfield.

But to the fans, he might as well have knocked every pitch over the fence. The instant Ichiro puts one electric blue foot in the direction of the clubhouse, the chant starts up. By now the line stretches past the bleachers, around the corner, and down the bullpen fence, out of sight. Those in line chant loudly, fervently, as if they can hold Ichiro in place with the power of their voices alone, can freeze time on this late afternoon, can keep the sun from setting. But there is a night game to get to, one of the last in the desert before the team flies back to Ichiro’s native Japan. At some point, determined only by him, Ichiro signals that it is time to stop signing. He takes one last photo, inclines his head with regret, and walks away. The next person in line howls in agony. The man who just had his ball signed crows “That’s how it goes in the biiiiig city!” and the entire crowd, including those in the bleachers who aren’t part of this, including me, looks murder at him. The autograph hounds pack up their albums, muttering. Others walk away with shoulders slumped, dejected. The children move on to begging the other departing ballplayers for signatures, some of whom oblige. The sun continues its unassailable descent, bruising the sky purple, the color of royalty, the color of a king inclining his head slightly before turning away one last time. 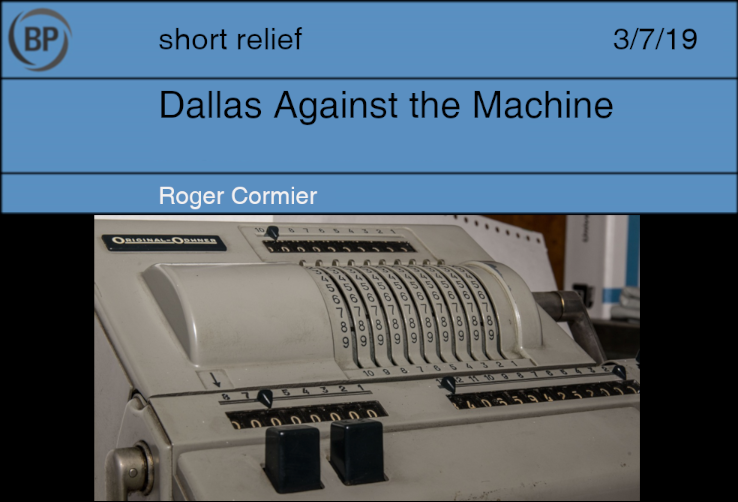 “The algorithm says you are worth six years, $114 million,” said the first general manager to call Keuchel and Scott Boras on Tuesday morning.

“$19 million per year, per our algorithm,” said the second.

“The, um, I mean, our analytics folks, as in human flesh and bones people, say 114 for six years.”

“The algorithm says shave your damn beard. I’m just joking. I bet none of the other front offices do that! We like to have fun here. The algorithm actually said six years, $114 million.”

Keuchel hurled his phone in the direction of the nearest body of water before he received the next voicemail. He knew what the person on the end of the line was going to say, no more nor less.

Hours later Dallas Keuchel stood at the end of his rope, facing a Brutalist edifice in the middle of nowhere. The name of the town was not known by anybody, yet everybody had a name for it. The Uber fee was astronomical. Dallas was worried he might not be able to afford such luxuries much longer. He used it as motivation to finish what he had started.

The security was surprisingly nonexistent. Keuchel was able to march right up to the room. To his horror, the tip he received was correct: his career FIP to the fourth decimal point was the passcode.

The only part of the windowless room not alabaster white was the business grey adding machine staring right back at Keuchel.

“No,” the human whispered.

Then came the tears.

What hurt the most, Dallas claimed later from his hospital bed, was how matter of fact his junior high school prom date sounded when she said this, moments before leaving with his best friend. 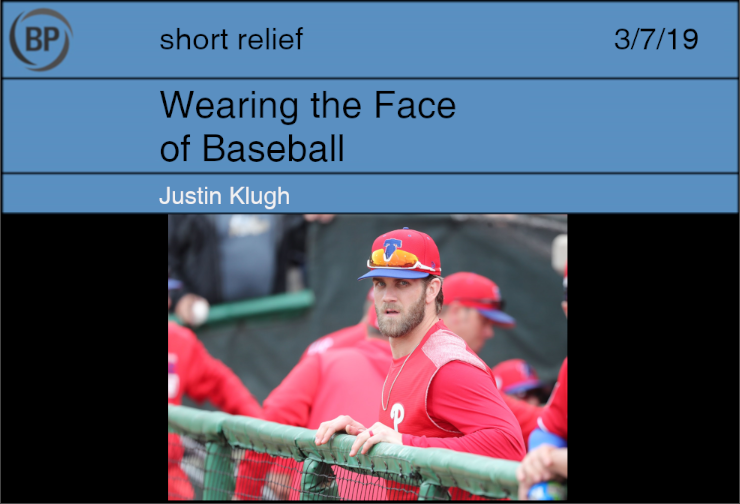 Not everybody was rooting for this, I’ve learned. Some people took the whole process pretty personally. In Philadelphia, we don’t take things personally. We take not doing things personally. Which is why this entire process has been a slowly loudening, three-month, full-city meltdown, because of the growing possibility that Bryce Harper wasn’t going to come here. But he did, though. You can go look at all the Getty photos of him belly laughing while wearing Phillies workout gear, if you want to. You probably should.

Now I know, I know; not every team signed the face of baseball this offseason. Some of you got the haircut of baseball, or one of the arms, maybe a couple of the toenails; every team does their part to provide the pieces of baseball’s giant, weird body.

So how do we do this? When do we boo him? Or hurt him, whether through feelings, or in the other, more illegal way? Is it still illegal if we all do it together, as a group? It’s even more illegal? Wow.

So do we just sit here and wait for the Phillies to get a bunch of the prime-time Game of the Week slots? Does our right fielder appearing on the cover of a video game mean we get a couple of extra runs on opening day? What about jerseys and tickets, we ran out of both of those. Does the season not start until they make a few more? Ugh, it’s so confusing! I told myself, you know, don’t change just because the face of baseball is on your team, but here I am, more inquisitive than ever!

Thank you to everyone for being so nice, though. Seriously. Throughout this process, while the Phillies negotiated with and eventually signed Bryce Harper, the face of baseball, fans of all other teams have been so nice and patient and understanding. When there were moments of doubt, you all chimed in with passive aggressive barbs and insults about battery-throwing, and even in some cases indicated that Philadelphia itself was the problem and that Harper would never come here because of the city and the people who live here; as though there’s some sort of nationally accepted sense of reticence to stepping foot in the bed bug-infested smoking crater in which we sit and watch baseball every summer.

We know it was all in good fun—just getting us to channel that natural rage streak every Philadelphia child is born with in a direction away from Bryce Harper, so he wouldn’t be put off by our slowly loudening rants about how long it was taking. You wanted him here as much as we did, you old softies! Thanks for taking the brunt of our deeply off-putting and extremely unified defensive pettiness. We all put the work in this winter, and we all deserve this.

Now, there’s nothing left to do but gaze at him. Ha ha, it really is wild. We’ve signed other big free agents before, but Pete Rose was really more of the “half worn sock” of baseball, and Jim Thome was more of its “pure soul.” Nothing like this. I suppose the only thing to do now is to just not have an emotional reaction to anything for the next 13 years, thanks to our wildest fantasies being realized. Thank you, everyone.

So what’s going on with the Mike Trout signing thing. Starting to think this guy doesn’t want to play in Philly. You know what, WE DON’T NEED HIM. BRYCE HARPER’S A REAL PHILLY GUY. TROUT’S JUST SOME BIG-TIMING WEST COA