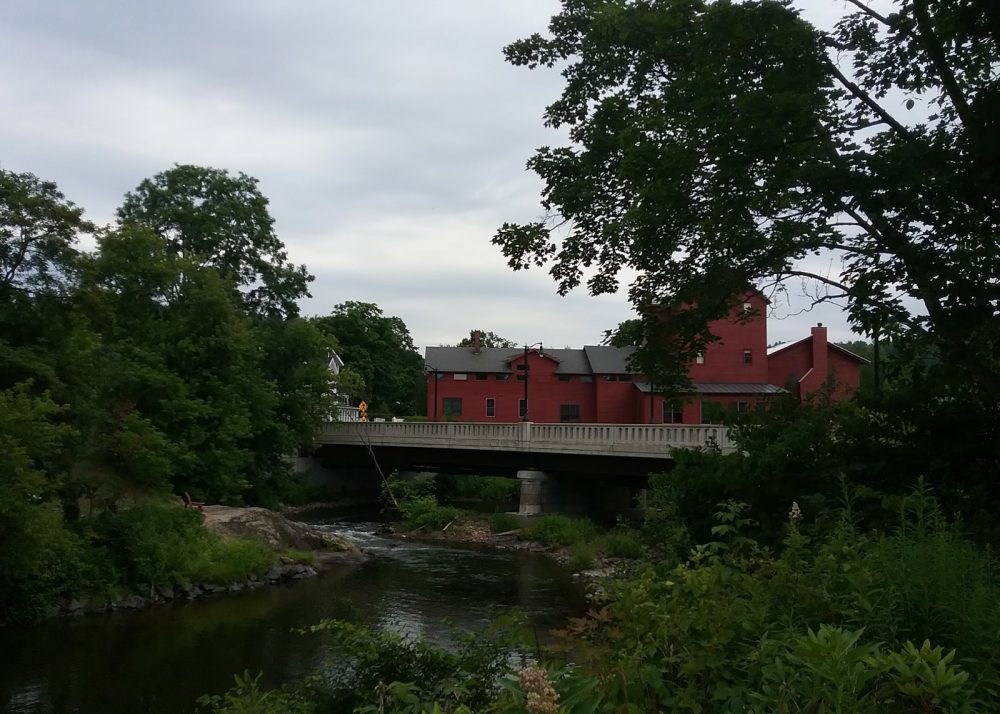 Vermont’s Gihon River flows past the studio that is my home this month, where I am finishing a draft of a project I have lived with for nearly a decade. In this small room overlooking this small river, I write and revise. When the trickle of words dries up for the day, I drink from other writers’ wells. Yesterday, in Louise Erdrich’s Baptism of Desire, in the long poem “Saint Claire,” I read, “It is almost / impossible to ask for nothing. / I have spent my whole life trying.”

When you’re working on a novel, you simultaneously ask for nothing and also everything. Everything makes up a draft; nothing offers any certainty. When something arrives—an image, a phrase, a scene—it requires accepting that you’re not sure which it is just yet, that you can’t possibly know whether it’s nothing or something, eventual jetsam or the keystone that will make this little triumph stand.

Back in March, I made a kind of wish: 90 wins for the Phillies. Despite the context, I don’t think I would call the figure a prediction. Prediction is too ordered a word for what I felt as I wrote it, just days after the Phillies signed Jake Arrieta and signaled a definitive attempt to move away from the nothingness that comprised the previous several seasons. 90 wins was a fleeting fancy, a wild hare of the spring that hadn’t yet arrived, and a strange one because in March, despite the optimism of the number, I felt closest to wanting nothing. I mostly wanted baseball. Not good baseball. Not great baseball. Just baseball, which was less of a something than a simple inevitability.

Yet, as of the moment I’m writing this, the Philadelphia Phillies are in first place in the NL East. As of the moment I’m writing this, I am exhilarated and terrified of what that might mean because it is also July and teams are maneuvering and Manny Machado has moved in and out of the conversation like the breeze at my window, to alight, finally, in Los Angeles. To want Manny Machado or anyone like him—a free agent at the season’s end, a passing stranger—is a clear mark of wanting everything, wanting it right now.

In my studio, I disable the Wi-Fi, turn off my data, try to be distracted by nothing. But the Phillies are in first place. A red-painted mill sits square in my sight when I’m writing. Its wheel is gone, nothing left to turn, but I can imagine one, all of fortune turning with it. In the mid-season light, all that fortune is dressed up like the 1980 Phillies, daring me to envision anything at its top.

The 6th century Roman philosopher Boethius constructs the conceit of Fortune’s Wheel in The Consolation of Philosophy. Fortune, personified, stands by her wheel, and men and women climb upon it. The wheel turns, and they rise, but we all know how this goes. There is no glorious plateau atop the wheel, no state of constant bliss. Boethius writes the inevitable conclusion: Fortune “[n]ow tramples mighty kings beneath her feet; / Now sets the conquered in the victor’s seat.” If you squint, it’s sort of hopeful—there’s no plateau at the bottom of the wheel, either—but the price of rising is always falling.

Boethius’s metaphor critiques the vanity of mortal success and its transitory nature. Baseball is nothing if not emblematic of mortality: No one stays at the top of their game—the game—forever. Careers end. Records break. Even at the practical level, fortune nearly always has a price, measurable in tendons and ligaments, prospects and cash considerations. In other respects, the price is moral, spiritual: what else has been abandoned for this pursuit? The same is true in the macro and micro level of baseball; the fortune of Major League Baseball has everything to do with the state of minor-league contracts, with adolescents abandoning the varied pleasures of childhood to specialization earlier and earlier, with expensive traveling showcase leagues that shut out less fortunate hopefuls. In nearly all cases, the choice to devote one’s life to sport means giving up something else. Sacrifice is the nature of devotion. Here at the trade deadline, time and season factor in: try to win now, or try to win later? Climb the wheel, hand over hand—install Manny Machado for half a season and postseason hopes (and perhaps a better shot at signing him long-term)—or wait for its turning and Yusniel Diaz’s anticipated flourishing?

But it’s more complicated than that. Wait and see means aging a few more players. Wait and see means more miles on Clayton Kershaw’s back. Wait and see means, potentially, missing that one big chance. In Boethius’s metaphor, Fortune’s Wheel is a relatively simple round, easy to understand. In trade season, there are dozens of wheels, all turning in different directions, all at varying speeds. It’s not enough to reach a single apex, but to time them all.

What is Fortune’s Wheel to the unpublished novelist? A ferris wheel, the kind at the state fair that might, at any time, reverse its course, stutter, stop—and there you sit, three baskets from the ground.

The night of the All-Star Game, when reports rolled in that Manny Machado would join the Dodgers, I got the news via text. I wrote back, “Is it weird to feel relieved? I feel relieved.”

Hadn’t I so recently declared that hope for 90 wins? Relief is a strange thing to feel upon learning the Phillies didn’t get the kind of player about whom “game-changer” is an accurate epithet. But beyond my own assessment of what the Phillies might need to make a run this year (a little help on the mound, a better bat for right field), the real source of my feeling is another hope, the allure of an uncertain maybe. The glimmer in the distance always has the potential to become something better than whatever is in hand.

That glimmer is why I write; the capacity of the idea, the character, is what seduces, the dogged faith in what it all might become. It smacks of Plato, those early project dreams: the ideal form that might exist if everything goes right, if the brain and the fingertips are blessed with particular grace, and I am willing to show up long enough, often enough, to see the moment when all the wheels spinning in the air align. And the novel, as an art form, offers such glorious distance: there may be literal years between conception and the fourth-fifth-sixth-draft scouting report that something is working. Don’t call it a failure yet; the manuscript’s only just now earned the call-up to double-A.

But there’s no escaping philosophy or the rate of wash-out. The best player we know—the best we’ve seen, personally, devastatingly, at the rubber’s distance, as Seth Sawyers writes—might never enjoy so much as a cup of coffee. Maybe they make a 40-man roster, but their cleats never touch the Skydome turf. Maybe the journey ends after six seasons in high-A. Maybe sooner. I have two complete manuscripts that will never see the outside of their drawer, two more abandoned two-thirds through. Their raw stuff was never going to do so much as cast a lumpen shadow on that cave wall.

The mill I’ve spent so many days looking at and being in, the one where the resident artists take their meals and pick up their mail and browse the art library, once converted grain to flour and livestock feed. Its wheel, now absent, functioned as a result of manipulating the river, diverting the stream to an end beyond nature’s oxbowed, mutable beauty.

All across baseball, teams are deciding how to direct the season’s water, and some riverbeds we know are going to be parched. If the wheel is going to turn, it’s going to have to wait for spring—maybe not even the next—and what’s released during the thaw. The truth of a trade deadline is not beauty but production: all of it is grist, what can be made into legacies and long stretches of contending, or, barring that, a single championship.

A novel is not a championship, and as a writer not yet forty who hasn’t published a book, I don’t have the audacity to think about legacy or contending with anything except this manuscript and my own process. I think about getting this draft done, taking it one page at a time in the novel’s long season, but that has required shifting my river, affecting my own prospects: I go away from my family and home—missing a reunion, my grandfather’s birthday, the garden’s ripening—to devote my whole brain to the task; I skip a lot of things that happen in the evening—movie nights, the places conversations go when they’ve really warmed up, eighth and ninth innings, and everything that happens on the west coast—so I can wake early and work at my best time, all while knowing there are no guarantees. I can only trade toward this chance, against what this wild hope might become.