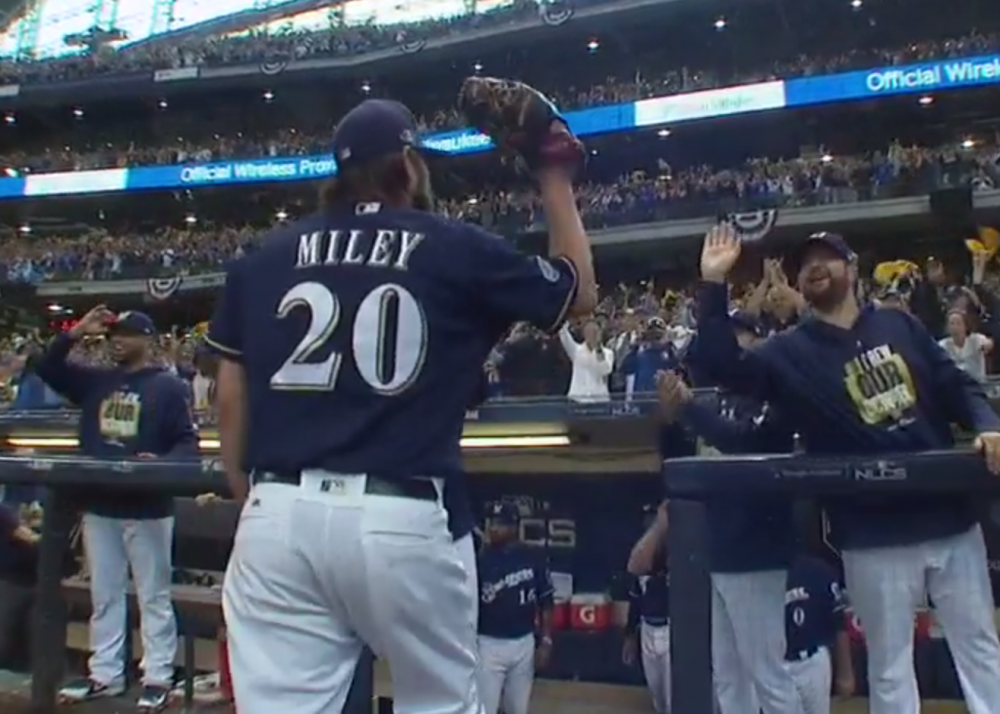 Through 5 2/3 innings of NLCS Game 2, Brewers-left-hander Wade Miley was twirling a gem. He’d thrown only 74 pitches, faced 19 batters, retired 17 of them (three on strikeouts), and not given up a walk or a run. The only blemishes on his record for the night were singles to Justin Turner, the second batter he faced, and Chris Taylor, (somehow) the last better he faced. Brewers manager Craig Counsell strode to the mound, thanked Miley for his efforts, and made a double-switch. Miley’s night was over.

The argument for a “cruising” pitcher boils down to the idea that if a pitcher is having a particularly good day, that recent information is worth more than his track record. To take a more extreme example, if we had a pitcher with an ERA near 6.00 (say … Miley during his stint with the Orioles in 2016 and 2017), who was somehow in the middle of a one-hitter, we believe he’s closer to a guy who throws one-hitters than a barely adequate fifth starter. At least today.

We know the third-time-through-the-order penalty is a real thing. It’s not entirely clear whether it’s a function of hitters becoming more familiar with the starter after seeing him two times or just pitch count creeping up on the pitcher, but either way, by the third time around a pitcher isn’t going to be quite as good as he had been. Particularly in a playoff game (and with a day off on the schedule for the next day), could Counsell afford to risk Miley a third time through the Dodgers’ lineup? Maybe there’s something to the “cruising” hypothesis. Maybe there’s still a third-time-through-the-order penalty, but when a guy is cruising, it’s not as bad.

To test the hypothesis, I pulled regular season data from 2013-2017. I looked to see how many times a pitcher gave up an on-base event (hit, walk, HBP) during the first two times through the opposing batting order (by definition, 18 hitters). Using a technique known as the log-odds model, I can predict how likely an event (say, another on-base event) might be when we consider both who the pitcher is and who the batter is, and use that as a control in a regression. I added in an indicator of whether the plate appearance was in the third go-around, and then an interaction term which asked the program to adjust that third-time indicator based on the number of on-base events the pitcher had given up on the first and second time through the order.

If a pitcher was “cruising” (i.e., hadn’t allowed many baserunners), then we ought to see that his third-time-through-the-order (TTO, for short) penalty is significantly lessened. And technically it is significantly lessened. Now would be a good time to refresh the reader’s memory about the difference between statistical and clinical significance. Yes, the p-value was less than .05. The regression predicted the difference between a league-average pitcher who was pitching a perfect game through 18 batters and a league-average pitcher who was having an average night (let’s say six on-base events through the first 18 batters), was about seven points of OBP.  That’s not nothing, but to put it in perspective, grabbing the platoon advantage is worth about 20 points of OBP.

(Methodological note: It’s important when doing this type of research to remember the sample is biased—and the sample is always biased—but in this case from two different directions. A pitcher who gives up too many on-base events in the first 18 batters doesn’t get to face the lineup a third time around. And the only guy who gets sent out there is allowed to do so because his dugout thought it was a good idea. If we assume they have some clue what they’re doing, then they’re introducing bias into the sample. On the other side, if a pitcher is doing really well during his third time through the lineup, he’s likely to get one more batter. If he’s not, or if he shows signs of faltering, he’s more likely to be taken out. Sabermetrics is 95 percent accounting for the bias in your sample and five percent long division.)

I looked at several other outcomes and nothing really rang the bell there either.

So yes, Miley was probably a little better than his numbers would have suggested, but not in a strategy-altering way. If Counsell’s goal was to get Miley through two turns around the lineup and then go to his vaunted bullpen, then he did the right thing to stick to his strategy. I’m sure he was thrilled with the fact that Miley got him 17 outs, but it was time to thank him for his service and move along with life. The fact that it “didn’t work” doesn’t negate the correctness of the move. All options have risk. You pick the one most likely to break your way.

Counsell gets a gold star for not falling prey to the temptation of the “cruising pitcher.” Maybe it’s even enough for me to forgive him for the role he played in this.

Special thanks to this tweet for sparking this week’s article and to Keith Law for batting the question my way.

You need to be logged in to comment. Login or Subscribe
Barry Gorden
It seems to me that the "third time through the order" penalty is in some ways a self-fulfilling prophecy. In the first two times through the order, if the pitchers allows a base-runner or runners, he gets a chance to work out of it. And often he does. The third time through, he gets the hook. This also means that the third time through, he never gets to face the weak hitters at the bottom of the lineup; his sample is contaminated with a preponderance of at-bats against good hitters.
Reply to Barry