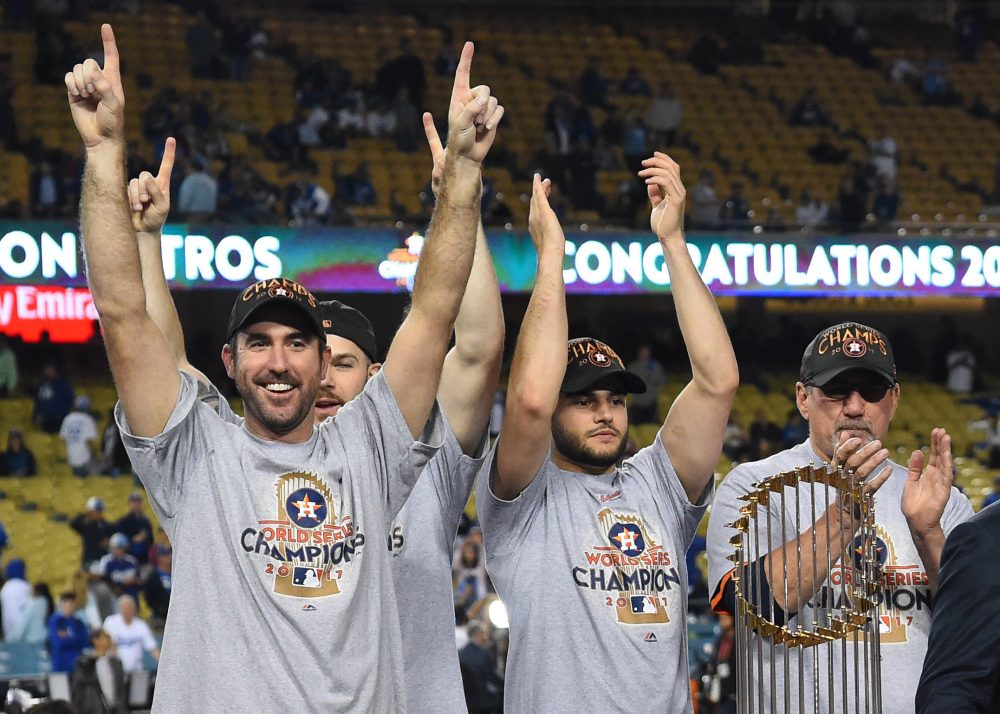 He got his ring with Houston, but when Justin Verlander goes into the Hall of Fame, he’ll be wearing a Tigers hat.

There’s no question that Verlander will be enshrined in Cooperstown. He could retire tomorrow and make it in. Seven All-Star appearances. A Rookie of the Year award. The Cy Young and the MVP in the same year. Five other top-five Cy Young finishes, and another one likely coming this year. He’s inside of the top 25 all-time in strikeouts, and he’s nowhere near done.

The great majority of all of that came with Detroit. He returned there for the first time since being traded to the Astros last year.

He pitched on a cold dreary day in front of a barebones crowd. It was the perfect encapsulation of the 2018 Tigers.

Verlander, of course, shoved. He struck out ten and earned a win.

It’s still a little weird to see Verlander in a Houston uniform. He is a Tiger, through and through, and will be remembered as such. Seeing him back in Detroit felt right. It was only fitting that he dominated.

Trevor Story now has 32 home runs on the year. He is a shortstop.

I mean are we pretending that Trevor Story is irreplaceable

Get a load of this idiot.

The Rays now have the same record as the Mariners, which in a vacuum isn’t the craziest statement to make over the last few years. The thing is, both of these teams are reasonably good this year. That was expected from Seattle, and decidedly not from Tampa Bay. The Rays are playing good baseball right now and it’s freaking weird.

Lorenzo Cain had a big night as Milwaukee beat the Cubs, and the Brewers are now just one game out of first place. Jon Lester also left this game with the athletic trainer. These last few weeks are going to be wild in the Central.

Remember how Mike Trout is an amazing defender on top of being an all-time hitter?

All of the good games are bunched up today, so you’ll need to make some choices. The horror!

The first worthy candidate starts at 7:10 p.m. when the Indians and Rays face off. Tampa is red hot and Cleveland is Cleveland. They’re also expected to activate Josh Donaldson, which is cool. Shane Bieber and Tyler Glasnow are the starters.

If the Rays aren’t your thing, perhaps an NL Central grudge match is in order? The Brewers and Cubs will face off to try to determine the division winner. Jhoulys Chacin and Jose Quintana will be on the mound at 8:05.

Then at 8:40, there’s another divisional tilt between the Diamondbacks and Rockies. Zack Greinke and Antonio Senzatela will be the starters in this one.

You need to be logged in to comment. Login or Subscribe
deadheadbrewer
Perhaps it's just me, but I would have enjoyed the column just as much without the author calling someone an "idiot." I've come to expect a higher tone and tenor of discourse from BP over the years.
Reply to deadheadbrewer
David Brown
Nick was referring to himself as the idiot, deadhead. NOW, what do you think?
Reply to David
deadheadbrewer
I completely missed that. I retract my comment with chagrin! :)
Reply to deadheadbrewer