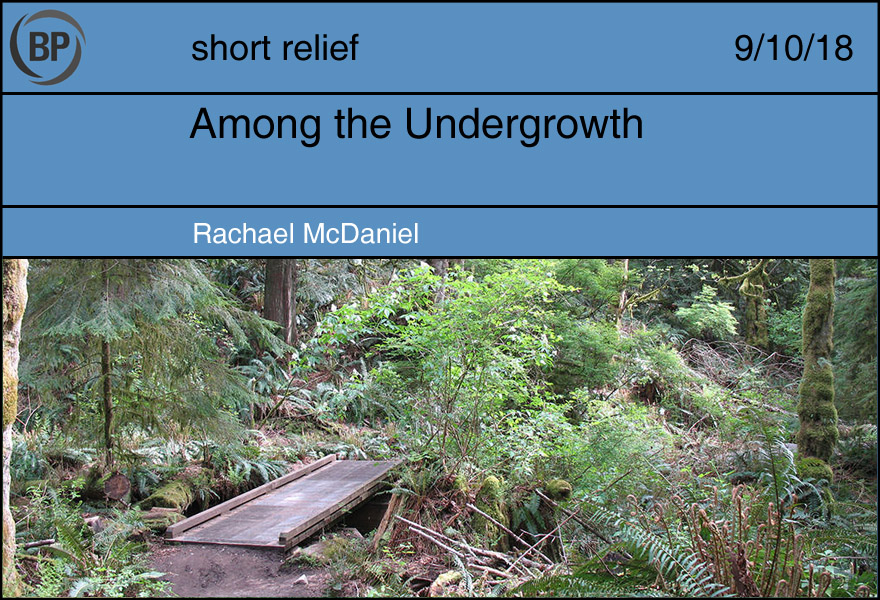 By the baseball diamond, behind the bleachers and dugouts and the rusting fence, there used to be a forest. You spent a lot of time there as a kid. You picked up plants and old bones, pretended you were a wolf-person. In your memory you are always very young, and yet somehow always alone; it is very quiet most of the time, and you have no reason to be there. Nothing ever disturbs you in your memory except the occasional baseball, launched foul off the bat of some little leaguer or men’s league player. They lay on the soft dark floor of the forest, obvious and unnatural.

You could return the baseballs to the game in exchange for a coin, or a candy — whatever was conveniently available from a pocket. You did this sometimes, when the fancy struck you, but the value of the reward never quite seemed to match the value of the errant object itself. You never played baseball, never knew anyone who did, never watched the sport. The ball was a mystery to you. You tried to saw one of them apart with a pocket knife, which, though eventually successful, was a lot harder than you expected. Several of them you drew faces on; one of them you gave a wig of twigs and string. When you had that phase of smashing things apart with rocks, you tried to smash one apart with a rock. All that did was rip chunks out of the cowhide. You got so mad at that ball that you scribbled red on it and wrote “BAD” on the side.

The one constant was your knowledge that the baseballs did not belong there, lying on the forest floor. So when you were done with them, you put them in a box you had hidden in a hollowed trunk. You always remembered where it was because there was a yellow tie on one of the lower branches. When you walked by the players on your way home, they would ask you if you’d seen any baseballs, and you would think about your box of strange treasures, and you would say no. You think about that box often, wondering if it’s still there in that hollowed tree.

When you left this place you said that you were never going to come back. You haven’t, so you don’t know this, but the baseball diamond is still there, with the bleachers and the dugouts and the rusting fence that they always say they’re going to fix soon. The forest is not. They have cleared it, and they are going to build something, and there will be lots of people here, more than there ever were before. No one picks up the baseballs anymore. They lie untouched on the bare ground between the stumps. 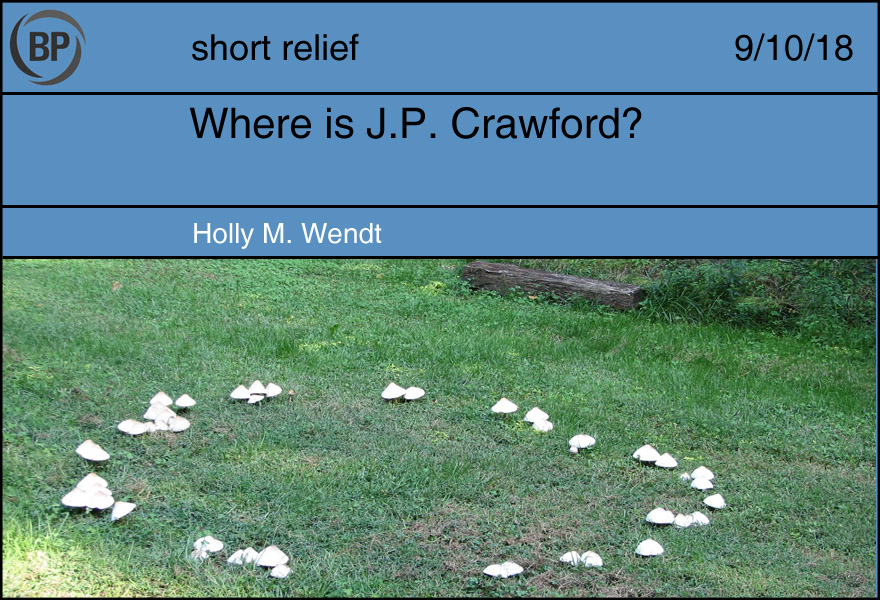 Though J.P. Crawford was theoretically summoned back to Philadelphia early last week, the Phillies’ frequently ailing defense has yet, as of midday September 8, to enjoy the benefits of Crawford’s glove. Given how cold the team’s bats have been, too, offensive production doesn’t offer much of an excuse for his absence. Only one thing can.

He’d come to the park late, alone, to make sure the place felt good before he brought the dogs. A mist hung over the little stream, shrouding late summer’s thick green with an unseasonable cool. On a mossy patch nearby, white-capped mushrooms shone, their circle so pleasantly on-deck he couldn’t help but step in, take some phantom swings with a branch he found. Inside the circle, it was like he could feel the lights, hear the crowd, like there was a real ball meeting each cut. On one swing, he stepped on a mushroom, knocked the top from another.

In the distance came a sound like hounds baying, but in a different key: higher, wilder, the way ghost wolves might. Coyotes, maybe. J.P. stepped out of the circle and found himself at once surrounded by strange folk on horses the same color as the mist. Their ears were pointed and their eyes were too bright, like spilled Powerade.

J.P. checked over his shoulder. He hadn’t seen the LARPers that sometimes gathered for foam-weapon melees on the battered field near the park’s entrance — nor, now, could he see anything familiar. Where there’d been the benches and a pond now stood deep woods, a faint glow far off.

“You’ve broken the circle,” one of the strange people said. Her ears looked more real than the ones the LARPers wore. “In forfeit, you must join the Faerie Hunt.”

He knelt, tried to set the cap back on one mushroom, but his hand passed through it. “Hunting’s not really my speed — unless you mean ground balls?”

Another of them laughed, a sound like a foul ball against a windshield. “A ball is neither fox nor fiend nor false friend. What thrill in that?”

“I’m not hunting any foxes,” J.P. said, even as he felt himself compelled toward a riderless horse. “Listen, I play baseball, and we have a game tomorrow. So if you —”

“You will come,” the first one said.

To the right, a pull like gravity and the horse’s empty saddle. “Nah, I have to get to the ballpark early —”

“For ‘ground ball hunting’?” Some laughed.

A silver sphere skimmed the grass, and reflex fired: two neat steps to his left, scoop, and throw. The sphere exploded into stars against a shadow very much like a first baseman.

Some of the riders blinked. One said, “You simply gathered the power to yourself and let it go?”

It hadn’t come in all that hot, not like fielding stuff off Jorge’s bat. But J.P. wanted to be polite. “It was an easy one — good grass here, no rocks. Some parks, you know — you get crazy bounces.”

“It’s just a matter of getting in front of it.”

Another glittering sphere hurtled toward him, and he lunged with his bare right hand. He flipped it into nothingness. A third came, harder, and he cradled its glittering hop. Again and again, ball after ball, fast and a little stinging without a glove, but it felt good, too.

“Teach us.” The clearing widened at the first rider’s imperious words. The whole company came down from their horses, which frisked into shadows.

J.P. looked up into the dark canopy, all trace of dusk masked by night. It didn’t feel late. In his lungs, it felt like spring, like it had always been spring, like it might be spring forever. “Usually we play under lights.”

Ten thousand lightning bugs rose and glowed, and the moon lurched closer. He picked up the branch again. In his hand, the new ball of light was firm, familiar, and he couldn’t tell if he was imagining seams.

“Here,” he said, and described a rough circle with the makeshift bat. “You all stand here, and I’ll hit some grounders to you. You scoop the ball, then toss it back, soft, and I’ll hit it again to someone else. But just for a little, okay?” He remembered playing pepper as a kid. It was so easy to lose track of time. 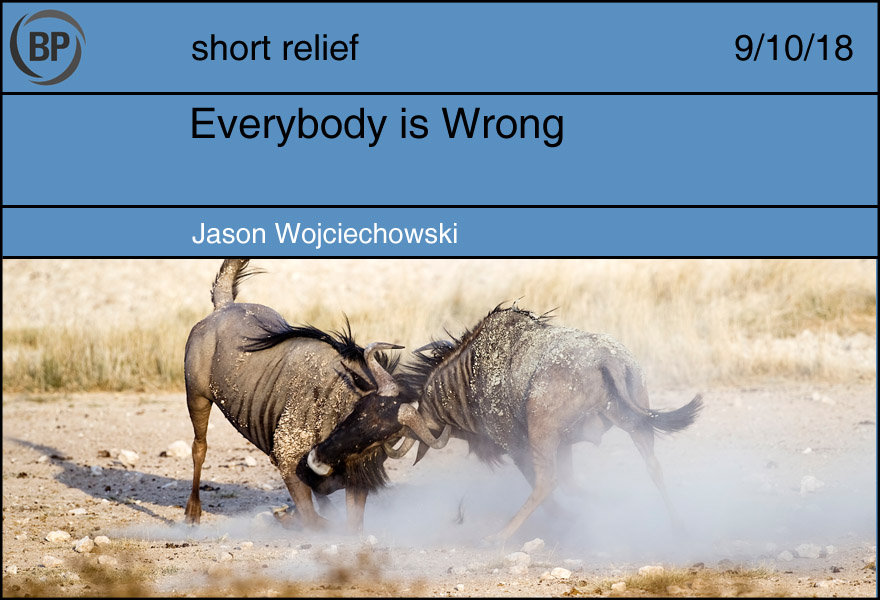 Would you like to see a situation in which everybody is wrong? Browse on over to the bottom of the sixth of yesterday’s Giants-Brewers tilt and pick the action up with Ryan Braun‘s at-bat. Let’s start the catalog of incorrect behaviors, words, and actions there:

In sum, everybody is wrong.