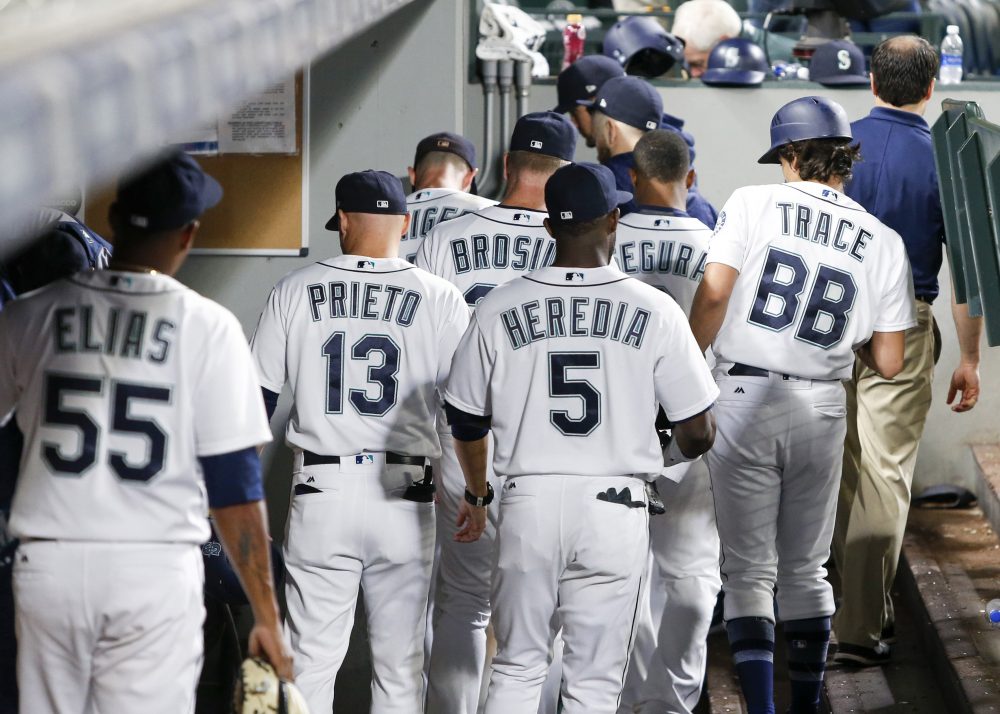 The Seattle Mariners haven’t shown much fight lately on the field. You might know that they haven’t made the playoffs since 2001. That’s longer than any other franchise. The Padres have made the playoffs since then. The Marlins have won a World Series since then! The Mets? A playoff and World Series appearance. The White Sox have been there twice and won a title. The Cubs got good, and really bad again, and later won a World Series. OK, you get the point. It’s been a long time.

Things were going great for a while in Seattle this season! They looked well on their way to snapping that streak. And then they didn’t. Now, the M’s looking up at Oakland, Houston, and the Yankees, and the odds of them making the playoffs are dwindling.

Finally, though, they showed some fight. Uh… I mean, kind of?

Mariners has an altercation in the clubhouse pregame. Dee Gordon asked the media to leave and shut the doors and the incident broke out minutes later.

Stuff like this happens from time to time, of course. How much you hear about it generally is just a matter of how much or near press is when the incident occurs. Still, as they rappel down the standings it’s not the greatest sign in the world to see teammates outright fighting with one another. Surely, though, a series against the worst team in baseball could ail their woes. Right?

Not quite! Despite a first-inning homer by Robinson Cano and six shutout innings by Wade LeBlanc, things turned south in a hurry when the Orioles’ motley crew of castoffs (plus like, Adam Jones and stuff) rallied for four runs in the seventh off Adam Warren and Zach Duke, to push the Mariners 5 ½ games out of the last Wild Card spot.

Will the Mariners show any more fight — in the competitive sense — between now and the end of the season to end that playoff skid? Right now, the odds seem against it.

The Cubs and Brewers are NL Central rivals currently battling for a division title. Or are they? Cole Hamels isn’t so sure.

Cole Hamels, not feeling the rivalry after a walk-off loss to the #Brewers: "When you have majority #Cubs fans in the stands, I don’t know if that’s a rivalry yet. I’ve been in rivalries. They’re not going to like me for the comment, but you can look at the ticket sales."

Craig Counsell had pretty much the perfect response, but whatever side of the argument you’re on, you’ll have to agree that the Brewers aren’t going away quietly in their pursuit for the division. Christian Yelich is a big part of the reason.

Yelich did it all in an 11-1 win, but Wade Miley — needing little support — tossed six innings of one-run ball in lowering his ERA to 2.12. Milwaukee moved within three games of the division lead.

The Nationals are all but dead. The Cardinals remain in playoff position and within striking distance in the NL Central. The Cards strengthened that position behind the power of Marcell Ozuna, Yadier Molina and Paul DeJong.

The Nationals? Still pretty much dead.

We’re 138 games into the season and the Rockies are in sole possession of first place in the NL West. They’re in that position despite a negative run differential and the generally perceived superiority of their main competition in Phoenix and Los Angeles.

They just keep winning, though, man.

Ryan McMahon’s go-ahead homer was the start of a five-run inning, which included a Carlos Gonzalez bases-clearing triple. German Marquez also struck out 11 in 6 ⅔ innings.

The Red Sox are essentially on cruise-control until playoff time, with the focus on staying healthy and getting guys like Chris Sale ready for October. On Tuesday, they placed Rafael Devers on the DL and… Brandon Phillips is still in the league?! Still, an interleague challenge like the surprising NL East-leading Braves hasn’t proved too difficult yet.

Rick Porcello isn’t quite 2016 Cy Young Rick Porcello, but has rebounded nicely from a disappointing 2017. The Red Sox almost have 100 wins now. There’s still about a month left in the season.

There’s a good chance the Yankees and Athletics will play a winner-take-all playoff game in October. Right now, though, they’ve got three to play in Oakland and, after the A’s took the opener, the Yankees evened things up.

The A’s led 1-0 for most of the game and seemed well on their way to cutting into New York’s lead in the race for home-field advantage in the Wild Card Game. But after the Yankees tied the game on a bases-loaded walk in the seventh, Luke Voit’s homer opened the floodgates in a 5-1 win.

The Diamondbacks shut out the Padres to stay just 1 ½ games out of the NL West race. Throwing up zeros was thanks, in part, to A.J. Pollock covering the vast expanse of the Chase Field gaps. If we’re being honest, Diamondbacks fans are probably most thankful that their injury-prone star center fielder came away unscathed.

The Cubs-Brewers rivalry continues with Milwaukee trying to cut further into Chicago’s division lead. Jhoulys Chacin takes the mound for the Brewers against Jose Quintana. The rubber match of Yankees-Athletics will feature Luis Severino against Mike Fiers. Corey Kluber pitches for the Indians, whose magic number is dwindling, against the Royals. Stud White Sox prospect Michael Kopech makes his fourth career start. It will be his second against Detroit. Two of his first three starts were cut short by rain delays.