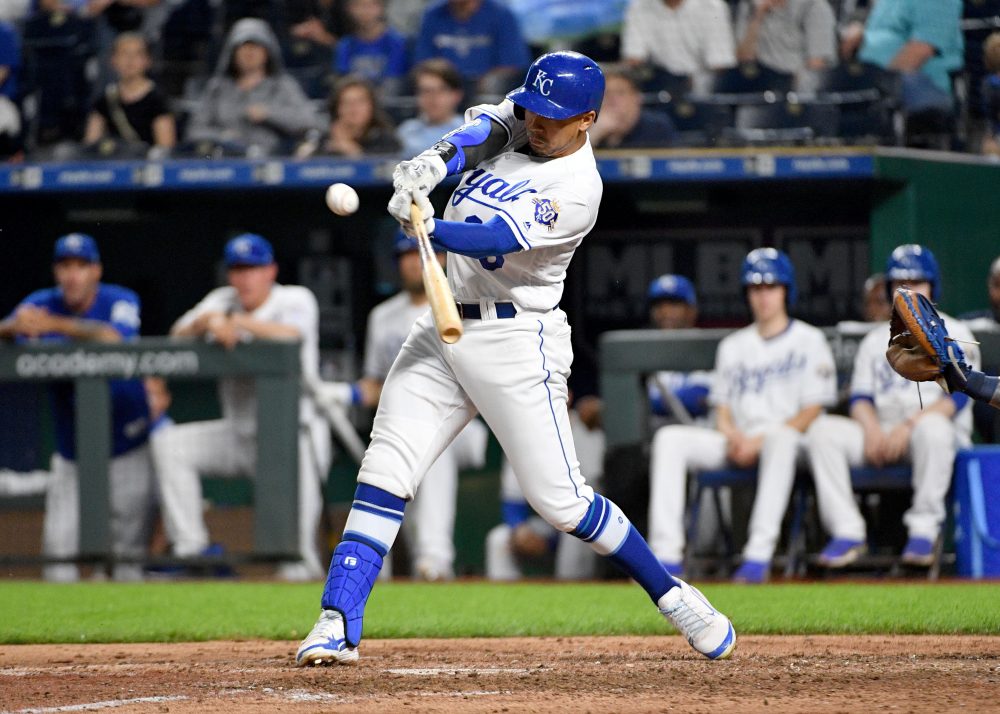 There are three primary reasons why a rebuilding team with no realistic hope of contending would sign a veteran role player to a one-year contract. The first is obvious: They want to win a couple more games, and more importantly just be more competitive in general. The second is sort of connected to the first, except it’s not as quantifiable: They want that veteran’s presence in the clubhouse, interacting with and providing an example for younger players around whom the team is building long term. And last but not least: They want to flip him for future assets in a midseason trade.

Kansas City pulled off all three with Jon Jay. Signed to a one-year, $3 million contract in the middle of spring training, The Federalist hit .307/.363/.374 in 59 games, pushing the Royals roughly one win above replacement level in just two months. By all accounts he provided the intangible benefits the Royals had hoped for, albeit in an abbreviated stay. And when presented with a reasonable trade offer for the 33-year-old outfielder, general manager Dayton Moore and company moved quickly, shipping Jay to Arizona for a pair of marginal pitching prospects with some big-league potential. Not bad for what ended up being a total investment of around a million bucks.

Like many free agents this offseason, Jay seemingly deserved a bigger payday than $3 million. Last offseason, coming off a season in which he was limited to just 90 games by a broken arm, Jay signed a one-year, $8 million deal with the Cubs. Then he hit .296/.374/.375 in 141 games for Chicago … and managed only a one-year, $3 million deal from the Royals. Jay called it a “very strange” offseason while trying to remain diplomatic about landing in Kansas City, adding: “I’m happy to be here, excited to be here, happy to be in spring training. There are a lot of pieces here. I’m here to do my part.”

Jay can accurately be described as a “tweener” or a “second-division starter” in that he lacks the range for center field and also lacks the power most teams prefer in an outfield corner. What he does have, however, is a remarkably consistent track record full of strong batting averages, excellent contact rates, and gap power. Jay has played nine seasons in the majors, hitting at least .290 in seven of them and posting an on-base percentage above .350 in six of them. He’s a career .290/.356/.383 hitter with similarly solid numbers against righties (.290 AVG, .354 OBP) and lefties (.288 AVG, .361 OBP).

Compare his career AVG and OBP to a half-dozen more prominent left-handed-hitting outfielders:

All seven hit around .290 with an OBP around .350. (According to PECOTA, Jacoby Ellsbury is Jay’s top same-age comp.)

But now take a look at their slugging percentages: 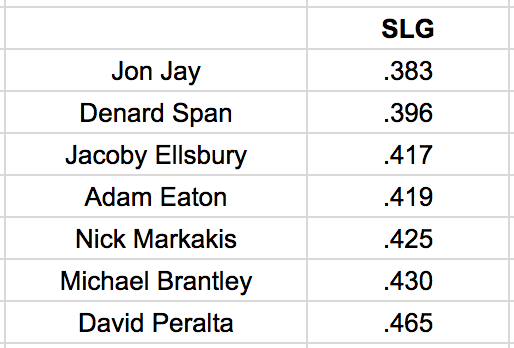 Jay is basically 10 homers per season and/or a little more range in the outfield from being every bit the equal of those other six guys, but he’s not. And that’s why, after a very solid six-season run in St. Louis, he’s had to settle for modest one-year contracts in three straight offseasons. Arizona could have simply offered Jay more than $3 million and signed him in March, but they had A.J. Pollock in center field, David Peralta in left field, and Steven Souza as the replacement for J.D. Martinez in right field, along with giving Jarrod Dyson a two-year deal to be the fourth outfielder.

Two months later Pollock and Souza are on the disabled list, Dyson is hitting .204/.304/.298, and the offense in general is struggling to score runs. Jay is a seamless fit, sliding into a starting job in the short term and then likely shifting into part-time work once the outfield gets healthy. It’s a role he’s filled for nearly a decade—not quite good enough to be an impact everyday player, but way too good to be merely a backup. For the cost of two fungible minor leaguers, the Diamondbacks more or less get a mulligan on not pursuing Jay as a free agent and bring him in now on what’s essentially a four-month, $2 million deal.