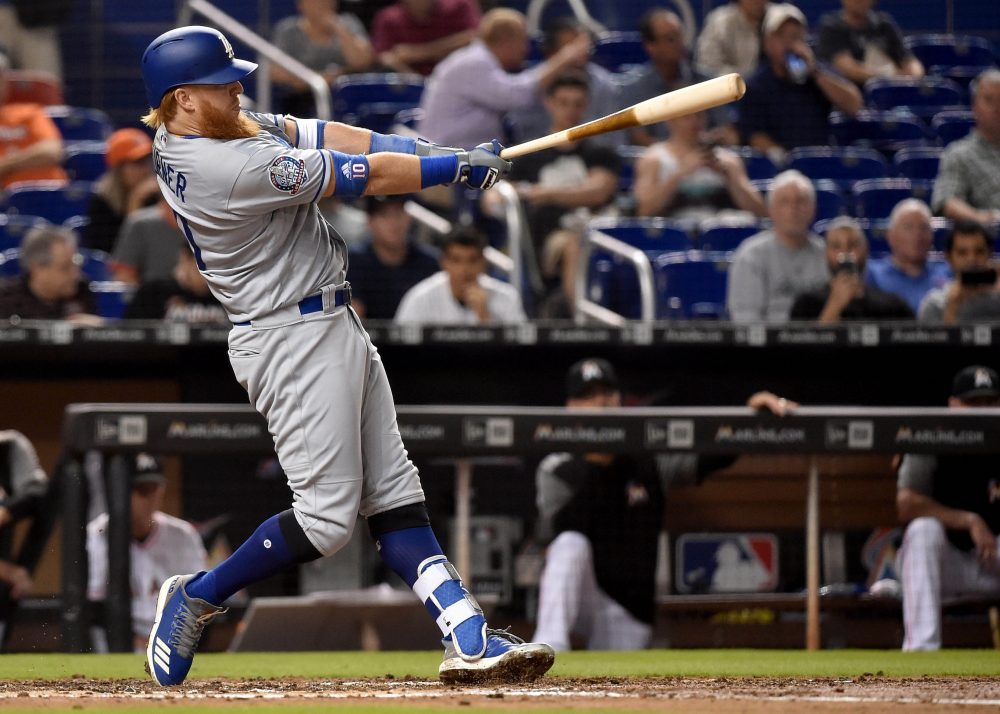 The traditional early season checkpoint of Memorial Day is around the corner and we’ve already seen a few surprises across Major League Baseball. However, the biggest shocker is the fact that the Dodgers are currently struggling like they are. Despite two other NL West teams making the Wild Card last season, the Dodgers easily won the NL West on their way to an eventual World Series appearance. After getting off to a 16-26 start heading into their Thursday afternoon game with the also 16-26 Miami Marlins, it appears that they’re going to have a massive effort on their hands to get replicate their 2017 success.

If they make their performance Thursday a regular occurrence, then maybe they can indeed get back there. Plus, it helps that Justin Turner is back and hopefully ready to return to the form that sprung him into stardom last season. Turner was all over the place in this game as he served as a menace to Miami’s pitching staff. He started his carnage in the third inning by hitting one deep into left field with the bases loaded. Turner ended up on second and the rest of the baserunners ended up in the dugout as the Dodgers went up 3-0 in the third inning.

Matt Kemp brought Turner home with a double in the third to make it 4-0, but the pain for the Marlins didn’t stop there. The Dodgers picked up exactly where they left off in the very next inning, as Yasiel Puig gave the fans sitting above The Clevelander a solo souvenir to go home with.

Turner returned to the plate later in this inning and delivered yet another RBI double. By this point, it was 7-0 Dodgers and the game was well in hand for LA.

It also helps that Kenta Maeda delivered what was by far his best start of the season. Once he exited the game going into the ninth inning, Maeda had eight shutout innings under his belt with eight strikeouts and just two hits allowed and zero walks.

Simply put, this was Los Angeles’ day and they broke what was a slightly embarrassing six-game losing streak at the hands of the Reds and Marlins in emphatic fashion. They’re not going to get masterful performances from their starting pitcher and Justin Turner every day, but if they can reach a level that’s close to that then maybe the Dodgers can start digging themselves out of this hole. But for now, they can just be glad that this latest period of darkness has ended.

The Red Sox reached the 30-win mark Thursday and they have David Price to thank for it. For 8 2/3 innings, Price had a shutout going, but he missed on the CGSHO by just one strike after Manny Machado turned a 1-2 count into a two-run homer to at least put the Orioles on the board.

This was still The David Price Show, as he got the final out of the game and finished with a complete game. If he’s going to pitch like this every time out, then maybe cut him some slack about the Fortnite stuff, please?

On September 27, 2013, Cleveland beat the Twins 12-6, but two of Minnesota’s runs came from Pedro Florimon when he hit a dinger to make it 9-2. That was the last time that Florimon had hit a home run at the major league level, until May 17, 2018, which is when lightning finally struck again for Florimon.

The Phillies beat the Cardinals 6-2, but we’re all going to remember this as the day when Pedro Florimon’s bat finally broke its seemingly never-ending slumber.

Going into the season, there weren’t too many prognosticators who were willing to hop on the Pirates’ ship. While that ship could still sink at any moment, it’s sailing very smoothly right now. They’ve won eight out of their past ten games, including three straight. The crucial moment against the Padres was an error from Christian Villanueva in the seventh inning that allowed Gregory Polanco to score what ended up being the game-winning run for Pittsburgh.

The Oakland Athletics had themselves a mini home-run derby north of the border as they put up 10 runs on the Blue Jays, with three home runs doing most of the damage. Matt Chapman and Matt Olson went deep, while Khris Davis continued what’s been a prolific season for him so far when he hit his 13th homer of the season.

Despite the fact that Cleveland is just floating around .500 at the moment, they’re still on top of the AL Central due to how poor the rest of the division has been so far. Still, the defending AL Central champions will receive a stern test tonight as they take on the Houston Astros.

While Cleveland may be off to a slow start, the Astros are picking up right where they left off from last season. Their starter for Friday night has wasted no time bursting out of the gates as Charlie Morton has been incredibly solid over eight starts. He’s currently sitting on a DRA and cFIP of 1.73 and 76 so far, which means that Cleveland will be in for a tough night Friday if Morton can keep this up.