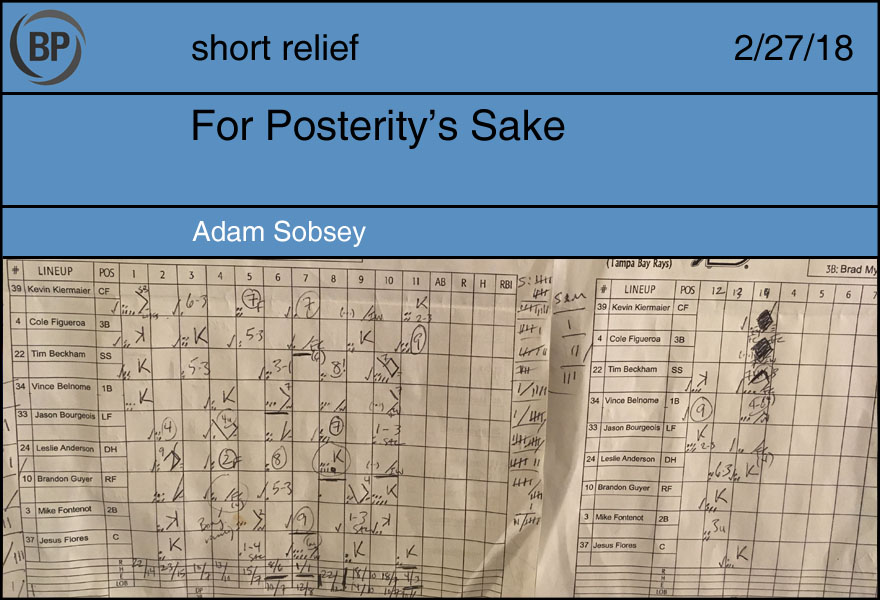 All the score sheets from the Durham Bulls games I covered in my five years as a beat writer are sheaved in file folders except one: game three of the 2013 International League Championship series between the Bulls and the Pawtucket Red Sox. It was the second-most exciting game I ever saw. (This was the first.) That may sound like a strange thing to say of a game that was scoreless after thirteen innings. A pair of decimated and depleted lineups struggled to make contact: they combined for only eleven hits in well over 100 plate appearances, and struck out thirty-three times. This was not because the pitching was dominant. Sixteen pitchers issued twenty-one walks, hit three batters, and balked once. Thirty-three runners were left on base. The Bulls and PawSox went 1-28 with runners in scoring position.

It’s sometimes said that the beauty of a score sheet is that the whole game can be reconstructed from it. That’s not quite true, and it’s especially untrue of this one. There’s certainly inherent suspense in an extra-inning game, especially when it’s 0-0, but what was extraordinary about this couldn’t be notated. It featured two occurrences I had never seen before and haven’t since. In the tenth inning, PawSox manager Gary DiSarcina came to the mound to make a pitching change, and one of the Bulls’ baserunners started yelling him. Both benches cleared. It’s the only time I’ve ever seen a player instigate a dispute with a manager. (My score sheet remarks only: “CONTROVERSY?”) 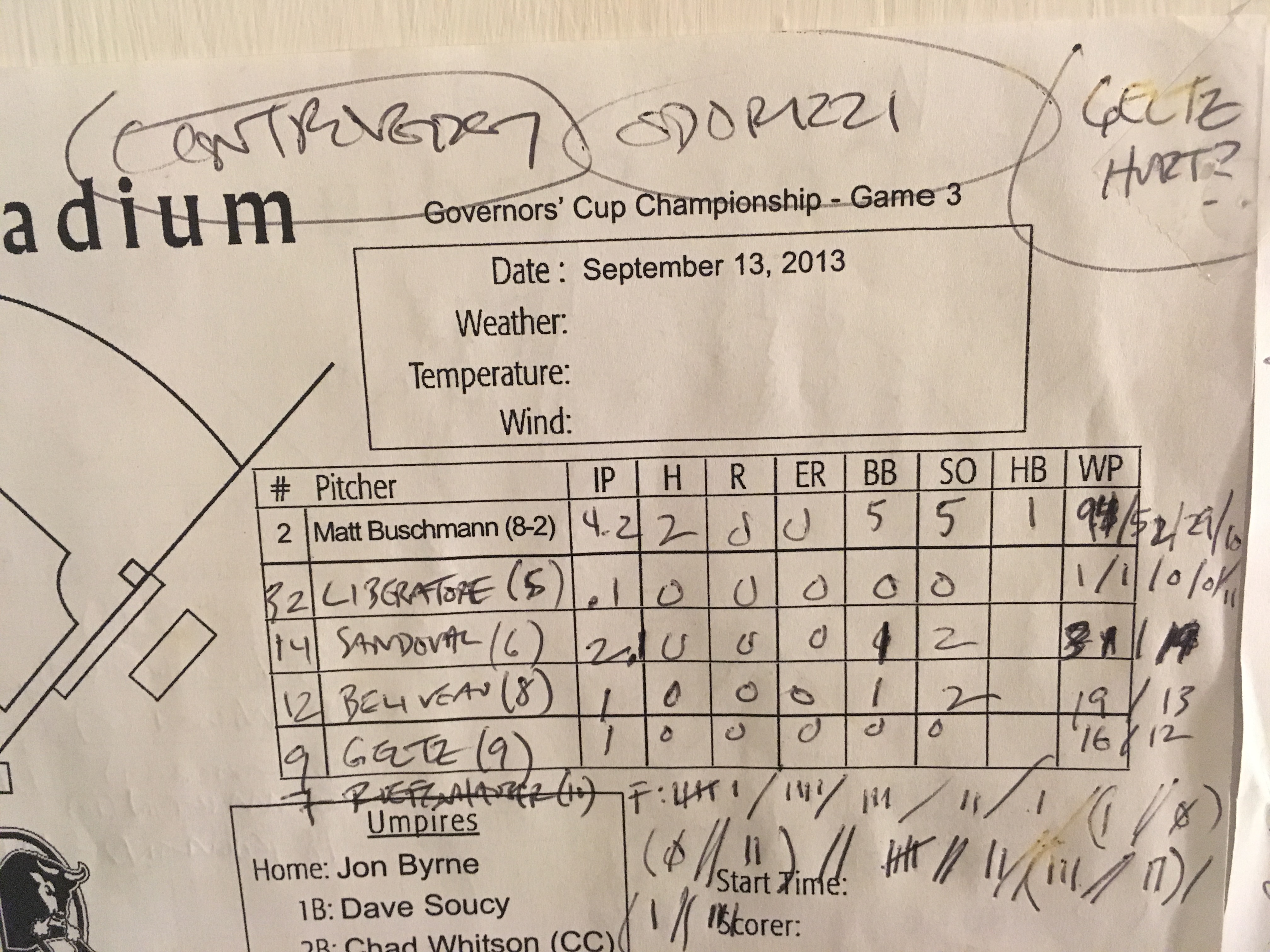 With one out in the top of the fourteenth, Kevin Kiermaier lined a ball to right field: catchable, though fairly deep; but Pawtucket right fielder Bryce Brentz seemed to misread it. He turned the wrong way to catch it and it went off his glove for a three-base error. DiSarcina ordered an intentional walk to set up an inning-ending double play. The next batter—the one who’d picked the fight with him, as it happened—hit a chopper to second base, too slow to turn two or to beat Kiermaier at home. In desperation, the second baseman threw to the plate anyway, but the catcher had run up the first base line to back up the throw there, as his training dictated; the throw sailed through the unmanned catcher’s box, past the umpire and all the way to the backstop. It’s the only time I’ve seen that, too. My score sheet simply says E4.

In the bottom of the fourteenth, two walks and a hit batsman load the bases with two outs: finally, a truly dramatic moment; but Pawtucket’s last hope struck out, for the fifth time that night. It was Bryce Brentz.

The score sheet hangs where I can see it from my desk. All the dots and dashes and numbers and letters announce the facts, of course, but when I look at them I see the unbelievable truths they can never divulge. 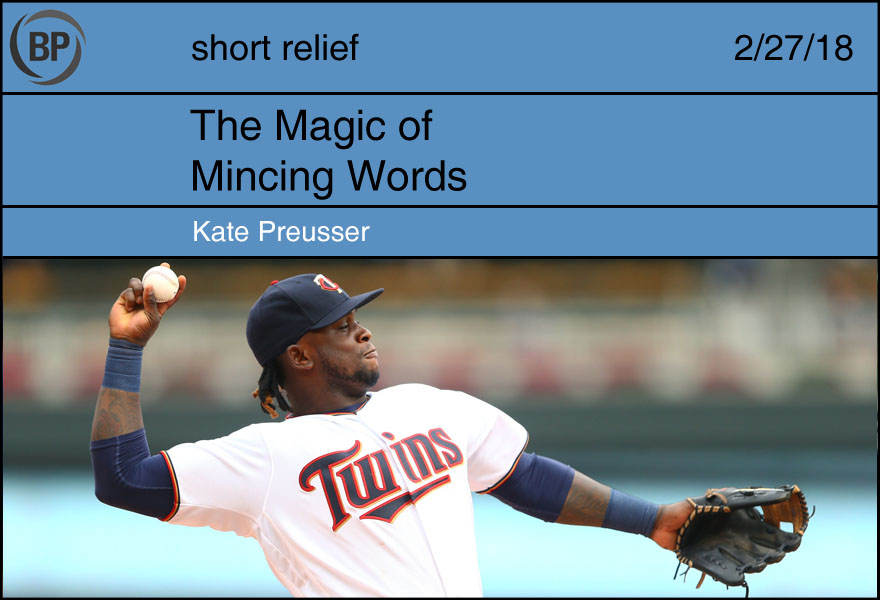 The other day the Twins’ GM, Thad Levine, gallantly described the near 300-pound Miguel Sano as having “a generous carriage” coming in to camp. A generous carriage! It’s enough to make you forget it’s a ballplayer’s overgrown ass being talked about; instead one envisions a beautiful parade float, scented with orange blossoms, surrounding a bench twined with wisteria vines and covered in rose petals. But it’s not! It’s just Miguel Sano’s thighs generously sweating in the Florida heat.

Like Mr. Levine, I appreciate a good Victorian euphemism, being raised by WASPs who would rather deliver a killing-blow via bon mot; why pillory the hippie aunt who got married in a tree when you can gently remind everyone constantly of the logistical nightmare of holding a wedding ceremony in an ancient sequoia on public land, decades beyond the actual event? Why call out the disdainful behavior firsthand when you can, like a solid American, kill with kindness? Let us all have a Thad Levine in our lives, then, someone who will temper our poorest moments with genteel language, who will paper over our human failings with kind words and understandings, and by the same token, will call out those in our lives who are falling short.

For the cheating ex: You have arrived light on faithfulness, and while you are free to pursue opportunities elsewhere, it is very late in the season.

For the sloppy coworker: Your indomitable spirit is an invaluable asset to our organization, but we must insist you clean up after your bathroom eructations.

For the bad friend: Asking everyone to join your pyramid candle-making scheme is poor form, Gwyneth.

For the callous employer, after securing a new job: Unfortunately, I will no longer be able to continue in your employ, mostly because you refused to ever get anything other than light roast for the breakroom Keurig, you penny-pinching pedant.

For the struggling pitcher: It’s a journey, not a destination. Although, currently your journey is leading you to Toiletville, Population You. Toot toot.

Outside of a university or research setting, it’s hard to have a work environment that is dominated by those considered canonically “smart.” True intelligence is often the ability to understand and react to the moment, to make things easier on other people without debasing or lying to them. No one is fooled by the phrase “generous carriage,” not fans, not front office people, and not the man himself. Calling a thing by its name might not seem like the most elegant approach, but it’s a funny thing; the truth always trumps a generous carriage.