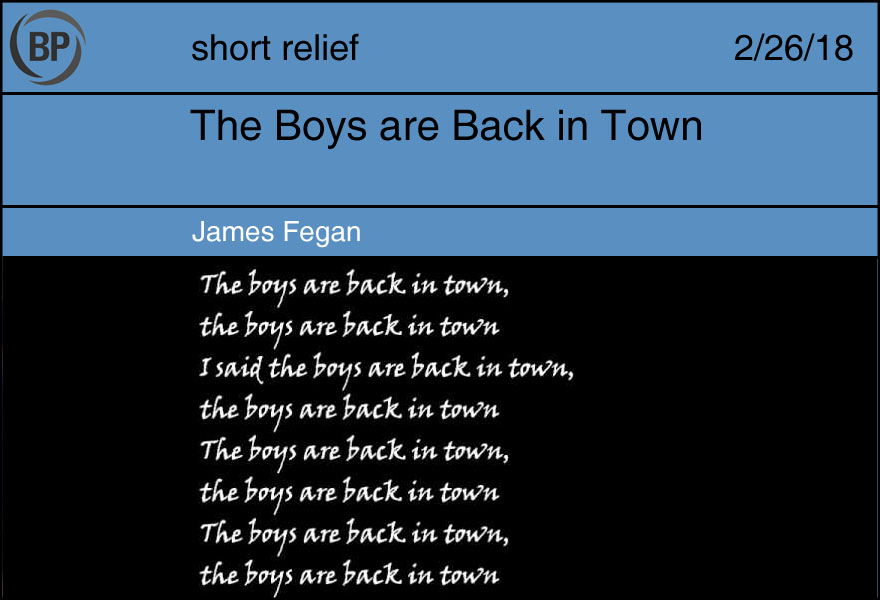 Most of the spring training stadiums have the same package of songs they cycle through every single day.

Hey, baseball is back. Major league baseball as currently constructed is played only by individuals publicly identifying as boys. And they’re back. I get it. This song makes sense.

Well, this probably still is the first game for a lot of people. Also, it’s a hell of a jam. Hell yeah, the boys are back! [excitedly grabs the shoulders of the person next to me until I am rebuffed]

I have not spent enough time pondering what this song is even describing. Some of it feels questionable.

We spend a lot of time discussing how these men are a roving biker gang, or disaffected Vietnam veterans returning to create a ruckus at a local bar, and not enough time discussing them being the dead, either descending on the world as specters of their once joyful youth, or literally rising from the grave.

Or maybe the narrator is dead, or this is his last memory flashing in his head as his hog careens off Dead Man’s Curve. Hog, meaning motorcycle, of course.

How do the players even process stadium music anymore after this level of repetition? If you played “I Can Make Your Hands Clap” in a room they were in, would they even recognize music was being played, or do they block out that sequence of sounds automatically?

The “boys” described here provide visceral thrills and their arrival makes everyone feel alive again, but they are ultimately destructive, and their transience feels like a necessity for society to survive. They are obviously baseball players, and to get specific, the Seattle Mariners. This is a song about the Mariners. One of the “boys” is probably Mike Carp.

These cretins can’t play a slightly altered version of this song with one note changed and not expect me to notice. I’m a professional.

Too bad I have to keep coming to this empty stadium everyday until the end of time to make sure they’re still playing this song. But the alternative is obviously death.

Day 7,831 of Hearing “Boys are Back in Town” at spring training

I finally understand. They cannot hear it. Only I can hear it. It is too late, too late, too late. I must…I must…Dammit, they’re back again! SPREAD THE WOR–Why do they keep leaving? Everyone leaves, my family, the boys, everyone. If only they could come back to dry these tears. 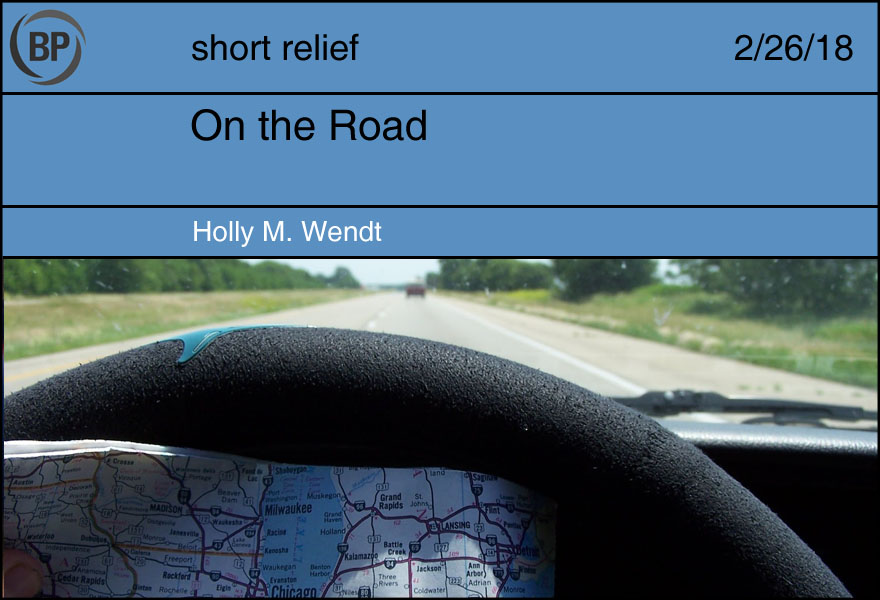 For seven of the eight teams in the Atlantic League of Professional Baseball, the baseball home to such notable figures as Jose Tabata and Alexi Casilla, the 2018 schedule is looking up. Those seven teams will play 72 of their 126 total games at home. The eighth team will play 126 of 126 games on the road. A league-run franchise created to fill the space left by the Bridgeport Bluefish, who saw their home stadium turned into a concert venue, the aptly named Road Warriors will “enjoy the distinction” of a six-month fever dream on buses and in motel rooms.

Preparing for such a season is no mean feat, but the manager and pitching coach, Ellie Rodriguez and Rafael Montalvo, are already at work. We turn to their preseason diary. They met not long after the ALPB and the Bluefish split up.

We’ve been pouring over maps of the Atlantic League, even reading books about Amish Country and the War of the Roses and Texas sugar cane and savoring names like Emigsville and Spry, sprawling around York, and all the way north to Southington and Northford because Connecticut wants us to know all of our directions. We’ll know all of our directions, we’ll go in every one, following those long blue ribbons of I-91 and I-84 and I-81, those sweet high numbers like the wins this team is going to have. We’ll make every night a homecoming and a party crashed; we’ll tell the guys, the players who sign here, though no one has joined the roster yet, even Texas will be our home. We won’t only go north, but west, the so-longed-for west, and every city in the league will give us an opening day. Fifth outfielders and utility guys, all kinds of useful, will fly to the Road Warriors, their arms like wings, and relief pitchers will hitchhike as far as they need to just to sign the papers, and those are the kind of guys we’ll want, the ones who don’t want to stay at home, who don’t want to miss out, the ones who are tremendously interested in baseball and want to know all we know. 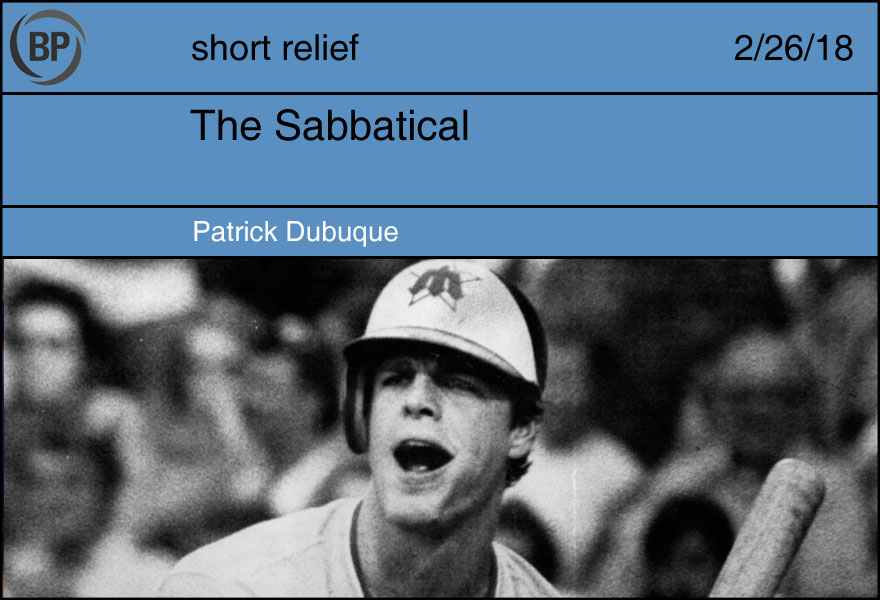 In 1982, Bruce Bochte hit .297/.380/.409 for the upstart Seattle Mariners, a ragtag bunch who hung around in the pennant chase months longer than they usually did. Afterward, the 32-year-old team rep walked into general manager Dan O’Brien’s office. The general manager expected a salary discussion. Instead, team rep and former All-Star retired.

Bochte had always been different. His nickname on the team was “Bookus,” and former teammate and friend Tom Paciorek described him as “kind of a nerd.” The 1982 Mariners team, with “Wimpy” Paciorek and “Cuffs” Caudill – so known because of his love of handcuffing things to other things, were a particularly early-SNL bunch. But Bochte enjoyed the camaraderie. He just chafed against the business side of baseball, serving as player rep during the contentious year of 1981 and paired with a particularly unlikeable foe in Mariners owner George Argyros.

And he just wanted more. Devoting his life to being a baseball player for ten years of his life, toiling in the myopia of training and practice, left the man with no time for his scientific pursuits. So he headed back to his home on Whidbey Island, an hour and a ferry ride north of Seattle, and started work in conservationism.

After a year, and freed from the threat of having to be a Mariner, Bochte decided that he missed the game and made a comeback with the Oakland Athletics. Initially it did not go well. he remarked that he was surprised at how much he had lost by missing a season, and in his 1985 Baseball Abstract Bill James ranked him last among AL first baseman, listing his strengths as “none” and his weaknesses as “hitting for average, hitting for power, and speed.” Ouch. He went on to list a series of voluntary retirements in baseball history, most of which became involuntary a year later.

Bochte surpassed them all, having one of his best seasons at age 35 (slashing .295/.367/.439) before old age caught up to him for good. He eventually moved to the Bay Area to return to his second life of solar power and sustainable agriculture.

It’s a pleasant story, but also a worrying one. We’ve all endured that first week back at work after a two-week vacation; we’ve all driven ourselves past the edge of fatigue because we’re worried that once we slow down, we’ll never speed back up again. Adam Smith drives us all to specialize, to refine ourselves, to work and toil and improve. But that same drive for greatness also shaves us into two-dimensional figures, only good for the one thing we have time to master. Bochte sought to be a three-dimensional person, and the cost was greater than even he could have expected. Life, as it turns out, is opportunity cost. The best we can hope for is to navigate it as well as Bruce Bochte did.