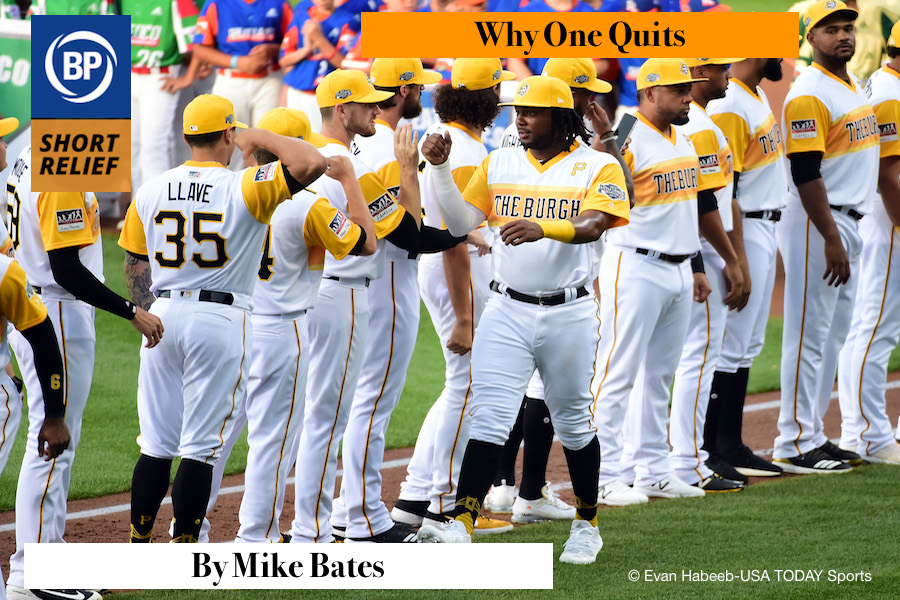 This weekend, I threatened to quit my job. Not my baseball-related job, mind you, but a different one. Without getting too specific, I had an experience with the owner of the company that was unsatisfactory and his behavior left me with a bad taste in my mouth. We have since talked and patched things up, but I’m going to be wary going forward and, if it happens again, I’m prepared to leave this gig as I leave any gig, blasting Don’t Stop Or We’ll Die’s “Once In a While” on my phone as I walk away. I don’t get paid enough to keep doing anything (sorry, Baseball Prospectus) if it doesn’t make me happy. That’s a delightful freedom to have, a silver lining to being part of America’s roughly middle class.

That isn’t the case with Major League Baseball players. Not only do they get paid too much to walk away, but their skills don’t generally translate to other industries, and the markets for the skills they do have are severely limited by MLB’s antitrust exemption, creating a paucity of potential employers willing to pay them something like a fair wage for their abilities. The collective bargaining agreement also limits them to the club that initially drafted or signed them for up to a dozen years, and they are generally are forced to stop “working” short of their 40th birthday. They simply can’t just up and say “Screw you guys, I’m going home” because their home probably doesn’t have anyone willing to pay them $10 million a year until they’ll be comfortably wealthy for the rest of their lives.

Which means there are a lot of players trapped in various honeypots. Now, you probably shouldn’t feel too sorry for them. I don’t. They’re compensated far too well for that. But you can understand them potentially feeling the honey might be sweeter in another jar, and see how the resentment might begin to grow on them until it explodes, like it apparently has in Pittsburgh this week, with players fighting coaches, and “rifts caused by envy, charges of favoritism, and outright insubordination.”

When I started writing about baseball, the concept of team chemistry was mocked. The 25 guys, 25 cabs Oakland A’s of the 1970s was held up as proof that you didn’t need to like each other to win. And it’s true. But most people need to enjoy their jobs to stay properly motivated. They need to be engaged, and that means coming to work somewhere that isn’t toxic. Toxicity costs you productivity, and that costs you games. That’s one reason why the Pirates are 6-25 since the break, and probably one reason why those A’s won 90-95 games during their title years, and not 100. 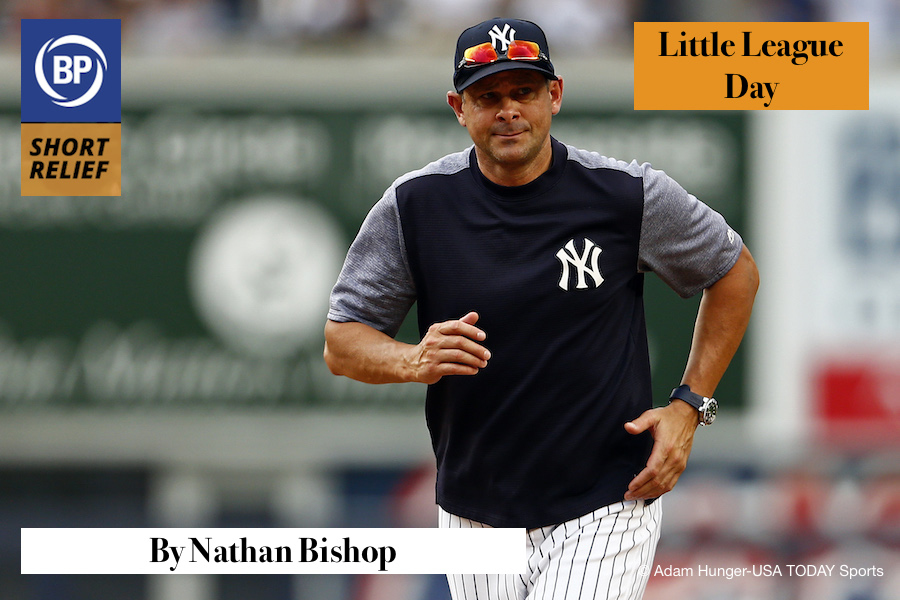 Last Thursday, after a 19-5 loss to Cleveland that saw two innings of pitching from former Mariner-First-Baseman-Of-The-Future Mike Ford, Yankees manager Aaron Boone lobbed out a trial balloon for a Little League-style “mercy rule”, saying “It’s not fun to have to put in a position player in that kind of situation.”

For the purposes of this article, I will put aside an examination into the fact that, in a game, an authority figure deemed an action as “not fun” in the same breath as acknowledging that his players “had fun with it”, and how that paints a delightfully paradoxical image of stuffy self-seriousness. Few beyond these grown men being paid millions of dollars to wear stripey jammies and write names on a piece of paper could so concisely lay out a summation of what horrors childlike joy and goofiness can wreak upon baseball’s endless twirling and twirling towards the profit-promising glow of efficiency’s lantern light.

That Boone wants to institute a rule designed and implemented to preserve the mental wellbeing of developing preteens to allow him and his multi-billion dollar enterprise functioning within one of the richest metropolises in the history of mankind to slough off the fat of the baseball schedule in order to preserve their already nearly inexhaustible resources isn’t my primary focus. I’d hate to dwell too much in a rumination on if baseball were to implement a “mercy rule”, that we should in fact go full Minority Report, hit the “Sim to Playoffs” button in April, and zoom us right to October and the good stuff. Sure, if they play the actual games the projections may end up being wrong, but it’s a miniscule chance, and the games tend to drag, and New York in the playoffs is good for TV ratings anyway. Commence the Joe Buck de-freezing process, we’ve got profits to grind through. Only on FOX!

Again, I’d rather leave a fuller discussion of these issues to my better, more scholarly comrades.

Now, let me see, what was the actual thesis of this article going to be? Oh, right. Little League Day! Aaron Boone was right, though accidentally. The big, goofy, plodding, incredibly stupid sport we love would be a lot better if it were more like Little League.

Thanks, Aaron. Hope you can find some pitching somewhere. I’m sure it’s tough out there in the Bronx. 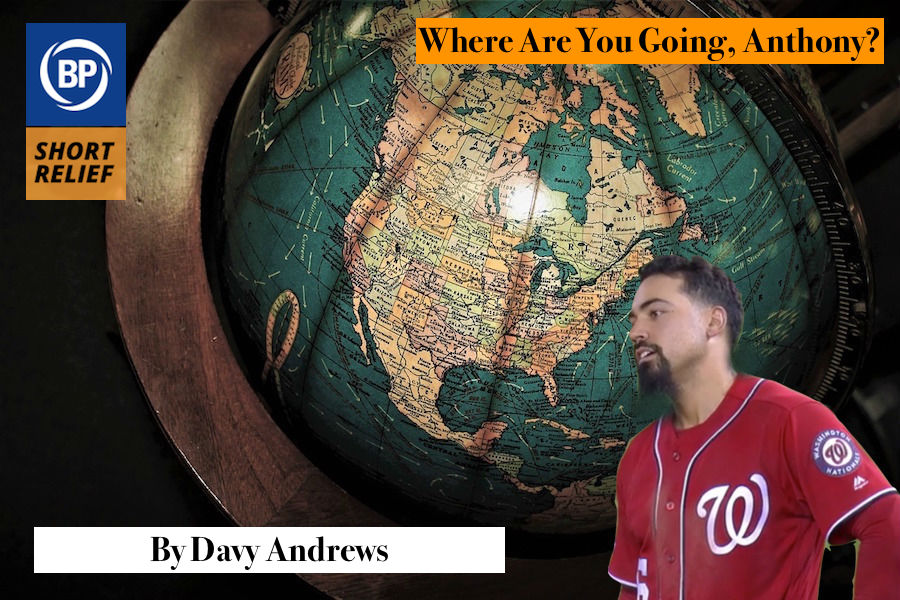 Each one of us is alone in the world. He is shut in a tower of brass, and can communicate with his fellows only by signs, and the signs have no common value, so that their sense is vague and uncertain. We seek pitifully to convey to others the treasures of our heart, but they have not the power to accept them, and so we go lonely, side by side but not together, unable to know our fellows and unknown by them.

My dad and I talk a lot these days about Anthony Rendon. Not about his bat or his glove, nor even about how he’s the most underrated underrater ever to fly under the radar. We talk about what Anthony Rendon wants out of life. With free agency approaching, we talk about where he wants to live, how much money he really wants, what’s most important to him.

I don’t mean to sound cynical. Of course we feel like we know him! I’ve been watching Anthony Rendon play baseball since my niece, Taylor, was zero years old. Now I’m pretty sure she knows some curse words. I can instantly picture Anthony Rendon collecting a routine grounder: he shuffles, he pats his glove, he submarines the ball across the diamond. I can see the oddly restrained follow through of his home run swing, like he’s playing his own separate game where the point isn’t just to hit the ball out of the yard, but to see how quickly you can bring your bat to a dead stop after you do it. I know that he loves Flamin’ Hot Cheetos. For the love of God, I remember his mullet phase.

We don’t want Rendon (we’re not on a first name basis or anything) to join another team. We want the Lerner family (whom we totally know) to offer terms that satisfy both him and his agent (tell me you don’t feel like you know Scott Boras just a little bit). So we scrutinize yet again Anthony Rendon’s innermost desires.

I know, of course, that we’re only getting part of the picture. Anthony Rendon is probably a bit more than his bat or his glove or his reluctant public persona. I also know how wrong people can sometimes be when they think they’ve got a handle on who I am. I know how guarded I can be; how easy, how instinctive it is to make yourself unknowable. How hard it is to see or to let yourself be seen.

We don’t know Anthony Rendon. Anthony Rendon, for completely healthy reasons, will not be conveying to my dad and me the treasures of his heart. We’ll gladly go with him, side by side but not together. Unless, you know, he signs with Atlanta.