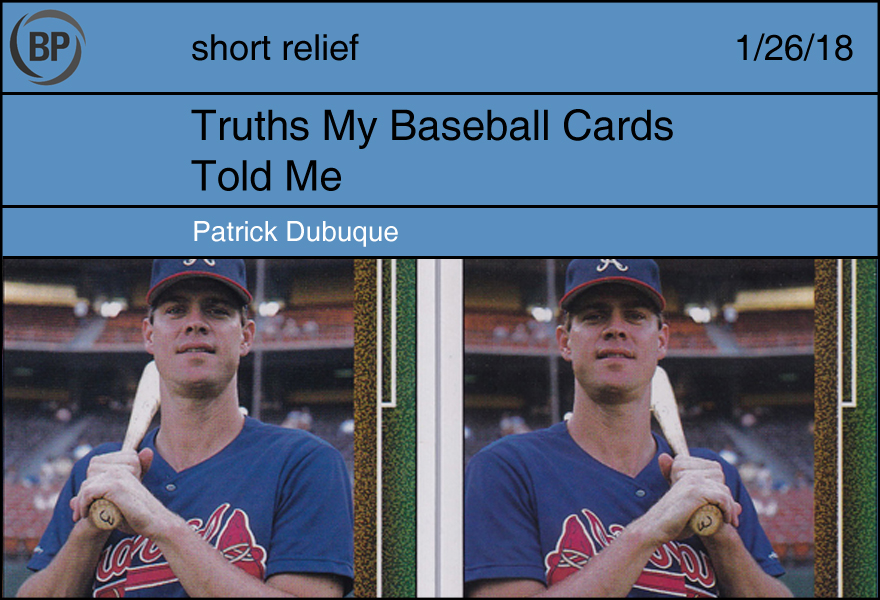 I never got the card. Top left, second from the bottom: that was where another kid told another kid he’d gotten it. I was almost eleven, just peering over the edge of adolescence, and it felt like a perfect metaphor, the cardboard equivalent of a crack of the voice. None of my friends had gotten it either. I wasn’t until later that a boy brought one to school, encased alone in the center of a nine-slot plastic page. We clenched our fists with envy. That odd, distended face, a parody of his older brother’s. The eyes, nowhere near blue enough. The smile, teeth biting down on the lower lip, frozen just before the moment of breaking into laughter. And of course, of course, the knob of the bat. 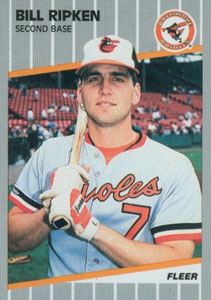 The word didn’t mean anything to me; I felt no urge to snicker the way my friends did. My father is a good man, but he swears like it’s a hobby. It wasn’t that. It was the realization that something had changed: a transgression of adulthood onto my childhood thing, one of the first holes in the veneer of innocence.

But while Ripken dominates our memories, there were other signs in our baseball cards that trouble, and puberty, were fast approaching. 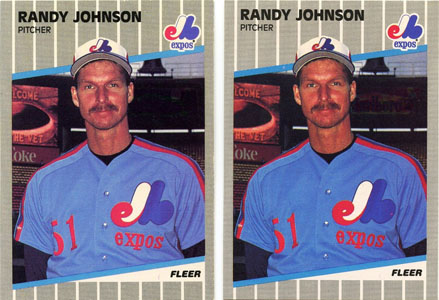 Randy Johnson, the goofy hero of my teenage years, first appeared in strange, foreign colors. But if the faint subliminal messaging of the billboard behind him was supposed to lead me to a life of nicotine, it failed. 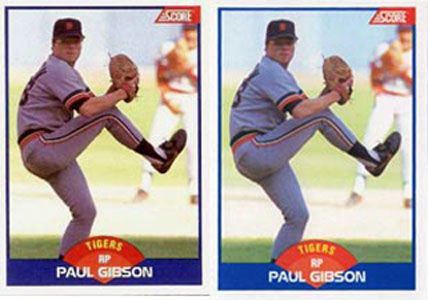 Paul Gibson was a role model to few; one hopes, at least, his children. He was, on the mound, a truly invisible man. But behind him, for just a single print run, a faceless shortstop wrestles with his own junk. 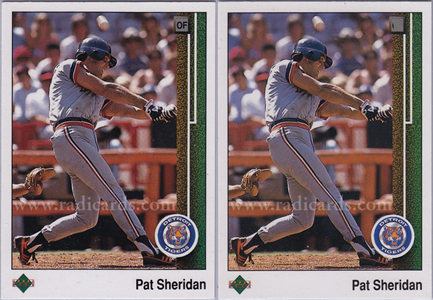 Finally, there was Pat Sheridan, whose position itself was wiped clean in an early error card. This was the adulthood I had not yet even learned to dread: not of vice, not of responsibility or weariness or even baldness. Pat Sheridan had no role in life at all. I wish, in retrospect, that had been the card that we all shuddered to gaze upon. 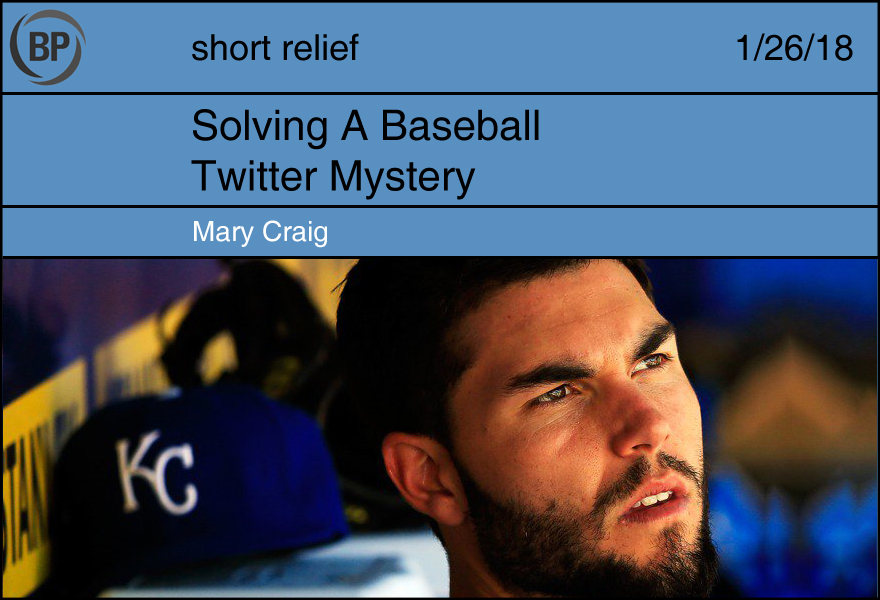 The whole scheme (he hadn’t been part of a scheme since last year’s rookie hazing–how thrilling!) began a fortnight ago when “collusion” popped up in discussion. He wasn’t entirely sure just what the term meant, but the important part was that players weren’t getting their money, including him. With Spring Training rapidly approaching and dozens of free agents still unsigned, it was clear they had to do something. Of course, that something needed to be subtle, untraceable, no more than a reminder to teams that they were, indeed, allowed to do more with free agents than “engage in talks” with them or “show interest in” them.

The exact details of the plan he was not privy to, as it was decided the fewer who knew them, the better. How he was chosen was unclear, other than the fact that his attachment to this team was one of the more widespread rumors, and it was unlikely teams would be willing to think too outside the box. But once he was chosen, he couldn’t say no. Until this point, his entire life had been laid out for him. Dedicate your teens to getting drafted. Sign the contract with whoever drafted you. Work your way through the minors. Play your way to free agency. This was supposed to be the year that ended, but for whatever reason, it wasn’t. And this seemed like his one chance to regain control. So, yeah, he was all in. 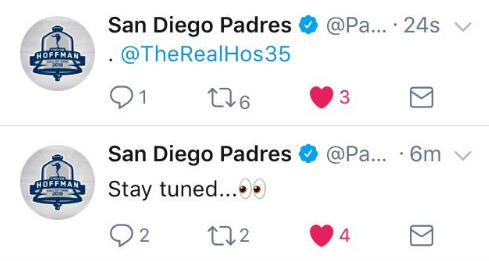 Two tweets to change the landscape of free agency. How absurd. And yet, maybe not. 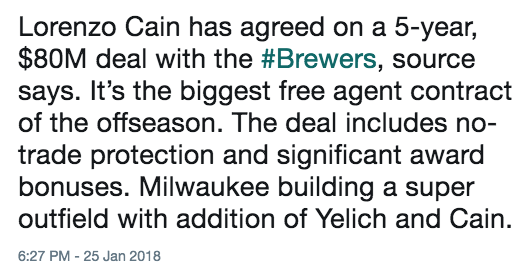 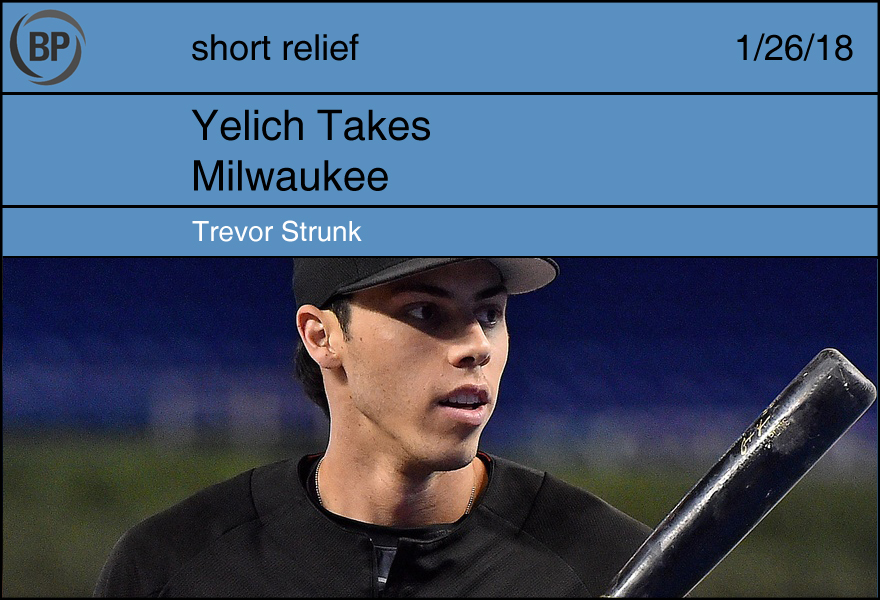 Hey have you guys seen this have you guys heard about this? Christian Yelich — formerly one of the hottest up and coming prospects in a loaded Marlins system and more recently a solidly hitting, good OBP, power and speed guy you could slot into your 3-hole and forget about — has been traded to the Milwaukee Brewers. I know, you’re surprised. The Marlins? Trading a young star? In 2018? Well, it happened, and we’re here to break it down.

Oh, not the return. Haha. No, no, there are people on this website much more qualified to do that than I am. What I’m here to break down is the potential fit of Young Christian in one of the Northernmost baseball climes he could play in. How will Yelich make the cultural transition from Miami to Milwaukee?

Well, first and foremost, I’m sure he’s thinking about baseball. And good news: Milwaukee has a professional baseball team called the Milwaukee Brewers (note: did I cover this already?). Yelich can look forward to a much more hitter friendly ballpark, a fun-loving mascot, and Bob Uecker making fun of him constantly. Downside? No postmodern hell-sculpture to look into and see one’s own mortality.

Next, Yelich might be wondering about the nightlife in the jewel of Wisconsin. Well, you might not have the glitz and glam of a Miami scene, but I can promise you this: if you like your meat in tube form, you will have plenty to enjoy. Not to mention cheeses, mustards, and the blared sounds of Bruce Springsteen from a lakeside bar. Yes, in and just outside of Milwaukee has enough fun for anyone, provided they are about 37 years old and not watching their weight.

Finally, Young Christian may be wondering about the drinking scene in Milwaukee. I’m afraid he’ll have to say goodbye to Rum cocktails and spicy Cubano tortas, but he can say hello to beer! Lots and lots of beer. Why, enough beer to flood the city, washing away every tubed meat and Uecker bon mot one could want. The sudsy brew that you love to chew, it’s beer! And now beer is synonymous with Christian Yelich.

So while our protagonist may be worried about the cold and largely Jeffrey Dahmer based cultural memory of Milwaukee, fear not! Your new city is hip and fun, and often intoxicated enough to welcome anyone into their bosom. Especially if you can go 20-20 and sneak them into a Wild Card. Good luck, my friend, and save some brats for the rest of us!