You sit in the ruined vestiges of what was once your home. You are shivering, your clothes long ago tattered beyond recognition; when you look at your hands, the skin is the same shade of grey as the suffocating cloud that hangs fixed in the sky. The hunks of disintegrating concrete you are huddled in are all that is left of your old life. You no longer care for the things that once consumed so much of your attention, the TV shows and books and televised bat-and-ball sports. All you have the energy to care about now is survival.

You don’t know how much longer you’re going to last. 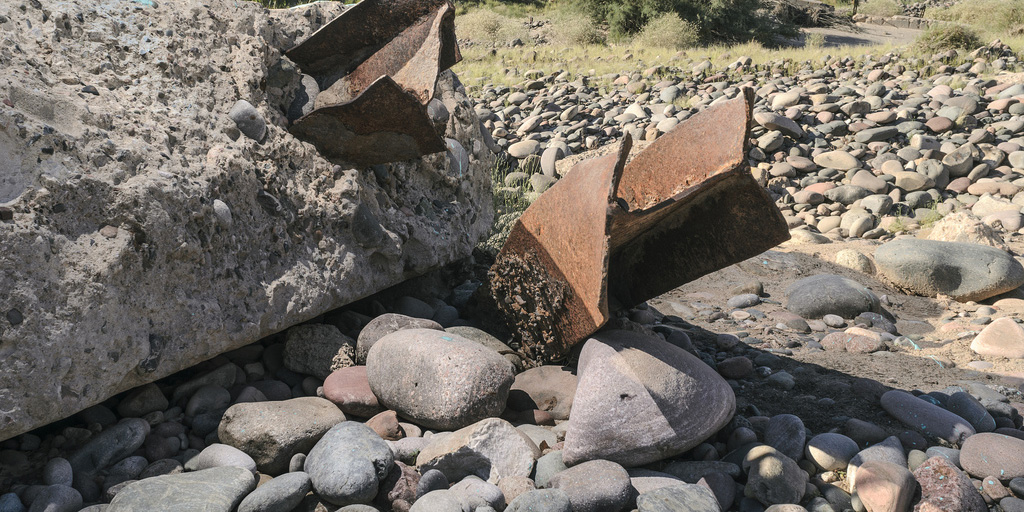 You pull yourself up off the ground and begin to move, haltingly, though the path you are walking is familiar— it leads to a well-hidden stash of canned food that you discovered some unknown length of time ago. You only eat when the hunger is unbearable. There are not many cans left.

You trudge slowly, painfully, each step a burden, the impact of every footfall shooting up through each bone in your body. So you look around, check make sure that you are passing all of the landmarks you always pass. There’s the Big Rock With The Crack Down The Middle. There’s the Weird Spindly Bush. There’s the Shredded Sort-of Yellow Plastic Bag.

This game helps you feel less afraid. You are always afraid, even though you have no reason to be. You know there is no one else.

Out of the corner of your eye, you see something strange just ahead of you on the ground. Something unfamiliar, something that doesn’t belong here. A small, dark rectangle.

You can hardly let yourself believe your eyes. It is unmistakably a cell phone.

Your heart pounds as you pick it up, trying not to let it fall from your shaking fingers. The screen is all cracked up to hell, covered in dust, bits of dirt embedded into each first fissure. It can’t possibly work. It would be unimaginably stupid to hope that it works. You press the home button anyway.

The screen flashes to life, the brightest light you’ve seen in a long time. It takes a moment for your eyes to adjust, and another moment to parse the text on the screen: MLBTradeRumors.

The phone seems to be frozen on that one page. Despite your frantic efforts, swiping and pawing at the screen, you cannot scroll down, navigate to another site or to the home screen, use the phone to communicate in any way. You were right: it is useless, broken. It was foolish to get your hopes up. You have wasted your time.

But, despite yourself, you begin to read the various hot stove rumors, barely legible. Who won’t waive his no-trade clause. Who’s in on who. Who’s interested and who’s not. It is strangely mesmerizing. For a moment, you forget that this isn’t normal. You forget that you are no longer a person who cares about the hot stove, that there is no longer a hot stove to care about, that you and your world are a ruin.

And then you notice: the dates on the posts are a year after the last date you remember, the day after it all happened.

Your chest tightens, and for the first time in a long time, you feel like you might cry. Because somewhere out there, somewhere you might be able to reach someday, there are people, and there is baseball, and the Blue Jays are still interested in Jay Bruce.

My girlfriend and I have been watching Lost for the past few months. This is her second watch-through, though I can’t recall if she petered out before finishing the series; she’s a voracious TV watcher. I, however, am consuming this passe, former touchstone for the first time.

Because it’s 2017, and Lost aired from 2004 to 2010, there are many things that appear sort of ridiculous in terms of “prestige-lite” storytelling. The show establishes its characters well in season one only to discard many of those characters’ traits in season two for the purpose of further enmeshing them, and therefore us, in a deepening, widening mystery. By season four, we’re treated to flash forwards, a clever twist on the well-established flashback format the writers employed heavily (and with increasing absurdity) to develop characters, or, more insidiously, retcon character traits. It’s these bizarre, brazen choices that have inspired us to deem the show “Lorst,” in a similar vein as “Barves” or “Cubes.”

The flash forwards reward the viewer, however, and prove to be a very useful device in two ways. First, they shift the weight of the dramatic irony that is the foundation of the show: we often know what certain characters don’t, characters purposefully—and inexplicably—withhold information from each other, and characters know things that the viewers don’t. With flash forwards, the irony is heightened, as we know a select group of characters leaves the island on which they are stranded and eventually resolve to return to that island in order to save their friends.

The second benefit of the flash forwards is that it saves us several episodes of agonizing time on the mainland with the characters who escaped the island. By flashing forward all season, and then dragging the “current” narrative up to our flash forward time period, the show manages to give us this information without removing us from the show’s mysterious, essential location.

Flashbacks are a necessary part of the baseball season. Through their feats, the seemingly inhuman and the excruciatingly human, we are forced to confront the past; we are continually comparing current players to former players, current players to past performance, often in pursuit of a shred of clairvoyance. Flash forwards have yet to grace the pastures and palaces in which baseball is played, and we are condemned to the Gatsbyan work of cobbling together edifices to the past while clinging to a hope that those efforts will bear a different future.

To reign it back in, though: Lost, in its creative use of the flash forward device, spares us a slog. Baseball is afforded no such mechanism. Even though we weave stories with bits and pieces of the past in order to imbue our viewing with meaning, there is no way to experience simultaneously the excitement of the playoffs and the plodding dread of the offseason. There’s no way to pepper in the freshness of Opening Day among the sweaty dog days of a lost season. The narrative beats are well worn, and we are required to abide by them.