It’s a banality by now that one could point to any number of consumer goods that mimicked the game of baseball throughout the twentieth century. Sure, there are any number of iterations of The Show over the past couple of years, and yes, sure, pinball and tabletop games date back to perhaps even the late nineteenth century. 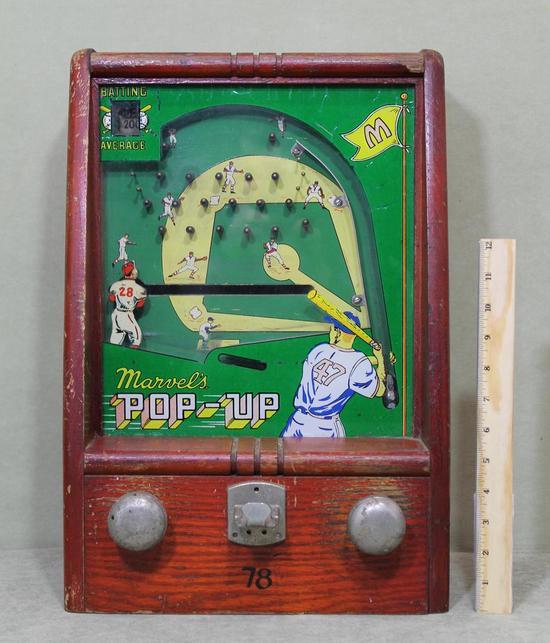 This device, a “Marvel” Pop-Up Baseball simulator, variously dates any time between the early 1930s and the mid 1950s. They are coin operated, and supposedly many have stamps on the back of the steel in that section that date it to the heyday of the great depression. Nevertheless, my intuition is that this particular pictured version comes from sometime in the mid-1940s, based on the font choice and inclusion of jersey numbers (most teams had numbers on their jerseys by the late 1920s, but the Philadelphia Athletics held out on their home and away uniforms until 1937).

The glaring question: why simulate baseball? By the late 1930s, most the east coast from Pittsburgh to Boston was under the spread of radio broadcasts depicting the game, universalizing access for rural areas which heretofore only had access to oral myth or the newspaper descriptions we’ve already covered here. Was there something about using the game as a mask for other forms of small-time gambling in pubs–an important foundation of the game’s heritage? Why make this, essentially, pinball game a baseball game?

We often valorize these golden years of baseball as some kind of pure episteme–in the days before steroids, seven-foot musclemen, or annoying crap like wRC+. Maybe, perhaps, we let the game’s aura rust with stories of Ty Cobb’s racism, stolen signs and drinking in the dugout. I wonder, though, why so little seems to be written about the signification of baseball as a cultural form completely outside the legitimated forms found on the sports pages or grounds of Ebbets. While a device such as this seems to mask a cheap coin game in the skin of a baseball painting, it, in a way, presages the fantasy games which would come sixty years later–an effort to expand the aesthetic beyond what is immediately available in the grass and dirt.

It’s not for nothing that I’d put money on someone’s baseball fandom emerging from the use of a small consumer good such as this–especially in the era before television. The question, then, is where does this go in the decades that followed? Might there be a kind of index that emerges once the actual, league sanctioned game itself is able to be represented? Or even more importantly–precisely how is this wooden box any different from the game we all watch even to this day?

Wedding hashtags capture some of the very worst impulses of the marriage-industrial complex. They exist not for any purpose related to the actual wedding, but for showing and packaging the wedding as a social media event unto itself. They are not about the couple or the guests, but about everyone else. They are often forced and overly cutesy. The puns are usually terrible. A couple can spend way too much money on one if they cannot be burdened to come up with a hashtag themselves.

But for all their faults, these hashtags can also be quite practical for people like myself who enjoy witnessing weddings on social media from afar. I do not have to wait for the bride and groom to post the actual professional photos (that can take foooorever), and I do not have to try to figure out key members of the guest list to manually check each of their Instagrams one by one. I simply get ahold of the hashtag and scroll to my unreasonably curious heart’s content.

Mike Trout got married this weekend, using the hashtag #TroutsBestCatch. (Fine, though not quite as good as the one used by his brother, Tyler, who is currently engaged and using the hashtag #OneLessTroutInTheSea.) It’s pretty unremarkable on the surface; the wordplay is cute, if generic. But there is something notable here, at least insofar as anything related to these hashtags can be notable: Trout’s is the first MLB wedding hashtag I could find that includes a baseball reference, or at least something that could be read as a baseball reference. It’s also among the best in recent baseball wedding history, which is not a competitive division at all.

Bryce Harper played it straight with the to-the-point #MrAndMrsHarper. (Chipper Jones also took this route for his third wedding, two years ago, but at least #MrAndMrsJones has a little more depth to it.) Elvis Andrus went with a sweeter version of name-listing by mashing up his with his bride, Cori’s, to make #CorvisWedding. Danny Espinosa, who had his wedding on a ranch, got real creative with #EspinosaRanchWedding. Justin Upton was way better than Melvin Upton, as anyone should be able to tell when comparing #OnceUPTONaTime to #JustMelvined. Hunter Pence did #HappilyEverPence, which I stared at for quite a while assuming it was some sort of pun, but no, I really think it’s just “Happily Ever After” but with “Pence” replacing “After.”

They’re all fundamentally silly, just some a little more so than others. But as far as they go, #TroutsBestCatch? Pretty good. Though not as good as this photo that the hashtag allows you to find, of Jered Weaver wearing a comically undersized hat:

You need to be logged in to comment. Login or Subscribe
tearecrules
If she took a Trout from the sea I hope they weren't planning on having kids; trout spawn in freshwater.
Reply to tearecrules