I Just Want to Sit Down

I’m all for exercise, but it’s important to be able to sit down. The world wears us out, and we ought to be able to take a rest. Not being able to sit is why I got tired of living in New York. You’re constantly battling past people there–on the subway, on the sidewalk, in line for a promotion at work. You do this battling, get jostled about, and then you go out with friends to unwind, only to have to keep standing. You wait for a table, and you have to stand by the door. You decide to have a drink at the bar while you wait, and again you stand, holding your coat, clutching your credit card. You keep getting bumped by the waitress, which annoys you and her. All you want is to sit, but you can’t, and you’re worn out. Also, it’s loud. You’re shouting. We make terrible choices in our twenties.

The world should let us sit down. It’s part of why I enjoy baseball. It’s leisurely. If the park isn’t full, you can put your feet up. The action is slow; you can relax but still be moved. You only have to get up to holler when your team hits a home run, or wins, or if it’s a close game late, and not even always then. Your fellow fans also want to sit, and you’ve agreed not to block their view. You have a social contract. You’ve formed courts. 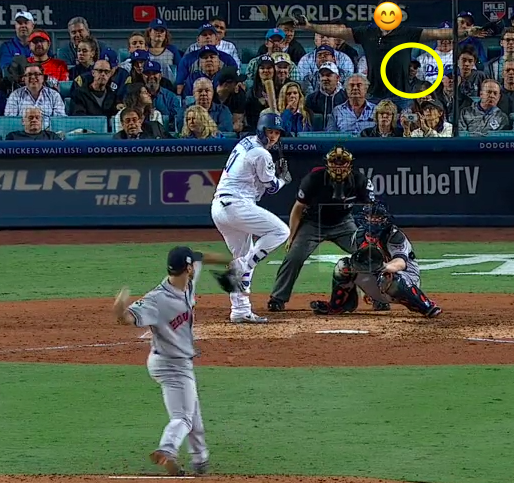 It’s the fifth inning, Chip. I know it’s the World Series, and you’re excited because it’s a 1-0 game. You think standing for every pitch of Joc Pederson’s at-bat is just normal fan stuff that guys do. But you’re forgetting about Bob. There’s Bob. 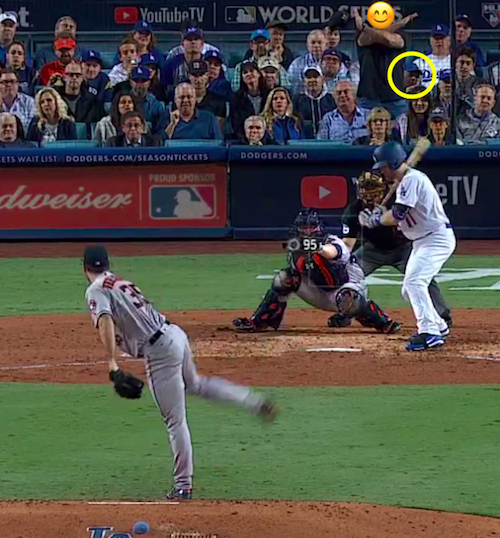 Look at Bob’s face. Bob can’t see without craning his neck. Marlins Man can see better! Chip has forgotten about Bob, but really, he’s neglecting all of us. He’s broken a promise. He has forced Bob to make choices. Bob can be a grump, and tap Chip on the shoulder and ask him to stay seated. Bob can do that, but then Bob is being uptight. A bad sport. Perhaps, Chip will whisper, a bad fan. Bob can complain to the usher, but then he’s a snitch as well as pusillanimous. Or Bob can stand, too. Bob can stand, forced to like those behind him, until everyone is standing. Chip has turned his whole body into an oversized vase or a comically large hat full of fruit. He’s imposed upon Bob an obligation to make a bad choice. And all for a couple of flyouts and a strikeout looking.

There are many things we do to have a civilization; farm, vote, fall in love. We write books and fight with each other, and cheer for our teams. We do all of that. But we’re well served to remember that among the most basic things we do is let each other sit down for a little rest. After all, the world can wear you out.

The Style of Baseball’s Rulebook

Beginning with the 2015 edition of MLB’s Official Baseball Rules, the first page of the book designates an editor. In each of the three rulebooks published since, that editor has been the same: Tom Lepperd. Lepperd is an umpire supervisor who formerly served as director of umpire administration and has been working in professional baseball for more than four decades, though, so far as I can tell, not in any writing or editing capacity. (His college degree is in mathematics education, and he was a high school math teacher in Illinois before attending ump school in the 70s.)

There doesn’t seem to be any information publicly available about why MLB created this editor position or what, exactly, it entails; it’s unclear whether Lepperd is tasked with editing the manual for style or grammar or just for simple consistency in baseball principles. For the purposes of this exercise, though, that doesn’t matter so much—I’m interested in those questions, generally, but for now, I’m specifically interested in some of the stylistic choices displayed.

The Use of Exclamation Points: There’s precious little of either. The Official Baseball Rules are serious business, the law of the land, not a place for emotion or doubt. There are exactly two exclamation points, the first found in Rule 5.01. 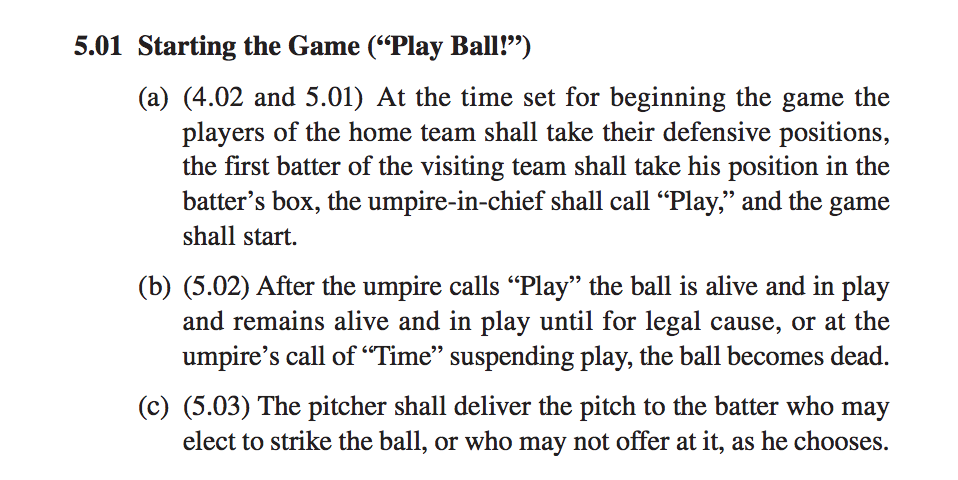 (Of note, if you’re interested in noting stuff that’s very minor and likely meaningless: that the header here specifically and enthusiastically says “Play Ball!” while the rest of the section simply says “Play.” If the phrase is really so important that it gets one of the only exclamation points in this entire hundred-plus-page rulebook, does it not merit being used in full throughout its own section?)

The second and final exclamation point is in one of the last sections of the book, “General Instructions to Umpires.” It can be found in the third-to-last general instruction: “But remember! The first requisite is to get decisions correctly. If in doubt don’t hesitate to consult your associate. Umpire dignity is important but never as important as ‘being right.’” Probably just an indicator that whichever member of the official rules committee wrote this section however many years ago felt a tiny bit more strongly about this point than the others, but maybe a comment on how expressing what is right—with however much emotion it requires—is worth more than your dignity.

The Serial Comma: SABR’s baseball style guide is very explicit about its endorsement of the serial comma. It’s literally the first thing it mentions. The Official Baseball Rules does not feel so strongly. At first, it does not use the serial comma, and then a little bit later in the book it starts working it in, and then it’s just a jumble. Inconsistent. It would not seem that the Official Baseball Rules care about this. That’s… fine. I guess. [Editor’s note: it’s not. The serial comma is terrible, stilted, and valuable for exactly one thing: clarity. Clarity’s pretty important for a rulebook.]

Use of Numbers: This one is also inconsistent. Most numbers over 10 seem to be written numerically, rather than spelled out, as is SABR style (as well as the style of many other systems). But not always! “The catcher may wear a leather mitt not more than thirty-eight inches in circumference, nor more than fifteen and one-half inches from top to bottom.” “Benches shall not be less than twenty-five feet from the base lines.” This is simply not a concern of the Official Baseball Rules, which is not the worst thing in the world, but one must wonder about the lack of order in a document created for order’s sake.

Descriptive language: The Official Baseball Rules are, for the most part, dry. Very much so. They’re not exactly what one would call fun reading. But there are some gems, sprinkled throughout: the fact that umpires must avoid “thoughtless familiarity” with club employees. The phrase “thumb crotch,” to describe the… thumb crotch of a glove. The scare quotes around warned, in reference to a pitcher intentionally throwing at a batter: “If, in the umpire’s judgment, circumstances warrant, both teams may be officially ‘warned’ prior to the game or at any time during the game.” The use of the word expectorate in describing what a pitcher cannot do to the ball. The phrase “net type of trap,” as in “the webbing may not be constructed of wound or wrapped lacing to make a net type of trap.” It’s all very delightful—not quite consistent with the editorial voice, maybe, but better for it.

Sometimes There Is No Baseball

Sometimes there is no baseball. Sometimes you find yourself sitting in a plastic lawn chair in a mini-mall outside a martial arts place while your daughter is inside kicking inflatable objects, and growing up, and the sky is that mudcolored dark just after sunset but before night, dark except the light pollution of the cars rolling along the street like a zoetrope. You sit there not listening to baseball. You forgot a pencil, but that’s okay because you don’t have any paper, so you whisper into your phone, random inelegant phrases, dreading what the recording of your voice will sound like.

Sometimes there is no baseball, and nothing to do, and they never told you how much time you would spend not doing anything, while you have no time. There are Christmas lights to hang and it’s already December and it’s already dark and if you wait much longer to hang Christmas lights it’ll be too late and you’ll just have to take them down. You didn’t get to them last year. You probably won’t this year. You live a life where Christmas lights are out of your reach, as a person: you are not capable of them. And yet here you are, thinking of novel ways to describe the sky, and there isn’t even any baseball.

But the alternative: you could be hanging the Christmas lights right then, and be done, and then there’d be something else, equally important, equally forgettable. You could be living all the time, sleeping four hours a night not because you son has been breaking the same molar since the Angels were in contention but because there’s so much to do, to get done. You could be listening to baseball all the time, worrying about the next game and the direction of your favorite team, until the moment you died.

You can hear your daughter laugh; hers is the only one that pierces the walls. It’s probably not a good sign, or maybe it is. You don’t know. You’re tired. If there were baseball, you might not have heard it. Life is best when you’re not allowed to live it every moment, and you’re stuck waiting around for it for a while.