Hunter Pence and the Good Death 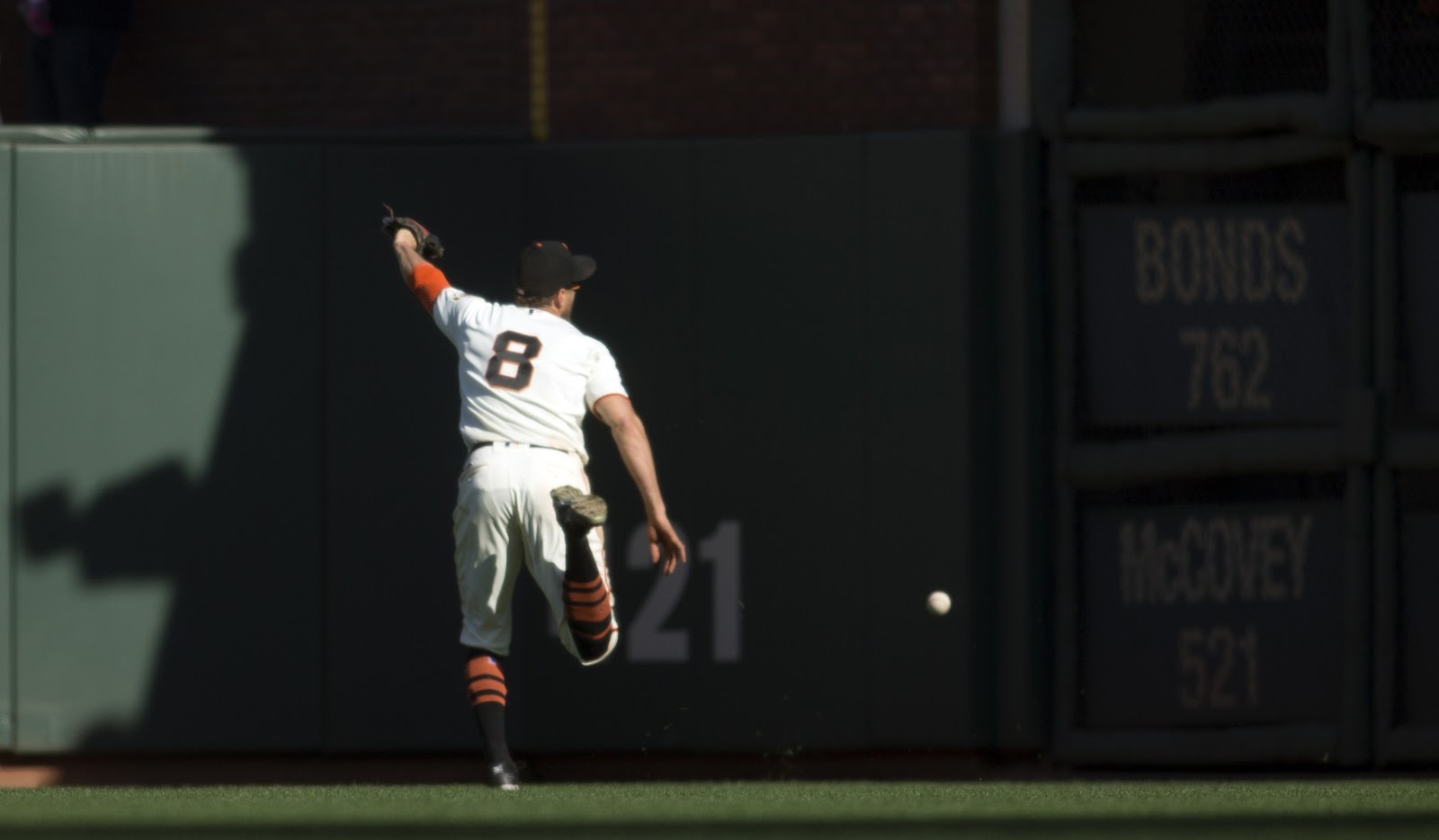 I learned a lot from reading Caitlyn Doughty’s Smoke Gets in Your Eyes, but my primary takeaway was this: Americans are bad at death. In her book, Doughty details various cultural practices and rituals around earthly departure, and continually circles around to the fact that what Americans practice isn’t death, but a denial of death. We pump our dead full of embalming fluid and dress them in their finest clothes; we paint their faces and praise the mortician when the body looks lifelike. Our cultural fear of death, argues Doughty, leads to an absence of the dignified death, the “good death.” We don’t have the kinds of important conversations about advance directives and the like that we should have, and we don’t always support the rights of those living in extreme, daily pain to end their lives in ways that are peaceful. And it’s not just those who die who carry this burden, but more often, those who are left behind to cope with the trauma or expense of modern America’s attempt to defy death.

Burial is still the most popular option in the US, a largely Christian country, but cremation is becoming more common. This has led to new laws being passed about where human ashes can be scattered, with each state bearing its own idiosyncratic regulations: not on beaches, but acceptable 500 yards from shore; in certain areas of public parks, but not near roads, and not in Central Park; and certainly not on private property, like Disneyland (still a popular location with what’s known in the industry as “wildcat scatterers”). Stadiums seem to fall under this rule as well, despite often being funded with taxpayer money. The argument against ash-scattering in popular natural destinations is that high mineral concentrations in the ashes can disrupt plant life, which makes sense if you’re interring an entire bag of ashes, but a handful of ashes scattered across the field shouldn’t have any devastating natural impact. It’s easier, though, to just disallow it, forcing families to either abandon the idea of scattering their loved one at a favorite place, or go rogue, scattering covertly, without ceremony. What MLB should do is offer an opportunity at the end of every regular season to release a set amount of ashes in a ceremonial, dignified way. But that would require allowing death a seat at the table, and Americans just aren’t very good at that.

After Hunter Pence wore the ashes of deceased Dodger fan Henry Janiszewski in a necklace when the Giants played at Dodger Stadium, I expect MLB will come out with some rule barring players from doing that again. As is so often the case with releasing a loved one’s ashes, it’s easier to ask forgiveness than permission. It’s too bad, too, because there couldn’t be a better player to do it than Hunter Pence, who relished the opportunity to be “an instrument of the spirit.” But what a beautiful moment to have: to lay aside a division rivalry to allow one last ride for Henry at Dodger Stadium, in the best seat he’s ever had.

Being very, very good at one thing in particular does not mean that you’re very, very good at most things, or even at many things. But it does tend to mean that some of the things you’re not so good at will matter less. The halo effect and all that. If you’re this good at something that so very few people are any good at in any way—something like, say, using a bat to crush a tiny ball traveling at triple-digit speeds—then how bad can you really be at anything else? (The logic’s suspect, sure, but so is most of the logic around how people typically think about being very, very good at anything.)

More to the point, maybe: when do you have the chance to be bad at anything else? You can deliberately carve out space to take chances to be bad at things. But why would you? You have a whole life built around being very, very, very good at something! If you’re, say, Bryce Harper, you were crowned a ridiculous generational talent as a teenager and have spent every year since working to push that ridiculous generational talent to take new forms and reach new heights.

Your life is not necessarily full of all the ordinary chances to show off how bad you are at something. You probably don’t have to use your terrible singing voice at a weird karaoke night with your coworkers, or reveal that you’re actually really bad at ice skating on that first date, or get screwed over by the fact that you can’t do the simple arithmetic to balance your checkbook. You can find things to be bad at, yes. But talent and money and fame have a way of making sure that they don’t find you in quite the same way they find most everyone else.  Take, for example, the archetypal poorly-dancing athlete: even their mediocrity is accepted as brilliant comedy. There’s no way to lose.

Harper’s wife, Kayla, posted some pictures of her birthday celebration this weekend. One shows what looks like one of those group painting classes where everyone paints the same thing, one step at a time, so that it will be impossible to mess up and everyone finishes with the same picture-perfect result. That’s how it’s usually advertised, anyway. It’s actually very possible to mess up (source: I have done this and messed up), and everyone’s is always going to look a little different.

Harper’s painting is not bad. Not by any stretch! It’s certainly not the worst one pictured. But it’s not particularly good. It exhibits all the qualities one would expect if one were to describe it as “cactus set against desert sunset.” It’s just not eight wins above your replacement cactus. 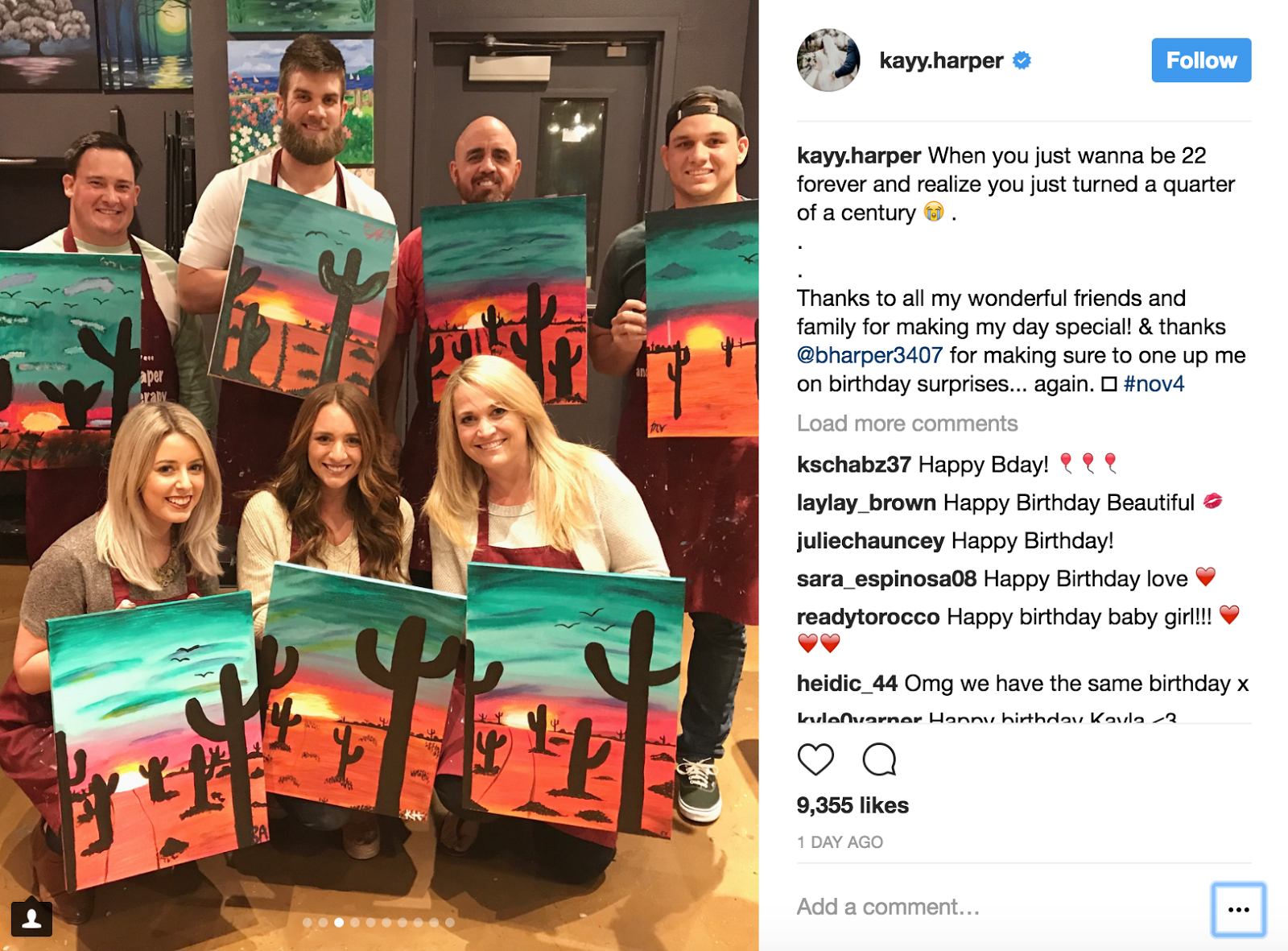