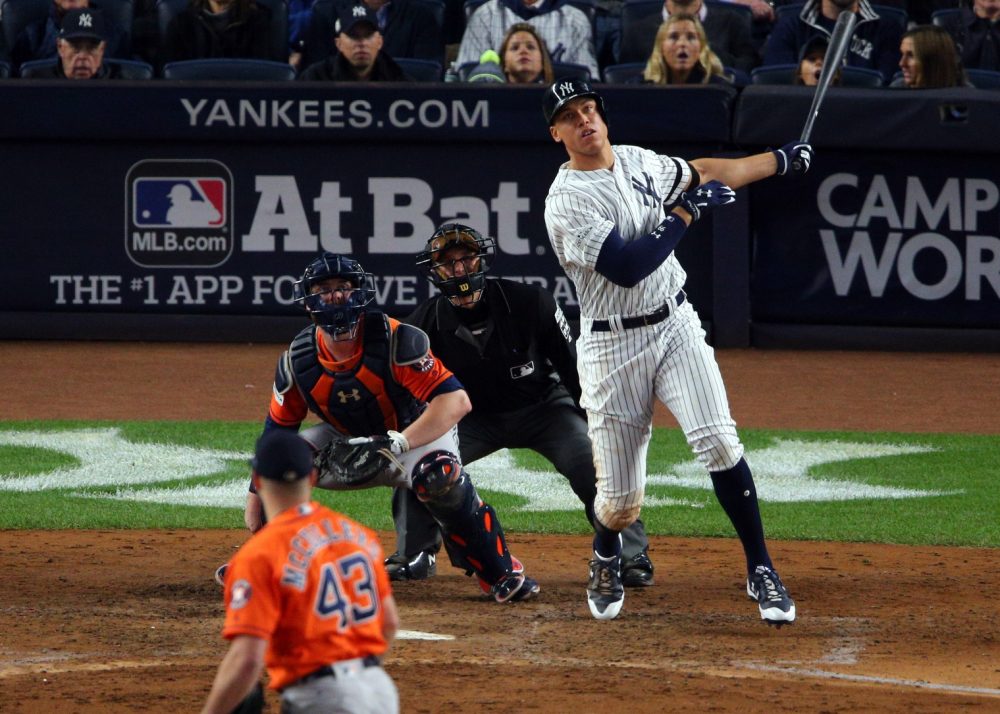 The idea of selecting a postseason hero has always felt a little strange to me. While there’s no doubt that the Aaron Judges and Jose Altuves and Yasiel Puigs deserve their accolades, our need for streamlined narratives often eclipses some of the more interesting, albeit minor moments of playoff baseball.

On Tuesday night, with Yankee Stadium positively thrumming with the hopes and nerves of 48,804 fans, Aaron Judge scraped the left field scoreboard with a one-out RBI double. It was the first of several exclamation points on the club’s eighth-inning rally, and in the wider scope of the ALCS, a two-game rally that saw the Yankees overturn their 0-2 deficit to even the standings. There’s no doubt that if we had to settle on an ALCS Game 4 hero, Judge’s head is the one we’d crown.

Should the Yankees advance to the World Series, should they once again grasp with confidence the sterling silver Commissioner’s Trophy, Judge’s performance will be one we point to over and over again. How he continued to refine and mature his approach, capitalizing on Lance McCullers’ hanging curveball for a seventh-inning home run and Ken Giles’ slider for a game-tying double, how he continued to fight against the narrative of regular-season-wunderkind-turned-postseason-letdown, how he finally, with both panache and grace, helped fend off the Hottest Team in Baseball when it mattered most.

Here, then, are three smaller, more inconsequential storylines from last night’s game. These weren’t necessarily the most important components of the Yankees’ win, nor even the moments that helped them edge past the Astros. These won’t be the moments we remember a year from now, or two years from now, or whenever we find ourselves dissecting the Yankees’ 2017 postseason run (or the Astros’ run, for that matter). But for now, in the fleeting hours when they’re both memorable and relevant, let’s give them their due.

It only matters that you reach base; outside of home run chases and hitting streaks, it rarely matters how you get there. Still, Josh Reddick found himself in peculiar company Tuesday night after reaching on catcher’s interference in the sixth inning.

The call came at a fortuitous time for the Astros. Sonny Gray ran a tight ship through the first five innings, but had started to look a little wobbly by the sixth. His first four pitches all danced around the strike zone, sending George Springer to first base for a leadoff walk. When he tired of pickoff attempts, his pitches to Reddick were no more successful, as he slowly worked his way into the strike zone, finally landing a strike with his ninth pitch of the inning.

His next strike should have been a 2-2 foul, but Reddick’s bat just nicked the webbing of Austin Romine’s mitt and home plate umpire Chris Guccione immediately called catcher’s interference on the swing. While reaching on catcher’s interference isn’t an overly familiar sight at the major-league level, it’s routine for Reddick this year. He led the league in the category during the regular season and joined Jacoby Ellsbury as one of just two players to ever incur multiple interference calls in the playoffs.

The play signaled the end of Gray’s outing. David Robertson took the mound and promptly walked Jose Altuve to load the bases. Carlos Correa hacked at a curveball in the dirt for the first out of the inning, but Yulieski Gurriel wasn’t so easily duped. He smoked a 107.6 mph line drive into the left field corner, clearing the bases and giving the Astros a 4-0 boost.

The thing about this Astros loss was that no one saw it coming. There was no writing on the wall, there was no telltale slip. The thing about this Astros loss was that A.J. Hinch was lucky to stretch McCullers past the fourth, and Giles was limited after racking up 37 pitches in Game 1, and the Astros were rapidly running out of viable alternatives against a Yankees lineup that had finally started to dig in at the plate. Even a four-run lead wasn’t enough to hold the Bronx Bombers back.

Chris Devenski was first out of the gate once McCullers departed in the seventh, moments after Judge lofted a 427-footer to dead center. The fatigue (feeding into a 3.9 BB/9 and 1.9 HR/9 rate) that plagued Devenski during the second half of the season came back to bite him. Didi Gregorius plucked a high fastball for a triple to center field, Gary Sanchez plated a run on a sac fly, and Greg Bird drew a six-pitch walk.

Joe Musgrove stanched the bleeding with two quick outs, but returned in the eighth to allow back-to-back hits and put runners in scoring position. Then it was Giles’ turn, but Brett Gardner plated a run on a ground out and Judge doubled in the winning run. Gregorius singled and Sanchez doubled in two runs, and it seemed like no matter what Giles threw or where he threw it, the Yankees were waiting.

Giles intentionally walked Bird, so Hinch took a chance on Luke Gregerson, who long ago this season had pitched himself out of high-leverage situations. Most of the damage had already been done, however, and while Gregerson had trouble locating his pitches to Starlin Castro and loaded the bases with yet another walk, he made quick work of Aaron Hicks and Todd Frazier to end the inning.

Judge gets caught stealing during a tag appeal.

Judge may have been the unofficial postseason hero of Game 4, but even he had his moments of uncertainty. In the fourth inning, he drew a walk from McCullers and made a break for second base when Sanchez lofted a pitch to shallow right field. Judge rounded second, but was forced to dash back to the first base bag on the catch and was quickly ruled out at first.

The Yankees appealed; Judge had beaten the tag at first base and should have been safe. But as Hinch later put it, watching the review on a video screen “as big as the state of New York” brought another issue to light: Judge had not re-touched second base on his scramble back to first, and therefore could not be ruled safe.

With the score still knotted at 0-0 and two outs in the fourth, the rookie slugger decided to get creative. The Astros tried to call for an appeal on the play, but inadvertently caused some consternation among the umpiring crew after they were discovered to have two balls in play—one wielded by McCullers and the other by the infielders. In the seconds it took the umps to remove the second ball and prepare for the second appeal, Judge bolted back toward second base, a last-ditch attempt to prevent the appeal by completing another play.

He almost beat the throw, too, but McCullers nabbed him at second, bringing a final end to the shenanigans.

“I was going to be out no matter what,” Judge admitted after the game. “If they make the play on me there at second base, then they can’t appeal the previous play … so that’s the only option I had.”

These weren’t the plays that made the game. They didn’t single-handedly turn the tide or dramatically tip the scales in the Yankees’ favor. Not one of them could be described as the nail in the coffin, the final swing of the blade slicing into the scaly blue and orange heart of the dragon.

They were just moments in a series of other moments—some flashier, some imperfectly executed, some truly triumphant—that helped reset the series for a second time. The ALCS won’t finish in New York City after all. Following Game 5 in New York, it’ll return to Houston on Friday, where Sanchez and Judge and Chad Green (but never, ever Chad Judge) will try to wrap up the pennant in enemy territory. Or not. The slate has been wiped clean again, and with Dallas Keuchel and Justin Verlander waiting to trounce the Yankees in Games 5 and 6, there’s really no telling how the rest of this series will unfold.