Yesterday, Statcast released the comprehensive leaderboards for its newest metric: Sprint Speed, measured in terms of “feet per second in a player's fastest one-second window.”

These were derived by measuring when runners were likely to be heading at top speed, taking multiple bases (other than from second on an extra-base hit). The full list is available here for your perusal: there are a few surprises, like the proximity of John Jaso to Jonathan Villar, or the sad state of Troy Tulowitzki. But for the most part, it’s an intuitive ordering of names, what you’d want when measuring baseball players.

The result is a slightly left-skewed distribution of speeds, with a group of first basemen, catchers and designated hitters weighing down the field. The average runner covers 27 feet in a second; Billy Hamilton can crack 30, while Albert Pujols brings up the rear at 23.3. In non-baseball terms, it’s the difference between 20.5 mph and 15.9 mph, or “much faster than you” and “much faster than you.”

As with any new field, questions remain. As an MLBAM product, the statistics themselves are unverifiable, though unless you’re using this article as an excuse to run off and pick up John Jaso in your fantasy league, the inevitable noise is unlikely to invalidate the exercise as a whole. And as Jeff Zimmerman brought up in a tweet, Sprint Speed does not consider acceleration: this won’t help you guess which players excelled most in picking up erasers off gym floors in the shuttle run. It’s a step forward, one more tool in a half-complete set. We don’t know how important that aspect of running is, or the ability to read the pitcher’s move. But they definitely aren’t nothing.

But we can’t blame Sprint Speed or its creators for failing to encapsulate the true value of baserunning through the measurement of sheer velocity. After all, we’ve been doing that forever. Here’s a scatterplot of each qualifying runner’s Sprint Speed, contrasted with their 2017 baserunning value (as measured by BP’s Baserunning Runs divided by baserunning opportunities): 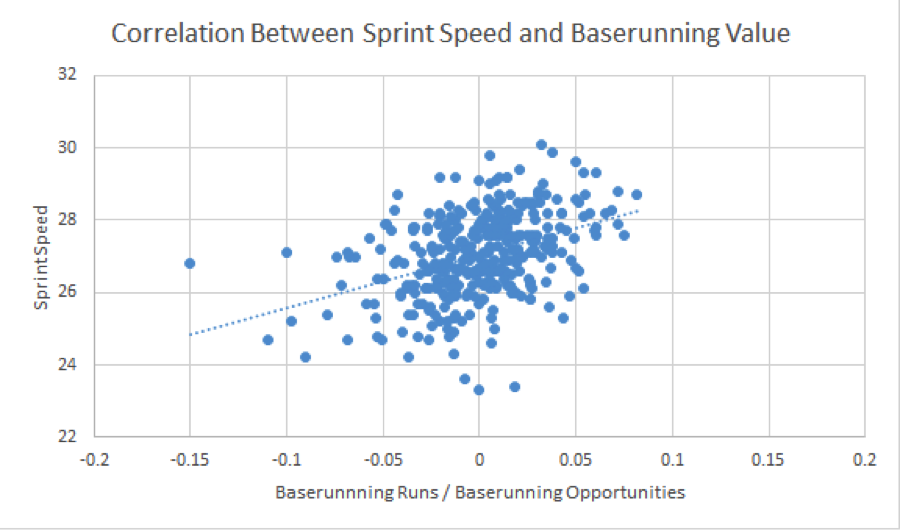 The correlation between a player’s baserunning value and what we would approximate as their “true talent” speed offers an R-squared of only 0.16. It’s likely that this number will increase as the season continues and the sample conquers some of its fiercer outliers. But even so, it’s likely that our new numbers simply provide another opportunity to attack an old myth: that speed is the dominant factor in baserunning skill.

It’s a difficult habit to break. Kids of my generation were raised on the turf-scorching Cardinals of the mid-80s, Coleman and McGee and the Wizard; more recently it was Billy Hamilton who was thought to break the game. And yet the game never does break. Hamilton is still an excellent baserunner, tied for ninth in BRR as a counting stat (although notably 47th when considering it as a rate stat). But even among base-stealers, speed isn’t the only skill. A histogram of Stolen Base Runs, averaged by Sprint Speed:

The slowest runners aren’t the ones hurting themselves with stolen bases; they’re too humble to try. A little speed, as it turns out, is the most dangerous thing to have. And while the numbers certainly go up as you move east of zero, that last number is brought down by Travis Shaw, who with a perfect 7-for-7 on stolen bases has the third-highest SBR (1.77) of the year, despite a running speed well below average.

But I’ve buried the lede, which is that parenthetical 1.77. Only league leader Cameron Maybin, at 3.02, is on pace to earn even half a win of value through stolen bases. Not only is the stolen base just part of a runner’s productivity, it’s nowhere near as important as some of the others, particularly going first-to-third and second-to-home on singles, and moving over (or avoiding double plays) on ground balls.

The stolen base has always received its position of prominence because it is so clean: sure, there’s the pitcher’s move and the catcher’s arm, but the other variables are swept away. We can count stolen bases in a way we can never count the “hustle” plays, or even determine which of them are actually due to hustle or just plain speed. From the scatterplot above, and with the understanding that acceleration still lies beyond our grasp, we can perhaps theorize that other factors—awareness, deception, even replay-enhanced tag-avoidance skills—remain vastly underrated in the baserunning realm.

The temptation with Statcast’s new leaderboard is to gravitate toward the top of the list, watch highlight videos of scrawny legs pistoning in unison, and perhaps turn to the bottom and scoff at the old men for growing old. But perhaps the greatest value of this statistic, the attempt to distill running “talent” from running production, is to celebrate this guy: 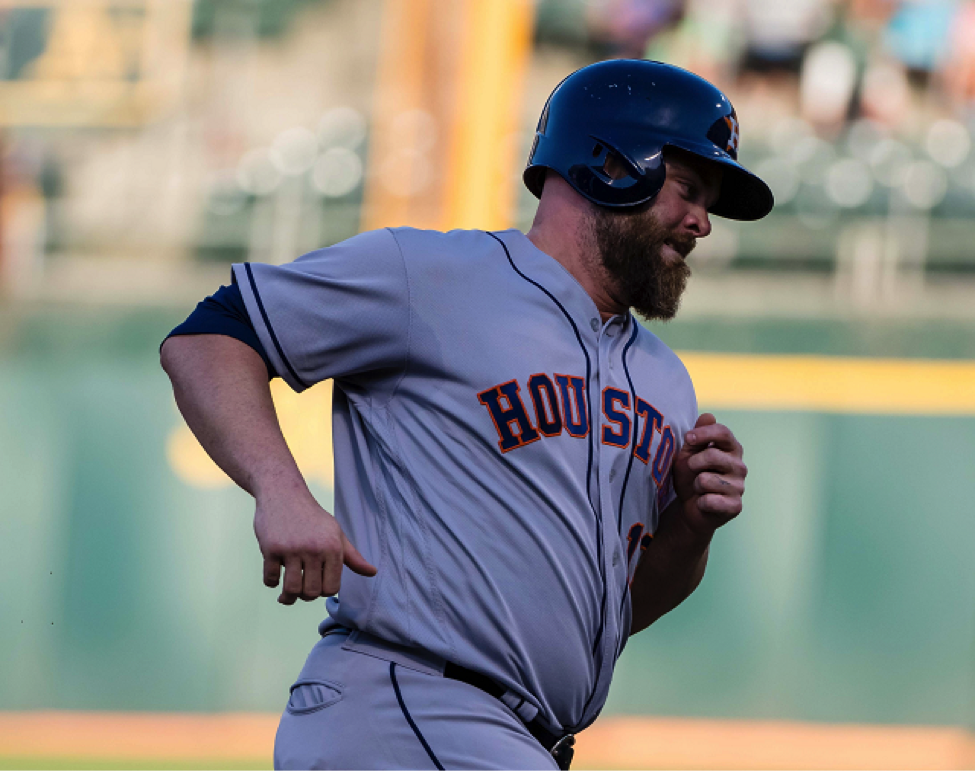 This will almost certainly be the only article you read in your life in praise of Brian McCann’s baserunning. He has 25 stolen bases in his career, and two in his last five seasons. He hasn’t had a positive BRR total since his rookie year. He’s the second-slowest player in Major League Baseball in 2017, a tenth of a tick above Albert Pujols. And not only has he not been a detriment on the basepaths in this, his age-33 season, but he’s actually been somewhat of a positive.

It’s not that one stolen base (in two tries, good for a -0.01 SBR). It’s because, at least for the past three months, he’s been judicious about trying for the extra base. Between advancing on ground-ball outs (0.76 runs) and moving ahead on sacrifice flies (0.25 runs), he’s been as productive on the basepaths as Jarrod Dyson. The nature of baserunning makes his status shaky, of course: thanks to the weighting of bases and outs, a homestand’s worth of extra bases can be undone by a single mental miscue. But for now, McCann is hauling around his aging body at the maximum value he can, 23.4 feet per second at a time.

You need to be logged in to comment. Login or Subscribe
bhacking
Where did The Freeze end up on the ranking?
Reply to bhacking
lichtman
" And not only has he not been a detriment on the basepaths in this, his age-33 season, but heâ€™s actually been somewhat of a positive.

Itâ€™s not that one stolen base (in two tries, good for a -0.01 SBR). Itâ€™s because, at least for the past three months, heâ€™s been judicious about trying for the extra base. Between advancing on ground-ball outs (0.76 runs) and moving ahead on sacrifice flies (0.25 runs), heâ€™s been as productive on the basepaths as Jarrod Dyson."

I realize that you are going to use BP's base running metrics, and I don't usually tout my own metrics (a metric is a metric and there are many good ones), but UBR on Fangraps is really comprehensive and accurate. Of course in small samples it is subject to sample and measurement error like almost all metrics.

Dyson is having another amazing year on the bases. He is at 5.9 runs in 72 games and he averages around 10 runs per 150 games in his career which is breathtaking.

I don't know why you would compare the two players, either in talent or in 2017 performance. They could not be further apart. If you point is that slow speed does not necessarily (nothing NECESSARILY means anything, right?) mean poor base running and vica versa, you used poor examples. McCann is really slow and has been one of the worst base runners in baseball and is having another bad, although not abysmal season so far in base running runs. Dyson is one of he fastest runners, he has been probably the most valuable on the bases during his career and is having a typically spectacular 2017 so far.

The reason speed correlates fairly low (I dislike r^2 and prefer r when estimating a relationship) to base running at the seasonal level is simply because of sample size.

Basically it is quite unusual for a slow player to have much base running value and a fast runner has to have awful base running skills (which is rare as well) in order for him to have poor base running value.
Reply to lichtman
euqubudhp
I have no doubt that UBR is a wonderful statistic. But for my purposes, it was in this case unusable: at least in its public form on FanGraphs, it doesn't break down into components, a critical element for the thesis of this essay.

I'm no more interested in debating the merits of various metrics and their weights than you are, but by the one I've chosen, McCann and Dyson are comparable in exactly one way: they've each earned 0.9 BRR this season. This is not to insinuate that McCann is at all as good a runner as Dyson has (and if it came across that way, I deserve all scorn), but that,based on the sample, the opportunity, and the execution, they've provided the same value (to us) so far.

Nothing necessarily means anything, you're right. But the thesis of the essay is that there are assumptions still out there about the importance of speed and the relative importance of stolen bases in a player's baserunning values. That's the certainty this piece is attempting to refute, and the correlation with Statcast's new metric is simply an opportunity to reconsider those assumptions.
Reply to euqubudhp