One of the reasons we’re excited about the pitching metrics we’re introducing this week is that they allow us to answer new questions. Who had the best control among ERA qualifiers in 2016, measured by Called Strike Probability (CS Prob)? Bartolo Colon, for whom 52.1 percent of his pitches were called strikes, followed by Jimmy Nelson and Hisashi Iwakuma. Who had the best command, measured by Called Strikes Above Average (CSAA)? That’d be Zach Davies, who got 3.5 percent more called strikes than average, followed by Josh Tomlin and Kyle Hendricks.

But it’s not just that CS Prob and CSAA give us answers to new questions. They allow us to ask new questions, too. This month, I’ve been looking at pitchers who changed something about their approach in 2016, as if they had made a New Year’s resolution. In this article, I examined pitchers who induced more or fewer grounders. Last week, I considered pitchers whose plate discipline (measured by inducing swings outside of the strike zone and avoiding them in the zone) improved or declined.

Now I can ask a new question: Which pitchers had the greatest change in control from 2015 to 2016? (And you can probably guess what question I’m going to ask later this week.)

Now, the premise of these New Year's resolutions articles has been a little silly. I don’t think pitchers, or hitters for that matter, necessarily make New Year’s resolutions the way I’m proposing here. I doubt that last January 1, Chris Davis said, “I resolve to hit more to the opposite field in 2016” or that Cody Allen said, “I resolve to get more grounders this year.”

They wound up leading the majors in those respective measures, but I assume it was part of an overall strategic shift, involving more than just the outcome. Davis probably tinkered with his swing, Allen maybe worked with his coaches and catchers to change his sequencing. (His repertoire didn’t change.) If there was a resolution involved with either player, it probably went beyond the outcome that I’ve measured.

But control and command? Those are pretty tangible ends in themselves, with obvious benefits. No, I don’t think pitchers made resolutions involving them per se, but it’s reasonable to think pitchers go into each season looking to improve.

So let’s look at the numbers. Which pitchers improved their control the most from 2015 to 2016? To keep this consistent with the other articles in this series, I’m going to look only at the 175 pitchers who threw 60 or more innings in both years. (That eliminates our 2016 command leader, Zach Davies, who had only 34 big-league innings in 2015). Here are the pitchers whose called strike probability (CS Prob), our control proxy, increased the most from 2015 to 2016: 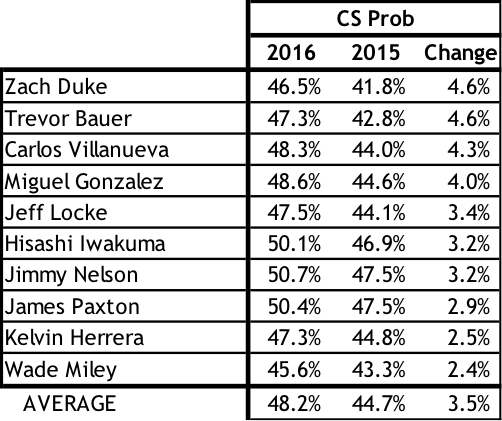 I don’t know about you, but there’s nobody on that list that I’d think of as having made leaps and bounds with his control. Well, Trevor Bauer, and maybe James Paxton. I’m not sure about anybody else. 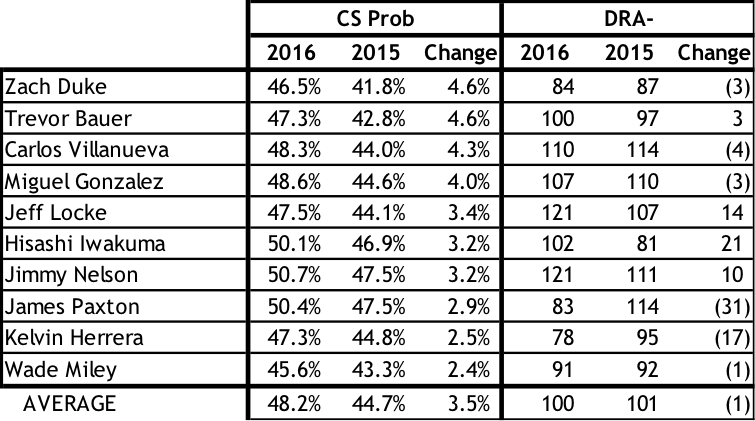 Well, I suppose they improved, but just barely. Collectively, this group was league average in 2015 and stayed that way. These pitchers beat their PECOTA projections, on average, by a decent amount, so they did outperform expectations.

How about pitchers whose control, again measured by called strike probability, declined? 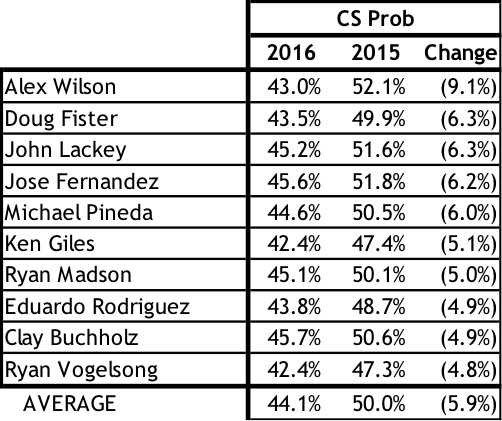 There’ll come a time, I suppose, when seeing Jose Fernandez’s name won’t make me sad. We’re not there yet. Anyway, once again, this isn’t quite what I was expecting. Doug Fister had a rough year, and I’m definitely not surprised to see Clay Buchholz, who has pitched poorly in every even-numbered year this decade. But there are some surprises there.

And here’s how they performed: 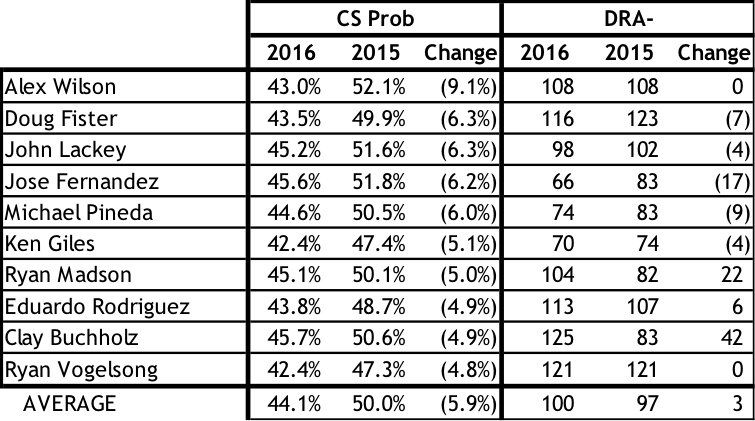 A little backsliding, not a lot. Again, this is a largely league-average group that remained about league average. They also missed their PECOTA projections for DRA by a little.

Maybe control isn’t a big definer of pitching success. Maybe it’s descriptive, like percentage of times a pitcher throws his fastball, rather than evaluative, like the proficiency of that fastball. Let’s look at all 175 pitchers who pitched at least 60 innings in both 2015 and 2016. I’ve divided them into identically-sized deciles and calculated the weighted average change in control (i.e., called strike probability) and DRA- for each decile. Here’s how it looks: 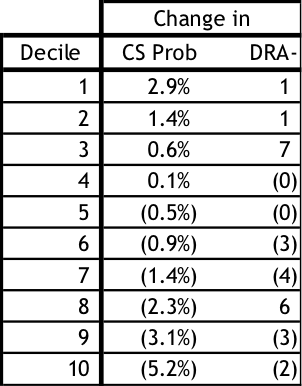 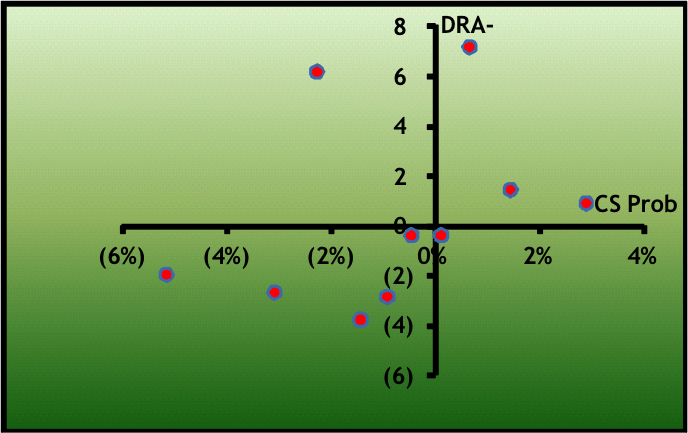 That really isn’t much of a relationship. For one thing, the magnitude of the change to DRA- is pretty negligible for all but a couple deciles. More importantly, the slope’s the wrong way—it’s positive, so better control yields a (slightly) higher DRA. That’s counterintuitive. But the relationship is so weak (r-squared of 0.10) that it’s probably more accurate to just say that it doesn’t exist. A change in control, as measured by called strike probability, doesn’t seem to move the performance needle. It’s not an effective New Year’s resolution.

This report would not have been possible without research assistance from Rob McQuown of the BP stats team. He answered many, many queries and data requests from me with aplomb. In fact, he probably utilized many plombs, not just one. I really did ask for a lot.

You need to be logged in to comment. Login or Subscribe
TGT969
Rob-interesting article. Just wanted to add the Pirates could not get rid of Jeff Locke fast enough! Outside of a few early good starts he was replaced by many more promising arms. Good luck Marlins.
Reply to TGT969
mainsr
I'm fairly agnostic as a fan, but if there's a team I follow more than any other, it's the Bucs. The fact that Locke led the team in IP tells you everything you have to know about the pitching staff last year. I never got into the Locke hate; I'm sure he was trying his best, and he has great hair. That phiten necklace, though...

The most Jeff Locke moment of the season was on May 30. He pitched a 3-hit shutout against the Marlins, walking nobody. But the game coincided with the first game of the Stanley Cup (Pens won, 3-2), so pretty much nobody in Pittsburgh saw it.