Researching Tommy John surgery and its aftereffects is not an easy task. There are so many variables: the severity of the ligament tear, the health of the arm beforehand and the age of the pitcher it hangs off of, the skill of the doctor performing the procedure, the mutant healing factor of the elbow in question, the organizational philosophy toward rehab, the pitcher’s ability to pitch through pain or inability to disclose it, the small (yet burgeoning) sample size of those who’ve survived it. And luck.

There has always been a mystique surrounding the injury. Perhaps it’s the suddenness of it, a sort of anatomical act of terrorism with no warning, no justice. Or perhaps it’s the surgery itself, the sheer impossibility of it, as though it were thought up by Roald Dahl. (Find a spare tendon and tie it in place where the old one was. Why does the body even have spare tendons?) Or perhaps it’s just the unpredictability of what happens next. Pitchers generally struggle their first season returning, but occasionally a starter will simply take up dominance where he left off.

There was a phase when, having seen so many pitchers re-emerge with newfound velocity, people began whispering about pre-emptive Tommy John surgery, like a baseball equivalent of Botox. It seemed so easy, as if all the cares and stress of a pitcher were stored in this little tendon that could be swapped out like a cartridge on a handgun. And then the problems started as the infirmary list grew. Some pitchers stopped responding to treatment, suffering setbacks, undergoing second surgeries, never being quite the same. Even today Tommy John surgery is capricious, like a hurricane. The Mets gave Matt Harvey an extra three months as a precaution as he came back, and the plan worked; they did the same with Zack Wheeler, and he instead lost a second full season.

Amidst all this chaos stands one truth, one unassailable maxim: "control is the last thing to come back." Now, thanks to our new tools at BP, we can dig more carefully into this idea. How long does it take for that touch to restore itself, and how badly does it waver? Does it even waver at all?

Using the database created by Jon Roegele, 267 pitchers—from Dylan Bundy to Jamie Moyer—have gone under the knife and returned to the mound in the modern era. Sam Miller’s magical year of 1988 happens to mark the earliest reaches of Called Strikes Above Average (CSAA) data. For each pitcher I amassed their BB% per batter faced, in order to get an average of the group as a whole, for the year before their injury, the year in which the injury took place, the first (often incomplete) year returning from surgery, and the next two years after that.

However, walk rates aren’t stable over a pitcher’s career; starters generally hone their control over time, slowly lowering their walk rate as they mature, up to a certain point. Then, as their physical abilities wane, they’re forced to nibble more and take their chances at the edge of the zone, which causes their walk rate to increase again.

Here, then, is a comparison of both the actual and expected walk rates, per batter, for the composite group of hurlers. 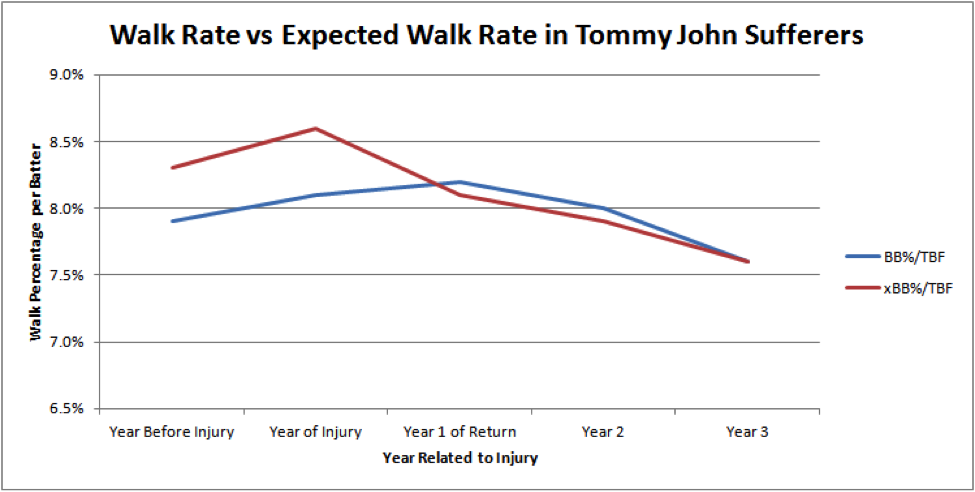 The effect of surgery is surprisingly minimal, and in fact pitchers who get injured are actually exceeding their expected level of control beforehand. The answer appears, at first glance, to be a matter of sequencing: for both years -1 and 0, the average of pitcher performance was much higher (8.5 percent and 10.6 percent, respectively) than on a per-batter basis. In other words, if we averaged pitchers, rather than their collective work, our pitchers actually walk more batters before their surgery than after it.

But averaging doesn’t tell us everything: as we’ve already concluded from the variety of recovery rates, the variation in a pitcher’s performance pre- and post-injury is equally important. Here are the standard deviations for each year of pitchers:

It’s actually the year a pitcher gets hurt, not the year he returns, where we see a wide disparity in performance. This is because we see some bright, short flameouts: Brian Falkenborg in 2006, for example, who faced 12 batters and walked two of them, Mark Wohlers walking six of the 10 he faced before hitting the disabled list.

A large portion of this is due to the way the data has been collected; both year 0 and year 1 include the same number of small-sample seasons, but in the former those seasons are cut short due to the injury, and in the latter they’re abbreviated because the pitcher often returned in September. Still, there’s also likely some examples of pitchers trying to “work their way” through discomfort, or displaying a weakening set of mechanics that may have caused the injury in the first place. It’s very difficult to say how much of each is cause and effect.

The next question, then: how visible is the effect within the year of return itself? The simplest way to investigate this is to look at the performance for pitchers based on the month of their return. Thankfully, despite the rather underwhelming sample, teams have done us a relative favor by spreading out the return date fairly evenly.

Again, there doesn’t seem to be a predictable pattern here. If pitchers were really recovering their feel, we would expect a spike in walk rate for pitchers returning in September, and yet not only do they have nearly the lowest rate of any month, they matched evenly with expectations. This also has its sampling bias, of course; it should be noted that teams are less likely to bring back a replacement-level player in September, when rosters have expanded and many teams are out of contention. It would be nice to have a larger sample to work with; unfortunately, with each passing season, there will be.

The problem with this study is that it doesn’t make sense. Command really should be the last thing that comes back after Tommy John surgery. We hear it anecdotally in the NFL wide receiver, a year removed from ACL surgery, who struggles to make hard cuts in his routes. And it’s equally easy to conceive in the starting pitcher, whose arm has disintegrated with no notice, overcoming the psychological hurdle of trusting this foreign tendon to throw at maximum effort.

The arduous and cumulative process of rehab is meant to bridge this gap between not-pitching and pitching. But as Kyle Boddy at Driveline notes, mental issues aren’t always the driving force behind command issues, but instead are a symptom of rebuilding proprioception, or the coordination of the various moving parts of the arm. Mechanics aren’t just about thinking correctly while going through the pitching motion. Even after pain and discomfort have subsided, the stage at which a pitcher is ordinarily considered to be ready to pitch, there can still be lingering recovery issues that do not cause pain, but do affect proprioception.

For athletes who have microtears in their ligaments or otherwise damaged tissues that they cannot feel – ligaments have poor blood supply and innervation – this can have a serious negative impact on their ability to throw strikes.

Pitchers do struggle returning from Tommy John surgery and they do give up more runs. But it’s difficult to quantify the source of this effect, given our sample. Brandon McCarthy, in an interview after his successful first start back from rehab, noted that he felt as if he hadn’t missed a beat. Over his eight starts the ordinarily pinpoint righty went on to walk 24 batters in 35 innings, and struggled to go deep into games. Given the state of the Dodgers’ rotation last year, it’s easy to think that McCarthy was pressed into service and that he’d be given more rehabilitation to work out his issues in better times. But the root of his command problems are hidden deep within that elbow, lost among a dozen other factors; it’s impossible to say for sure.

Finally, we can turn from control to command. CSAA, the brainchild of Jeff Long, Jonathan Judge and Harry Pavlidis, attempts to distinguish how precise pitchers are able to be in hitting their spots by judging how well they’re able to paint the corners. If pitchers really are struggling to recapture their feel, it could be reflected not in walk rates but in pitchers finding too much of the plate, making themselves more hittable and driving up their ERA.

CSAA undergoes a similar aging curve to walk rate. Pitchers in their 20s slowly improve their command over time, as they harness their stuff; those in their 30s lose it faster than can compensate. The effect in our case is surprisingly negligible; there might be more of an effect if UCL tears were less democratic, but the average age of the injured is just a shade below 30, and so the effect distributes itself fairly evenly.

This is more what we’d expect to see: UCL repairees saw a worse called strike average after returning from injury than they did before, with their command only returning after the second year back. It would appear those pitchers who refused to walk batters compensated for their lack of mechanics by putting their pitches closer to the center of the plate, hoping to get by on their raw stuff rather than precision.

To put the decline in perspective: The increase in walk rate from 7.9 percent to 8.2 percent after injury is the difference between 29th among qualified starters (Drew Smyly, 6.37 percent) to 37th (Collin McHugh, 6.66 percent). Meanwhile, a drop in CSAA from -0.03 percent in a healthy year to -0.38 percent in the recovery year is the distance between 24th (Smyly, 0.61 percent) to 34th (Ian Kennedy, 0.22 percent). It’s not a career-halting decrease in sharpness, but it’s certainly enough to make life substantially more difficult.

As noted in the beginning of the study, there are a lot of factors at play here, and more work to be done. For now, though, it appears that the old adage that “control is the last thing to come back” is to some degree a myth, or at the very least an imprecision of language. It’s command, as defined by BP’s new metrics, that is last thing pitchers rediscover, or at least pitchers sacrifice that command for the sake of control.

For Greg Holland and Rockies fans, this may not be the best of news; for McCarthy and his followers, it’s at least a source of optimism. The human arm is a delicate thing, and age does swallow our every hope. But in the short term, for those ligament-impaired, things do get better. At least until the next thing goes wrong.

Thank you to Rob McQuown, Harry Pavlidis, Jonathan Judge, and Kyle Boddy for their help with this article.