With the year winding to a close, Baseball Prospectus is revisiting some of our favorite articles of the year. This was originally published on October 27, 2016.

I like people watching, and I suspect I’m not alone. People watching is the only reason anyone likes going to IKEA, and the reason you want to leave IKEA as quickly as possible. It turns out folks can be terrible in small but significant ways when parenting while picking out furniture. People, when they don’t know they are being observed, do all sorts of funny, kind, and awful things. Often they just do human things, like take soda refills they didn’t pay for, or pick up things for a stranger who has dropped them without being asked, or suddenly smirk when they’ve remembered something funny but private. Other people are just like us.

People watching is one of the best parts of being in a ballpark; being a fan makes us all a bit odd, and oddity lends itself to funny, kind, and awful things. Watching baseball players play a baseball game isn’t quite the same as normal people watching. Unlike those in the stands, we’re limited in our view of the humans on the field. Even the best seat can’t bring the expressions of every fielder into sharp relief.

Broadcasts lend themselves much better to people watching; the camera becomes our accomplice as we see managers make faces. We see players make faces when they commit an error. We see them make postseason faces. We watch spectators watching baseball to see if they make faces, or are even paying attention. We see people people watching other people. Most of the time it’s a lingering glance, but sometimes it’s watching something new or thrilling. 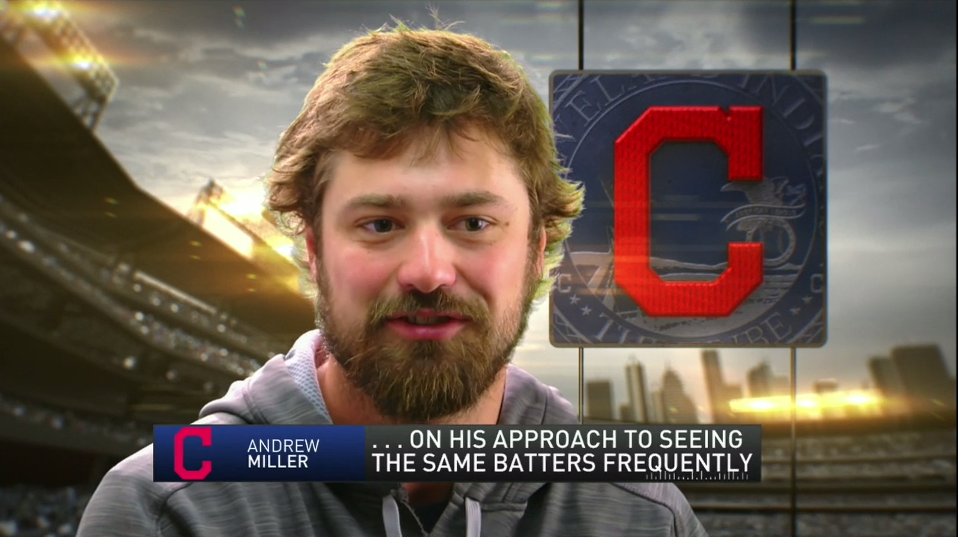 …but nah, it’s not. He’s striking out Russell Martin. While making that face. Really![1] The man is a miracle. We’ve watched him through an LDS, an LCS and Game 1 of the World Series, and done so with great attention. But now, let’s do a little people watching. Let’s watch people watching Andrew Miller.

You’re perfectly confident. This is why you acquired Andrew Miller. Sure, he hasn’t come in this early before, and yeah, he gave up a leadoff double, and he’s in a full count, and you thought it would be easier, but you’re perfectly confident. This is your most confident spit-out-seeds-and-gum-juice-and-chew-spit spit. (Andrew Miller walks Mookie Betts) FEELING VERY CONFIDENT. (Andrew Miller strikes out David Ortiz swinging) NEVER A DOUBT.

People adapt very slowly, but once they do, they bore easily. Look at Andrew Miller. Here he is in a 3-2 count, and he’s bored mid at-bat. Sigh. He has a two run lead. What is the point of prolonging this encounter? Oh. 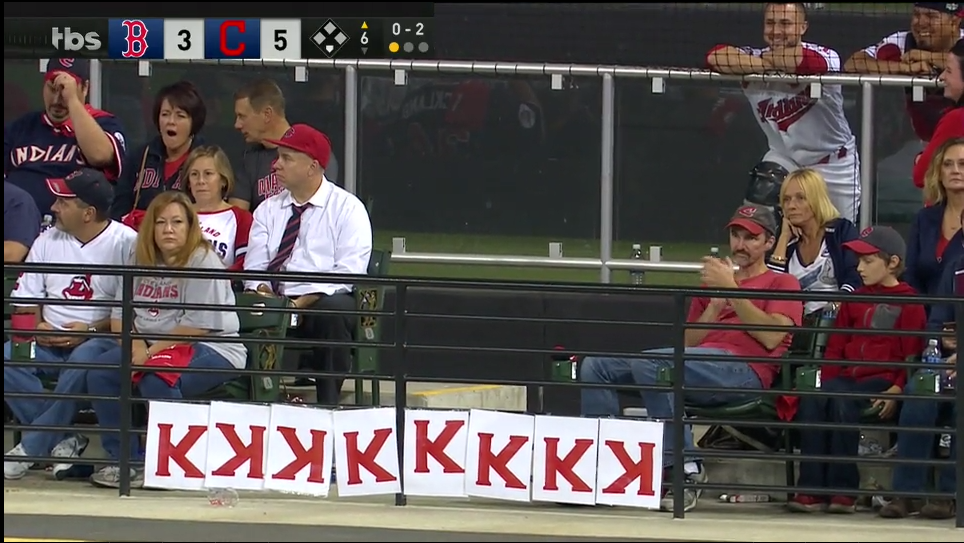 With just one out, attention is already dwindling. Look at Yawning Lady. Or Just One Clap Guy. Or the one, two, three, four Middle Distance Gazers. Hat Adjuster Dude has to adjust that hat right now. The only engaged fans of the Indians appear to be the guys employed by the Indians, tickled that Miller is actually doing this thing. I don’t know what the guy in the tie cares about. He’s wearing a tie to a ballpark.

By the second out, they’re so relaxed only some of them are standing, and we get Confident Dancer Lady. That is the dance of a confident lady. I got my fireman reliever and a charming shortstop, whaddya got? Not that, or this dance. 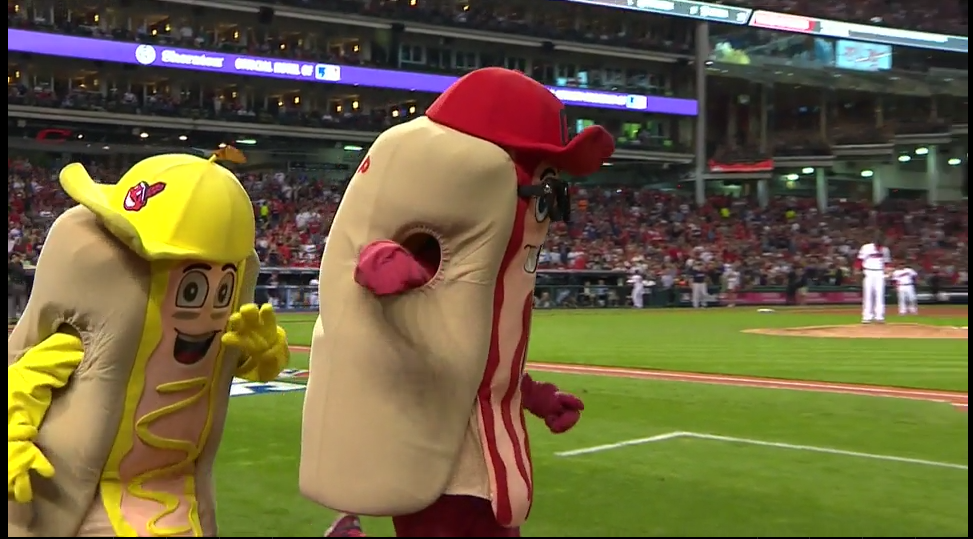 By the 7th inning, the fans have taken to hot dog cosplay to entertain themselves. We bore easily. 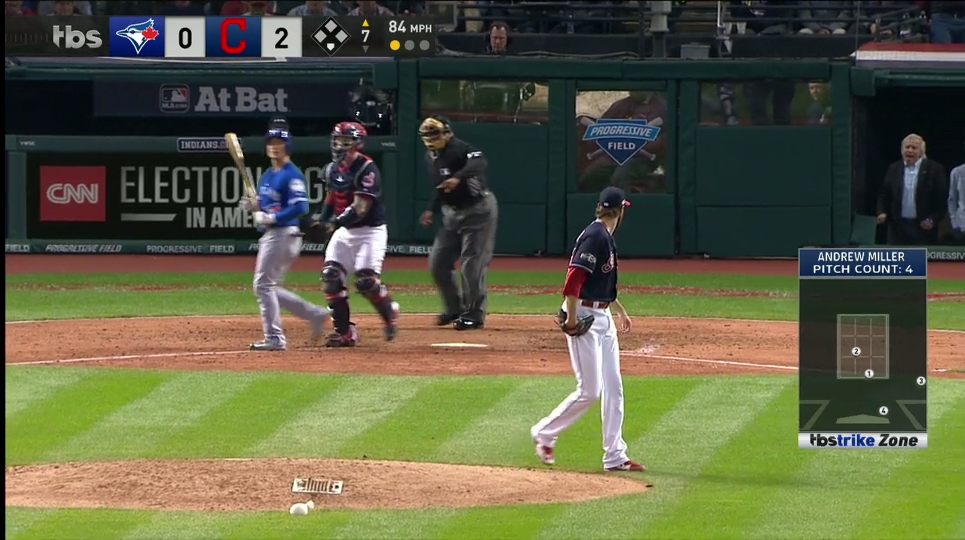 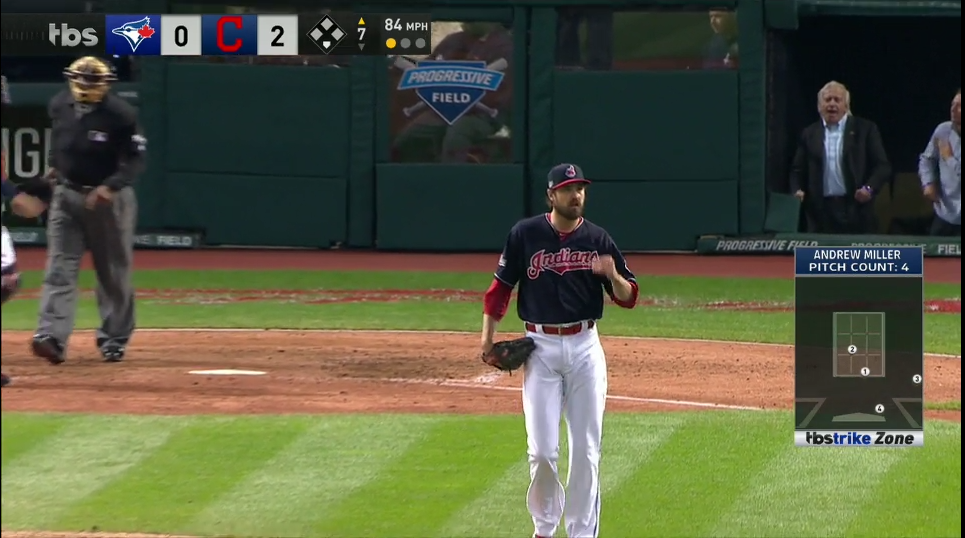 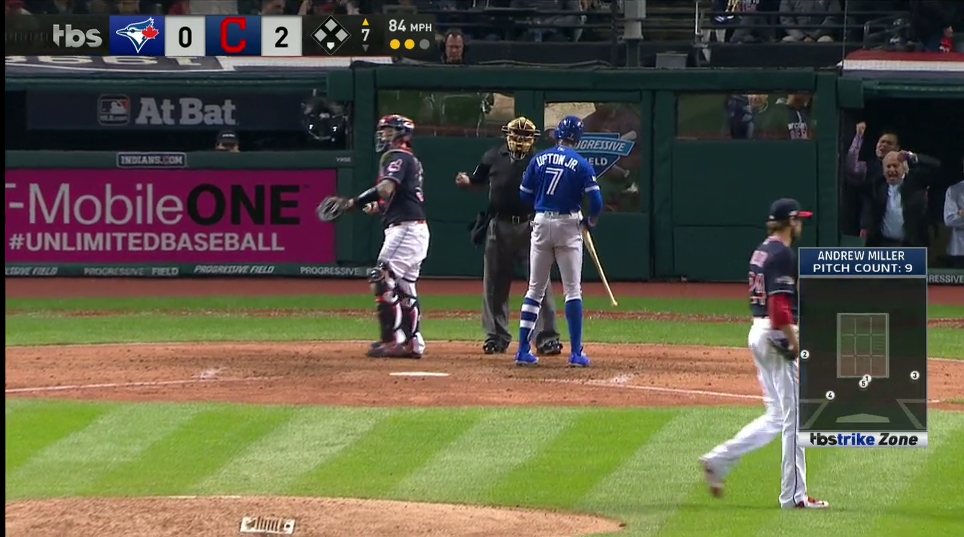 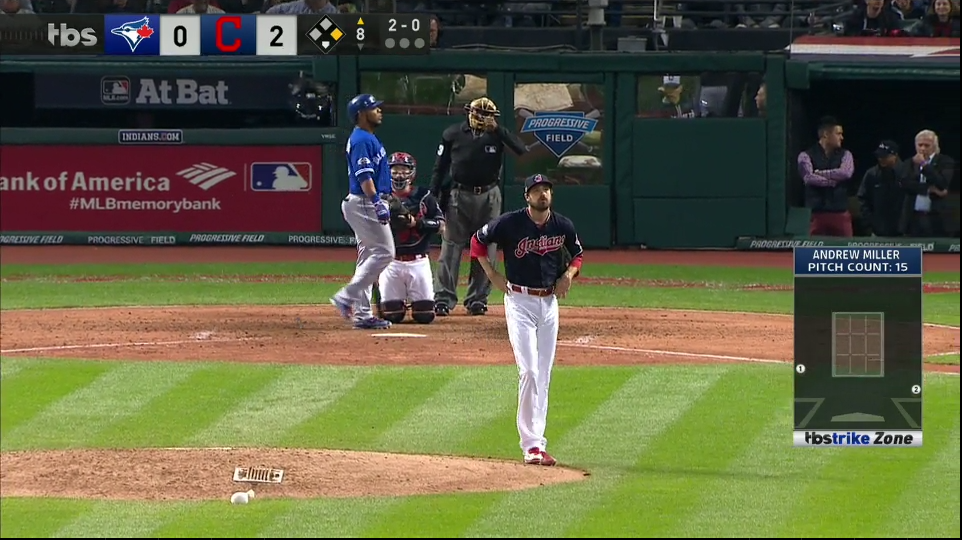 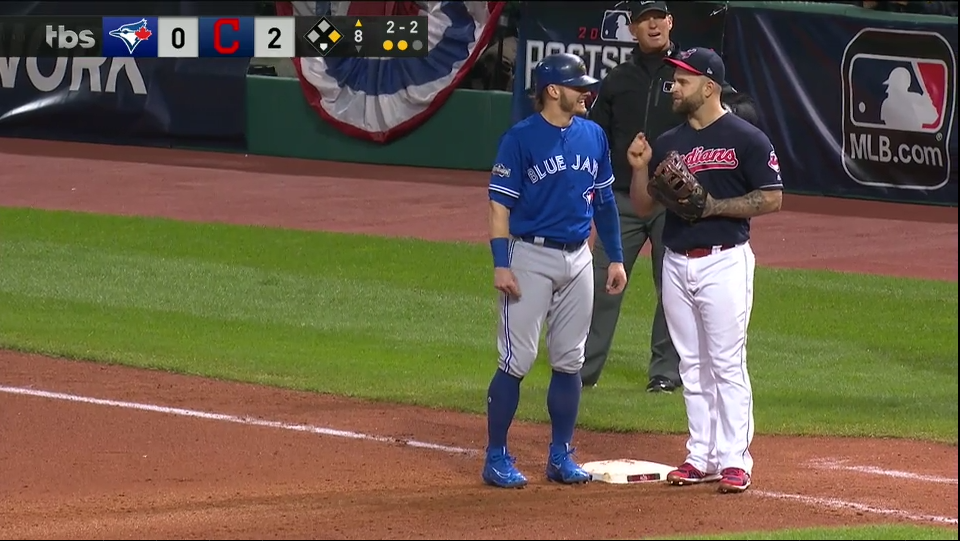 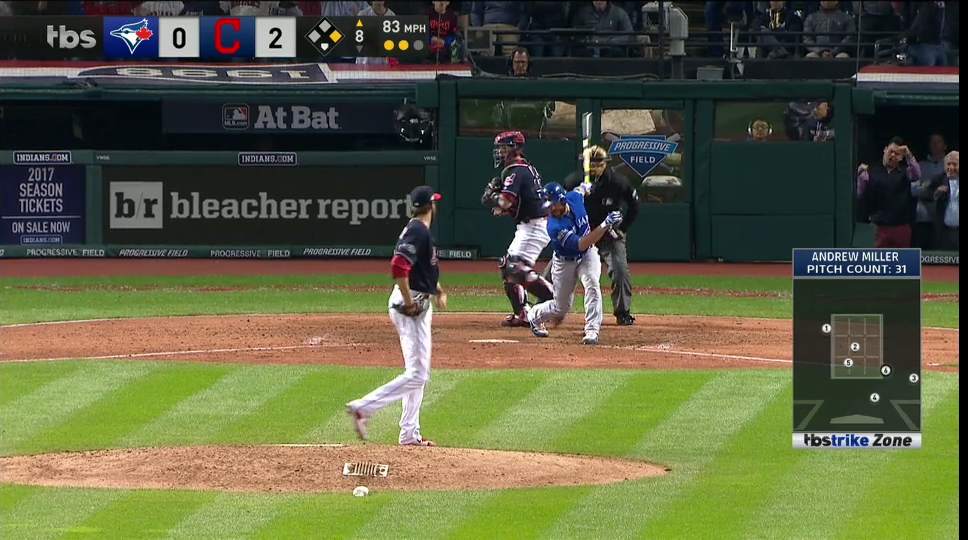 Hollywood makes too many sequels. 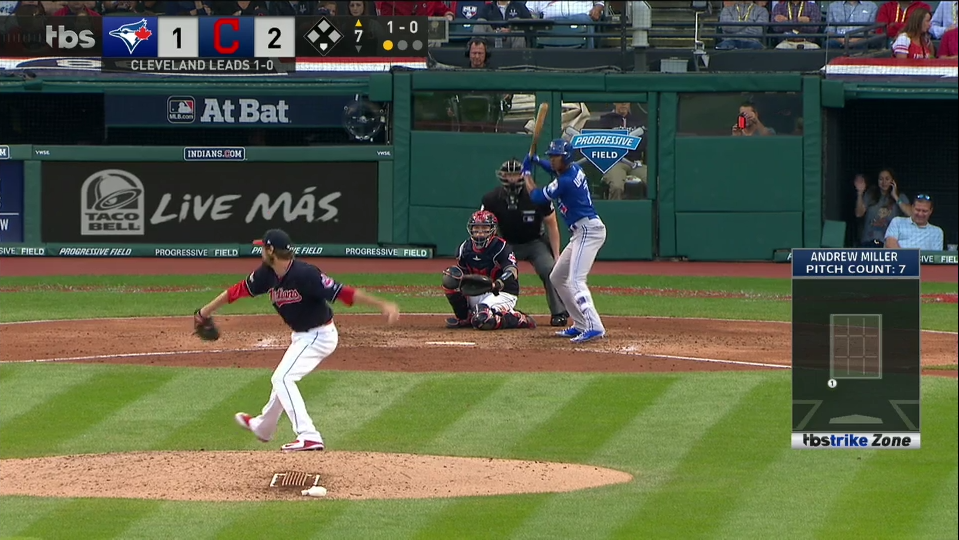 Being a fan is weird, and makes you do weird stuff, so I’m not here to judge waving to the broadcast camera. You’re on TV! Say hi to your family. They’re probably jealous you’re there and they aren’t, but it sure is nice that you’re thinking of them! 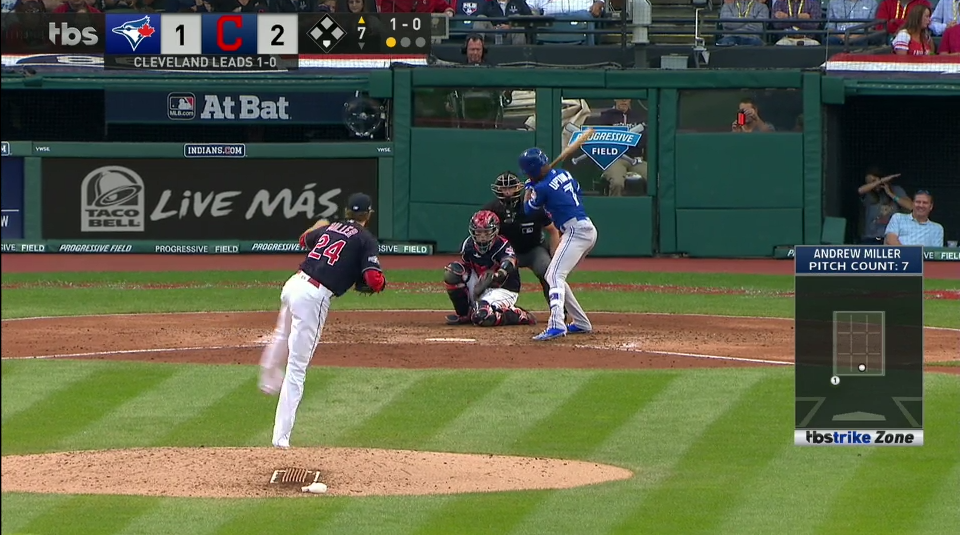 Oh, but don’t do that, though. Did you lose a bet? 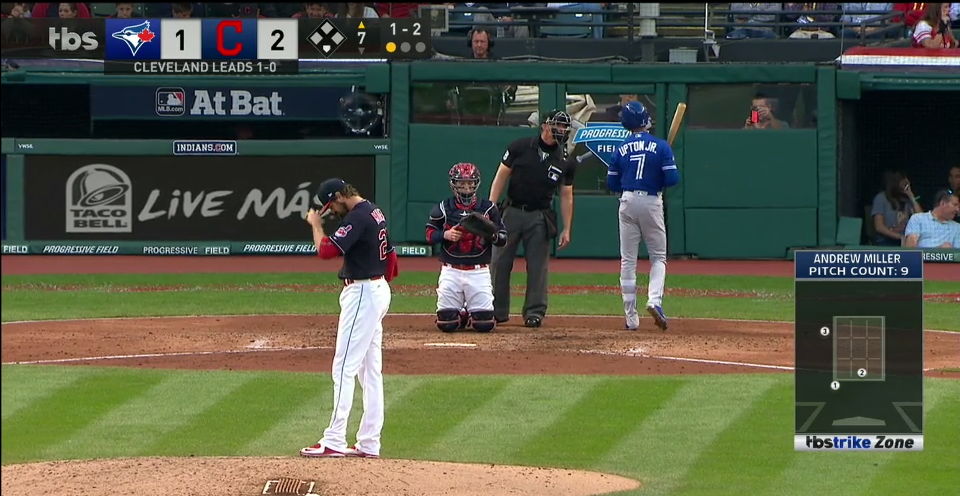 You and Melvin should probably both be a little embarrassed, honestly. You more than him.

A lot of people are disappointed here. Russell Martin is definitely disappointed. He just finished an 0-for-4 night. There are a few pointers. Some sighers. A couple folks who have seen a lot of baseball before and know this feeling remain very still. But our focus is on the White-Haired Woman in the Front Row. She could be your grandmother. We see her halfway through Martin’s walk back to the dugout, employing the customary dismissal of the elderly: the exasperated arm wave. He doesn’t see her, but we do. A lot of people watched Andrew Miller pitch that day and felt disappointed. But White-Haired Woman in Front asserted the privilege of her age and gestured at a professional athlete and fellow countryman she otherwise probably likes to express her disappointment. Andrew Miller: Progenitor of rude grandmas 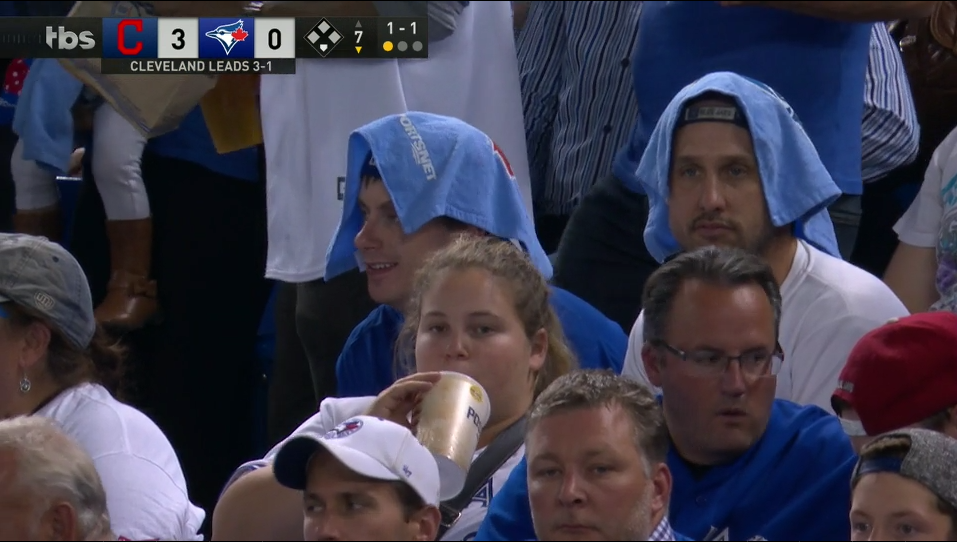 We’re watching someone watch their season slip away. It’s the bottom of the 7th and hey man, they’re only down three runs, and… oh good grief, this guy gets to pitch again? FRESH? RESTED? Is that legal? You search your memory. Social studies. You frantically grasp for some forgotten bylaw, some obscure convention that might prevent depravity. You smile for a moment. Think. Think. Think. You keep smiling as you place your rally towel on your head. Huh. 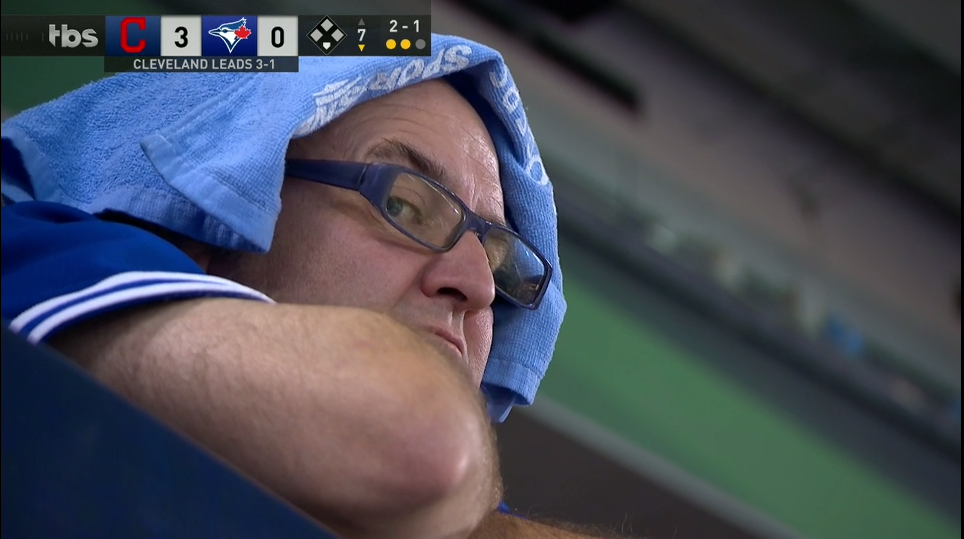 It is transfigured now. It is for hiding. It’s for sideways glances and beginning to forget. You didn’t do anything worse than believe. This isn’t your fault. But you feel a little hoodwinked. 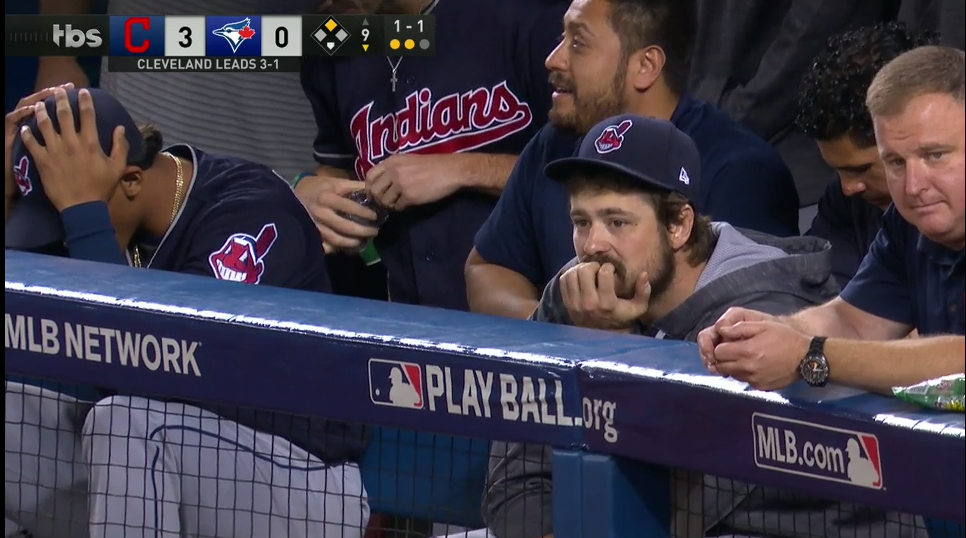 We all occasionally have to watch helpless. I imagine the feeling of being a world class athlete is amazing. I bet if you or I woke up tomorrow and found ourselves inhabiting the body of a professional baseball player, and could overcome the disorientation of being suddenly much taller and stronger that we are now to make our bodies to do what Andrew Miller does, we’d feel invincible. Ask me to reach the tallest shelves. What do I care? Except on this day, Andrew Miller faced what is perhaps the worst part of being Andrew Miller: he can’t watch himself pitch.

Often that’s fine. There’s a starter on the mound, and he isn’t needed yet. He doesn’t want to watch himself. Or he’s pitching and he’s feeling invincible. And later, he’s watching Bryan Shaw or Cody Allen, and they’re really good, too. When he is watching baseball, normally not watching himself is fine. But this day, I bet he wished he could watch himself. I bet he wished he could send out Mandrew Iller, and feel what we all felt when Andrew Miller came in. But he couldn’t. He had to watch helpless. Oh, the other thing I should mention about watching helplessly: sometimes you get to go to the World Series anyway. Stuff works out. 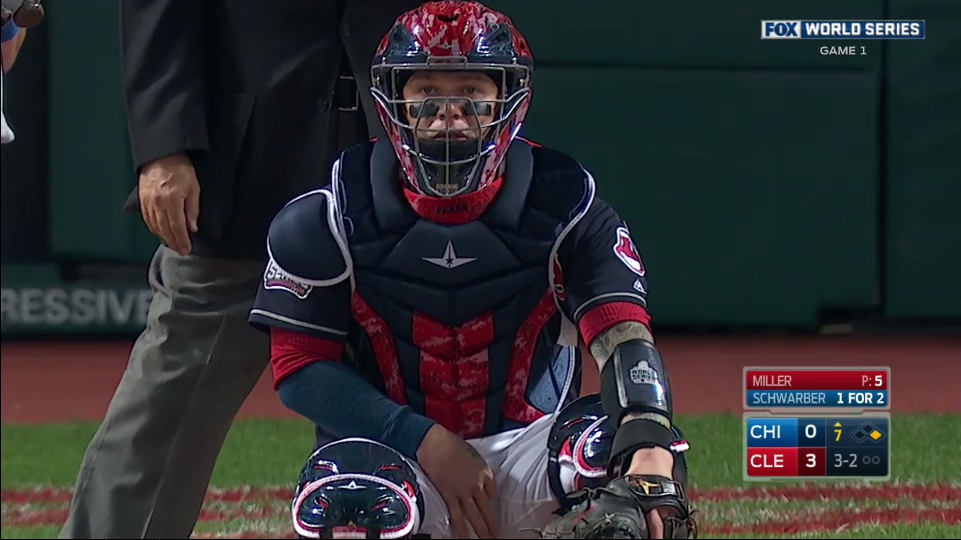 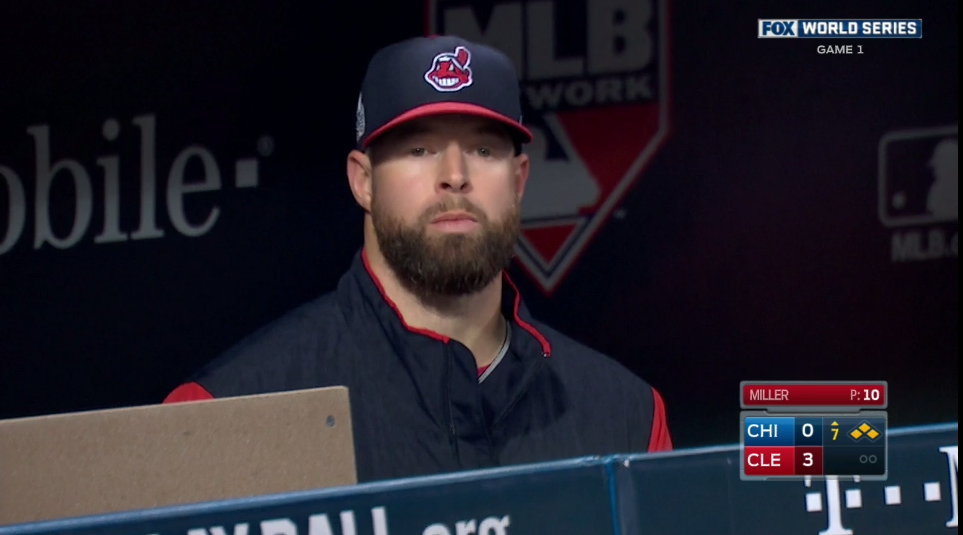 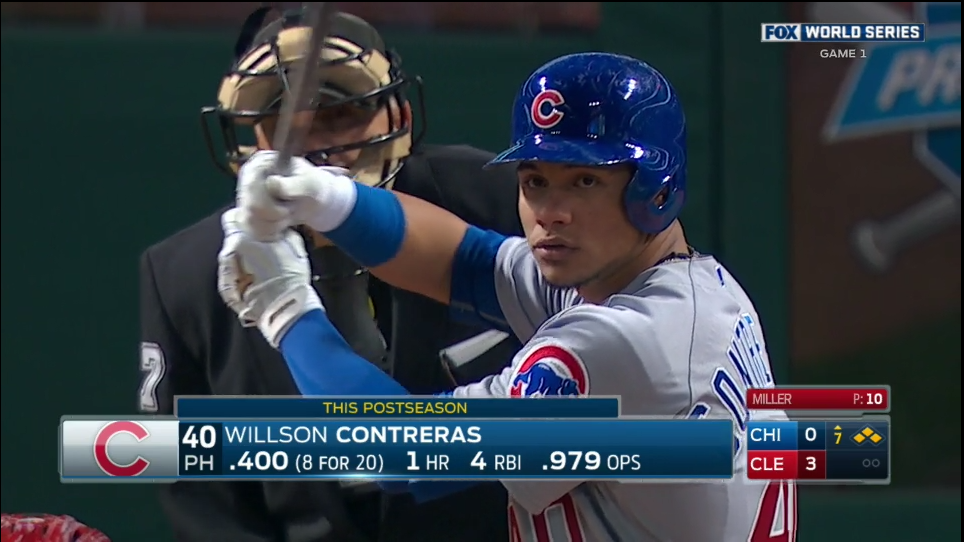 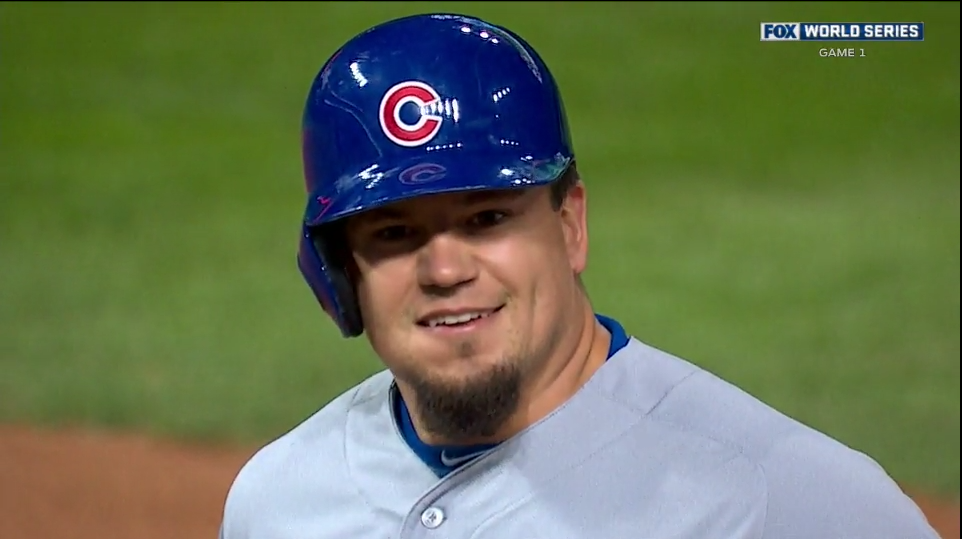 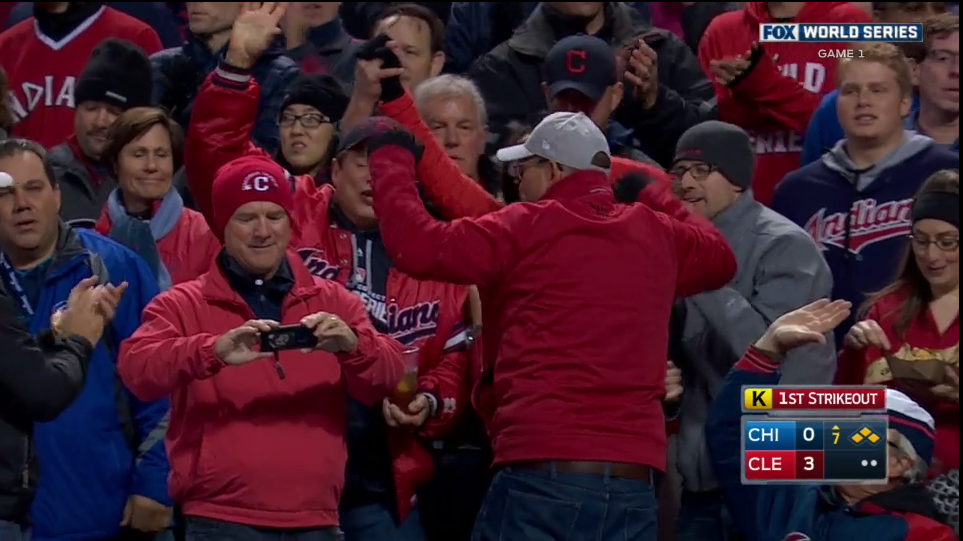 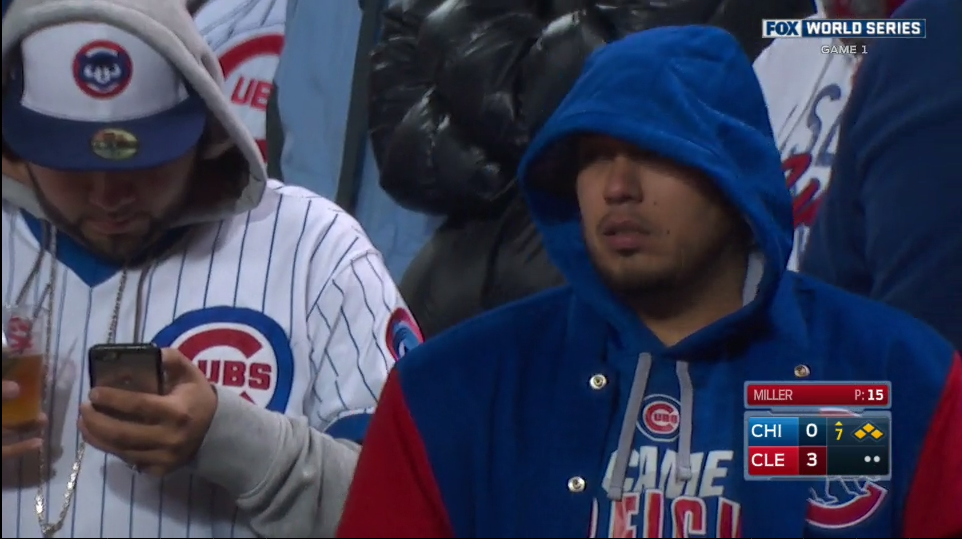 Let’s watch what people watch next.