There’s nothing more frustrating than knowing something is coming that you can’t do anything about. This is what it feels like to face Jake McGee.

As researchers dive into pitch sequencing tactics and benefits, McGee powers on as the most extreme example of a pitcher who has no interest in sequencing much of anything. No pitcher threw his primary pitch more often than McGee, whose four-seamer made up a mind-boggling 96 percent of his pitchers. Not only does McGee throw fastballs incredibly often in aggregate, he does so without taking special care to even show his secondary pitch, a slurvy curveball, with any regularity.

Fastball-first relievers take up nine of the ten spots on the list. Knuckleballer Steven Wright is the only pitcher to make the list with a non-fastball primary pitch. McGee clearly uses his fastball the most of all pitchers, though it’s difficult, in my mind anyway, to contextualize just how extreme 96 percent is. The chart below details another, perhaps more telling, facet of McGee’s fastball usage—one that puts it into a context that might be easier to visualize.

The relevant column in this chart is “Average Streak,” which indicates the average number of consecutive pitches the pitcher in question threw between other pitches. McGee threw, on average, 28 fastballs between curves in the last year. There is a steep drop off from McGee to Britton, and by the time we get to the bottom of the leaderboard—the seventh or eighth most extreme pitchers—we’re talking about just five or six fastballs between secondaries appearances. McGee went an average of 1.7 innings between non-fastballs.

Furthermore, McGee’s streakiness is highlighted by great peaks and not simply a sustained aversion to throwing more than a couple breaking balls per appearance. This last chart shows the longest streaks of consecutive pitches from relievers in 2014:

McGee’s longest streak of consecutive fastballs lasted from his July 20th appearance against Minnesota until his August 9th outing, also against the Twins. Not only did he have the longest streak of consecutive pitches last year, he had several that would also land him on this list if we were including more than one per pitcher. McGee had four-seam streaks that lasted 37, 38, 45, 47, 51, 60, 82, and 125 pitchers. If the leaderboard above were simply the longest streaks by all pitchers, McGee would take the 1st, 2nd, 3rd, and 5th spots, with only Doolittle’s 62 making the top 5 among non-McGee pitchers.

There is one last note that is worth considering, which takes McGee’s affinity for his fastball from the remarkable to the absurd. McGee’s four longest streaks (206, 125, 82, and 60 consecutive fastballs) all came sequentially, with just three curveballs between them. That is, from July 9th through September 20th, McGee threw 473 fastballs to just three curves. That’s 99.4 percent fastballs. (The exceptions, because you're curious: A whiff of Adam Jones; a pulled foul ball by Chris Coghlan; and ball four to Trevor Plouffe in the 12th pitch of an at-bat. He snapped the "streak" with a whiff of Jose Abreu.)

It’s nearly impossible to appreciate this freakishness in real time. Even a casual fan might notice that McGee has a tendency to throw a lot of fastballs, but a streak like the one described lasted months—realistically, how could you notice?

There’s something deeply fascinating about McGee’s absurd pitch usage over the course of these 29 outings. McGee threw 33 innings over the course of those outings, during which he struck out 40 opposing hitters and allowing just eight earned runs. McGee willingly went back to the well again and again even though opposing hitters presumably knew what was coming. (Einstein defined insanity as going to bat against Jake McGee over and over again and expecting a curveball.)

Velocity is his fastball’s most noteworthy attribute. The pitch ranges from 95 to 101 mph, which is elite for a lefty. In fact, Brooks Baseball notes that (measured against lefty relievers) McGee’s velocity last year would merit a 73 on the 20-80 scouting scale, nearly two and a half standard deviations faster than his contemporaries’. Additionally, McGee’s usage of the fastball varies minimally by count—or, obviously, at all. Against lefties McGee didn’t throw a single curveball when behind or even in the count. He threw just 14 when ahead, with eight of those coming with two strikes on the hitter.

As far as movement goes, McGee’s fastball does have quite a bit of arm-side run, but there isn’t a ton of variability in terms of the movement he gets on the pitch. (Relative to other relievers, the pitch-to-pitch variability ranks 137th out of 241 relievers.) Hitters should have a good idea of what McGee’s fastball will look like: 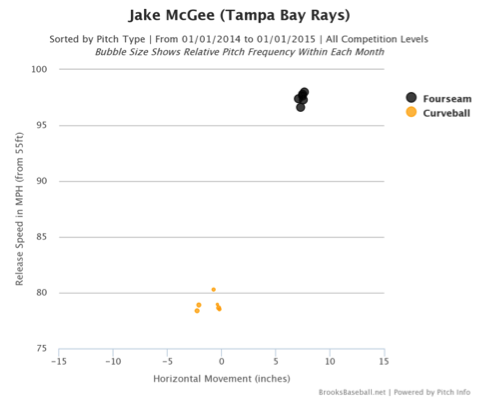 Moreover, McGee’s location choices are more of the same. Left-handed hitters will hardly ever see an inside fastball from McGee. By hardly ever I mean that McGee throws his fastball down the middle or further outside a whopping 82 percent of the time to lefties. Righties see some more diverse locations from McGee, though he mainly works up in the zone and predominantly on the outside: 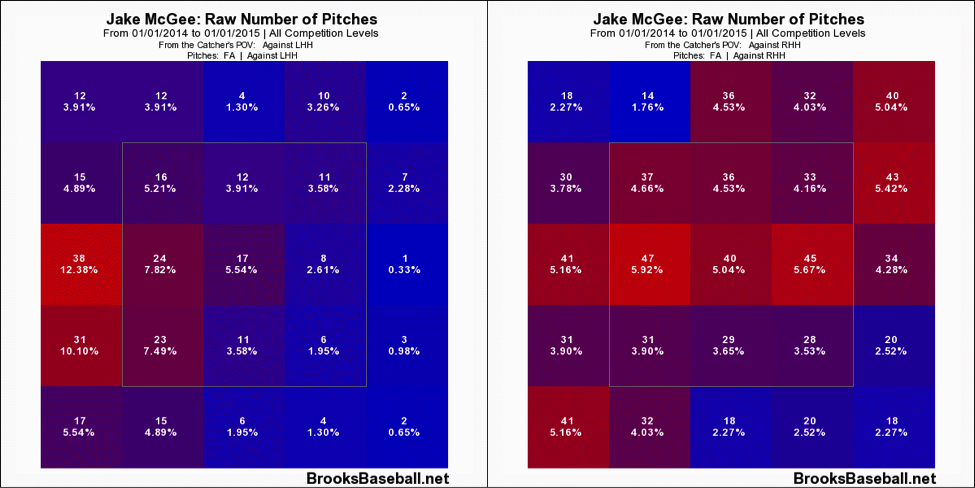 All of this stands to further impress the notion that McGee is either crazy or supremely confident in his fastball. Not only do opposing hitters know the pitch is coming, but they largely also know where he’s going to throw it and how it’s going to move.

So how is McGee successful? First and foremost, he throws 100 mph. There is also the movement, which despite being fairly unremarkable in its variability is impressive in its magnitude. But probably the most important component is that McGee has elite level command of his 95-plus mph fastball. Watch him strike out the side against the Orioles for a save on September 5th:

Go back up to that pitch chart three paragraphs up. The lesson you’d take from the chart against lefties might be that he really wants to keep the ball away to lefties. But the more important suggestion is that he’s really, really good at hitting his spots. He has a clear aim with his fastball—and he hits it enough to leave blue everywhere else. That’s not a chart about strategy as much as it’s a chart about execution.

There’s a hypothesis that pitchers who vary their approach and avoid predictable pitch sequencing are at an advantage. The idea being that varying your pitch sequences keeps hitters off balance and gives the pitcher an edge. McGee is, if nothing else, proof that the null hypothesis can’t be discounted out of hand. He posted a 1.89 ERA backed by a robust 1.73 FIP. Opposing hitters know what pitch is coming and they know where he’s throwing it. They know how fast the pitch is, and they know how the pitch moves. None of that matters. Opposing hitters swing at more than 50 percent of his offerings. More than a quarter of those swings result in whiffs. Jake McGee does not care for the concept of pitch sequencing at all. Something tells me he’ll be just fine moving forward without it. Regardless of whether McGee is a little mad or just supremely confident in his fastball, the results speak for themselves.

You need to be logged in to comment. Login or Subscribe
digiderek
Any opinion about how quickly and how fully McGee recovers from his surgery?
Reply to digiderek
BSLJeffLong
Tough to tell, but recent reports have been positive. My only fear is that the loose bodies in the elbow are merely a precursor to a second TJ :
Reply to BSLJeffLong
rawagman
Is this your way of comparing McGee to Mariano Rivera?
Reply to rawagman
BSLJeffLong
I don't think anyone compares to Mariano, but McGee's prolific heater is worth noting for sure.
Reply to BSLJeffLong
Michael
In case others were also curious, here's an explanation of the Rays' outfielders' playing rock/paper/scissors: http://www.draysbay.com/2014/7/9/5883395/the-rays-tank-late-inning-drama
Reply to Michael
eas9898
Great article. Thanks!
Reply to eas9898
BSLJeffLong
Thank YOU for reading!
Reply to BSLJeffLong
BrettLarter
Does he use "effective velocity" by going inside and then outside to add the feeling of an 11mph change? To righties, at least.
Reply to BrettLarter
BSLJeffLong
That's a good location-sequencing question that I didn't look into. Hmmmm
Reply to BSLJeffLong
hotstatrat
1. By comparison to Mariano Rivera, didn't Mo throw over 96% cutters?

2. Does throwing so many fastballs a good thing or a bad thing for the health of the arm and shoulder? (or neither, of course) I'd like to see a study of whether high % fastball pitchers have had more or fewer arm problems.
Reply to hotstatrat
rocket
I think past research has shown high slider % is the biggest one to watch. I'd be more concerned that if age or injury takes a bit off that elite velocity the one-trick pony loses his one trick.
Reply to rocket
BSLJeffLong
We (as in Brooks Baseball) has Rivera @ 89% cutters - http://www.brooksbaseball.net/tabs.php?player=121250&time=&startDate=03/30/2007&endDate=01/17/2015&s_type=2

Worth noting that he does rank in the top 1% of pitchers in streakiness, like mentioned above for McGee.
Reply to BSLJeffLong