Often, the content on the Baseball Prospectus website is driven by data collected during the research leading to an article. And readers can now benefit from some recent research on a daily basis, as six new reports have been added to the sortable statistics page, all of which will be updated daily throughout the season.

You can now look up the pace (time between pitches) for individual batters and pitchers, as discussed at length by Ben Lindbergh on Wednesday.

Separate reports for batter pace and pitcher pace from 2010–14 are available here:

Both links are on the Statistics page (also accessible through the "Statistics" button on the navbar at the top of almost every BP page) under the respective headings OFFENSE and PITCHING.

We've added game length and attendance information, both at the league and individual team level. Want to know how long (and how well-attended) games were, on average, at the major-league level for any season since 1950, or at various minor-league levels back to 2006? Or do you want to look up the game length and attendance for a particular team over the same stretch? Now you can, through the following reports:

Both links are on the Statistics page under the GENERAL heading.

Last month, we announced the publication of the Advanced Catching Metrics report, which includes both blocking and framing ratings for catchers from 2008–14. Now, we've aggregated the individual ratings into team-level receiving ratings for the same span of seasons. You can access these team-level stats through the following report, where you'll see that the top-ranked team has already distanced itself by over a win's worth of value from the bottom-ranked team:

Working with the pitch tracking and categorizing data provided by Harry Pavlidis and Dan Brooks, two products have been made current for 2014. First, the ever-popular PITCHf/x Leaderboards, which allow you to sort pitchers from various seasons by pitch velocity, pitch movement, and many other criteria.

We've also updated the Bullpen (Mis)Management Tool, which allows you to see which relievers a team has used most often, along with the average Leverage Index of their appearances:

You can access these (and other) PITCHf/x-based reports through the same "Statistics" button at the top of the page that contains a link to the sortables: 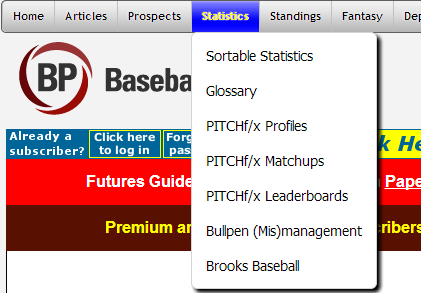 In addition, in a first step toward making the player cards more user-friendly, the reports combining MLB and minor-league (MiLB) stats on the player cards now show MiLB stats in italics, and allow a click-toggle to hide them all together (showing only MLB stats).

PECOTA at MLB.com
Lastly, while PECOTA projections have been available at Baseball Prospectus for months, they have now been incorporated into MLB.com player pages. An example from Mike Trout's page:

Thank you for your continued support of Baseball Prospectus. We hope you enjoy the new additions and upgrades.

You need to be logged in to comment. Login or Subscribe
gweedoh565
Both the wide range and high quality of offerings at BP continues to impress. Awesome stuff, thanks Rob et al.!

And kudos for landing PECOTA on MLB.com, big win!
Reply to gweedoh565
sbnirish77
MLB should stick with actual measurable statistics at their site instead of including ANY mathematical model results. What next - Fantasy baseball projections? This Buds for you.
Reply to sbnirish77
sbnirish77
In contrast, any improvements to use the Pitch / FX data for the common man is a very welcome development!
Reply to sbnirish77
BarryR
This is great. Now I just have to remember this stuff is available and where to find it.

Reply to BarryR
ravenight
Are PECOTA projections re-run taking into account stats so far, or are they only run prior to the season?
Reply to ravenight
mcquown
The spreadsheet, percentiles, and 10-year projections are run before the season. Wherever else 1-year PECOTA projections appear on the site, they represent rest-of-season projections (e.g. player cards, PFM, depth charts).
Reply to mcquown
MPC203
Awesome. Took 10 seconds to figure out the average MLB game last 15 minutes longer this year than in 2010 and has been on the rise every year in between.
Reply to MPC203
markpadden
Any chance you can add umpire performance reports (pct. of called strikes/balls which were correct/incorrect) to the Pitch f/x section?
Reply to markpadden