Every hitter has a hole. Barry Bonds, during spring training, had given an interview with ESPN in which he as much as said, "if you make your pitch, you can get me out." The issue wasn't whether a hitter had a weakness, but where it was. Every pitcher in the big leagues knew that Giambi's hole was waist-high, on the inside corner of the plate. It was about the size of a pint of milk, two baseballs in height and one baseball in width. Which raised an obvious question: why don't the pitchers just aim for the milk pint? — Moneyball, Chapter 7, "Giambi's Hole."

There seem to actually be two points in that paragraph, and they contradict each other. "Every pitcher in the big leagues" was saying that Giambi had a weakness, and that if you could throw him kryptonite it would get him out. But Bonds seemed to be saying something else: "If you make your pitch, you can get me out." Your pitch.

Andrew McCutchen might be the best hitter in the National League right now. Among qualifiers, he leads the league in True Average and OPS+, and his numbers are almost identical to the numbers he put up last year, so we're talking about 1,300 plate appearances at this level. There is a scouting report that teams will go over before every series with Pittsburgh, and it will say something about McCutchen. Maybe it says something generic like "hard in, soft away," or maybe it says "he has a hole, waist-high, on the inside corner of the plate, about the size of a pint of milk."

But a catcher will tell you that, when he's deciding what pitch to call for, the batter's strengths and weaknesses aren't the first question on the decision tree. First is the pitcher's strength. If his curveball is garbage, then you don't call for it just because that's what got McCutchen out twice when an advanced scout saw him two weeks earlier. Then you think about the situation. Then you think about whether the pitcher is commanding a particular pitch well, or commanding to a particular location. The key, more than thinking about the batter's pint of milk, is calling a pitch that the pitcher is going to be able to throw well.

I wanted to see what this looks like with McCutchen. So I picked three pitchers who have different stuff. Not the furthest extremes—no Dickey/Chapman pairing—but a power pitcher, a finesse pitcher, and a guy in the middle. The three all faced McCutchen multiple times this year. They all had plate appearances that, in ball-strike sequence, resembled each other: a first-pitch strike, then two balls, then a strike to even the count. That means that five times they were in the exact same situation against McCutchen. Presumably they had very similar scouting reports on McCutchen, too. So would their approaches to McCutchen resemble each other? That's our question today.

On the left is Felix Hernandez. In the middle is the soft-tosser, Mike Leake. On the right is the pure power pitcher, Jeff Samardzija. All three plate appearances came after the pitchers had seen McCutchen multiple times before this day, and multiple times on this day, so McCutchen has already seen everything they have to throw.

Already, we see a) very different first pitches and b) inside-flap summaries of each pitcher's stuff. Felix puts a low-90s sinker near the bottom of the strike zone, just about splitting the middle of the plate. Leake drops a big curveball over the middle for a stolen strike. (Once I determined I was looking for strike-ball-ball-strike sequences, I had a hard time finding a right-handed soft-tosser for this exercise, because those guys virtually all start McCutchen with something defensive and fall behind in the count.) And Samardzija just throws as hard as he can, almost right down the middle.

All three pitchers want to do the same thing here—get ahead—but they also want to do it without giving up any advantage later in the at-bat. Samardzija has the power to do just that: he aims a four-seamer right down the middle, and gives away none of his secondary pitches or any information on what he might like to do when it gets to two strikes. Felix has to be a bit more exact to get his strike, but he is exact, and he gets it while holding the rest of his pitches in reserve; he would certainly have been happy had McCutchen swung and tried to hit this, too. Leake jumps right into trickery mode. He'll treat almost every pitch to McCutchen like it's 0-2 and the worst thing to do would be to give him something he can actually hit.

Hernandez goes with a changeup, which is nearly as hard as his fastball but gets more sink and is Hernandez's groundball pitch. Leake throws a cutter and tries to shave the edge of the corner. Samardzija throws as hard as he can again, but moves inside with it. All three are working sequences here, and all three are different: Felix throws a pitch that is supposed to look like the fastball he just got a strike with, but that moves out of the zone and can't be hit anywhere but on the ground; it's also a little slower, perhaps trying to make McCutchen's incredible bat speed too fast. Leake is taking advantage of having just thrown a slow curve; this is the best chance he has of making a fastball actually look fast to McCutchen, though he still isn't bold enough to throw his hard fastball, or to throw it in the zone. Samardzija tries to speed up his fastball by moving the location.

None of these sequences resembles each other, though they might all be to some degree responses to McCutchen's bat speed.

Felix throws a second consecutive changeup. Leake throws a changeup, and again stays away. Samardzija goes back outside, this time with a hard cutter.

At this point, Felix has thrown three pitches, all to the same location, and within a small range of velocity and movement. Leake has thrown three pitches, all of them from different families. Most of what he can do to a baseball—in spin and in velocity—has been shown or alluded to. Samardzija's cutter is a wrinkle, but he's basically working a very simple plan: Hard out, hard in, hard out.

Notably, no pitcher has thrown any pitch that was like any other pitcher's pitch, in type or location, with maybe the exception of Leake's changeup. On each individual pitch, the three are doing different things; in sequence, they diverge even further.

There's an Andy Warhol movie that just shows a guy sleeping for five hours. They say that it's so calm and quiet that, when the man does something small like turn over, the viewer gets an adrenaline rush, like it's a major plot twist. Here, Felix throws a fastball that's something like an ambush after the previous three: It's harder than anything McCutchen has seen, it's right in on his hands after everything on the outer half, and it's the first pitch he's seen above his knees. The sequence that precedes it makes you think it turns the 94 into, effectively, something much faster.

And here, with two strikes and one to waste, we finally get to see which strikeout offering each pitcher has been working toward this whole time. Felix, like any good story, echoes the journey's beginning: He repeats the low-90s fastball, in almost the exact same location. It's easy to appreciate why McCutchen was frozen; he has seen Felix twice try to get him to chase at pitches that started in that location and fell out of the zone, and the previous pitch was mid-90s and at his knuckles. It's a sequence that took perfect command to pull off, but Felix had it. 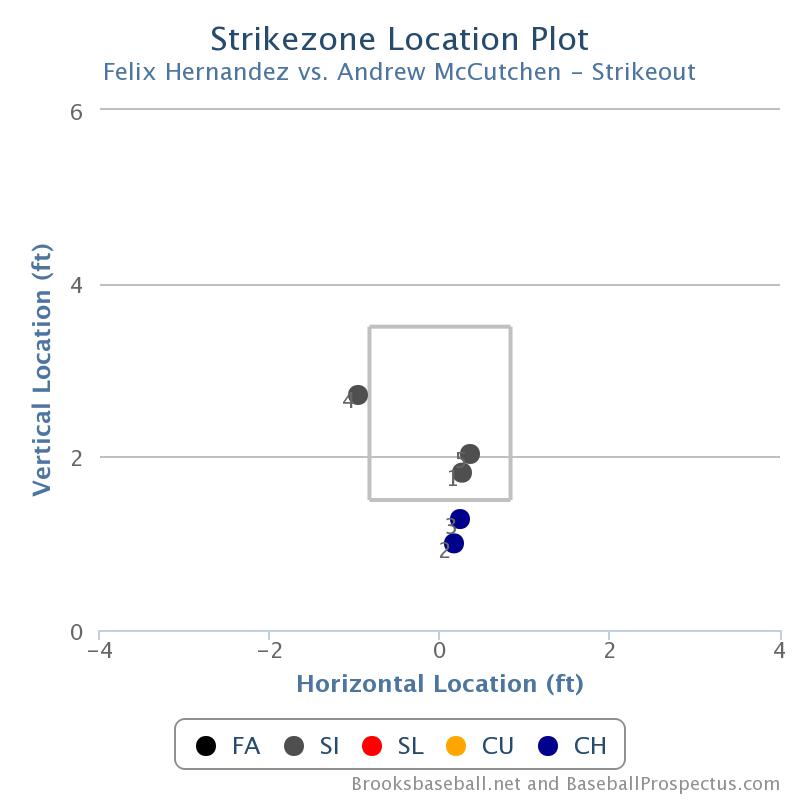 Leake went with the last pitch he had in his pocket, a slider. Location was terrible, and so his fight with McCutchen goes on—he struck him out on a full-count fastball one pitch later. To the very end, Leake's strategy was simplicity masquerading as complexity: Don't throw a fastball, don't come anywhere over the plate (he did, accidentally), don't give in, don't fight on his terms. It wasn't all that impressive and you get the sense that he could have given up three homers in that at-bat, but maybe that's ungenerous. The mediocre curveball on the first pitch worked; McCutchen didn't swing. The mediocre cutter on 2-1 worked; McCutchen didn't swing. 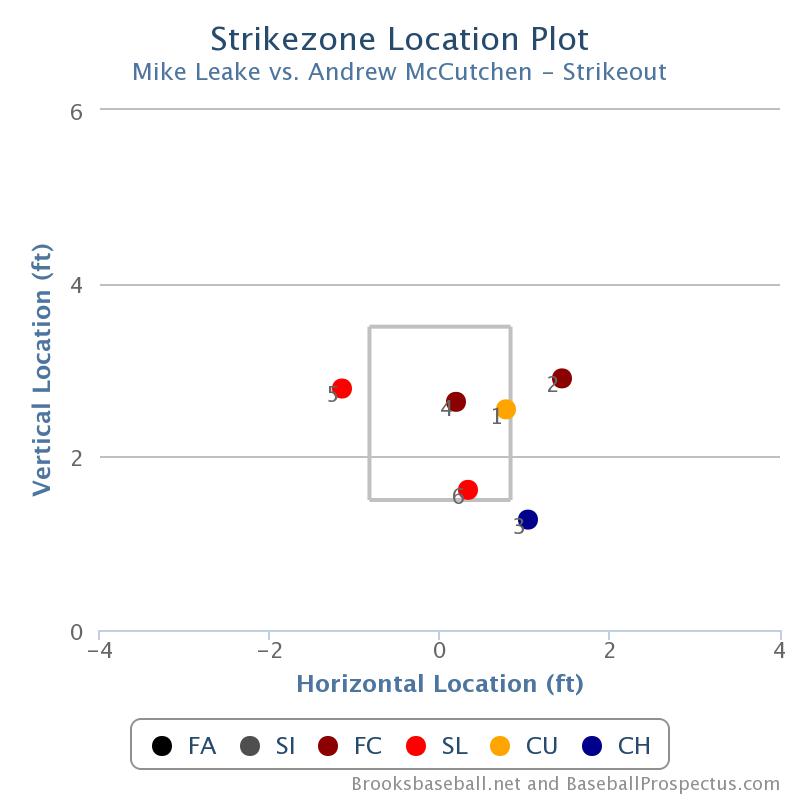 And then there's Samardzija, who gambled that his fastball would be good enough (it was) until he had to put McCutchen away, and then had a pristine slider, never even been out of the box, to startle McCutchen with for a punchout. 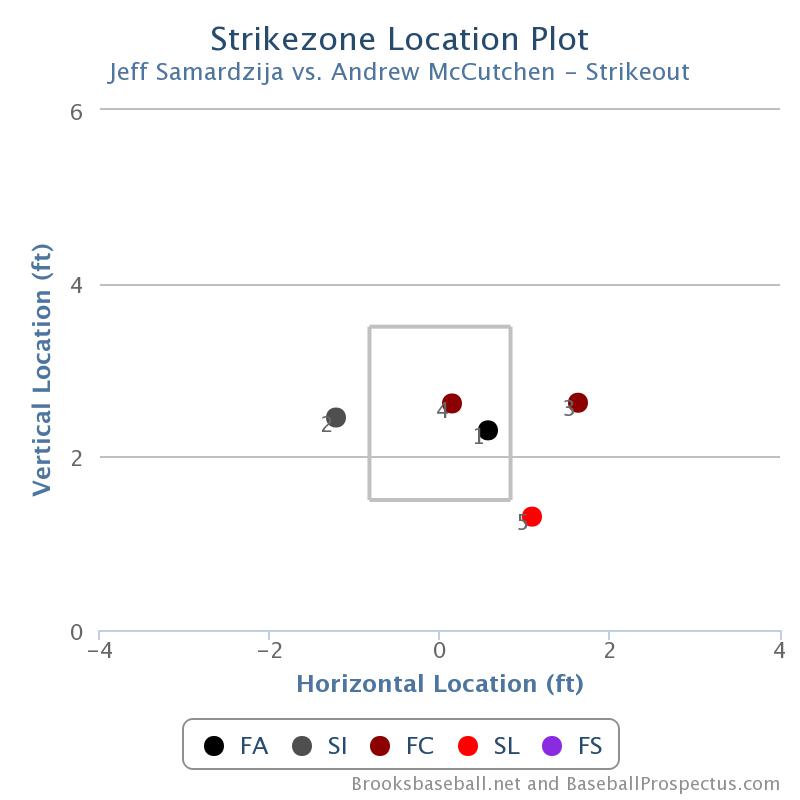 P.S. Adrenaline rush from that Warhol film? Really?
Reply to sam19041
redguy12588
It shows a healthy respect towards McCutchen that there's no secret formula for getting him out. I like the Bonds quote, make your pitch in the correct sequence and you can get anyone out.
Reply to redguy12588
UKMariner
Great article - if anything, this just makes me love Felix all the more.
Reply to UKMariner
surfdent48
Great article.

Reply to surfdent48
abywaters
fantastic work
Reply to abywaters
Grasul
Nice job.
Reply to Grasul
Rfgilles1
Drawing any conclusions from this article is pretty useless since it's based on 3 at-bats.

Man, it's Friday. This was interesting.
Reply to Pumpido
BeplerP
Sam, this is superb. Next for you: paying off the national debt! Seriously, this is as thoughtful as any BP piece I have read this year, and I will be chewing over its lessons into, well, into spring training! Regards,
Reply to BeplerP
hannibal76
Great piece on a great hitter. It's too bad the Cincinnati Reds' strategy for dealing with McCutchen is simply to throw at him.
Reply to hannibal76