Despite living in a world filled with baseball GIFs, team-wide hand gestures from Ashton Kutcher movies, and the near-instantaneous meme-ification of every highlight, interview, and tweet relating to Major League Baseball, the game’s merchandising world is still a sad, sorry state of affairs.

Sure, we’re occasionally gifted with a Bernie Lean bobblehead or Marco Scutaro Snow Globe, but too often we’re presented with the same standard product, one aimed strictly at the largest possible swath of consumers, all interesting facets of design smoothed out in favor of the market research and focus group gods. It’s how we arrived at the current Padres uniforms. Or the terrifying all-knowing, all-seeing MLB Forest Face.

Fortunately, there is one place left on the globe for the discerning baseball fan to shop. One piece of land where baseball merchandise is fun, exciting, and completely different. And that place is Japan. There, on an island replete with Wladimir Balentien home runs and 136 kph fastballs, is an oasis of mass-produced consumer goods that awaken a fire within.

To help you, the Baseball Prospectus reader, navigate that minefield, we’ve broken the products into categories like jerseys, t-shirts, and foodstuffs, listed the prices in American dollars, and graded them on the only scale suitable for this kind of thing.

I speak of the Wily Mo Pena Tumbler Scale.

Through the powers of alchemy and corporate science, the SoftBank Hawks have transformed Wily Mo Pena and 11 other players into a bulbous container that you can drink out of, allowing you to possess the power of Pena while taking in your daily allotment of Cactus Cooler. To show you why Wily Mo Pena is a perfect combination of thirst-quenchingness and god-like strength, and because watching Wily Mo Pena hit home runs is fun, here are his 2011 MLB highlights:

With the grading system explanation out of the way, let’s explore what else the NPB online shop has to offer:

If you have to ask why a team named the Hanshin Tigers would make a jersey featuring leopard spots and not tiger stripes, then you’ll never get this, man. It’s like, art, you know? It plays with conventions.

If there’s one thing I’ve ever wanted from a baseball jersey, it’s the feeling that I’m wearing a piece of clothing stitched out of Disney’s Fantasia. Finally, the Yokohama BayStars Star Night jerseys have filled the hole in my life. 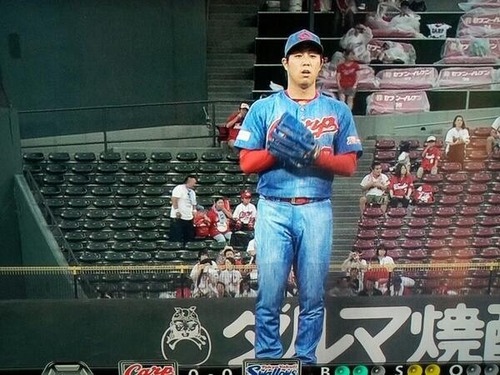 It’s long been said that raw Japanese denim makes for the finest jeans, putting to shame our Levi’s, Wranglers, and 1791s, the denim line owned by Glenn Beck.

The Hiroshima Carp put that truism to the test recently when they outfitted their entire team in denim uniforms, including caps, jerseys, and pants. Dear god, do you think they made the jock straps out of denim too?

Hopefully in honor of casual Fridays, the Carp will wear these once a week.

Hokkaido Fighters’ I Am Baby 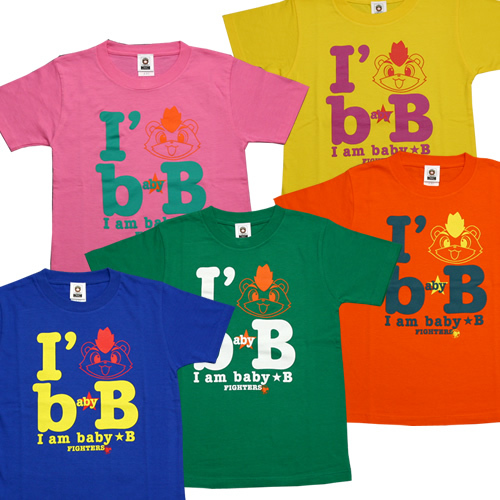 Parents, don’t you just hate it when you’re out for the night and someone comes up to your toddler and starts talking to them, not realizing that the creature in its bassinet is nothing but a baby that hasn’t even bothered to learn words yet? With this t-shirt, you can ensure that no more such awkward one-sided conversations will ever occur.

Softbank Hawks: I Will Enjoy Baseball

For the enthusiastic person who doesn’t currently like baseball, but knows they one day will.

Those days may be gone and forgotten, but at least you can relive the memories with this sweater from the Hiroshima Carp. It’s perfect for Christmas parties, family reunions, funerals and everything in between.

In light of Wladimir Balentien’s record-setting home run torrent (he has already broken the NPB record and is hitting .341/.464/.814, even if scouts still wonder whether he could cut it in the big leagues), there is no better time than now to buy this Home Run Maker t-shirt.

However, what really sells the tee are the phrases Balentien is yelling. I like to pretend that after each home run, Balentien circles the bases and then shouts to the heavens, arms raised above his head, wide smile across his face, “I did it! I’m Balentien!”

Craig Brazell has had a strange career. After hitting only one home run in 40 career major-league plate appearances, he gained passage to the NPB after hitting 39 in Double-A and Triple-A in 2007. After heading overseas, Brazell caught fire, making his own run at the home run record when he smashed 47 HR in 2010 for the Hanshin Tigers.

So even though Brazell has only had 143 AB this season, hitting nine HR in that time, if there is anyone who deserves a Stone Cold Steve Austin-esque t-shirt proclaiming “I Owned It,” where “it” is “A Home Run Dedicated To The Fans,” it’s Craig Brazell.

After leaving American baseball in 1992, Glenn Braggs played four years in Japan, retiring in 1996. And sure, in those four years he hit .300/.397/.544, but still, it was only four seasons. And yet, 17 years later, you can still purchase a Glenn Braggs t-shirt, one in which he appears to be fondling a handful of baseballs, tapping into both your nostalgia and subconscious sexual desires.

1. Tony Blanco is the name I would use if I ever decided to become a hitman or lothario.

2. This is a t-shirt featuring a ballplayer disguised as an unlicensed Terminator 2 robot.

3. You could easily have this tattooed on your body and the only things people would say are, “That’s awesome,” and “Tony Blanco? Really?”

If it weren’t for that pesky Wladimir Balentien, we would all be talking about Tony Blanco’s season. He has a .490 career MLB OPS, but this year, he’s hitting .327/.411/.618 with 37 HR. It’s his third 30-plus HR season since heading over to Japan in 2009. So yes, Tony Blanco has earned his unlicensed Terminator likeness.

There are few things I fear more than a future in which humanity has been defeated by the robot uprising, with mankind becoming the techno-serfs and protein fuel for our emotionless robot overlords. Despite that, I am extremely excited for the day that robots begin to play baseball, because 1,000 foot home runs and no more Tommy John surgeries sounds great.

The Seibu Lions are like the Willy Wonka of baseball teams with their collection of food and food-like products. They have candy stuffed inside a sweet potato boat, some sort of cheese-tasting candy, green onion rice toppings, and sake, among a host of other products.

They even have their own fizzy lifting drink in the form of Seibu Lions brand beer.

I’m always shocked that more MLB teams don’t have their own beers (though supposedly there is a Braves-themed one available in Turner Field and a special Miller beer for the Brewers), but I doubt they have descriptions as good as this:

“This is the beer of throat and clean to use the hops and malt which selected carefully, I made â€‹â€‹a delicious groundwater of Kurohime plateau.”

This is the beer of throat and clean.

We have a disturbing trend in this country of not keeping our baseball-themed candies in production. Lord knows I’ve been looking for an edible Ken Griffey, Jr. candy or Henry Rodriguez-branded “Oh Henry” bar for years.

Fortunately, the Softbank Hawks ensure that everyone can celebrate Sadaharu Oh’s old home run record by eating this delicacy of sponge cake and…chestnut grain bean jam. Which makes this the baseball version of a Fig Newton. And that’s exciting in its own way, I suppose.

Nearly every team has a variety of Star Wars (not to mention Spider-Man, Mickey Mouse, and Peanuts) merchandise, but as far as I can tell, only the Nippon Ham Fighters were smart enough to put an image of Darth Vader pitching on an edible snack.

My only wish is that these were black-and-white cookies so that one could defeat the dark side while eating.

While you can also purchase Starman Curry, complete with adorable cat mascot on the box, if you want the one that has the “taste of the dorm that young players are eating,” then you’ll want this one.

If it’s anything like my dorm, it will taste like Kraft macaroni and cheese dust and $9 handles of vodka.

Tired of the same boring bobbleheads featuring players swinging, pitching, and diving? Do you wish there was a bobblehead that more accurately reflected your life in international corporate business affairs? Well, you’re in luck.

This bobblehead of Daisuke Kusano, director of public relations for the Rakuten Golden Eagles, also doubles as a business card holder. Which makes it a tax write-off.

I’m not really sure just what this is. And while the “Happy Jet” is made for inflating balloons, I’m sure it’s used for that about as often as your tie-dyed pipe is used for tobacco.

If this looks like the kind of thing you’d like to bring to a party and/or the bedroom, it’s yours to acquire.

Finally, something combining Han Solo frozen in carbonite, “I just blue myself” jokes, and baseball. Even better, there are 14 different options in the Dragons’ shop. You never need to shop for wall art again.

These are just merchandising perfection.

Now if you’ll excuse me, I have to put on my Wily Mo Pena beard and use my Happy Jet.

You need to be logged in to comment. Login or Subscribe
piraino
Where can I buy the Wladimir Balentein Home Run Maker t-shirt? I would wear that every day.
Reply to piraino
sam19041
This is awesome. Web link for US buyers please!
Reply to sam19041
pjbenedict
Way fun!

The Twins had a ballpark-only brew made by Surly for a year, but alas, it's gone. It was delicious :-)
Reply to pjbenedict
APer930
I just found my dream shoes.
Reply to APer930
jpaternostro
The shoes are amazing, but I think I am partial to Seth Greisinger baseball mecha t-shirt.
Reply to jpaternostro
kbrown22
I'm still not 100% sure what #sparkle means, but I think that the Carp Sweater has it.
Reply to kbrown22
rawagman
Thank you for the funny. That was awesome. I would own more baseball swag from the Western Hemisphere if it was anywhere near as goofy as the Japanese goods.
Reply to rawagman
ArseneLupinIII
Regarding the happy jet:
Jet-balloons are a pretty popular custom at Japanese ballgames, to the point where some teams have banned them. Yakult had a sign prohibiting the practice when I saw a game there in 2011.

Here's a video of a massive, slightly disturbing, release of a bunch of them: http://www.youtube.com/watch?v=hDhfR8-QTpg
Reply to ArseneLupinIII
BPowers97
The Sadaharu Oh picture kind of resembles the Jerry West NBA silhouette, doesn't it?
Reply to BPowers97