Just over a month ago on Effectively Wild, Sam Miller and I surveyed the 2014 options that teams would have to decide to pick up or pass on at the end of this season. When we came to the Indians’ $8 mutual million option on Ubaldo Jimenez, we very nearly dismissed it without saying what it was.

Me: Ubaldo Jimenez.
Sam: Pass.
Me: You don’t even want to hear the amount?
Sam: Well, what is the amount?
Me: The amount is $8 million.
Sam: Given who’s a free agent starter this winter, it wouldn’t kill me if a team did that at all. I would pass, but it wouldn’t break my heart.

Barring injury, there’s probably never a time when we should dramatically alter our opinion of a position player based on a sample as small as Ubaldo’s post-podcast performance. But with pitchers, sometimes a little over a month makes a major difference. Jimenez has made six starts since Sam and I discussed him. In those six starts (and 38 innings), he’s allowed 10 runs, eight of them earned (1.89 ERA). His BABIP over that stretch is .304, so he hasn’t benefited from luck on balls in play. He’s simply pitched well, giving up only one homer, getting groundballs on almost half of his balls in play, and recording 47 strikeouts against 13 walks. Since the beginning of August, his zone and strike rates are up a couple percentage points, and his whiff rate is up 25 percent. Two of his last three starts—including his scoreless seven-inning outing against Kansas City on Monday night—have been 10-strikeout, no-walk performances, the only two such starts he’s ever made.

Today, Ubaldo’s option looks like almost as big a bargain as Ben Zobrist’s. Such a big bargain, in fact, that it doesn’t make sense for him to exercise it. Granted, teams would (and should) be wary of Jimenez, who was awful for the Indians in 2011 and 2012. But say he were to extend his string of excellent outings over his final few starts. In that scenario, it wouldn’t be unrealistic to think that he could decline the option, hit the open market, and either command a multi-year deal or get twice what the option would have paid him him for a single season.

The truth is that Sam and I were sort of slow on the uptake. Between Ubaldo’s disastrous, seven-run second and third starts of the season and his outing just prior to the podcast, he’d recorded a 3.36 ERA over 104 1/3 innings, striking out almost a batter per inning (albeit with iffy control). But having seen him struggle so mightily since coming to Cleveland, we weren’t willing to adjust our expectations based on anything short of a complete return to form.

If you squint, what’s what this recent run looks like. It’s not just that Jimenez’s results have improved; his stuff has also bounced back. The righty’s average four-seamer velocity has ticked up about two miles per hour since June. 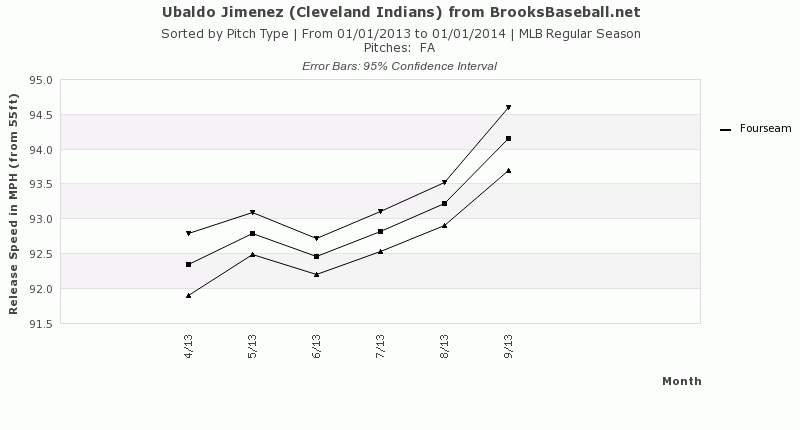 Lately he’s been averaging almost 95 miles per hour, which—while still a far cry from his Colorado peak—is still better than we’ve seen from him since he descended from Denver.

So where did that extra speed come from? In May, Jeff Sullivan noted that Jimenez had made some minor mechanical tweaks to speed up his delivery. But many mechanical tweaks don’t last, and in May, Jimenez wasn’t throwing any harder than he had for most of 2012. I asked in-house mechanics expert Doug Thorburn—who covered Ubaldo’s mechanical collapse last season—to take a fresh look at Jimenez’s delivery in his start from last night. Here’s what he said:

He is slower to the plate from both the windup and the stretch, as compared to where he was earlier in the year. I compared the stride times from his July 4th start (versus the Royals) to Monday's game (also against KC), and here is what I found:

Time (in seconds) from when the front foot lifts off the ground to the point that it touches down into foot strike:

The timing discrepancies might appear to be small, but consider that his delivery on 9/9 takes about 20 percent longer to execute, on average. He has added some additional stall tactics in the quest to keep his upper half closed until after foot strike, as he had a glaring tendency to "fly open" with the front shoulder in previous seasons (and earlier this year). From the windup, his stall tactic is an adjustment of the overhead arm motions—on 7/4 he would bring the arms down in unison with the leg lifting upward, as if they were pulled together on a string; but on 9/9 he would trigger leg lift before lowering his arms, which acted to delay the rotational phases. He also exaggerated the max leg lift position on 9/9, using a slight pause at maximum lift. The stall at max lift is more apparent when comparing the stretch deliveries, and Ubaldo also exaggerated his drop-n-drive in the game on 9/9.

Slowing down typically opens up the window for timing to fall off track, but in this case the associated benefits of delaying upper-body rotation outweigh the negative side effects (at least in the short term). Jimenez continues to add new wrinkles to an already inefficient delivery, and though he has momentarily discovered a timing pattern that works, his mechanical positioning is otherwise inconsistent—he still has a spray chart of landing spots on the mound, for example. But the extra delay has helped his torque, and Jimenez is throwing harder now than at any point in the season, with velo that has followed an upward trend since July.

Here are Ubaldo's deliveries from the windup on July 4 (left) and last night (right):

The glass-half-full interpretation of Doug’s observations: Jimenez made mechanical changes, and those changes produced a measurable uptick in his stuff. If he keeps doing what he’s doing, he’ll keep experiencing success.

The glass-half-empty interpretation: Jimenez made mechanical changes, and those changes produced a measurable uptick in his stuff. But Jimenez has made mechanical changes before, and eventually abandoned them or proven unable to keep them consistent. Worse, Jimenez hasn’t so much cleaned up his mechanics as he has made them more complicated. Even the scout who recently raved that Jimenez looks the best he has in three years acknowledged that “the delivery has a lot of flaws.” His release points from last night (right) look as widely disbursed as they did three months ago (left), and not nearly as tight as, say, Madison Bumgarner’s (below):

This is the Apollo 13 approach to pitching mechanics. An oxygen tank blew up, and the Service Module has to be abandoned? Okay, we’ll use the Lunar Module as a lifeboat. The square Service Module carbon dioxide scrubber cartridges don’t fit the round receptacle in the Lunar Module? Fine, we’ll build a makeshift scrubber out of tape, cardboard, and a plastic bag. It will work for a while, but not forever, and there’s still a hole in the side of the Service Module. Jimenez has found a way to compensate for his suspect mechanics. But because he hasn’t addressed his delivery’s deeper flaws, this might be more of a temporary fix than a lasting solution.

A few, more minor developments worth mentioning: perhaps as a result of his new look on the mound, Jimenez's release point has risen slightly. And assuming it's not a variation of the same pitch, he's also decreased his splitter usage and brought back his changeup, which he’d thrown in previous seasons but had abandoned (or at least relied less on) for the first few months of this year (and which the aforementioned anonymous scout deemed "really good"). And according to Harry Pavlidis' pitch classifications at Brooks Baseball, Jimenez has even begun to mix in a few cutters, which would be a new offering for him.

Jimenez shares a rotation with Scott Kazmir, so his comeback might not be the best on his own staff. Still, it’s still unusual to see diminished speed come back so strong, and it’s exciting to see Jimenez experiencing such success. But let the buyer beware: if this is just eye of the storm, the other side of this successful stretch could be ugly.

You need to be logged in to comment. Login or Subscribe
ceadie
Remember at the end of the mission (season) the crew (team) jettison the service module (Jimenez) and scramble into the command module (free agent) for atmospheric reentry (off season).
Reply to ceadie
bline24
This is an awesome piece of in-depth analysis. I'll take this over another SI-style puff piece anyday. Thanks!
Reply to bline24
hotstatrat
Right. This is what we (if I may speak for us) want to know. Not just who is hot that we may not have noticed, but whether that hotness is sustainable. Thanks.
Reply to hotstatrat
lichtman
His delivery both now and earlier in the season looks awful to me. That is somewhat confirmed by the plot of his release points but I don't actually know how that compares to the average pitcher or the average pitcher with a similar velocity.

However, the bottom line is that if his velocity is up 1.5 to 2 mph, and everything else is roughly equal, then we should see a marked increase in performance (true talent-wise) to the tune of around .4-.6 runs per 9, according to this article:

In other words, you can speculate all you want about his mechanics and even the reason for his uptick in velocity, but if he continues to throw at 94-95 rather than an 92-93, then we should expect much better performance.

Let's face it, the guy had 2 great years, 09, and 10, and 2 awful one, 2012. The rest were good. If he can keep up a velocity of 93-95, I expect him to be good. Not great, but good. With that delivery, in my opinion, the only way to be a great pitcher is to throw 98.
Reply to lichtman
bornyank1
I agree that as long as he's throwing this hard, he'll have more success. I just don't have a lot of confidence that he'll be able to sustain whatever tenuous mechanical equilibrium is allowing him to do that.
Reply to bornyank1
chabels
Any chance some of the resurgence is due to weaker opposition? Did you look at OPS faced at various periods?
Reply to chabels
bornyank1
No, I didn't. I think that would be a fairly minor factor.
Reply to bornyank1