Rangers left fielder David Murphy is normally a solid offensive contributor, posting a career .277 TAv. This season, he’s been subpar at just .234. What’s a manager to do? Why not change his position? Ron Washington, short of arms in a 17–5 blowout at the hands of the Red Sox on Tuesday night, decided to audition Murphy as a relief pitcher.

Position players, as I have previously established, are actually quite serviceable as emergency pitchers. Let’s scout Murphy and see how he compares to previous position players who’ve been pressed into service on the mound.

Mound presence
Murphy seemed very relaxed on the hill, chuckling to himself after recording a strikeout and chatting with infielders. He adjusted fine to a stretch position after starting with a windup. He also cut a pretty quick pace of 17.2 seconds between pitches. This may have been only a low-leverage situation, but Murphy was in control.

Fastball
Position players’ fastball speeds vary widely, but typically they range from the upper 70s to the mid-80s. Murphy was on the lower end of the spectrum, hitting between 76 and 80 on the gun. Not exactly overpowering, but then again Jamie Moyer was able to pitch at that speed and get outs. I don’t know if I’d say the fastball had “life,” but it did average about 11 inches of vertical spin deflection.

Secondary pitches
A lot of position players carry breaking balls and off-speed pitches in their back pockets, but Murphy was a unique exception. He threw four knuckleballs averaging about 66 mph. One even floated in for a strike three call against Mike Carp (thanks in part to a good frame job by A.J. Pierzynski).

Murphy’s knuckler, in a small sample size, showed some variation in spin pattern (see below)—which is essential to making the pitch effective. R.A. Dickey still has by far the best knuckler in the game, but for an outfielder who hadn’t pitched since high school, Murphy’s was pretty impressive. With some work, he could probably develop the ability to impart occasional topspin to the ball so that it’s even more unpredictable. 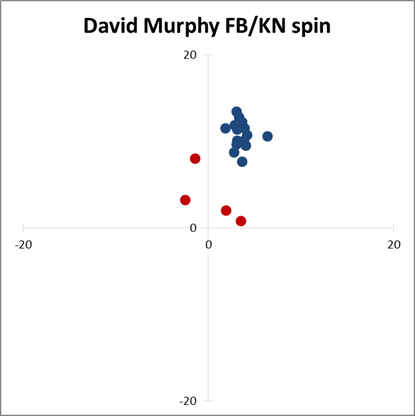 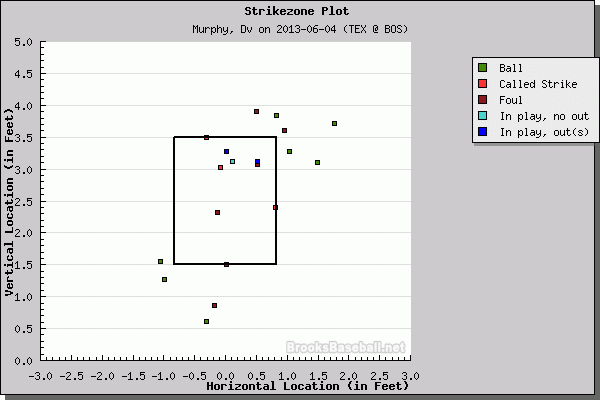 The spread of the locations is pretty standard for a left-handed pitcher with a ¾ arm slot—up and away or down and in to righties. He was decent at changing eye levels, but he did leave a few pitches in very hittable spots. The three balls in play were all hit pretty hard, and only the BABIP gods spared him from more than the one base hit.

Mechanics
Murphy looked awkward in his delivery. The initial motion in his windup is free and easy, but his stride is short and the way his leg lands forces him to twist off of his center of gravity as he accelerates. It’s a good thing he’s throwing only 78. 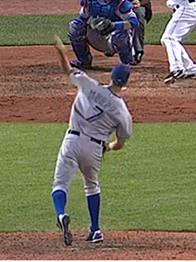 His short stride does leave him in good fielding position, at least.