A pitcher's throwing arm is the hardest-working limb on the playing field, so it figures to get all the attention, but the oft-ignored glove-side arm has the potential to either aid the delivery or throw a wrench into the system. The non-throwing arm plays a non-trivial role in mechanical assessment—I have occasionally dropped a reference to a pitcher with a “sloppy glove” or one who “keeps the glove out in front of the body,” but I have yet to go into detail on the topic.

We have covered the basic tenets of Pitchology this season, from balance to momentum and hip-shoulder separation, but today will be an advanced lesson in the theory behind one of the finer elements of pitching mechanics. So if the class will indulge me for a lecture, I'll don the tweed jacket while the rest grab a mitt and meet me on the diamond for a virtual field trip.

Understanding the glove phenomenon begins with the kids. Young players lack the strength to coordinate a complicated pitching delivery on a consistent basis, and small issues are often magnified, such as the impact of wearing a 1.5-pound mitt. A pound-and-a-half might not sound like much, but for a growing kid who is trying to repeat a complex motion dozens of times in a row, it can be surprisingly difficult to coordinate the weight difference between the glove and a five-ounce baseball. At the NPA we advocated the use of a lighter mitt for Little Leaguers in order to minimize the potential problems caused by a heavier glove.

Professional pitchers are not nearly so troubled by the weight discrepancy, but the glove side still has an impact on mechanical efficiency. Shoulder rotation is a major element of the delivery, and it is the shoulder axis that naturally links the throwing and non-throwing arms, underscoring the give-and-take that one limb can have on the other. One of the more common references to the non-throwing arm comes when a pitcher's front shoulder is “flying open,” which is scout-speak for a pitcher who triggers trunk rotation too early, indicated by a front shoulder that begins opening up as the shoulder-axis starts rotating.

The terminology makes a lot of sense when considering the visual point-of-view of batters and catchers, as a pitcher is supposed to keep the shoulder-axis closed until a shade after foot strike in order to properly align the rotational links in the kinetic chain and to maintain a balanced position on two feet. It bears repeating that a pitcher who initiates trunk rotation too early is akin to a batter who triggers his swing mid-stride, before the front foot hits the ground.

The glove arm is sometimes overlooked during the phase prior to foot strike, as the throwing arm separates from the glove and prepares for the rotation. The two arms play a role in maintaining balance, akin to someone spreading their arms on a balance beam or a tightrope, and at the National Pitching Association we found that the best pitchers had a common trend of positioning their arms in a mirror image of one another into foot strike. There are myriad ways for these players to extend their arms, but the best pitchers almost always form equal arm-angles in opposite directions. A glove arm that fails to mirror the throwing arm can impact balance and disrupt the overall consistency of motion.

The glove arm is a great example of player signature. Ideal coaching methods will support general rules that work across player types as opposed to strict instructions that dictate a particular arm path, and the method of mirroring the throwing arm has functional implications while preserving the player-specific nature of pitching a baseball. The path of the throwing arm is heavily determined by pitcher signature, making it extremely difficult to adjust in a manner that goes against the grain of the player's intrinsic motion. As coaches, if we had to fix the mirror, then we would always adjust the position of the glove-side arm, not with absolute rules, but rather based on what the pitcher's throwing arm was already doing. These guys are not robots, and we chose to preserve their uniqueness by optimizing their motion to take advantage of natural signature. 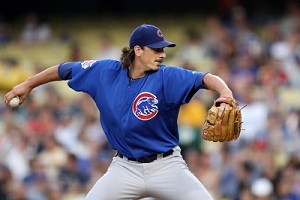 The signature element gives rise to several options as the pitcher approaches foot strike. There's the classic straight-line look demonstrated by Jeff Samardzija in the above photo. Below, Brad Ziegler appears to be anything but orthodox with his submarine delivery, and Chris Sale looks like a vulture with the high elbows and sharp angles, but each pitcher succeeds in mirroring his signature throwing arm with the glove side. 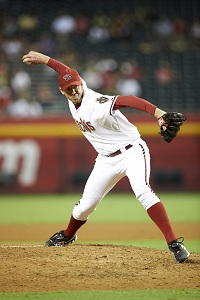 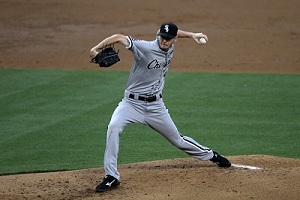 For contrast, we can look at a pitcher like Tommy Hanson, who points his mitt straight at the plate but crooks his arm as if he is aiming to shoot a bow and arrow. 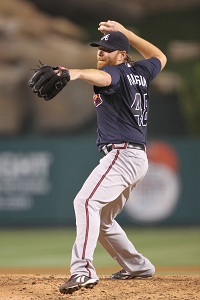 The glove side might as well be invisible once the throwing arm goes into the acceleration phase, but a good coach will have advice for a pitcher to use the glove arm to his advantage. One common instruction is to pull the glove to the hip, often using the paradigm of a boxer who pulls the non-throwing arm toward the body while the punch extends forward. The strategy makes sense in theory, but the problem is that fighters don't typically utilize this particular motion when throwing a punch, unless the pugilists in question are in fact Rock 'Em Sock 'Em Robots.

The greatest fighters will step into the punch with some forward momentum, and as the punching arm extends to its target the body continues to move forward. The other hand does not pull toward the body so much as the body tracks forward toward the glove, as the non-throwing hand stabilizes in front of the torso and over the front foot. It is deceiving to the eye, which is fooled by the relative motion of multiple moving parts, but the phenomenon becomes apparent when analyzed at a thousand frames per second.

The same is true for pitchers. The hurlers who achieve the greatest release-point extension with consistent timing are able to stabilize the glove into release point while tracking the body toward the plate, and pitchers with solid posture can maximize this extension. The players with the best technique have a glove that swivels with the palm facing the pitcher while the throwing arm launches into pitch release, with the mitt steadying itself above the pitcher's front foot. 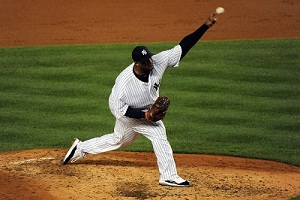 Some players have what I would call a “soft glove,” due to instability as the mitt drifts away from the body or hangs down low near the knees. Tyler Skaggs and Ernesto Frieri take the case one step further. with a “sloppy glove” that is more erratic and often associated with flailing limbs into release point.

While doing research for Arm Action, we investigated the motion analysis results of pitchers who stabilized the glove over the front foot versus those who pulled the glove to the hip, and though we were working with a restricted sample size, nearly all of the evidence supported the notion that a stable glove relates to the ability to track closer to the plate, extending release distance. The data also helps to emphasize the potential utility of f/x technology that tracks player movements. In-game measurements of pitcher mechanics would allow for experimental designs of such strategies, in addition to tracking player performance in a way that would quantify elements of fatigue as well as their progression throughout the season.

Most athletes who throw objects for a living take advantage of this strategy to keep the non-throwing hand out in front while the body continues its forward progression. The technique can be seen elsewhere on the diamond, such as in the picture below of elite shortstop Brendan Ryan, and NFL quarterbacks have used the strategy for years. Despite the absence of a mitt, some of the all-time great QB's stabilized the non-throwing hand in front of the body as they let go of the football, including the timeless Joe Montana and passing record-breaker Drew Brees. 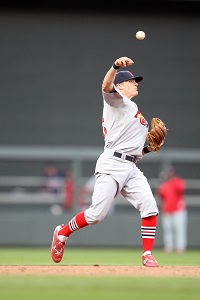 When choosing the grades for the mechanics report cards that have appeared in my articles throughout the year,, I decided to select the big six elements that I felt played the biggest role in pitch execution. There was no grade offered for glove position, because in a vacuum a poor glove is less of a travesty than faulty posture or poor torque, but it does play a role in some of the other grades. A pitcher with a solid glove position that allows him to track further to the plate will see a bump to his grade for release distance, whereas the pitcher whose glove flails wildly into release point will likely have a below-average grade for balance and/or timing. The smaller pieces add up when dissecting the entire pitching mechanics equation.

You need to be logged in to comment. Login or Subscribe
EricMeeker
Note to reader: All the links to Doug's previous articles should be read/re-read. It's terrific stuff and a lot to digest.
Reply to EricMeeker
tombores99
Many thanks for the tip of the cap, Ric! I'm glad that you have enjoyed the Raising Aces series.
Reply to tombores99
rwinter
My absolute favorite articles.
Reply to rwinter
tombores99
Thanks, rwinter! Your words are very much appreciated, and reader comments are my absolute favorite part of this gig.
Reply to tombores99
bornyank1
And here I was thinking it was that one time you got to be on Effectively Wild.
Reply to bornyank1
tombores99
... a close second
Reply to tombores99
timber
Doug, isn't there also a correlation between "soft" and "sloppy" glove and susceptibility to injury?
Reply to timber
tombores99
Maybe not a direct relationship, but the tendency for guys with poor gloves to also have poor balance, rough posture, and /or inconsistent timing adds to the injury equation.
Reply to tombores99
duck4169
I once heard Bobby Valentine say that he looked at the glove side to get an idea of whether a pitcher was tiring. He particularly thought some pitchers held the glove side lower as they tired.

Any thoughts on that?
Reply to duck4169
tombores99
There's definitely something to that, as that 1.5 pounds feels heavier as a pitcher tires, and in general he might have a tougher time lifting his arms if fatigued. Valentine was the manager when Tom House was the pitching coach in Texas, and he is certainly aware of much of the methodology. He may not have the most street cred right now, but I respect Bobby V's open-minded approach to baseball research and methodology.
Reply to tombores99
newsense
Doesn't pulling the glove toward the body with rotation help take advantage of angular momentum? Like a skater pulling her arms in when spinning?
Reply to newsense
tombores99
In theory, yes, but keep in mind that the shoulder axis is rotating less than 180 degrees (a half-revolution) and often closer to 100-degrees from start of trunk rotation to release point - a skater requires multiple revolutions before there is a noticeable impact on angular momentum. So though it might have a slight effect, in the specific situation for pitchers it is almost negligible. But if the Tazmanian devil took the mound, then he might benefit from keeping his arms close to the body - but I don't think that Taz would get past the balk rule.

Great question.
Reply to tombores99
DABanales
I would have never even thought to watch a player's glove path. Great article and I am finding things to watch for in a pitcher that I have always taken for granted.
Reply to DABanales