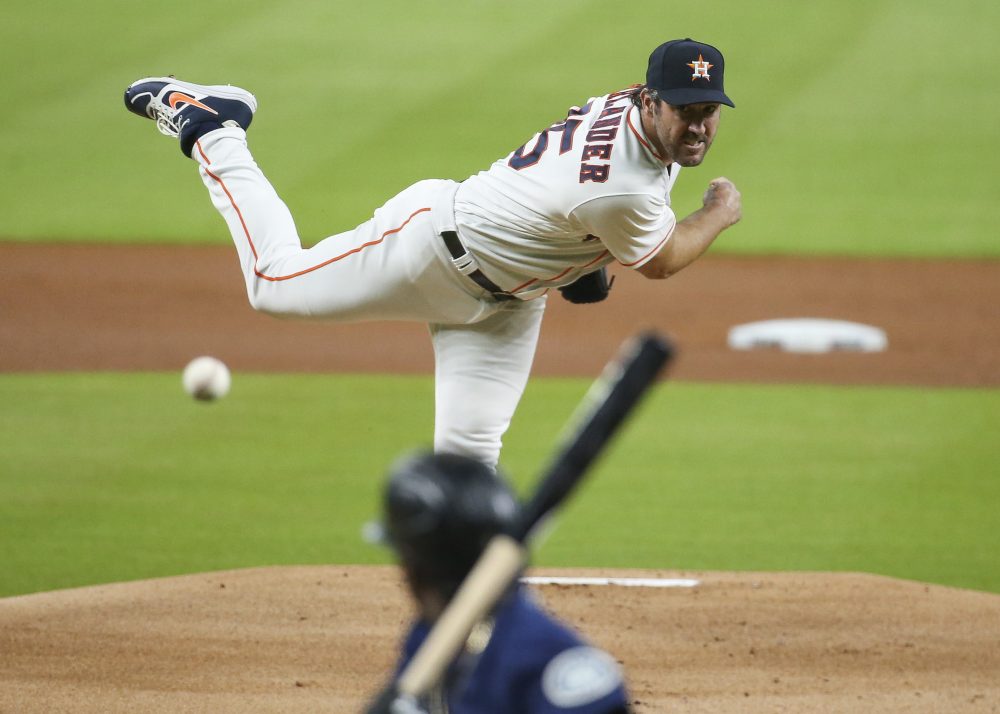 Correlation and causation, forever intertwined in a statistical embrace, destined to be confused for each other in perpetuity. Such has been their fate with the mythical Times Through the Order Penalty (TTOP). Correlation proved that seeing a pitcher for a second or third time made it easier for the hitter. Familiarity was given all the blame; exertion levels were largely ignored. It’s time to ask a hard question about the TTOP in order to illuminate a compelling alternative.

The concept of a TTOP dates back to Tom Tango in The Book. At the time The Book was written, there was no clear way to quantify pitcher exertion levels. Mitchel Lichtman laid this theory out in great detail in his 2013 exposé of the notion, pointing out that, “Essentially, the more times a batter faces a pitcher during a game, the better he does at the plate.”

The cracks in the armor began to show in 2016, when Russell Carleton expressed his doubts about the TTOP, with some rather #gorymath. Rob Arthur followed that up recently, arguing that times through the order is mostly fatigue. Arthur’s work took an important first step, pointing out that fastball velocity decline is likely the best explanation for the penalty. However, there are a few pieces that require some revision:

The Fourth Time Through Strongly Suggests It’s Not Familiarity

All numbers have been adjusted to account for the quality of the batter in the year in question, the home-away split, and the pitch type. This is key because the top of a batting order is better than the bottom. The data is split into two parts: contact quality, as measured by wOBA (for consistency with Lichtman’s work), and swings and misses (whiffs). All data are for starting pitchers only and exclude pinch hitters. It should be noted that the above pattern persists across affiliated ball, in domed or open stadia, every hour of the day, Sunday through Saturday, rain or shine, good pitchers and bad pitchers. (See Appendix A.) 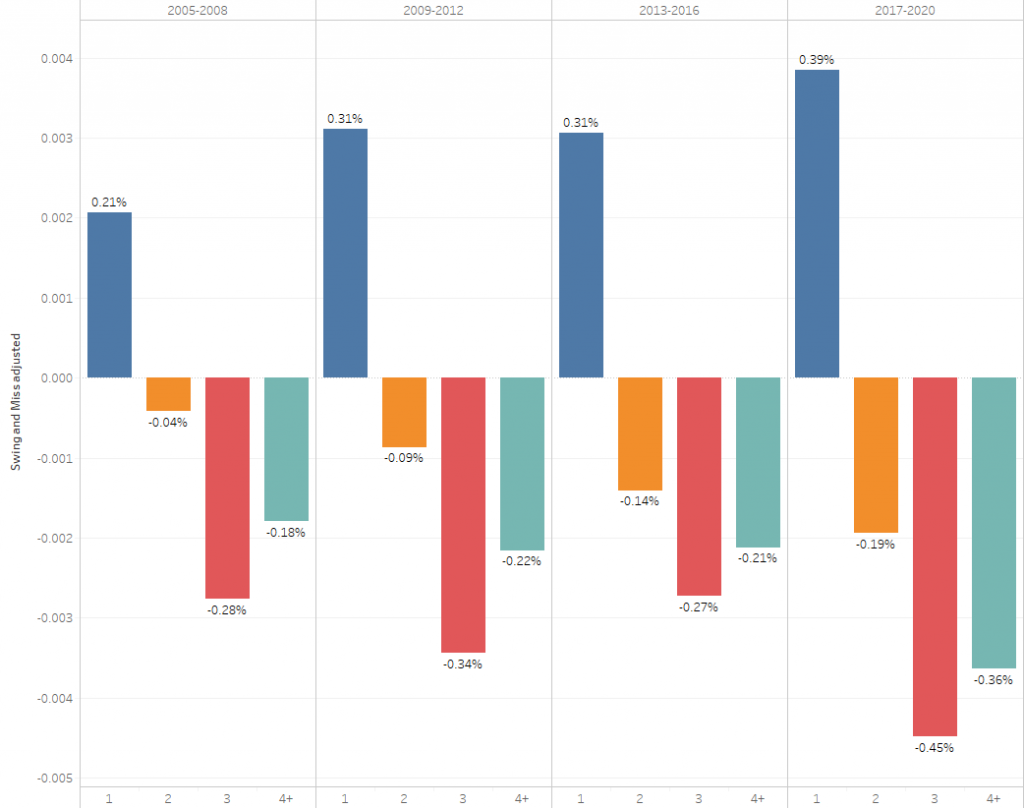 Here we don’t see quite as dramatic a shift as we did with contact, but the evidence is still quite clear: pitchers fare better the fourth time through than they do the third time through.

Exhibit C: Velocity Fluctuations Throughout the Game – The Key Factor

Pitchers vary their velocity quite a bit within innings and games. The following compares a pitcher’s per-pitch-type velocity with their average pitch-type velocity for that game. This is what the average starting pitcher looks like over the course of a game: It’s a fascinating curve, starting with a roughly nine-pitch ramp-up, followed by a steady decline until about 100 pitches, where the pitcher seems to get a second wind and throws progressively harder as he approaches the finish line. While it may seem counter-intuitive that a pitcher would see an uptick in velocity later in the game, this is likely a pacing strategy, much like what an 800m runner would employ.

This shape generally persists across all pitch types: The Link Between Relative Velocity and Contact Quality | R2 0.31

The importance of how much effort is put into each pitch is underscored by the relationship relative velocity has with contact quality. The following groups pitches by pitch number, then charts their outcomes to their relative average velocity. The ups and downs of a pitcher’s velocity within the game explain about 31 percent of the variability in contact-quality outcomes, after adjusting for pitch type, home/road split, and the quality of the batter that year.

This is even more compelling if you chart them across pitch numbers, where the graphs share the same shape. The Link Between Relative Velocity and Swing and Miss Rates | R2 0.44 The same analysis, when applied to swings and misses, suggests that the ups and downs of a pitcher’s velocity within the game explain about 44 percent of the variability in swing-and-miss outcomes.

As with contact quality, similarly shaped curves appear when charted together across pitch types. Putting it All Together

The Times Through The Order Penalty maps very closely to relative exertion levels, as measured by in-game velocity fluctuations. If you map incremental velocity to whiffs by times through the order you get this: And for wOBA, this: If anything, the fourth time through, when familiarity is at its theoretically highest point, provides relatively worse outcomes for the batter. You need to be logged in to comment. Login or Subscribe
zebodol
Congrats on figuring out that pitchers allowed to pitch the 4th time through the order are finishing up shutouts or 3-hitters with the best stuff/results that pitcher will have all year.

What else does this article prove?
Reply to zebodol
Cliff Mayo
That it's not just about ability, but stamina/endurance. If your ace pitcher isn't able to bring his regular level of heat for that 4th time, it doesn't matter if another pitcher (with all else equal but for higher stamina) would be allowed to go through the order again - your guy's cooked and needs a reliever.
Reply to Cliff
Mac Guyver
That is the kind of oversimplification that leads to poor analysis. I honestly don't understand your point - I think you agree with the author. If a player is not fatigued then he is still dominant, right? I think you are pointing out that every day, situation match-up is unique.
Reply to Mac
Jon Crate
One thing I've always thought was happening from first to third time through wasn't necessarily that the hitter gets familiar with the pitcher, but gets more familiar with the strike zone being called. Or rather a combination of the two. But the fourth time really changes things. As you say, if a pitcher is actually going through the order a fourth time, they are probably letting it all hang out because they have been pacing themselves and now realize they are nearing the end and don't have to. Would there be any correlating jump in spin rate on that fourth time through to show that a pitcher is putting more on his stuff, just like the velocity jump? Maybe that isn't even relevant and I'm asking a stupid question. I'm not a huge math guy and tend to let others figure it out and make a stat for it, ha.
Reply to Jon
Llarry
Thought experiment, or maybe it could actually be done in a summer college tournament, or minor league training camp or complex ball...

Set up a series of simultaneous parallel games. After each inning (or maybe 2), the pitcher, catcher (who is familiar with the pitcher's stuff today) and a dedicated pitching coach, move to the next game over. As we get to the later innings, there is no batter familiarity, only pitching exertion/fatigue in effect.
Reply to Llarry
Mac Guyver
I don't get this. The quality and fatigue of the pitcher is almost independent of everything else. It should not come as a big surprise that humans are unique. The quality of hitters and match-ups would make this meaningless.
Reply to Mac
newsense
One thing your analysis isn't clear about is the possibility of selection bias. Pitchers who make it to the fourth time through may be pitching particularly well that day. You need to look only at games when the pitcher made it through the order four times; it's not clear you did that.

There may also be a bias in that the manager allowed a pitcher to stay in the fourth time through if he's facing the bottom of the order. That shouldn't affect velocity but would affect wOBA, swinging strike%, exit velocity, etc. That could be fixed be looking only at appearances when the pitcher faces at least 36 batters (and ignoring batters past 36) but those appearances are rare and unlikely to be representative.
Reply to newsense
Mac Guyver
I would be surprised if a pitcher ever was facing the bottom of the order the fourth trip through. I think you are missing the fact that the fourth trip is going to be actually facing the best hitters for a fourth time.

The pitcher gains would not be from an uptick in stuff but the opposite. It would be more like they have great feel and have been setting up those hitters all day long - its the only way you get that far.

Correct me if I am wrong, but this is all about treating situations as unique as opposed to gross generalizations. This is more like a counterexample to a flawed theory... which disproves it.
Reply to Mac
brewerstt
I think the selection bias question is valid. I'm not sure I see something that eliminates the possibility that only the best pitchers and/or only power pitchers consistently get that far into the game. In fact it seems intuitive that fewer pitchers get to the fourth PA by allowing a lot of baserunners, and that when those guys who dragged down the third-time category are pulled what's left for the fourth confrontation is pitchers who are sailing along.
Reply to brewerstt
Cliff Mayo
So the better a pitcher's stamina, the higher their ceiling. If a guy (say, Blake Snell) is tiring out around pitch 100 and just doesn't have the ability to ramp it back up for that final push, he's done and should be taken out. If another guy (say, Max Scherzer) is around pitch 100 and hasn't yet given it his +1-2mph finishing effort, leave him in and let him carve up another inning's worth of batters.
Reply to Cliff
Mac Guyver
Thank you for pointing out some legit critiques with a flawed school of analysis. Fatigue is obviously a big part of diminishing effectiveness.
Reply to Mac
John Johnston
Outstanding article. Well done.
Reply to John
chrisweikel
I think I agree with the discovery but the complete dismissal of the tiny sample of 4th time through the order is a little shocking.
Reply to chrisweikel
callison6
I have been fascinated by a related issue: whether teams filled with players who are selective at at the plate and run long counts wear out starting pitchers sooner. In playing Out of the Park baseball, it's possible to take the first pitch, my high school JV coach's approach to baseball (plus none of us could hit). Whether taking that pitch ultimately hurts the hitter is. separate discussion. But my curiosity is whether that starter is worse off throwing his 100th pitch in the fifth inning, as opposed to the ninth. (Of course, most of the time, the guy in the former situation has been hit hard, while the latter guy is pitching a gem.). Intuitively, forcing a guy - particularly someone who struggles with control (this would not have worked on Greg Maddux) - to throw more pitches gets him out of the game sooner due to fatigue (this would not work well with teams having great bullpens full of hard-throwing middle relievers), I would think. The reverse of this approach would be those squads full of free swingers who gift three-pitch innings to the opposing starter. Thoughts?
Reply to callison6