Believe it or not, most of our writers didn't enter the world sporting an @baseballprospectus.com address; with a few exceptions, they started out somewhere else. In an effort to up your reading pleasure while tipping our caps to some of the most illuminating work being done elsewhere on the internet, we'll be yielding the stage once a week to the best and brightest baseball writers, researchers and thinkers from outside of the BP umbrella. If you'd like to nominate a guest contributor (including yourself), please drop us a line.

Alan Nathan is Professor Emeritus of Physics at the University of Illinois at Urbana-Champaign. After a long career doing collisions of subatomic particles, he now spends his time studying the collision of ash with cowhide. He maintains an oft-visited website devoted to all things related to the physics of baseball: go.illinois.edu/physicsofbaseball.

There’s nothing like a good climate-change discussion to get everyone riled up. Even Tim McCarver got into the act earlier this season, when he said on national television, “It has not been proven, but I think ultimately it will be proven that the air is thinner now, there have been climactic (sic) changes over the last 50 years in the world, and I think that's one of the reasons balls are carrying much better now than I remember.” With those remarks, the blogosphere immediately kicked into high gear.

A web search on the keywords “home+runs+climate+change” will yield many recent articles, blogs, and tweets. Some of the remarks were intelligent. Some were not. There were articles from people with diverse views on the subject, such as the Huffington Post, Scientific American, and Rush Limbaugh. I think everyone understands the qualitative argument. As temperature increases, air density decreases, so that fly balls carry farther and there are more home runs. But does the argument make sense quantitatively? That is the question I will address in this article.

My approach to quantifying the effect of temperature on home run production is to rely as much as possible on actual home run data. The data come from two sources. First, we have the precise landing location and hang time as well as the location and height of the nearest fence from Greg Rybarczyk of HitTracker fame. Second, we have the location of the ball-bat impact and the initial velocity vector (speed off bat, vertical launch angle, and spray angle) from Sportvision’s HITf/x data. For the 2009 and 2010 seasons, there are a total of 8803 home runs for which both HitTracker and HITf/x data exist and for which the gametime temperature is known.

Armed with the initial position and velocity, an aerodynamics model can be fine-tuned to reproduce the landing point and hang time of a home run, with the result being that the entire trajectory can be reconstructed to a high level of accuracy. The trajectory can be extrapolated to find the total distance the ball would have traveled had it eventually reached field level. Call this distance R, which is conventionally what people mean when they refer to a home run distance.

An important input to this calculation is the air density, which depends on both the elevation and the temperature, both of which are known. In particular, the game-time temperature for the collection of home runs in the data sample follows an approximately normal (Gaussian) distribution, with mean temperature 72.7F and standard deviation 10.2F and with temperatures ranging from a low of about 40F to a high of about 110F. The density also depends on the air pressure and relative humidity, but since these dependences are rather weak, they were ignored in the calculation.

We now ask the following question: For each of the home runs in the sample, what would have been the home run distance had the temperature been the mean temperature, 72.7F? That’s a very easy calculation to do. We simply use the initial conditions and aerodynamics model previously found, but with the air density being that appropriate to a temperature of 72.7F rather than the actual temperature. We calculate the full trajectory and the new home run distance. Call this distance R1, the distance the same batted baseball would have traveled in the same ballpark had the temperature been 72.7F.

We now have everything we need. For a given home run hit at game-time temperature T, the quantity R-R1 is the extra distance the ball travels at that temperature relative to how far it would have traveled had the temperature been 72.7F. The results are shown in the two figures below. 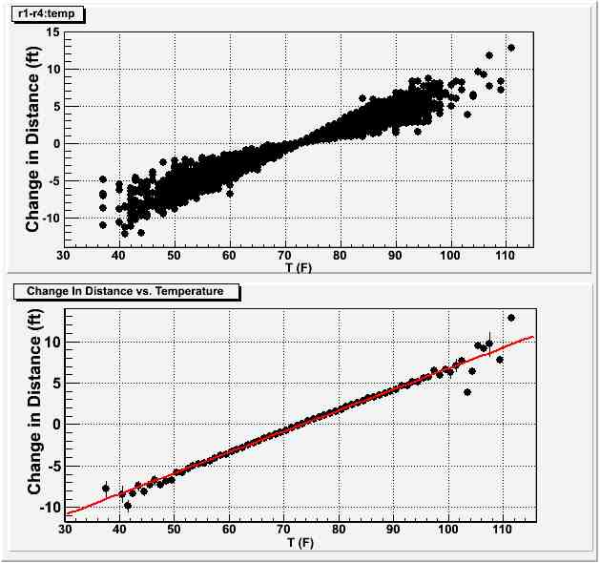 The top figure is a scatterplot showing R-R1 as a function of T for each of the 8803 home runs, where the temperature is grouped in 1F buckets. With some scatter about the mean values, the approximately linear relationship is easily discernable. Note that R-R1 is zero at T=72.7F, is positive for T>72.7F, and is negative if T<72.7F, exactly as we expect. The bottom plot shows the average value of R-R1 for each temperature bucket.

The data are amazingly linear over the full range of temperature. The red curve is a linear fit to the data with a slope of 0.25 ft/F, meaning that a change in T by 10F changes the home run distance by 2.5 ft. In his famous treatise The Physics of Baseball (3rd ed., p. 97), Professor Robert Adair finds that a 10F change in temperature corresponds to a 4 ft change in distance, somewhat larger than the present number. However, Adair’s estimate is remarkably good considering that he did not have the benefit of the extensive data that we now have.

Now let’s put it all together. Suppose the average MLB game-time temperature were 10F higher. Fly balls on a typical home run trajectory would travel about 2.5 ft farther (about 0.6%), leading to 6% more home runs. As a more dramatic example, consider games played at the two extreme temperatures of MLB, 30F and 110F. The home run probability would be about 50% greater at the high end (110F) than at the low end (30F). This result simply confirms what everyone already qualitatively knows: balls carry better at higher temperatures, leading to more home runs. The principal contribution made here is to quantify the effect of temperature on fly ball distance and home run production.

Now let’s see how our result fits into the global warming discussion. In an article appearing in a Washington Post blog following the McCarver remark, writer Jason Samenow shows a plot of the mean global temperature and the home runs/team/game, both plotted as a function of year dating from 1880 to the present. He talks about how the two curves appear to track roughly together—when temperature goes up, home runs go up, and so on—and remarks that they are eerily similar.

I won’t bother to reproduce the plot here, since it will take me longer than I want to get the appropriate permissions, but go to the link and see it for yourself. Nor will I comment on the extent to which the two curves track with each other. Again, look at the plot yourself and draw your own conclusions. Instead, let me focus on the period between 1980 and the present, during which the global temperature increased by about 1F while home runs/team/game increased by well over 30%. The analysis presented here is that an increase of average temperature by 1F would result in an increase in home runs by about 0.6%, a factor of over 50 below the actual increase. Clearly climate change cannot account for the dramatic increase in home runs since 1980. It can’t even come close!

In summary, I have verified that an elevated temperature does indeed lead to longer fly ball distances and more home runs, exactly as everyone expects. But more importantly, I have quantified the size of these effects with reasonable precision based on analysis of actual home run data. Finally, I have shown that the large increase in home runs over the past few decades is far greater than can be accounted for by a modest increase in global temperature. So, Tim, I’m sorry your idea does not hold up to careful scrutiny, but I thank you for throwing me a fat pitch right down the middle!

You need to be logged in to comment. Login or Subscribe
HonusCobb
"Finally, I have shown that the large increase in home runs over the past few decades is far greater than can be accounted for by a modest increase in global temperature."

Because MLB felt the home run became cheap, they changed a string a rules to favor pitchers rather than hitters. What impacted batting averages the most (and thus home run totals) was enlarging the strike zone. In addition to the rule change, mound height was not well regulated (specifically for the Dodgers in the Koufax/Drysdale years), gloves kept growing larger, and there was a lot more foul ground in most ballparks.

The rule change was certainly caused by anthropogenic factors, and I would suspect they have contributed to gradual warming of the temperatures as well.
Reply to HonusCobb
aaronbailey52
For the love of Bonds, turn off the lights when you leave the room!