Yesterday on the Twitters, word spread like wildfire of Baseball Boyfriends, a new CBS Fantasy Sports app that “is a single draftee fantasy sports mini game designed for girls. Pick your boyfriend for the season, dump him if he can't perform and pick up a new BBBF. Boyfriends [sic] earn you points daily. Girl with the most points at the end wins.”

I was disappointed to find out that men, gay or straight, did not seem to be welcome in this fantasy league.  Also, as the father of a very young girl, I was a more than a little concerned about the way that the stats are presented to women, as if they assume that the women who play their game can’t handle statistics that aren’t on crumpled notebook paper covered in hearts.  After all, there are women who play in my leagues, which tend to have a very stark presentation of the players and relevant stats, and these women regularly kick my ass. What a shame that the opportunity to pick a baseball boyfriend wasn’t afforded to me as well.

Nevertheless, even though I’m shut out of the game, I wanted to help those of you who might need some assistance in picking your baseball boyfriend.  Naturally, I went to the only place to get answers and relationship advice on the Web, Yahoo! Answers, to ask, “What makes a good boyfriend?”  The best answer, which was written by a woman named Cat, suggested that:

A good boyfriend is someone who is sweet, kind, gentle, and respectful. He knows his bondaries [sic]-and LOVES to push them but doesn't go so far as to break them. He is fairly good looking and fit. He can make you smile when you're feeling down. He always knows what to do. He makes sure you know how he feels about you. He doesn't cheat on you. He becomes your place of shelter, you can count on him to protect you and cuddle in his arms when things go awry. He gives you your space when you need it. He doesn't over-react, become overbearing or dominating. And best of all he constantly showers you with affection, but doesn't get to clingy.

OK.  To break down Cat’s answer slightly, we need to find someone nice and gentle, who likes to push boundaries but not break them.  He has to be good looking, decisive, and light-hearted.  He needs to be dependable and loyal, cuddly and affectionate, but not clingy.  Wow, that’s a lot.

Our first order of business should be to eliminate players who don’t fit the criteria.  It sounds like gentleness is important, so let’s cut out all the guys who hit for power (say, all the guys with 400 or more PAs who have an ISO below the .144 league average) or throw too hard (guys with more than 100 innings pitched whose average fastball is 91 mph or above).  That’s still a huge pool of players, 88 hitters and 73 pitchers.

Cat also mentions loyalty, so we should probably cut out players who have used Free Agency to leave their teams, so long as they weren’t cut.  Say good-bye to guys like Mark Buehrle, CJ Wilson, and Vlad Guerrero.  Good-bye too to that wannabe philanderer, Michael Young, who demanded a trade.  We also want to get rid of guys who are too clingy (sorry Tim Wakefield).  Carlos Zambrano’s clearly not reliable; he up and quit last year. That leaves 50 pitchers and 52 hitters.

She also wants guys who are “fit,” so I guess a lengthy injury history would scare women off.  That means no more Brandon McCarthy, Scott Baker, and Jake Peavy. Actually, that really kills our pitchers. We’re down to just 31. We still have 46 hitters, by my count.

The remaining players should probably be kind of good, since the ideal boyfriend “always knows what to do.” Let’s get rid of everyone worth less than 2.0 WARP.  Sorry, Derek Jeter, you only would have sent her home with a gift basket—not classy.  Ichiro is out of the running too.  My own personal choice, Ben Revere, drops out of the running as well.  Eight pitchers, and sixteen hitters remain.

It sounds like the perfect boyfriend can’t be too dominating either, so we should probably set some kind of upper performance limit.  Let’s see: no more than 3.0 WARP seems like a fair cutoff, so after trimming off Jered Weaver, Dan Haren, Starlin Castro, and others, we have just three pitchers and four hitters to choose from.

At this point, I was flummoxed.  We had gotten rid of all but seven players. I was almost out of criteria, except for the part about the player being good-looking. I’m not the best source on that; not being a scout, I have no idea how to judge who has “the good face.”  I turned to my wife and her single friends, who happened to have gathered in my living room tonight to complain about me. They were asked which which of the following Adonises they thought had the best face:

According to two out of three women currently in my house, Austin Jackson has the best face, and should be your Baseball Boyfriend should you join a league.  Now, I’m afraid I have no idea if you’re going to win or not. But really ladies, you shouldn’t care about that. As CBS Sports has seen fit to demonstrate to us, none of you are serious sports fans anyway. 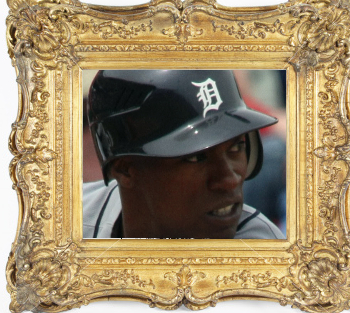 You need to be logged in to comment. Login or Subscribe
ObviouslyRob
Starlin Castro should have been out of the running early on for, at the very least, not being very gentlemanly. Even if he's innocent of assault, a gentleman would never have taken an intoxicated woman home, but rather escorted her back to her own.
Reply to ObviouslyRob
otisanderson
Austin Jackson would strike out.
Reply to otisanderson
gweedoh565
Awesome.
Reply to gweedoh565
Hibernaut
Hilariously, on the "Baseball Boyfriend" page, the sample dating history shows that Austin Jackson was the Designated Sweetheart for all of August, except apparently for a one-night stand with Daniel Hudson.
Reply to Hibernaut
mhmosher
Those righthanded pitchers will get ya everytime.
Reply to mhmosher
jnossal
It was only after reading Cat's description of the perfect boyfried that I realized I was lucky enough to have one.

He's my dog.
Reply to jnossal