The Tuesday Takeaway
Ben Lindbergh wrote on Monday that while “Toronto is still disappointing … the Dodgers are on their way to being about as good as expected.” Never was that more evident than in the middle match between those teams on Tuesday night.

The Blue Jays jumped out to a 2-0 lead in the bottom of the third inning, on an RBI double by Jose Reyes and a run-scoring single by Jose Bautista. The Dodgers charged back in the top of the third, on an RBI double by Andre Ethier and a run-scoring single by Mark Ellis. But the Blue Jays countered those equalizers with two more runs, on a homer by Mark DeRosa and a sacrifice fly by Brett Lawrie, in the ensuing half-inning.

It was all Toronto from there—or so it seemed, when the Jays tacked on one more in the fifth and responded to Jerry Hairston’s solo shot by plating three insurance tallies in the bottom of the sixth.

Brett Lawrie notched his first multi-hit game since May 27. The Blue Jays sent Chris Capuano off with five runs on his line after just 4 1/3 innings. They chased mop-up man Carlos Marmol five outs into his Dodgers debut, saddling him with four hits and three runs, two of which came on a Reyes homer. But the home club’s 8-3 lead would go the way of its 2-0 and 4-2 advantages earlier in the game.

Brett Cecil took over for Todd Redmond with two away in the top of the sixth and stranded Tim Federowicz in scoring position by fanning Nick Punto. In the top of the seventh, however, Cecil—who had been dominant over his first three months of relief duty—continued a recent string of meltdowns. Yasiel Puig singled. Adrian Gonzalez singled. Both of them advanced on a wild pitch. Hanley Ramirez walked. Andre Ethier walked, bringing Puig across home plate. And Mark Ellis singled to send home Gonzalez and Ramirez. Cecil then worked his way out of a bases-loaded jam, but 8-3 became 8-6, and that was only the beginning.

On came Darren Oliver, with John Gibbons eyeing the slew of left-handed hitters due to bat for the visitors. Carl Crawford singled. Puig walked. And Adrian Gonzalez brought both of them around with a three-run blast that put the Dodgers ahead, 9-8. Then, Andre Ethier delivered what proved to be a critical insurance run by taking Oliver deep two batters later. It was Ethier’s first home run off a left-handed pitcher since April 5, when he did yardwork against Jonathan Sanchez, who subsequently lost his job with the Pirates and is now pitching for the Dodgers’ Triple-A affiliate in Albuquerque.

Blue Jays color broadcaster, author, and former big-league pitcher Dirk Hayhurst summed up the team’s collapse with this tweet, which came in the wake of Oliver’s eighth-inning disaster:

Wow… There should be more funeral parlors sponsoring the Jays with the way the life gets sucked out of the Rogers Centre.

Gibbons’ squad rallied to halve the two-run deficit in the ninth inning, which Adam Lind started with a ground-rule double. Maicer Izturis drew a walk, and J.P. Arencibia singled Lind home, moving Emilio Bonifacio—who pinch-ran for Izturis—over to second. Unfortunately, Lawrie came up short in his bid to collect his second three-knock game of the season, flying out to left to cap off the 10-9 loss.

The Blue Jays are now 45-54, 7 ½ games behind the Yankees for fourth place in the American League East and 14 ½ games shy of the first-place Red Sox. They have lost as many games as the Twins and more games then the Cubs and Mets. And they are only 7 ½ games ahead of the 37-61 Marlins, whose roster they gutted in the Reyes/Josh Johnson/Mark Buehrle mega-deal last November.

Tuesday’s gut-wrenching loss came on the heels of a 14-5 rout on Monday, after which the Blue Jays felt compelled to hold a players-only meeting, their second of the season. For six innings, the narrative might have been that the get-together worked wonders. But the story, as Toronto Star beat writer Richard Griffin wrote, changed in the final three frames of the “exciting, but loosely pitched loss.”

General Manager Alex Anthopoulos embarked on an offseason spending spree, which included the blockbuster trade with the Marlins, the signing of Melky Cabrera, and the late-offseason acquisition of R.A. Dickey from the Mets. Now, six months removed from being an aggressive buyer, Anthopoulos might be forced into selling the short-term members of his roster that have retained their trade value through the dismal first 99 games.

In PECOTA’s eyes, Toronto now has no chance of coming back to win the East and only a minuscule shot of making a miraculous run at a wild card berth. Closer Casey Janssen, who has only one save to his name since June 22, told reporters, “we need to play good ball, and just see what we can make of this thing.” With less than $2 million left on his contract in 2013 and a buyout-less, $4 million club option for next year, he might be one of the first to go.

Tuesday’s Matchup in Review
Ben Zobrist’s career-long plight continued in game two of four between the Red Sox and Rays, as Jon Lester turned in his second zero-walk start since May 20. The left-hander worked 6 1/3 innings of two-run ball, permitting seven hits and fanning eight, and his manager, John Farrell, said after the game that it was “probably as powerful as he’s been all year.”

The Rays’ second baseman, who hit in the two-hole of Joe Maddon’s order, would probably concur. In his first plate appearance, Zobrist took a first-pitch fastball up and away, fouled a belt-high four-seamer off, and then flied out to right field on a changeup. He struck out swinging on a 92-mph fastball just off the outside corner in the third inning, the sixth pitch of an at-bat that featured five hard ones and a changeup. And in round three, Lester reversed his approach, starting with a knee-high changeup that Zobrist hit foul and then throwing three straight fastballs at 93, 94, and 95 mph, the last of which turned into another fly out to right.

Those radar-gun readings lent credence to Farrell’s assessment of an outing marred only by a couple of long balls, one in the second inning by Wil Myers and another in the sixth by Evan Longoria. Zobrist, on the other hand, went down looking against Junichi Tazawa in the eighth inning to wrap up an 0-for-4 evening with a couple of punchouts. He is now 9-for-48 with 18 strikeouts versus Lester.

Matchup of the Day
Say this for John Danks: Since coming off the disabled list in late May, the left-hander has fearlessly pounded the strike zone. Shoulder surgery to repair a torn capsule and rotator cuff, and to debride the biceps tendon, cost Danks a couple of ticks off his fastball, which averaged 91 mph in 2012 but has seldom broached 90 mph this year, but he continues to chuck it in there and force hitters to earn their stripes.

Unfortunately, when your hard stuff isn’t so hard, that strategy has drawbacks—namely, the prospect of serving up 14 homers in 69 2/3 innings, as Danks has done over his 11 starts this year. The 28-year-old’s ERA sits at 4.52 following a seven-inning, five-run loss to the Braves on July 19, and though his K:BB ratio is a robust 49-to-8, the 25 extra-base knocks on his line have overshadowed his stinginess with free passes.

Tigers leadoff man Austin Jackson, meanwhile, has seen his power numbers drop precipitously from last year, when he emerged as a premium catalyst by thumping 29 doubles, 10 triples, and 16 home runs. Jackson is on track to match his two-bagger total, with 15 to his credit so far in 2013, but he has notched only two triples and five homers, falling well behind his 2012 pace in those categories.

Detroit’s center fielder teed off on both left-handed and right-handed opponents’ fastballs last year, slugging over .530 on both four-seamers and sinkers. He is hitting .350 in the 60 at-bats that have ended with a sinker this year, but that comes with a .450 slugging percentage, and his four-seamer average is down to a mediocre .255.

Given his head-to-head track record against Danks, Jackson should be looking forward to this evening’s showdown. He is 10-for-25 lifetime versus the White Sox’ lefty, with a couple of doubles and a pair of homers, as well as four walks and five strikeouts. That comes out to a 1.203 OPS, the third-highest among active hitters who have faced Danks at least 25 times, trailing only Ian Kinsler (1.362) and Michael Cuddyer (1.334). 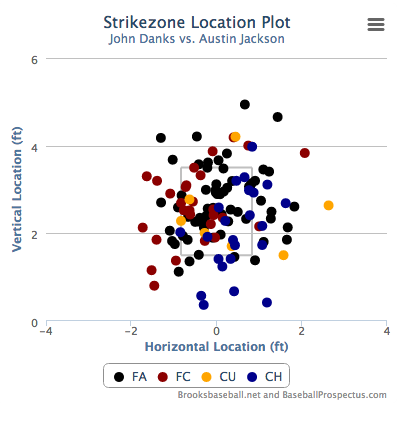 Even more worrisome for Danks is that, according to the data on the afore-linked matchup page, he retired Jackson in eight of their first nine meetings. Since then, Jackson is 9-for-16, including a double in their most recent encounter on May 14, 2012. Most of Jackson’s damage has been done on center-cut mistakes—like this eighth-pitch fastball, which he sent out of the park, and this changeup, which turned into the aforementioned double. Jackson has improved his plate discipline, but he remains willing to expand the zone downstairs and inside; the flipside is that, even with the decline in Jackson’s power numbers, pitchers can’t afford to leave anything down Main Street, a lesson that Danks has learned firsthand.

Early in his career, when Danks was most successful against Jackson, he used fastballs to begin at-bats, before turning to his changeup to induce weak contact or whiffs. These two sequences (one, two), back in 2010, are textbook examples of that approach. But at that point, Danks’ fastball sat at 92 mph and had a reach-back velocity of 94 mph, far above the numbers he can light up on the radar gun today. 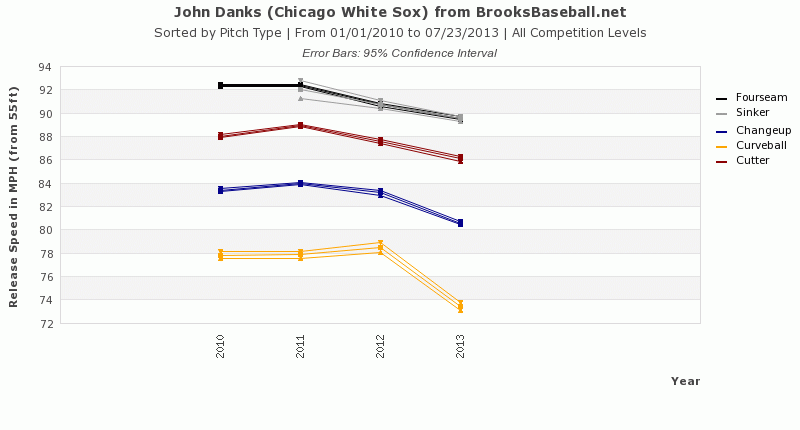 The good news is that Danks has largely maintained the differential between his fastball and changeup, even as the former has lost its peak zip. The bad news is that with his four-seamer missing fewer bats, he can no longer afford to miss his spots (8:10 p.m. ET).

You need to be logged in to comment. Login or Subscribe
BParlette
Richard Griffin is the beat writer for the Toronto Star, not the Sun.
Reply to BParlette
statsrath
Fixed. Thanks, Sam.
Reply to statsrath
adrock
I don't ever recall being present for a more soul-destroying experience than the 7th and 8th innings at the Skydome last night, and I was at Exhibition Stadium for game 7 in 1985.

Oddly, the near comeback lifted my spirits somewhat. The mix of achievement (3 or 4 baserunners off Jansen) and futility (losing anyway) somehow made me feel better.
Reply to adrock
nschneider
And then pile Wednesday nght's two-out, two-strike in the ninth unearned run blown save and tenth inning blowout on top of that.

Someone on twitter last night suggested this Blue Jays team as the worst in Toronto sports history, which is just absurdly ridiculous. But they're certainly among the most disappointing.
Reply to nschneider