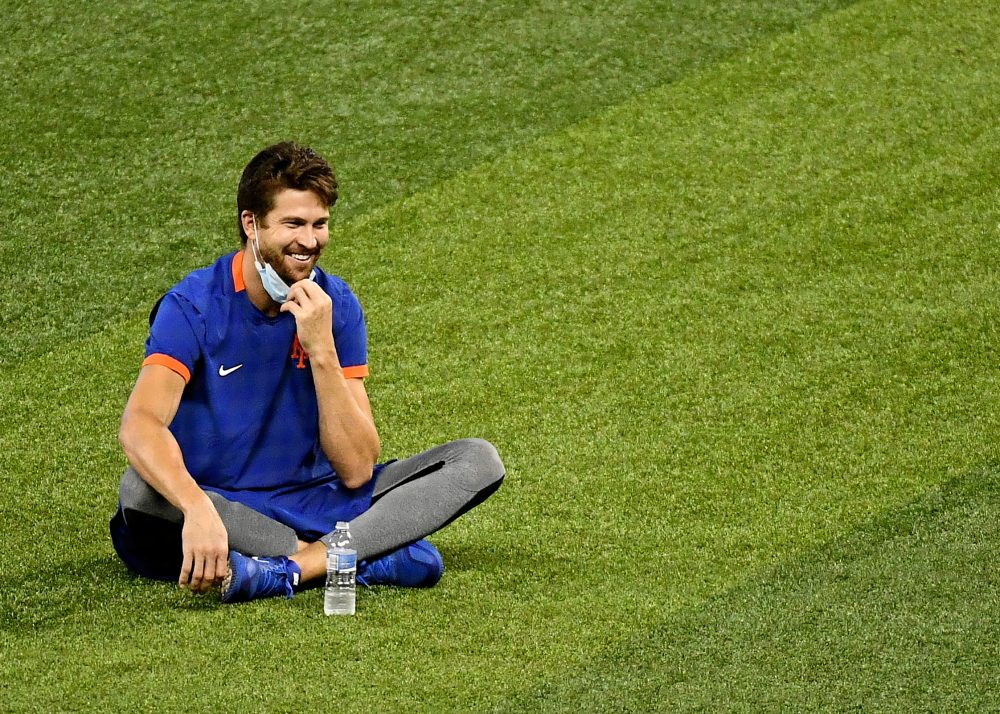 I suppose there’s something to be said for consistency, right? Last year, in the inaugural year of the Tout Wars Draft and Hold competition, I finished seventh with 86.5 points. This year, the following ensued (you can find the draft results here): 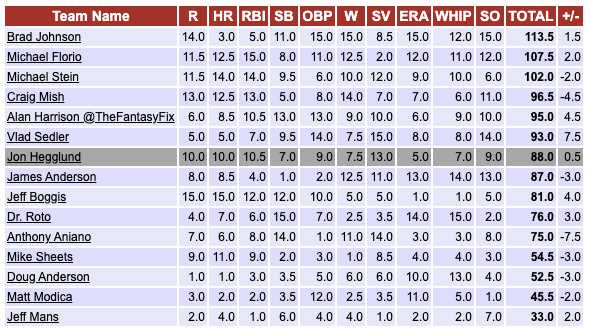 Seventh again, though with a 1.5 point gain in the standings. At this rate, I should be competitive for a title around the year 2095 or so? I will enjoy having a sandwich named after my disembodied, immortal mind uploaded to the AmazonLive4Ever™ servers sometime around 2040. Until then, all one can do is look back and analyze, with a sober eye, what went right and what, inevitably, went wrong.

Lest I become too predictable, at least I got to seventh place via a different path. In 2019, I scored at least 10 points in RBI, stolen bases, ERA, WHIP, and strikeouts. This year? Runs, homers, RBI, and saves. Last season, my strengths were speed and starting pitching. This season, I got the power and the relief pitching right. But my true Achilles heel proved as fragile as Mike Soroka’s (heal up soon, buddy!). With one notable exception, my starting pitching failed me.

I would like to blame all of this on the strange circumstances of 2020—particularly the stop-start training for pitchers, who had to ramp up quickly once the late-July start of the season was announced. If you look at a list of the starters I drafted, however, you could have foretold some trouble back in early March, when we still thought we were going to have a full season:

In hindsight, after deGrom I leaned quite heavily on a risky mix of older, injury-prone, and unproven pitchers. Of course, no one in February could have predicted Rodríguez’s harrowing COVID diagnosis and recovery back in the spring. Morton also seemed a safe bet to produce at ace levels for one more year, having consistently done it for three seasons prior to 2020.

But the peculiar circumstances of 2020—be it the virus, a too-quick ramp-up in the summer, or injuries that would have happened anyway—came for almost the entirety of my staff. There were weeks when the only starting pitchers not on the IL were deGrom and Turnbull. This left me piecing together a mix of semi-starters like Ross Stripling or middle relievers like Matt Strahm or Brusdar Graterol. Given these setbacks, it’s a minor miracle that I even got to the middle of the table in wins and strikeouts. However, it wasn’t nearly enough to make a serious run at the top three.

For all the misfortune that befell my staff, deGrom fully justified his first-round, fifth-overall pick. The Mets’ ace struck out 104 batters (tops in the National League) in a mere 68 innings, and he logged a 2.66 ERA, behind only Aaron Nola and Shane Bieber in the majors. Brad Johnson, the winner of the league, drafted in the six spot, right behind me. He took Gerrit Cole in the first round and Shane Bieber in the third. Even with his first two offensive picks offering very little (Yordan Álvarez, who played only two games, and Ketel Marte, who disappointed with a .732 OPS and only two homers), Johnson cruised to a league title on the strength of his two mega-aces.

On the hitting side, my first two picks, Starling Marte and Xander Bogaerts, performed just fine. Aside from a disappointing Marcus Semien (who fell to me outside the top 100), it was fairly smooth sailing. Luke, with his MLB-leading 22 home runs, propped me up in the power categories, while later picks like Ian Happ, Tommy La Stella, and Jason Heyward ensured a respectable OBP.

As always, in a 50-round draft-and-hold format, there will be the unexpected late-round all-stars, those who were drafted as afterthoughts but who turned out to be mainstays. On the offensive side, this was typified by two players for me: Jeimer Candelario, in the 35th round, and José Iglesias, in the 36tth. Candelario was a revelation, compiling a .297/.369/.503 slash line with seven homers for a forgotten Tigers team, while Iglesias logged an improbable .373/.400/.556 line in 150 plate appearances. Iglesias’s fellow Oriole, DJ Stewart (44th round!), was a late-season statistical espresso shot, putting up a .907 OPS in September.

To sum up, it was pretty simple: The pitching broke down, and the only thing keeping me from the bottom third of the standings was Jacob deGrom and a pretty well-rounded, if unspectacular, offense. I can’t wholly blame the long layoff and accelerated run-up to the season for my own lack of success, but there’s no question that, for many reasons, luck was the real winner of this year’s league. Just not mine.