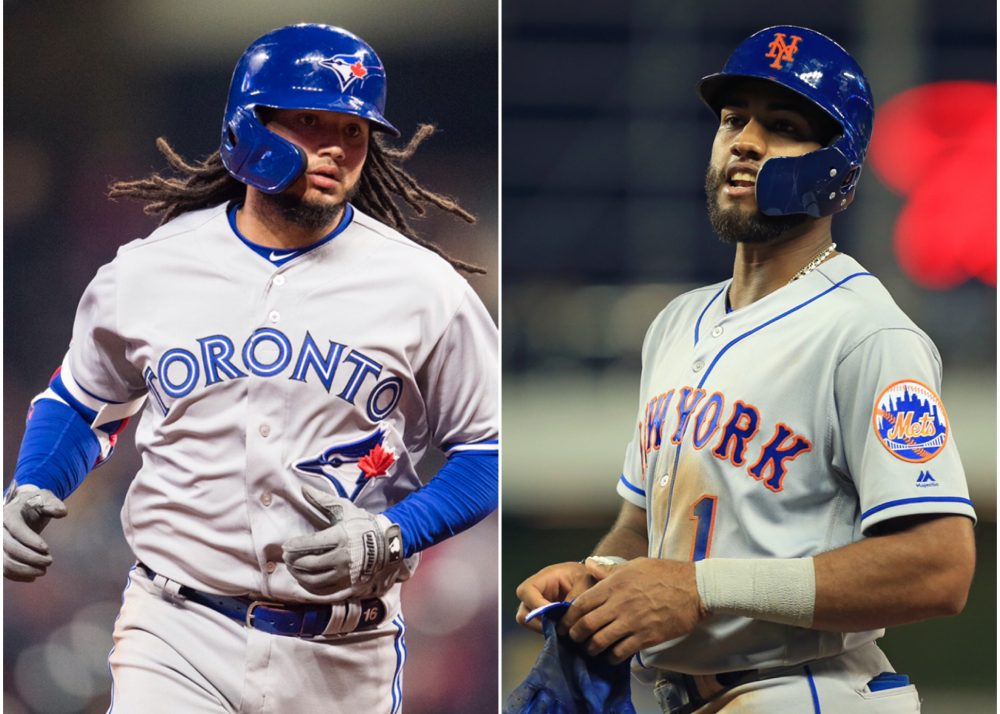 The draft-and-hold league is a beast like no other: once the draft is over (and, my god, 50 rounds!), the league can disappear into a black box. This is particularly strange in an industry league like the Tout Wars Draft and Hold, where one of the main purposes of the contest is to show our cards, to be a public-facing competition in which our good calls, our bad decisions, our successes and our failures are up for inspection, commentary and debate.

But in this setup, there’s no weekly FAAB to generate regular content, no prospect call-ups to pounce on, no trades to analyze. The limits of our world were drawn at the conclusion of the draft back in early-March. After the tweeting of picks and the analysis of projections subsides, there’s only the solitary work of 15 isolated people scattered across the continent, each glued to his monitor, laptop or smartphone, tracking standings and fiddling with roster configurations. The D&H format updates Joseph Conrad’s existential cri de coeur: “we live as we dream (and set our lineups)—alone…”

In an attempt to overcome this weird lack of interactivity, I will periodically report on the progress of the Draft and Hold league, vowing to not mysteriously “forget” to do this should my team sink to the depths of the standings. Speaking of which, here’s where we were before games began yesterday: 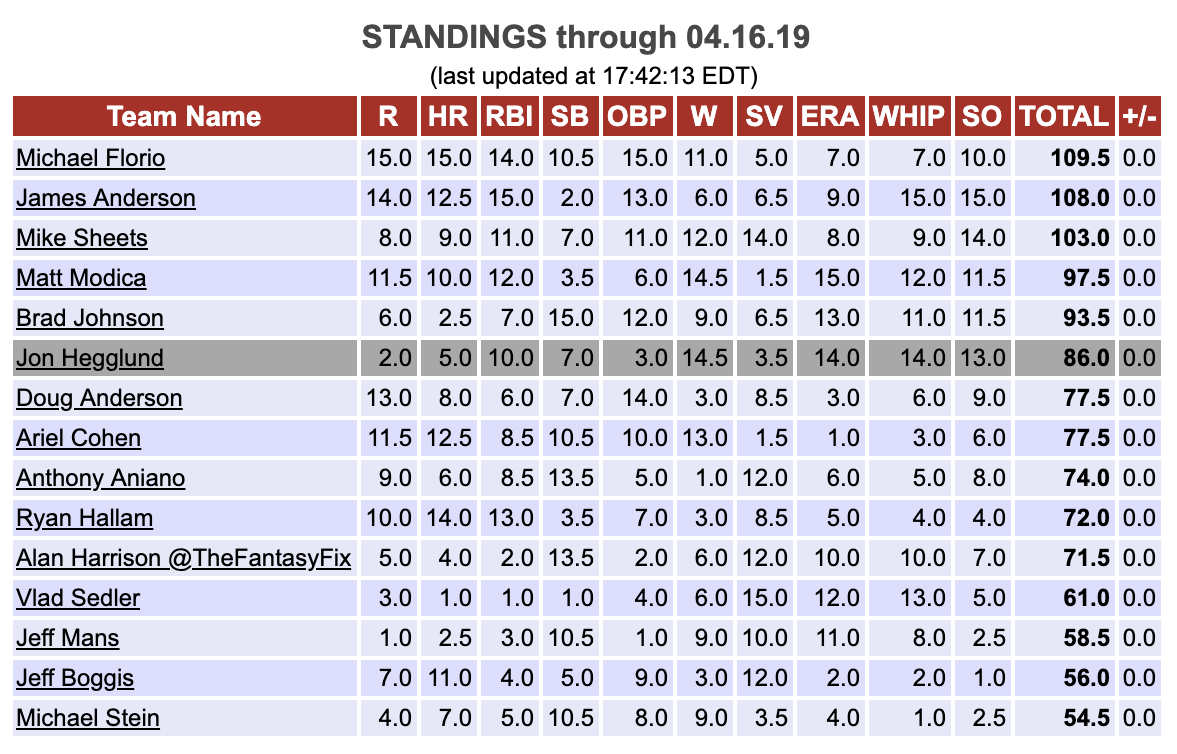 The bad news? I’m in sixth place! And after I clearly drafted the best team among this group (yes, your sarcasm detector just beeped). The good news, however, is that I’m not much, much lower than sixth, given that my top three bats—Jose Ramirez, Juan Soto and Yasiel Puig—have all been relatively dormant to start the season. Moreover, I’ve largely escaped the injury bug for any of my major players (one second while I rap furiously on every wood surface within arm’s reach). I expect better things from my hitters, so I should be relatively pleased with my current place. Nonetheless, as there is no relief to be found on the waiver wire or in trade talks, the entire burden of in-season play falls on setting one’s weekly lineup (as the title of Rob Silver’s regular column reminds us, in most roto formats, it is how one plays the “weekly game” that counts).

Whereas the D&H format gives us no external pool of players, the 50-man rosters offer a blessing and a curse. On a typical team, your bench will be small enough that your weekly lineups may present one or two difficult decisions but are largely easy to fill out—there might be some ambiguity around the margins, but your starters are generally your starters.

With a reserve crew of 27 players, however, the permutations multiply. I am feeling this blessing and curse acutely, as several players whom I only imagined as emergency options—Alex Gordon, Dan Vogelbach, Josh Phegley, Kolten Wong, Freddy Galvis, Clint Frazier, to name most of them—have come out bats a-blazin’, while many of my projected starters (including the aforementioned cornerstones) have been slower out of the blocks. What I want to do below, then, is to go through some of my more difficult decisions from the current week, pointing out some of the criteria that I’m using—especially in this uncertain, young moment of the season—to settle on who plays on Tout Team Hegglund, and who spends the week riding pine.

Decision #1: What to do with my underperforming stars?

This question is almost not worth inclusion, but I’ll quickly address it. I SHALL START THEM. The only way you’re not starting a hitter that you drafted in, say, the first eight rounds, is if there’s evidence of an injury or if a manager has indicated that the player will be sitting against same-handed pitching. Or, if he’s Yasiel Puig and he got suspended for fighting Pittsburgh. (Not just the Pirates. The entire city.) Ramirez and Puig have already validated this axiom: JoRam with a homer/two-steal game on Monday and Puig with two homers in his past two games.

I drafted Rosario to be my starting shortstop, and I drafted Freddy Galvis to be…largely forgotten, was my hope. But here’s Freddy, most definitely not dead, through Sunday’s games, slashing .351/.383/.684 with five homers already. Rosario has been productive enough, and I expect him to outpace Galvis over the course of the season. But (and here’s the irrational reasoning) I want to pack some of this hot streak into my season stats, lest I leave all of my good fortune on the table. Fortunately, there are two valid reasons to lean Galvis this week: he has a seven-game slate, versus Rosario’s six-gamer, and he’s now hitting in one of the top-two lineup slots, while Rosario typically hits seventh. Notice in the standings that the category I am most needy in is runs—so this breaks Freddy’s way. On the flip side, Rosario offers more stolen base potential—another category in which I need help—and the Met has already proven the point by nabbing a bag on Monday. Still, I’m hoping for a net gain with Galvis.

Weirdly (and, man, has it been a weird April), Gordon was the easiest call to make here. He’s hitting third in a not-terrible lineup, his strikeouts are way down, and he also benefits from a seven-game schedule in two friendly road venues (visiting the White Sox and Yankees). As Queen Elizabeth has demonstrated for the last 50 years or so, aging Royals can have a pretty gentle career decline, and Gordon seems to be no exception. Margot has worked his way into leadoff work most days in San Diego, and this appears to be the case against both righties and lefties. Again, needing runs, I see some benefit in playing him. Gardner was leading off for the first couple of weeks of the season, but his anemic bat has been moved lower in the order, and while Frazier was everyone’s belle of the ball last weekend, he has cooled off, and may be losing time to Mike Tauchman on occasion. While it seems counterintuitive to bench Yankees for a week at home, that’s just what I’m doing.

(This is a weird grouping, but with Shaw’s eligiblity at first base or second base, it comes down to two of these three.) It is impossible for me to be fully rational about Dan Vogelbach, but I will for a moment entertain the argument that the young masher has just had the two weeks of his lifetime, and we should be getting the off-brand Lucas Duda that we expected any day now. Perhaps, but in an OBP league such as this one, I’m happy with Vogelbach’s floor, particularly with a seven-day week populated entirely by right-handed opposing pitchers. Shaw has been a slow starter, but he slashed .253/.363/.502 at Miller Park last year, and I’m betting that a week at home powers up his limp-noodle bat a bit. Wong, conversely, had an insanely hot start but has cooled considerably of late. Even his three games in Milwaukee (where he torched the Brewers in the opening series, going 8-for-15 with two bombs) are not quite enough to move him past Shaw in my weekly confidence meter.

Finally, a pitching decision to round out this week’s deliberations. Mahle and Gray come in with two-start weeks, though risky ones at best: Mahle visits the Dodgers and Padres, while Gray begins with a San Diego turn before facing the Phillies at home. Even though I ranked both just outside 15-team consideration in this week’s Planner, it’s hard to leave two double-start options on the table. Between the two, I’ll lean Gray, even with the Coors start. For one, DRA counsels me that, well, Gray is a better pitcher than Mahle, even with the latter displaying some improvement this year. And, two, Mahle’s trip to Chavez Ravine to face a scorching Dodgers lineup is hardly less hazardous than a trip to the Mile High City. And, three, the forecast for Sunday in Denver is cool and wet, which gives me just enough nudge to feel OK with the Gray Wolf this week.

But what of Yarbrough and Strahm? Strahm has been better in his outings since his disastrous season debut at home versus the Diamondbacks. But the outings have looked shaky to me—two five-inning jobs with only six strikeouts in those 10 IP. Yarbrough will probably come in for a stint of two-to-four innings, but this will most likely be against the Orioles, and the Rays have been scoring early and often—meaning, no matter the inning count, Yarbrough sets up nicely for an easy win.

I’ve lifted the lid on some of my process for difficult lineup decisions in a draft-and-hold league—I can’t claim that I’ve been 100-percent rational, but if we’re being honest, nearly every “rational” decision—in fantasy baseball and in life—is flavored with a dash of raw intuition. Would we want it any other way?

You need to be logged in to comment. Login or Subscribe
Robert Thompson
I think you should reconsider Frazier-depending on if you are looking for power. I'm in a 50 rounder too and have decided to go with Frazier over Kingery. He seems to be playing regularly, more so than Margot. I really like this article-a great help!
Reply to Robert
Jon Hegglund
Thanks, Robert--yeah, I'm regretting the Frazier decision a bit.
Reply to Jon