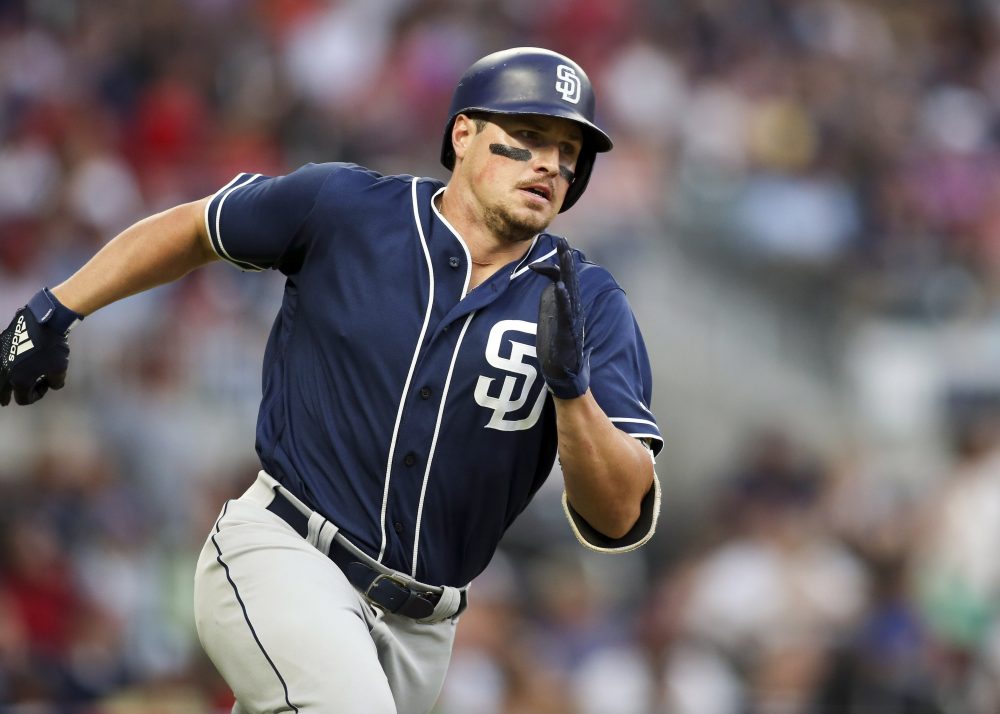 *extreme Jay Leno voice* Have you seen this? Have you heard about this (shout out timely references)?

In case you were living under a rock for this week, the stat wizards in the Baseball Prospectus lab cooked up another terrific metric, this time focusing on offense. You can read all about DRC+, its intricacies and functions HERE. It’s good stuff.

On the fantasy side, it’s a brave new world. Upon first hearing about DRC+, and initially combing through its various leaderboards, I’ll admit, my head was spinning. I was Charlie Bucket catching a glimpse of the chocolate river for the first time and I didn’t know what to devour first. Luckily, we have some help. Our pals Mike Gianella and Jon Hegglund tackled some of the fantasy implications surrounding DRC+ earlier this week, and we’ll be fully integrating the metric into our content for the 2019 season. One of the most fun and exciting aspects of fantasy (for me at least) is analyzing new information and figuring out how it translates best to your roster. We’re going to attempt to do that today, going category by category, picking out a few non-obvious (hopefully) names that could be big-time producers in their respective categories.

Let’s start with a game and song. Mookie Betts, J.D. Martinez, Mike Trout and Willians Astudillo. One of these things is not like the other. The rotund one hit a ton upon his call to the big leagues last year, producing a .316 “deserved” AVG, one spot below Betts, ranking second in the league. Sure, the sample was small (97 plate appearances), and the standard deviation is quite high, but Astudillo has a knack for contact, striking out at a hilariously low rate, hovering around three percent, and hitting line drives. It’s a particularly strong combination. Perhaps most importantly, he’ll hit while eligible to occupy that barren wasteland of a catcher spot in the lineup.

Travis Shaw starred in Jon’s “Shaw Rank Redemption” flick earlier this week, and there’s definitely a hope that the 28-year-old can pair a solid average with his 30-plus homer power stroke. And hope is a good thing, maybe the best of things, and no good thing ever dies.

After getting off to a scorching hot .325/.381/.596 start in his first two months in the Bronx, Gleyber Torres cooled off as the season progressed, battling both pitcher adjustments and nagging nicks and scrapes. Despite the struggles, Torres remained a productive player, launching nine dingers and swiping four bases in the second half. He also drew more walks while maintaining his 24 percent strikeout rate, which is just slightly higher than league-average. While a .271 average isn’t eye-popping, it may have not necessarily reflected his true talent, and his .279 dAVG, though incrementally better, bodes well for the future.

Coming into 2018, Hunter Renfroe was viewed as a dude that could pop a few long balls, but couldn’t really do anything else, making him an extremely volatile and largely forgettable fantasy option. However, after a DRC+ 10 percentage points better than league-average, perhaps it’s time to take a closer look at the former Mississippi State Bulldog. In 2017, Renfroe struck out. A lot. He was a little over nine strikeout runs above average, one of the league’s 30 worst hitters per the metric. With a strikeout rate nearing 30 percent, he was the epitome of a three-true outcome slugger—except that he didn’t walk much (so two true outcomes, I guess). This season, the 26-year-old improved in both areas, producing merely -2.7 strikeout runs above average and trimming around five percentage points from his strikeout rate. Baby steps.

Renfroe’s, let’s call it aggressive, approach at the plate in 2017 probably had the Padres wondering whether the outfielder fit into future plans. The slugger turned himself into a better hitter in 2018, and his DRC+ points to him maintaining his above average gains. As for the power, Renfroe’s tweaked approach was on full display in the second half, as he struck out less and hit 19 of his 26 homers in 229 plate appearances. The improved contact should lead to more confidence, which leads to more playing time, which leads to more dingers.

In one of the bigger bummers of the season, Jesse Winker was shut down in late-July before going under the knife to address a balky shoulder. The 25-year-old was hitting .442 in July. Here’s the thing, I don’t think Winker is going to hit .440 in 2019, although that would be quite amazing, and probably a record or something. I do, however, think that Winker has one of the better approaches at the plate and he’s a guy who should be on base, like, ALL THE TIME. Last year, Winker went down on strikes in fewer than 14 percent of his plate appearances, and he walked more than he struck out. He was over five BB runs better than average and over six strikeout runs better than average, both top marks had he logged enough plate appearances to qualify as a hitter.

While his .387 dOBP is a little down from his actual OBP of .405, Winker’s dOBP was still the 7th-highest in the league, tied with Bryce Harper. So, back to scoring runs. Provided that he returns to the lineup healthy (and most recent reports seem to think he’ll be ready for Opening Day), Winker should be hitting atop a sneaky potent lineup. Eugenio Suárez, Joey Votto and Scooter Gennett all range from 141 to 121 DRC+, all of whom will likely be hitting behind Winker. Factor in the emerging José Peraza and the soon-to-be-debuting Nick Senzel, and you get a super fun lineup in Cincinnati, and a lineup that should lead to huge run production for Winker.

If you go by wRC+, Jason Kipnis wasn’t very good in 2018. Despite basically a full season of reps, Kipnis slashed an ugly .230/.315/.389, and tumbled down the Cleveland batting order. While wRC+ pegged the 31-year-old as 11 percentage points worse than league-average, DRC+ has a rosier view. Kipnis walked a little more, drawing free passes at a 10 percent clip, his first double-digit walk rate since 2013. He also struck out less often, shaving a full percentage point from his swinging strike rate. The result is a less than stellar, but above average, 105 DRC+, and a deserved slash line of .254/.333/.419. If Kipnis’ spot in the lineup remains consistent (69 percent of his plate appearances came in the six spot or lower), he’ll have plenty of opportunities to drive in runs. As a team, the Indians carried a 109 DRC+, good for third in the league behind the Red Sox and Yankees. Kipnis drove in 75 runs last year with an OPS dangerously close to .700. If he can perform closer to his deserved numbers, Kipnis should be a strong RBI option from the keystone who won’t cost an arm and a leg.

After breaking out as the belle of the ball in 2017, it appeared as though Tommy Pham was turning back into a pumpkin after a .248/.331/.399 line in his first 396 plate appearances for the Cardinals. Even worse (for our purposes), he only nabbed 10 bags, a far cry from the 25 steals he tallied just a season ago. Then Pham got traded to the Rays, and he, um, hit better. In 174 trips to the plate, the 30-year-old slashed .343/.448/.622 and stole five bases in six tries. For the season, Pham was the eighth-most valuable player on the bases, producing 4.7 BRR, and the 31st-most valuable hitter, with 22.6 deserved runs above average. According to DRC, Pham benefited from some good fortune across the board, but a .353 dOBP is still considerably better than league-average, and a solid OBP in the hands of a dangerous base runner has the makings for fantasy gold. Fold in the fact that only Cleveland stole more bases than the Rays last season, and there’s definitely a world where Pham not only matches his 2017 output, but eclipses it, en route to entrenching himself as a legit stolen base asset.