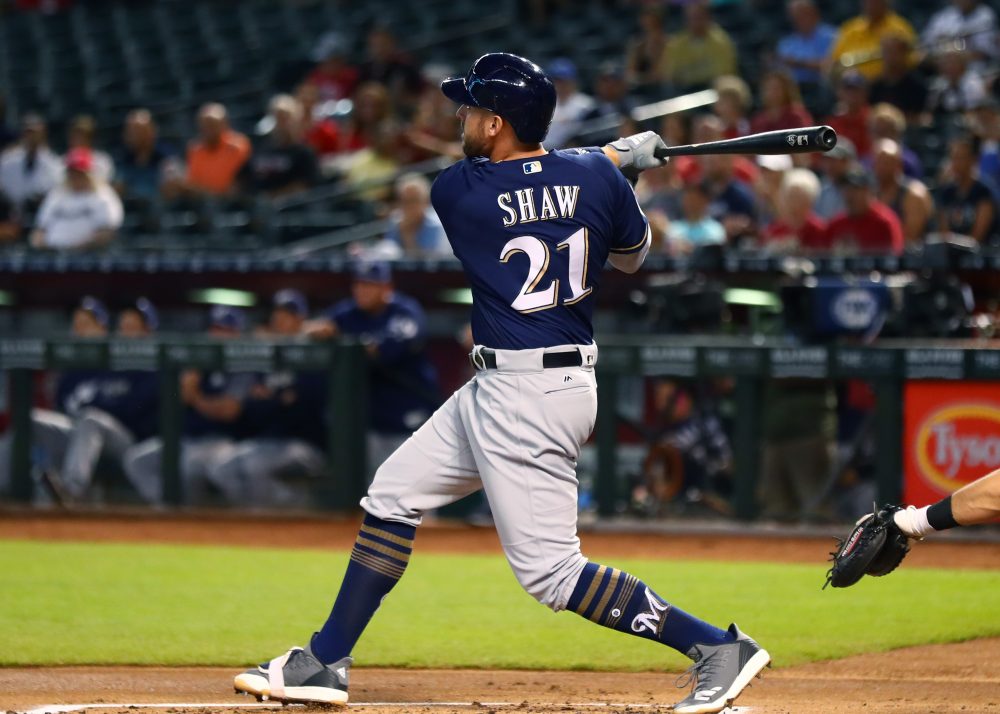 “Deserve’s got nothin’ to do with it”, grumbles Clint Eastwood’s Will Munny to Gene Hackman’s Little Bill as the latter lay protesting the justice of his imminent death in the 1992 film, Unforgiven. With apologies to Eastwood’s character, we at Baseball Prospectus respectfully disagree, at least when it comes to hitters’ contributions to their teams’ runs. With our new DRC+ metric, we claim that “deserve” has a great deal to do with finding the most descriptive, accurate, and predictive statistic possible. If you happen to be a black-hatted baddie in the frontier West, this is small consolation. If you happen to be, say, a free agent like D.J. LeMahieu (with a DRC+ of 105 versus a wRC+ of 86), this is happier news.

Numbers on their own don’t tell stories. The numbers offer a framework, like the skeleton of a house, around which we can construct something a little more cohesive and habitable. For the purposes of fantasy, we are always extrapolating numbers into narratives. The story you tell, for example, about Joey Votto’s power dropoff (Injury? Tinkering with his swing? Irreversible career decline?) will go a long way towards determining how you value Votto going into draft season. For what it’s worth, Votto logged a DRC+ of 135, telling us that his contributions were equivalent to those of Francisco Lindor, Khris Davis, Bryce Harper, Anthony Rendon and Paul Goldschmidt. In other words, DRC+ suggests that happier days are ahead for Votto.

In this spirit, I offer three DRC-inspired stories about three players, loosely imagined as adaptations of films (some of) you may know and love. DRC+ is not the conclusion to these stories—the conclusions are as yet unwritten—but something about the “what” of the DRC+ value of each player prompts a deeper digging into the “why” of their 2018 seasons and the “what’s next” of their future performances.

Logline: An unsung slugger breaks out of the prison of his perception as a merely “good” player, crawls through the narrow drainpipe of DRC metrics, and emerges into the cleansing rain of a top-20 DRC+ ranking.

No one would deny that Shaw has been a good piece for the Brewers, but when you start listing off the stars in that lineup, you’re more likely to think of Christian Yelich, Lorenzo Cain, the ascendant Jesus Aguilar, or even an aging Ryan Braun before you get to Shaw. Given the team-wide explosion of Brewers bats in 2018, you’d think that Shaw was another power-only bat whose weakness against left-handed pitching better suited him to a platoon role.

DRC+ invites you to take another look. Shaw shared a 132 DRC+ with Nelson Cruz, sitting one point ahead of Freddie Freeman. While this does not mean that you should be looking at these three hitters as comparable fantasy assets, it does mean that you should be looking more closely at Shaw as a candidate to improve in 2019. When you examine Shaw’s 2018 stat line, it begins to make more sense. Shaw improved his walk rate, cut his strikeouts, and suffered from a .242 BABIP, exactly 70 points lower than 2017. While wRC+ thought he was one percent worse this year, and the #55 hitter overall, DRC+ says he was 15 percent better in 2018, and tied with Cruz for the 20th-best hitter in baseball.

Admittedly, Shaw is a distinct liability against lefties (and when we get our hands on DRC platoon splits, we can see just how much), but his overall performance mitigates the platoon disadvantage. Even so, looking at the difference between actual and deserved triple-slash lines stats reveals that Shaw was particularly unlucky, especially when it came to batting average. The predictive value of DRC+ tells us that, should Shaw be basically the same player in 2019 as he was in 2018, we should expect an upward tick in all the triple-slash stats, with the most room for growth in batting average.

Logline: A promising young player seems to overcome the lack of discipline that has led to past heartbreak. But will DRC run values reveal this indiscipline as a fatal flaw, or has our hero earned a down-ballot MVP vote in our hearts?

DRC+ is not exactly sour on the Cubs’ young superstar—it still evaluates Baez as earning 15 percent more value than a league-average hitter—but when you look at this neighborhood, you begin to think that Baez’s case for MVP was a tad misplaced. Baez shares a 115 DRC+ with six other hitters (deep breath): Justin Upton, Yasmani Grandal, Shin-Soo Choo, Carlos Santana, Nick Markakis and Whit Merrifield. All very good hitters, but none in any serious MVP conversations.

So what is DRC+ seeing, or not seeing, in Baez? A look at the handy DRC+ Run Value tables shows us a thing or two. This table breaks out a hitter’s value, expressed as runs above average (or, with a negative number, below average) in each of the following result categories: singles, doubles, triples, homers, walks, strikeouts, HBP, in-play outs and bases reached on errors. Scanning this line, we see that Baez was a standout in home runs, with 18.1 deserved runs above average (not surprising, given that he deserves nearly full credit for the 34 long balls that he launched). But then (record scratch) we see two significantly negative numbers, -6.7 and -7.5, for walk and strikeout runs above average, respectively. Put in simpler terms, Baez’s inability to walk, and his propensity to strike out—essentially, his plate discipline—made him over 14 runs worse than the average position player in these play outcomes.

When Baez’s BB and SO runs above average are added, he ranks third-to-last in the league (behind only Chris Davis and Yoan Moncada), telling us that if Baez didn’t put the ball in play, he was one of the worst run-producers in either league. This will not be shocking to anyone, but it does indicate how much of a drag poor plate discipline can be on a player’s contribution to run creation. For fantasy purposes, it reminds us that Baez’s free-swinging ways puts a hard cap on otherwise elite production. By no means does it imply that Baez is a no-go in fantasy, but it should advise you to treat 2018 as a possible ceiling rather than a launching pad for future glory.

Logline: An indomitable will and powerful bat earn a newly-arrived teammate the respect of his pinstriped peers. But questions still linger: is this the real Luke? What can DRC+ standard deviations tell us about the true mettle of this young masher?

Boy howdy, did Voit do some barnstorming through the American League late last summer or what? In 161 PA (nearly all of them after he was traded to the Yankees), Voit cranked out the above numbers, along with an impressive 15 home runs. If we include all hitters with at least 50 PA, Voit grades out as fifth in DRC+, besting such beasts as Nolan Arenado, Manny Machado, and NL MVP Christian Yelich.

But wait, you say. You think DRC+ was crushing on Voit, but look over there at wRC+ making those heart-shaped eyes and doodling “wRC+ LV, 187” in its notebook over and over again. Remember, however, that stats like wRC+ and OPS+ are much more descriptive than predictive. Voit’s gaudy wRC+ number is not inconsistent with a fluky, small-sample hot streak; it’s basically summarizing this description numerically.

DRC+, however, is telling us that, yes, Voit was incredibly hot, and assuredly lucky, but he actually deserved quite a bit of that good fortune. There’s no way Voit (or any hitter outside of 2001 Barry Bonds, perhaps) would deserve this actual triple-slash line. But what he does earn is quite impressive in its own right, and gives us a reason to look closely at Voit going into the 2019 fantasy draft season.

You’re shaking your head at me. “How can I expect DRC+ to work with such a small sample?” For this reasonable objection, let me direct your attention to the “SD” column of the DRC+ v. Actual Stats table. The “SD” refers to “standard deviation”, here expressed as an error bar for the precision of the DRC+ number. In other words, Voit’s 154 can more accurately be described as a DRC+ in a range between 143 and 165. This is obviously a fairly large range, as is always the case with small samples. But, even so, the bottom edge of Voit’s contribution as a hitter—the bottom edge, mind you—was still 43 percent better than league-average.

DRC+ is not a magic number designed to solve the mysteries of the universe once and for all, nor is it directly translatable to fantasy value. Like all good metrics, it prompts more work, more research, more new stories to tell. For those who want pre-digested ranks and projections, this is probably a big “womp womp.” You didn’t want more homework! But for most of you—and let’s face it, you’re reading BP, so this is probably all of you—this is the non-denominational holiday gift that will keep on giving for months and years to come.

“Once upon a time there was a player with a DRC+ of 174. His name was Markus, but his friends—and soon enough his adversaries, too—called him Mookie . . .”

You need to be logged in to comment. Login or Subscribe
mjohnson27
I believe there needs to be clarification regarding the SD of DRC+. First, it would be helpful to know the type of distribution we are dealing with. Second, the way SD is applied to Voit in this article is misleading. Using the common definition of standard deviation for a normal distribution, a SD of 22 does not mean we are the true value lies within 11 points in either direction of a midpoint. This range given is a 38% confidence interval which is extremely low. This leads me believe the distribution may not be normal or else we could be dealing with extremely large ranges. For example, a more accurate 95% confidence interval for Voit is a DRC+ between 110 and 198.
Reply to mjohnson27
Jon Hegglund
That's helpful, thanks. I'm out over my skis when it comes to standard deviations. I do understand that the proper way to interpret SD in this specific context is 22 points *on either side* of the number. That makes more sense to me and was totally my error.
Reply to Jon