It is that wonderful time of year when fantasy baseball keeper and raise decisions are in the air. Many keys have been typed about keep, cut, and raise decisions, but today we will be discussing strategy around the opportunity cost of a raise dollar. Why? Because determining the best raise for a player is not simply an “Is player X going to be worth Y dollars for each of the next Z seasons?” decision. Every dollar we spend on a keeper is a dollar that we cannot spend in the auction. The value of a dollar in the auction will be different for each auction depending on inflation. Furthermore, the value of an inflation-adjusted dollar will be different for each owner depending on where his or her team lies on the fantasy win curve. Because we are all familiar with keeper inflation, we will be discussing the latter point.

The fantasy equivalent of the MLB win curve, the aptly named (by me) fantasy win curve denotes the value of an increase in the standings. Below is the fantasy win curve for a keeper league that pays out for first-, second-, third-, and fourth-place finishes, while minor-league draft order is determined by finish (fifth through 12th followed by fourth through first). Each league will have its own curve based on payouts and league structure, but the below is representative of a standard fantasy win curve for a keeper league (removing non-monetary factors, which do exist, but we will get to that later). 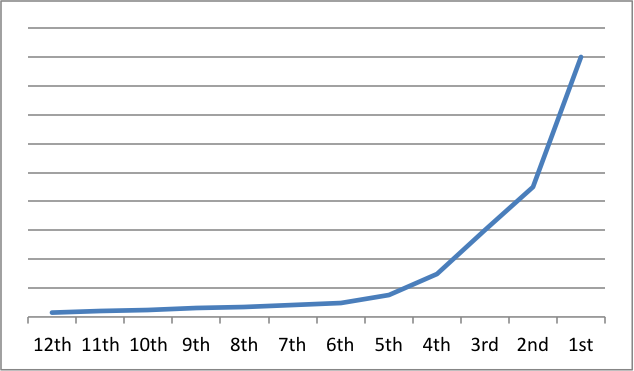 You own a $5 Josh Donaldson in a 10-team, AL-only keeper league with low inflation. The league has a traditional raise structure, meaning you can keep Donaldson next season at $5, the next two seasons at $10, the next three seasons at $15, etcetera. A four-year, $20-per-season contract is too risky for you, so that leaves you with the three previously listed options. For the sake of the example, let us say that you project that three years of Donaldson at $15 will return more value than two years of Donaldson at $10, which will return more value than one year of Donaldson at $5. So do you give him the three-year, $15/year contract and call it a day? No, you should not; let us go back to the fantasy win curve. The value of the extra auction money depends on your team’s competitive situation. To illustrate, an example within an example follows:

Sub-Example 1: Your team is a year away from competing for first place. Your team’s competitive window is 2015-2016.
Optimal Contract: Three years, $15/yr. The additional bid dollars resulting from a cheaper contract are less valuable than owning a $15 Donaldson throughout your competitive window.

Sub-Example 2: Your team is not the favorite to come in first, but it is one of the four teams with a legitimate chance to fly a flag in 2014. You have some older players and four of your best players’ contracts will expire after the 2014 season. Your competitive window is 2014 with an outside shot in 2015.
Optimal Contract: Two years, $10/yr. The additional bid dollars over the next two years increases your chances at a first place finish by enough that it becomes worth giving up a third year of Donaldson.

A fair question to ask here is, “Why not just keep Donaldson at $5 if your competitive window is really only 2014?” First off, great question. The reason why you should give Donaldson the $10 contract is because his trade value at two years, $10/yr is worth more than the extra five bid dollars (if the trade value is not worth it, then you should not do so, obviously). That said, if you find yourself in such a situation and another owner is willing to give you a more valuable short term piece for three years of Donaldson, then pull the trigger (such a perfect fit does not often exist though). Note that this is only an example; albeit, an example that hopefully illustrates the different factors that should be considered in a raise decision. When making your next raise decisions, make sure to take the following into account:

Digging a little deeper into the fantasy win curve (and getting away from raise decisions a little), it should be noted that each owner has her or his own personal win curve. Humans are motivated by non-monetary factors; thus, each owner’s non-monetary motivators will affect his or her personal win curve. You and most owners that you will come across can be described by one of the descriptions below:

First, I will not say that any of these strategies is correct. We play this game for personal enjoyment, and thus, your win curve will be shaped by how you enjoy the playing the game. I will say that if you are interested in having the best chances of winning, “monetary focused” gives you the best shot at accomplishing that goal. Make sure you are taking your win curve into account with your raise decisions no matter what that curve looks like. Lastly, be aware of the win curves of your fellow owners as this will determine who they are willing to deal and when. Unfortunately, I do not have a nice bow to tie on this one, but good luck with your raise decisions and make sure to take the fantasy win curve into account.

Based on my keeper list, I'm keeping the last three for their current salary since they're approximately even-valued, while my league's projected keeper inflation is around 33%. The first five I'm extending one year to 2015, figuring that I have a two-year window based on these players and other keepers (Jim Henderson at $3 in year 2 + some other guys).
Reply to swarmee
craneplace
Looks good. I'm not quite certain of your raise structure, but I'd extend Stanton for 2 years as that should increase his trade value to such an amount that is more valuable than the extra auction $$. Rizzo would also be tempting.
Reply to craneplace
spundin
Ellsbury for $20 in an 11 team league for this year and next good (Budget of $280)? Pitching stacked so no problem loading up in the auction on hitting with the most money to spend also with the likes of targeting Miguel Cabrera, Braun, Posey as my core 3 hitters. Already have for pitchers Wainwright (7), Gray, Salazar, Archer, Cashner, Kluber all $2.

One other question I have is if your league loses a team, how should that effect who you keep? I know it makes the talent easier to get with more players added to the pool which is why I was planning to cut any fringe or prospects I have and go after studs. I have guys like Eovaldi, Jorge De La Rosa, Martin Perez, Travis Wood @ $2 I can keep but feel I should cut them lose given the bigger talent pool I'll have to bid on with one less team.
Reply to spundin
swarmee
Yeah, in an 11-team Mixed league (14 hitters/9 pitchers), I wouldn't worry about Eovaldi (-$9), DLR (-$5), or Perez.
The PFM thinks that Travis Wood will be worth +$7 in your league, though. That's more than they project for Cashner ($2), Gray ($0), Kluber ($0), Archer (-$7), or Kluber (-$12). Perez with a projected 5+ ERA is not even in the minus $20 range.

Ellsbury I have no problem extending to $20. If you want him for more years than that, I probably wouldn't do it.
Reply to swarmee
spundin
Yeah I noticed the PFM projections already. Wood I have a hard time buying into him repeating last year. I'd rather keep the higher ceiling guys that are younger and room to improve even though they have the low PFM valuations.

I actually can keep Ellsbury for $20 for the next year even. Got him in the auction for $20 last year and they way its set up we can keep guys for 3 years without extending for same price.

If we extend for a 4th year, then in year's 3 & 4 (2015 & 2016) seasons his salary would increase.
Reply to spundin
craneplace
The biggest impact of losing a team will be how the shallower pool impacts inflation. It will also be important to see if your leaguemates are taking the change into account in their decision making. Lastly and obviously, replacement level production increases as a league gets shallower.
Reply to craneplace
sam19041
This is a cogent argument and very well written.
Reply to sam19041
craneplace
Thanks!
Reply to craneplace
brucegilsen
I liked it too! I enjoy the fantasy columns but to be honest most don't help me in fantasy because I'm in a old school 4x4 (BA, HR, RBI, SB, W, S, ERA, ratio) 12 team NL only keeper league with 10 pitchers, 14 hitters, and $270 entering our 26th year.

But the tradeoff between having an extra $5 to spend versus having a better trade chit to trade to dumpers is really important. It matters at each threshold, but it matters most when considering extending one year (Donaldson from 1 year / $5 to 2 years / $10 in your example) because you're deciding between future value and no future value. Since my league always has multiple dumpers, deciding which guys they will value is crucial.
Reply to brucegilsen
craneplace
Thanks! Good point on league norms, we should be taking them into account too.
Reply to craneplace