Jason Parks and his crew of experts have thus far done yeoman’s work in their prospect rankings this offseason. But Parks et al’s analysis, while excellent, barely scratches the surface of what's going on in the Arizona Fall League. This article will take you beyond the baseball diamond to scout the talent across the Valley of the Sun, from the scouts to the fans to the lurking Card Guys to paint a full picture of the Arizona Fall League experience.

Living as I do in the People’s Republic of Oakland, this scene never ceases to surprise me: dudes (and it’s always dudes) walk around with sidearms. Travis (maybe his real name, but probably not, although he did look like a Travis) was ahead of us in line at the Circle K with a holstered Glock holding up his sweatpants.

I have a wide (small-L) libertarian streak, so I don’t presume to be qualified to decide who gets to have a gun and who doesn’t. However, when I see a guy who looks like he spent his entire youth getting his lunch money stolen packing a gun that could absolutely, positively kill every MF’er in the convenience store, it freaks me out. Not a little. A lot.

The takeaway: Any pasty nerd in Arizona might have a pistol in his glove compartment, so proceed accordingly.

Here’s another cultural difference between Oakland and Arizona: not everyone in Arizona is tattooed. I occasionally forget and find myself wondering why everyone in Sky Harbor Airport is staring at me. Oh, right! They’re not used to seeing people with lots of tattoos. That’s changing, of course, but it’s still a bit of a shock, both for them and for me.

Takana, though, had decided that she is joining the ranks of the tattooed. She talked ad nauseam about her plans for future tattoos as well as the three tattoos she recently got in a single sitting. Not even I’m that dedicated.

One of them was a tribute to her dad, who was a drummer. The tattoo looked a lot like this: 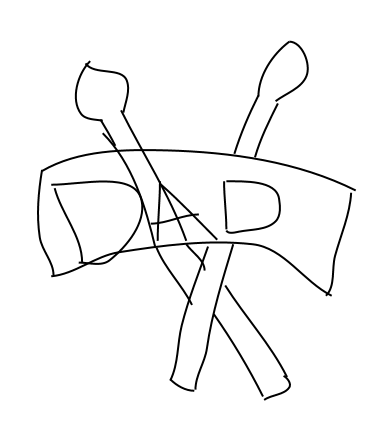 But what can one say in this situation? She’s going to have this turd on her for the rest of her natural life, and I don’t want to make her feel even worse about it. I did my best to assure her that it wasn’t all that bad, and that the wavy lines meant to signify drumsticks did just that, and didn’t resemble weirdly elongated male members in any way. Then I picked up our room keys and ran like hell.

You know who Voros is. He’s one of the guys who rewrote the book on baseball. (Not “The Book,” but “the book.” Anyway.)

Through the miracle of twitter, we learned that Voros and a buddy of his were at the Friday night game at Salt River. (Best baseball facility I’ve ever set foot in, by the way — if you ever find yourself in Arizona for spring training or the AFL, you HAVE to see a game there. It’s amazing.)

We moved down from the scout’s section to hang out with Voros and friend. As much as I enjoyed Jeff Passan’s Sabermetrician in Exile piece on Voros, the picture it painted bore no resemblance to the man I hung out with. McCracken was funny, insightful, and forthcoming. We had a blast talking baseball, Valley politics, and punk rock. Well, I did, at least; I won’t presume to speak for him. I can only hope that you have the pleasure of watching a game in this man’s company someday.

Susan is one of those phenomena that can’t really be explained; you just need to experience her for yourself. And through the miracle of smartphones and internets, you can do exactly that—without having to travel to the land of Pistols and Proof of Citizenship.

That’s Susan. She’s at every single D-backs home game, from batting practice until the last out, shouting a string of unintelligible … whatever she’s shouting. Howbout that voice, though, huh? She may have missed her calling as a hardcore singer. She’d probably shout Scott Radinsky right under the table.

Bob Gebhard, Dbacks VP/assistant GM, told us she would routinely bake cookies and brownies for the players, and Konrad Schmidt, erstwhile Diamondback, confirmed that he never witnessed anyone eat any of these items. No one wanted to get roofied.

If you’ve ever watched more than a couple of minutes of a Diamondbacks broadcast, you’ve probably seen Flag Lady. She’s at every home game, in the upper deck, dancing and whipping her flags around.

We saw Cindy at just one of the four games we attended; a Saturday afternoon contest between the Salt River Rafters and the Phoenix Desert Dogs. She didn’t have a bespoke flag for every Arizona farmhand as she does for the big-leaguers, but she did twirl a different one for each Arizona player and had a special one for Rafters skipper Matt Williams.

Voros told us an interesting story about Cindy.* He’d interviewed her once, and she told him that she had always loved baseball, but her domineering husband wouldn’t let her attend games. She eventually divorced him, and has been trying to make up for lost time ever since. She sits in a sparsely inhabited section of the upper deck so as not to distract or annoy her fellow fans. You probably don’t want to have dinner with her, but she seems like a pretty okay broad.

I like to pretend that Cindy and Susan are sworn enemies. They were both in attendance at the Saturday game, and neither seemed to acknowledge the other. Maybe they really hate each other, or maybe I’m just projecting. But in my mind, they’re like Maggie Simpson and Gerald Samson.

*If any of these facts is wrong, assume it is my error in the retelling, and not Mr. McCracken’s.

Baseball cards are cool, and I have nothing against them or the people who collect them. But there’s a certain subset of card collectors that I find unsavory. They hang around minor-league ballparks with binders full of baseball cards and pounce on unsuspecting players and former players to get them to sign their cards.

The players almost always end up signing, but they seem to do so begrudgingly. I don’t get the fascination with autographs—never have—and I assume these guys only want the autographs in order to increase the value of the cards. Simple capitalism, I guess, but it just seems a little gauche.

Weirdest Card Guy moment of the week was when one of these guys came into the scout section, walked right past Pete Vukovich, and handed a stack of a dozen cards to Dave Engle to sign. Dave Engle!

On Friday night I watched a Card Guy walk up to a scout with a sheaf of baseball cards. There was a short exchange and the Card Guy walked away without any cards being signed. When I saw the scout at the game the following day, I asked him which pro ballplayer the Card Guy had mistaken him for. The scout said the Card Guy thought that he (the scout) was a current AFL player who was charting. The scout in question was Bobby Basham, who is 32 and could probably pass for the dad of any of the AFL players.

These days Basham is the coordinator of major-league scouting for the Cubs. But once upon a time, Basham was one of the most promising pitching prospects in the game. Get a load of those 2002 stats. Those are unholy. According to this story, he had a string of 13 starts in which he struck out 97 while walking only nine. And yet we already know Basham never made the majors. So what the hell happened?

According to the 2006 BP Annual, Basham tore his labrum in 2003 and continued to pitch. He underwent surgery in 2004, but was ineffective, never making it past Double-A. He hung ‘em up in 2007 after posting an ERA above 16 in seven appearances.

I wonder if that Card Guy really did have a Bobby Basham card. If I were Bobby, I probably wouldn’t want to be reminded of what could have been either.

Whenever you get more than four or five scouts together, an Alpha scout emerges. Determining the Alpha is a complicated calculus, involving age, experience, personality, and importance within the scout hierarchy.

Ed Lynch was the Alpha scout at a number of the games we attended last week. As such, it was his job to determine who I was. Bob Gebhard and Pete Vukovich had scrutinized me similarly at other games.

“Are you the new guy with the Astros?” he asked me.

“Whoa, this guy thinks I’m an actual pro scout!” I thought to myself, but luckily didn’t say out loud, “even though I’m wearing cutoff jean shorts and sitting with my wife!”

“Nah,” I answered, out loud this time, trying to play it cool. “I work with Baseball Prospectus. Not affiliated with a team.”

I’m still trying to figure out why he thought I might be working for the Astros. Maybe I just look like someone Kevin Goldstein might hire.

A few minutes later Ed asked me if “you guys at BP” kept a certain arcane statistic that he’d had trouble tracking down. This surprised me for a number of reasons:

As the game wore on, I learned that Ed’s appetite for knowledge was basically insatiable. If he wasn’t talking to fellow Blue Jays scout Ryan Mittleman about something happening on the field or talking college football, he was on his phone looking up stats for Ron Duguay or something equally esoteric. He’d ask Ryan or another scout where they liked to stay in a particular town or which college campus was their favorite to visit.

And of course there were the baseball stories. Most seemed to center around how much he hated pitching at Candlestick. His recall for names, dates, and places was uncanny. I was crushed when the game finally ended, not because it was especially good (it was, in fact, terrible: the home team committed seven errors and lost), but because Ed Lynch storytime was over.

You need to be logged in to comment. Login or Subscribe
KerryHofmeister
Pleasure to read.
Reply to KerryHofmeister
Daddyboy
Nice...makes me want to make the trip.
Reply to Daddyboy
jimcal
Ian, when is your version of Bang! (board game reference) coming out? I cannot wait to play these characters on Thanksgiving table (speaks much to my foreign personality and respect to Thanksgiving, huh?)

No, I am not joking.

Best,
Jim from Seattle
Reply to jimcal
perhaps
I still have terrible memories of the Ed Lynch era. But I'm glad to see the Redemption of Ed Lynch has left him in a much better place. For as much damage as he may have done to the Cubs, they -- as they always do -- reciprocate in equal measure.
Reply to perhaps
delorean
Yep. Being smart and funny and charming isn't enough to make a great (or even good) GM, I guess. In fact, maybe those things -- or at least the being nice part -- actually worked against him. Pure speculation, of course.
Reply to delorean
stockmaj
What was the stat?

Reply to stockmaj
Vicmill1
I love going vicariously on your shoulder as you and your wife sail on these voyages of discovery. I get all the fun and insights without the airports and the pistol-packing lard-boys and embarrassing body art victims.