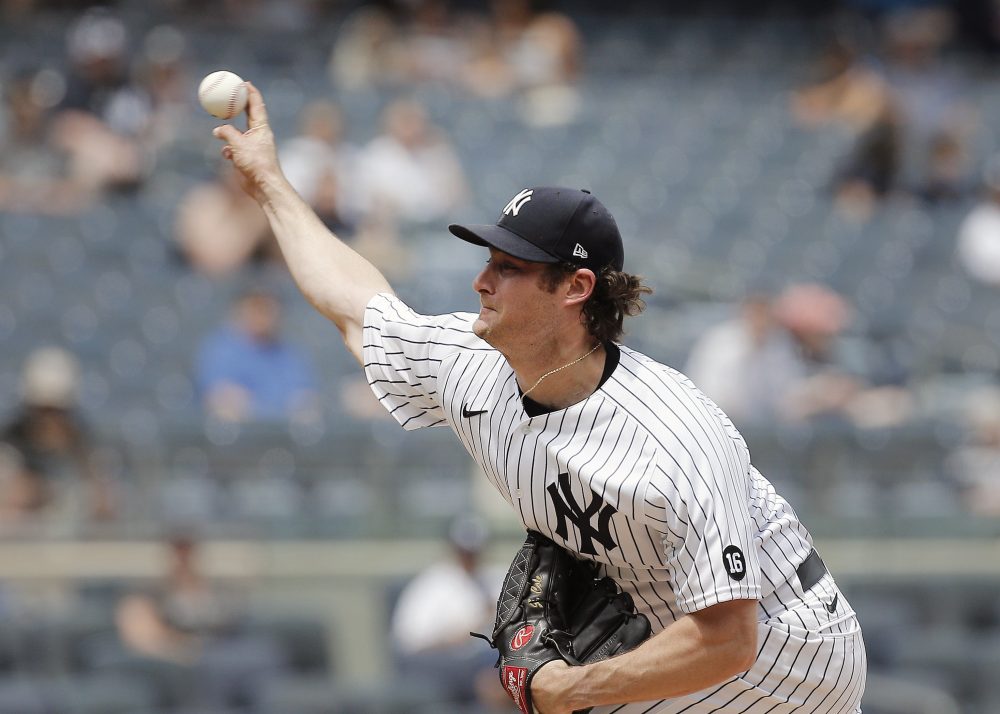 MLB is threatening to crack down on pitchers’ use of materials that, in addition to making the baseball easier to grip, also make the baseball easier to spin. Pitches that spin more also move more dramatically and are harder to hit. With offense in short supply, and pitchers increasingly able to micromanage the design of their pitches, MLB has decided it is time to limit pitchers to the use of rosin, an approved substance which offers less pitch-design potential.

In light of MLB’s announcement, some observers have noticed declines in measured spin, as measured by MLB’s Hawkeye pitch tracking system. When a pitcher’s average spin in a June game has been lower than the pitcher’s seasonal average, some viewers have concluded that the pitcher in question (1) was probably using a forbidden grip substance, and (2) is suffering the consequences of removing it.

As our Rob Arthur has explained, though, this is a complicated issue. Spin is positively correlated with velocity, which can vary between appearances for various reasons. Different pitch types have different desired spin profiles. And even if we account for pitch velocity and type, the question is what difference in average spin is meaningful. To provide a reasonable baseline for recent trends in average pitcher spin, we have modeled recent fastball spin trends in an attempt to find a rigorous potential answer to this question.

With that preamble, let’s skip to the point: average pitcher spin, at least on fastballs, has indeed declined precipitously in June. Viewed in terms of spin-velocity ratio (rpm / mph), the decline is so substantial that it almost certainly could not have happened by chance. Without pretending we know the extent or full motivation behind the changes pitchers have made, the evidence is consistent with a sudden decline in pitchers’ ability to spin their four-seam fastballs that coincides with MLB’s announcement of increased substance enforcement.

Modeling a change in spin

To model this change, we used the following criteria:

Without further ado, here is what our models find to be the monthly change in average pitcher spin-velocity ratio on four-seam fastballs since April 2017, relative to overall league average over that time period. We have shaded successive seasons for readability:

The change is more striking as a plot if we focus on a few months from each season around June, and then show the change from May 2021 and June 2021 at the end: 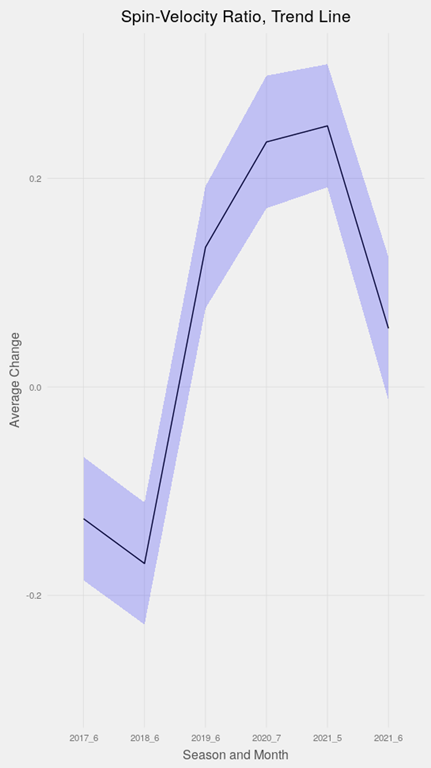 This plot shows not only a dramatic and consistent rise in average pitcher spin-velocity over the past four years, but also a dramatic partial decline in only two weeks (!) of this month. It’s worth noting that a good portion of the previous improvement in average fastball spin is likely the result of pitch optimization rather than solely due to use of prohibited substances, so the entire increase may never go away.

What is the probability that a change this steep could occur purely by chance? Treating the two distributions as approximately normal, the answer rounds to zero under any reasonable approach. That is consistent with the steepness of the drop plotted above.

Giving the magnitude of the change in average pitcher spin, and the timing of the change relative to the league’s crackdown announcement, it is reasonable to conclude that MLB was correct in its assessment of the effect that grip-enhancing substances have increasingly had on pitcher spin, and that its declared intention to root the substances out of the game is starting to have the desired deterrent effect. It remains to be seen how much more of an effect MLB’s enforcement initiative will have, and whether it will have the desired impact of increasing offense in the game.