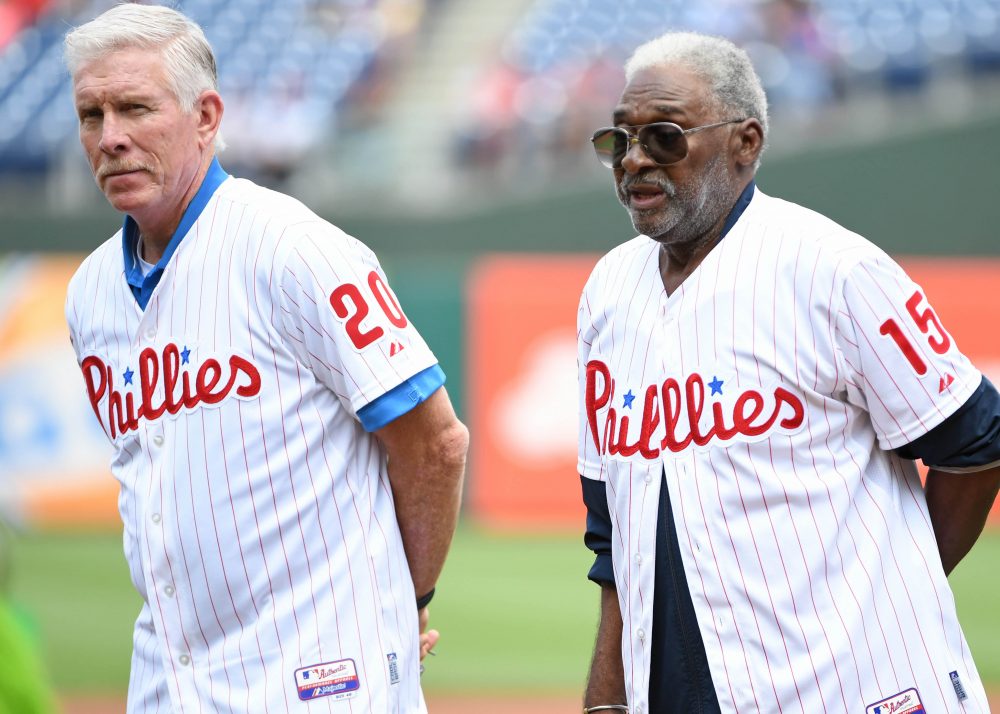 Dick Allen is dead and we’re such assholes. There is no gift that we won’t take for granted. We misunderstand and minimize and we make the worst possible use of what we’re given. It’s as Robin Williams put it when channeling Albert Einstein on his 1979 concert album, Reality… What a Concept: “What are you doing with my formula? I give you simply E=MC2, you meshuggeneh, you fuck it up like this?”

Williams’ point was that humanity produces the Theory of Relativity and, instead of cherishing the dim illumination it sheds on the darkness in which we dwell, it repurposes it to create weapons of mass destruction. Humanity produces Dick Allen, one of the greatest hitters of all time, and repurposes him as a vehicle for condemnation, harassment, vilification, reduction, dismissal. It makes him take tests that no other player must pass, not even the similarly derided Ted Williams. (Allen was self-evidently Black; if it had been more widely understood that Williams was half-Mexican it would have gone worse for him as well.) In addition to performing at a high level, it asks him to justify himself, to conform, to act the way they expect him to even as they boo and slur and throw enough garbage that he has to be moved from third base to left field to be safe from their literal slings and arrows.

Allen, sick of abuse from bigots, vows to play his way out of town, gets his wish, keeps the act up and plays his way out of several more. It is, at least at first, the only sane response. Later it’s hard to know the chicken and the egg of Allen’s disruptive, now-you-see-me alienated athlete persona, what was self-indulgent, what represented a broken sensitivity that could never be repaired, what was an ongoing, irresolvable Ragnarok: He had to bite the hand that fed him because it was abusive. That’s what you should do. “They treat you like cattle,” he later said of the fans. “It was like a form of slavery … They’ll do everything possible to destroy your soul.” Professionalism is for people who have earned it. Simultaneously, when he played, he hit, so what did anyone want? Glove-work? He was far less skilled in that way. Some players aren’t. He missed time? Ross Youngs died and they put him in. An injury is an injury whether it’s a pulled hamstring or a recalcitrant brain.

You’d think we’d have progressed far enough as a society to put mental illness, depression, anxiety, rage, on a par with a broken fifth metatarsal, but it turns out that’s expecting too much. Ever since Allen retired after the 1977 season, pundits have attacked him as being so disruptive that he prevented his teams from winning even as he put run after run on the scoreboard. This is nonsensical, but nevertheless Allen will soon be in his grave and the Hall of Fame, AKA the Cooperstown Castle for Flatulent Clerics, remains closed to him despite his amazing hitting prowess.

As always, we have to distinguish between the Hall of Fame museum and the Hall of Fame gallery. When we refer to a player having a cap and a bat in a glass case, that’s the museum. When we’re talking about annual elections for the latest player to be badly depicted on a plaque, that’s the gallery. Like all museums, the baseball museum attempts to display a representative sampling of artifacts that can convey aspects of the story of baseball. The gallery is a popularity contest disguised as a career-service award and vice-versa. It is the dumbest, most reductionist concept associated with baseball. Imagine a museum of natural history containing a hall of minerology, as many of them do. It has among its exhibits two lumps of rock representing substances found in abundance here on planet Earth. One is composed primarily of silicon, another of iron. Having passed through the exhibit, a curator then hands you a ballot and says they can only keep one—please vote for the best rock. That’s the idiocy of the gallery, which purports to elevate a supposedly select group of ballplayers and other figures above the rest without being able to articulate a consistent argument as to why.

Excising iron because it didn’t get 75 percent of the vote would be self-defeating, but that’s been the modus operandi of gallery voters (whether the Baseball Writers Association of America or various iterations of the Veterans Committee) from day one. It’s been a body of magical thinking and random disqualifications. Joe DiMaggio was told to fuck off for three years, and it’s a good thing that he didn’t choke on any fish bones in that time or Vince and Dom would have had to accept his plaque. Rabbit Maranville went in before DiMaggio, though no one really thought that a no-hit/good-field shortstop should go in ahead of Joltin’ Joe. The voters, self-appointed guardians of what? just decided that good boys have to wait their turns.

Maranville waited his turn until he was dead. His statistics hadn’t changed in 20 years, conceptions of his character hadn’t altered. He never had the satisfaction of knowing that he had made it. It’s been 43 years since Allen hung up his spikes, but the voters are still deliberating as to whether he’s improved enough in that time that they’ll hold their noses and let him in. No wonder Marvin Miller told them to go to hell. Exercising Olympic-level (and Olympian) disdain they ignored him until he died at 95, then put him in anyway.

Ask yourself who putting Allen in the gallery now that he’s gone would serve, who putting Miller in pleases. It’s not about accurate history. It’s not about completing the museum and telling a fuller story; the museum can do that without a single plaque, just like every other museum in the world does: The Louvre may subtly rank its paintings by where and how in its buildings they’re displayed (or if they’re displayed at all), but they don’t have the hubris to tell you that to appreciate them you have to subscribe to an arbitrary hierarchy. Nor does their acquiring or deaccessioning a painting make it a better or worse piece of art than it was the day before.

Similarly, the Hall of Fame cannot validate a player’s career. Instead, Hall voters’ displays of hauteur are about power with a soupçon of the collector’s delusional compulsion for completion, to have everything in its place, so they can enjoy the pleasant post-prandial bloat of having gotten everything they wanted: They exercised a control over the player they couldn’t exert during his career, then put him where they had always known he belonged. The price of nonconformity has been established pour encourager les autres. Now that the player is safely dead, the ban can be revoked.

Giving a dead man a career-achievement award is an act of pure cynicism. If you think enshrinement (there’s a word that stinks of pomposity) is anything more than that, you’re attempting to rationalize an honor that has simultaneously made room for the game’s best characters and its worst, the drunk and the sober, the egalitarian and the racist, the good players and the bad. It’s not a Hall of Character: Tom Yawkey is in the same gallery that purports to honor Jackie Robinson. Cap Anson and Joe Cronin stare down Satchel Paige. It’s not a Hall of Stats and yet a great player can conk out short of some arbitrary number and be denied the honor. It’s not a Hall of Literal Fame or Phil Rizzuto would have gone in 20 years earlier than he did and Roger Maris would have been given a plaque circa 1974. Felipe Alou and Dusty Baker, who had pioneering roles in coaching (and aren’t getting any younger) aren’t in, so it’s not a Hall of History either. Like so much of human life, it’s just a thing that happens because someone or a group of someones feels like it should.

Think of all the statues that were pulled down earlier this year. In the 1880s some Robert E. Lee fans commissioned a statue of their favorite racist traitor to stand on a Richmond, Va., thoroughfare. It was unveiled in 1890. The years ticked by. It was venerated. It was venerated. It was venerated. It was venerated. It was despised. It was defaced. Eventually it will disappear—unless enough members of whatever Lee constituency roughly equivalent to the BBWAA should somehow succeed in maintaining their fetish-object. That would be no different than the current iteration of the Veterans Committee giving baseball-at-large Hall of Famer Jack Morris in 2018. He speaks to them, the Daughters of the Morris Revolution, and since they have the keys to the building, they got their way. And if you don’t like it…

That’s why we’re the assholes. We know it’s meaningless and we continue to care. We continue to give our attention to the efforts of these pathetic jerks who elevated that mustached mediocrity and took in Jim Rice but kept Tim Raines and Alan Trammell waiting for decades, who let Ron Santo and Minnie Minoso die pining. We still watch, eagerly and without self-respect.

If the honor has no definition except that which a few High Priests of Nothing apply to suit their preferences and prejudices it has no intrinsic value except what it means to those who receive it. That’s real enough. Dick Allen was a dick at times, but often he was pushed. He was the first Black star on the Phillies, a team that waited until 1957 to dent the color line, until 1960 to have a regular of color. Phillies ownership damaged him. Phillies fandom damaged him. He did what he could to pile on himself. It was perverse, but not everyone is meant to be Jackie Robinson. That’s why Branch Rickey took such care in choosing him. Allen did what he could do despite his having a limitation that a kinder world never would have tested.

It is perhaps romantic to think that by taking Allen into the Hall, the Committee might have healed something that had been broken for decades, but it was worth trying. They had a chance in 2014, but passed him over by a single vote, then trusted to providence to keep him until they came around again. They forgot that God disposes of our lives, not Hall of Fame voters. Their trifling power is, every once in a while, to be kind to be someone. Having failed to do that, it’s hard to think of a use for them or the institution they represent.