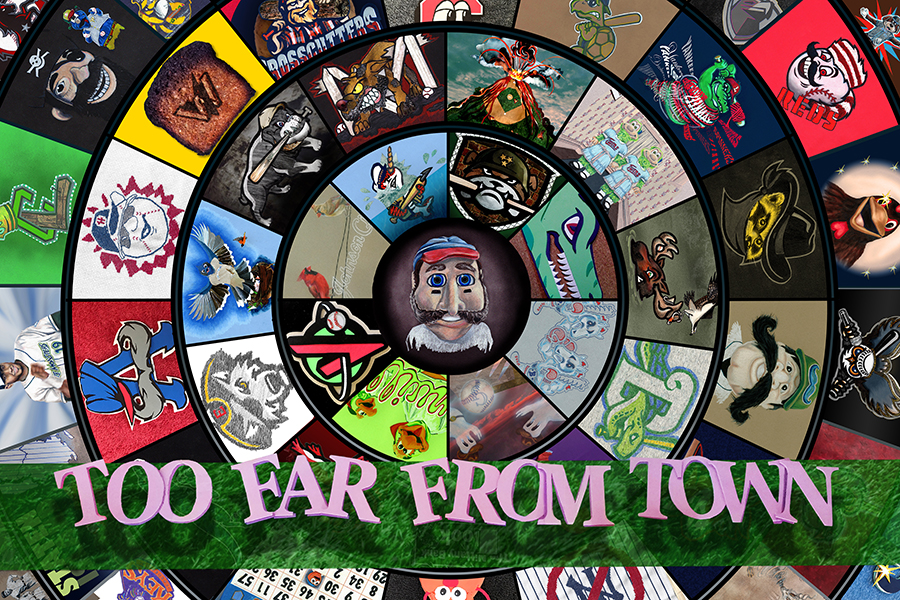 Every Tuesday and Thursday, Too Far From Town shined a light on the 42 (really 43) minor league baseball teams in danger of losing their major league baseball affiliations, effectively leaving them for dead. Today we say goodbye. You could take in the previous installments here.

As he went out and in to fetch the cows—
Some boy too far from town to learn baseball,
Whose only play was what he found himself,
Summer or winter, and could play alone.
One by one he subdued his father’s trees
By riding them down over and over again
Until he took the stiffness out of them,
And not one but hung limp, not one was left
For him to conquer.

Pete Crow-Armstrong was selected by the New York Mets in the first round of the 2020 MLB Draft. The teachings of Vietnamese monk Thích Nhất Hạnh heavily influences the 18-year-old prospect.

It means we are all connected. Some terminal cancer patients are given psychedelics and find this out without reading a single word of Hạnh. Most felt a calmness before their passing, knowing the world will continue after their bodies moved on, knowing they will live on, just in a different capacity.

The clouds turn to rain. The rain makes the grass grow. The cows eat the grass. The cows are the milk. The milk is your ice cream. Hanh suggests saying “Hello, cloud! I recognize you” to the ice cream. I don’t know if Pete Crow-Armstrong does this. I do know he will play Minor League Baseball next season, somewhere. If he ever read this series, he would know he was the next phase, the next version, of Abner, Jackie Mitchell, Snappy D. Turtle, Ryan Dunne, “Rocket” Ron Necciai, Dancin’ Bobby, Bob Cobb, Rowdy, Bingo, Dave Schermerhorn, Shelldon and Shelly, Miss Jane 1, Miss Jane 2, Nick Mariana, Virginia Raunig, Keith Comstock, Lou Lucas, Ed Olsen, KaBoom, Reed Rohlman, Emma Tiedemann, Percival Sumner “Pop” Rising, Peg Johnston, the osprey of Missoula, Joey Zanaboni, Dorothy Wulf, Toasty, The Millionaires Club, Rai Henniger, Nookie Monster, Charlie Petersen, Miguel Marte, Aqualung, The Toastman, Dave Bresnahan, et al. If he hasn’t read the series, that’s okay. He knows he has joined a special ecosystem, a wonderfully strange subculture. He just doesn’t know the names of those who came before him. But he understands he’s a part of a whole. He understands he is a continuation.

Major League Baseball has said the list of 42 (really 43) teams we have profiled for Too Far From Town is inaccurate, and when asked the obvious follow-up question of how so, exactly, would not respond. To some degree it doesn’t matter which teams will be stripped of their affiliations. All over the United States, people will hurt over this. The names are just different in each town. The names are of people. There will be human cost. There will be a reckoning of the spirit. Because a handful of wealthy people envision a slight further increase in monetary gain in the very short term.

We are a part of a whole here at Baseball Prospectus. Craig Goldstein green-lit this crazy thing and allowed it to run until we finished what we set out to do. Ginny Searle, Patrick Dubuque, Steven Goldman, Jen Mac Ramos and others provided encouragement and guidance along the way. Authors Eric Nusbaum and Skylar Browning were very generous with their words regarding this endeavor on social media. We discovered Benjamin Hill of MiLB.com had literally traveled to every home stadium of the teams we covered — we happily volunteer as your designated eater anytime, anywhere. We also acknowledge all of the journalists who helped us uncover and sort out some of the mysteries of the long, winding, usually murky past of the minor leagues in their contemporary reporting.

The clouds turn to rain. The rain turns to grass. The grass is eaten by cows. The cows turn into milk. The milk turns into ice cream. The ice cream turns into waste. The waste goes to the river. The river becomes a cloud. A circle. No death. No fear. Always baseball.

You need to be logged in to comment. Login or Subscribe
Shaun P.
This was one of the greatest series I have ever read at BP.com, and I have been reading here for almost 2 decades now. Thank you, Sarah, Davy, and Roger, for the beautiful prose and artwork, and the songs, and especially all the stories.

There is very much a human cost to losing something that was part of the fabric of your community, that was part of the act of being in community. Your series has shown that over and over. My hometown lost its minor league baseball team in the early 2000s and it still hurts. I am sorry anyone else has to experience that, anytime but especially now. I hope this series gave and will give some comfort to the fans of the lost teams, who, like me, didn't even get to say a proper goodbye in person.
Reply to Shaun
Roger Cormier
Thank you Shaun.
Reply to Roger
Llarry
This has been a really fun series. A lot of great stories and history. A few episodes were a little too surreal and abstract for my taste, but that's ok.

Still beats me how some folks at the top think that Baseball will be 'better' if there is less of it, and in fewer places, with fewer people involved. Baseball, more than other sports (hockey can match it in some places), is about people and places and personal interactions.
Reply to Llarry
Roger Cormier
Thank you Larry.
Reply to Roger
Greg Farkas
I want to thank all of you for the time and effort on this series. It has been uniformly outstanding and a reminder why we care so much about this game. You should be incredibly proud of this work.
Reply to Greg
Roger Cormier
Thank you Greg.
Reply to Roger
Jeffrey Hill
Thank you all so much for this series. Outstanding. I loved the surreal ones, too!

Something to chew the cud on: existence in this plane goes round as you attribute to Buddhism. But do humans? This series is a testimony to the resilience of memory, that what evokes our better angels is resistance to that inevitable wheel through memories' retellings.

As beings, in existence and form, we are impermanence; even the mighty among us, who name stadiums after themselves, extend to dust just as surely as do their monuments. Yet, as human beings, we participate in a cultural community that extends so long as the stories last. Thank you for retelling these stories and helping keep these people and their lives among us.
Reply to Jeffrey
Roger Cormier
Thank you Jeffrey.

It's funny but you writing about people who name buildings after themselves reminded me of Lyndon Johnson. Robert Caro had a hard time convincing George Brown to talk to him for his books, and he was the man mostly responsible for giving Johnson unprecedented power back when LBJ was only a congressman. Caro finally convinced him after he saw a library with George's brother Herman's name on it. Caro called George's longtime lobbyist from a phone booth and told him to tell his old boss ’"no matter how many buildings he puts Herman Brown’s name on, in a few years no one is going to know who Herman Brown was if he’s not in a book." Only then did George agree to talk.
Reply to Roger
brewerstt
Many thanks for a brilliant series. Without ever losing sight of the gloomy inspiration, it was always fun to read. Despite the large number of teams, the approach to the articles was always different, always creative, and the art and music were a real bonus. Great work. Frederick High-A is my nearby team, and they are one of the 43 teetering on the brink. It hits home how many thousands and thousands of people will go through the same uncertainty, and ultimately grief. I am hoping that the reduced draft will mean that many of the teams can still obtain real talent, and survive in new independent leagues.
Reply to brewerstt
Roger Cormier
Thank you for reading.
Reply to Roger