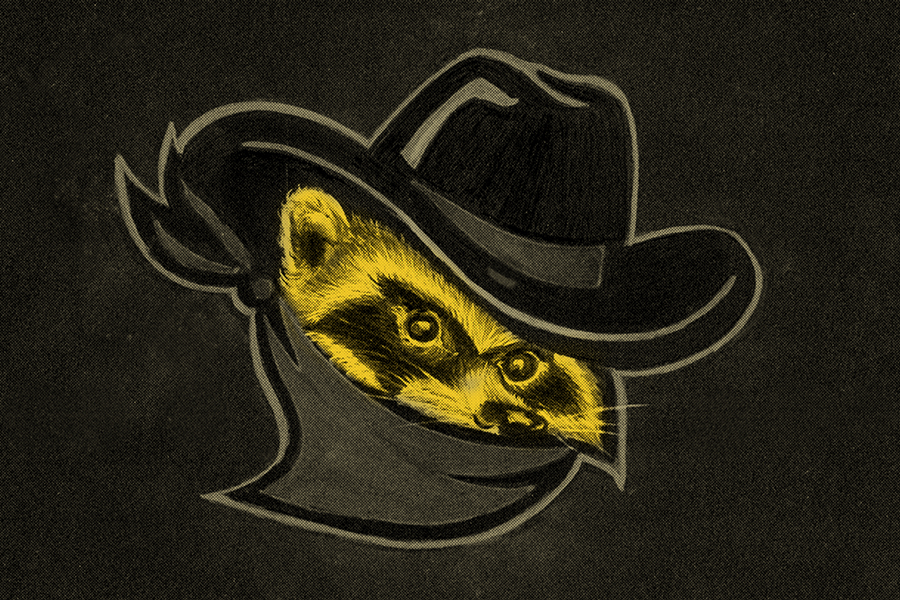 Every Tuesday and Thursday, Too Far From Town shines a light on the 42 (really 43) minor league baseball teams in danger of losing their major league baseball affiliations, effectively leaving them for dead. Today we focus on the Quad Cities River Bandits, a Single-A affiliate of the Houston Astros. You could take in the previous installments here.

Dave Heller came to town as majority owner of the Quad Cities River Bandits and oversaw construction of a ferris wheel, a double-decker carousel, a high-def videoboard and ribbon-board to Modern Woodmen Park, the pride and joy of Davenport, Iowa. It was already on the banks of the Mississippi River long before he showed up, with the Centennial Bridge cutting across the sky beyond right field. Yawn. It’s all about the cornfield behind the River Bandits bullpen in left, where gravel used to be up until 2008. At least according to Dave’s subconscious. Every night, someone or something emerges from that cornfield in his dreams. It’s a damn rabbit more often than not. The first animal that made a home in that area, when the corn was planted, long before it could be as high as an elephant’s eye, was a wascally rabbit. Dave recognizes it anywhere. He never confuses it for the other rabbit who emerges from the crop in his mind’s recollection.

A few times it was George Charles “Rabbit” Nill, of the 1901 Davenport River Rats, who made his presence known to Dave. Over 2,000 players have worn a Quad Cities uniform over the past 60 years alone, but sure, Rabbit Nill come on down. Heller made the mistake of asking him once how he got his nickname.

“I have no idea. Say, do you have any carrots?” 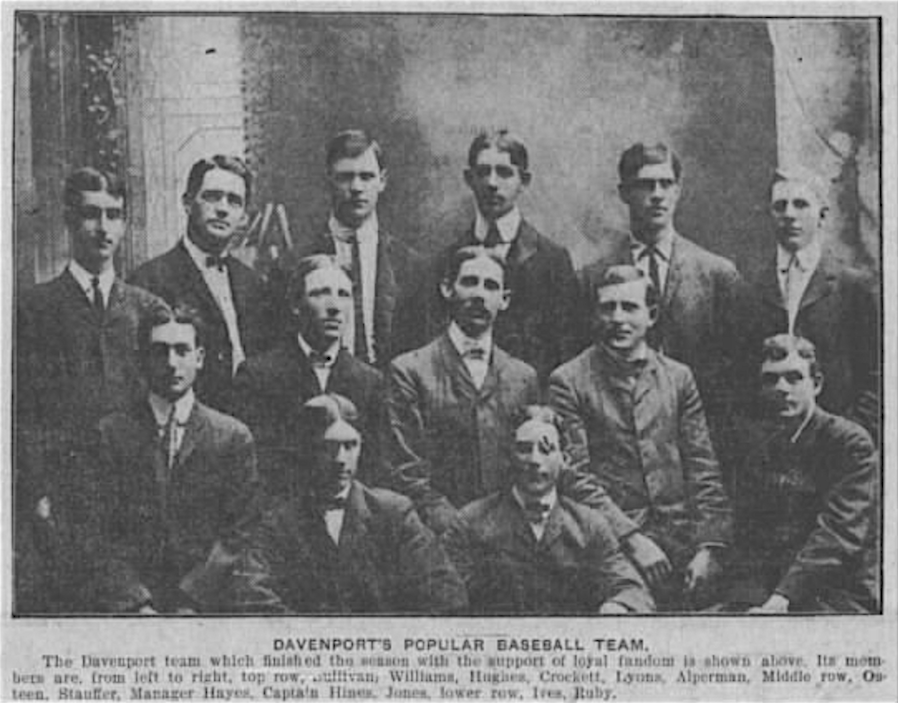 Sometimes Dave falls asleep and finds himself with Clyde the Orangutan. It’s never the Clyde the Orangutan from the Clint Eastwood classic Every Which Way But Loose. It’s the mascot from the Swing of Quad Cities days for some reason. The mid-2000s was a very different time. Nobody knew any better and were really just guessing about stuff more than usual? 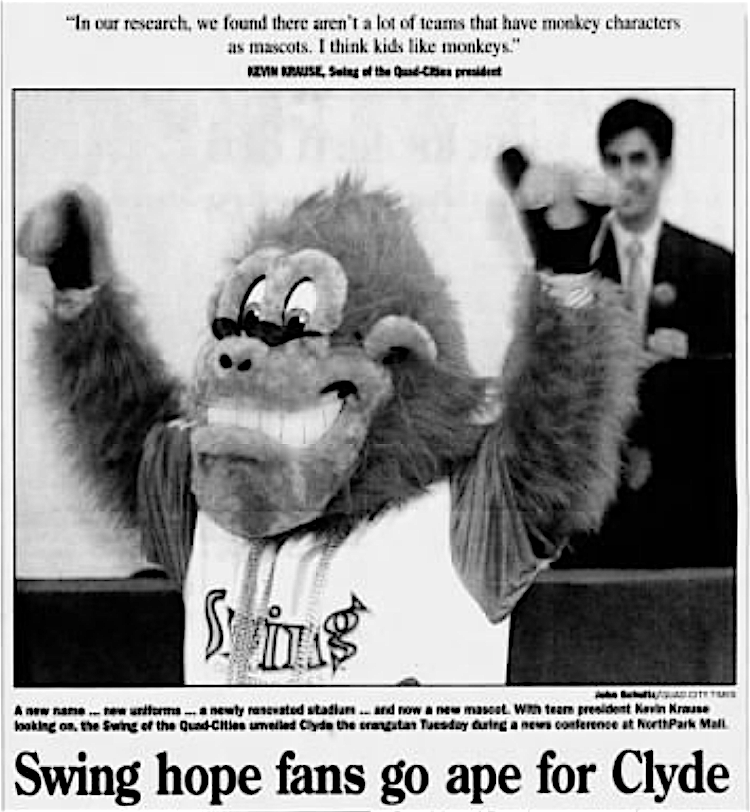 Sometimes Dave has the nightmare where the current mascot, Rascal the Raccoon, uh, crops up. He speaks in the voice of David Edwards, the Iowa State University graduate inside Rascal the last two seasons. It’s always the three most heartbreaking sentences he spoke to NPR when they interviewed him back in May. It’s just him saying “I am the big raccoon”, “It’s the most fun I’ve ever had”, and “I feel very scared about my future” over and over and over again. He wasn’t just speaking of his mascot gig. Heller knows this even in his dreams. Still.

What’s worse is Darin, from the Internet. Darin loves to point out how the Quad Cities has really been the Quint Cities since the late 1940s, when Bettendorf, Iowa got that Alcoa aluminum plant and became as big and chesty as Davenport and the Illinois cities of Rock Island, Moline, and East Moline. Darin is so damn loud when he asks why there’s no video of River Bandits players coming out of the cornfields when the starting lineups are announced even though it was supposedly the point of the corn getting planted in the first place 12 years ago. Darin gets even louder when he asks himself the question which MLB franchise the River Bandits is an affiliate of, then even louder still when he answers his own question: the Houston Astros. Heller a couple times foolishly responded to Darin, somehow calmly, explaining his guys were not hiding in the dang cornfield stealing signs. When this happened Darin simply laughed, put his hands on his hips, and said, still loud as hell, he never technically said anything about sign stealing, but “you”, Dave Heller, did. 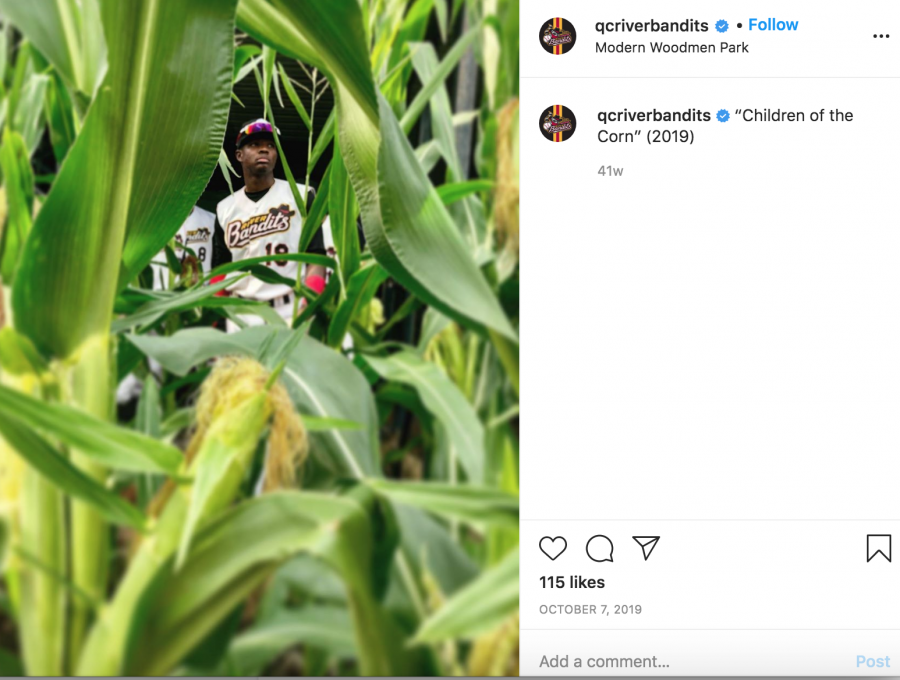 Sometimes out of the Quad Cities corn stalks appear duos. Brothers. Jesse James Barnes and Virgil Barnes (1915 Davenport Blue Sox). The Borgmann Bros, Fred and Harry (1930 Blue Sox). Demetri and Santos “Sandy” Alomar Sr. from the 1961 Quad Cities team pay Heller a visit together. Those Mauer boys, Joe and Jake, 2002 Quad City teammates too. Yet another Mauer brother, Bill, on the team in 2003 and 2004, the one lucky Mauer who was around for one of the Clyde the Orangutan years, sometimes hangs out with Heller, asking if he’s seen Joe and Jake. Once in awhile Brad Ditto, wearing his 1984 Quad City Cubs attire, pops up and waves. Heller laughs, then feels bad Ditto and Bill Mauer can never seem to make it on the same night and get acquainted.

Every blue moon the 1933 Davenport Blue Sox arrive (so on the nose, come on Dave’s subconscious) drinking champagne with their corn. Heller always recoils when he first sees them mixing those two. They earned it, Dave always supposes. That team went 83-32 and won the Mississippi Valley League Championship Series. Placed 58th in The National Baseball Association’s top 100 minor league teams of all-time list, even though they had fewer losses than 98 other teams on it. For some reason Heller always expects them to all be dressed in blue. (Same deal more or less when the 1879 Davenport Browns say hey.) 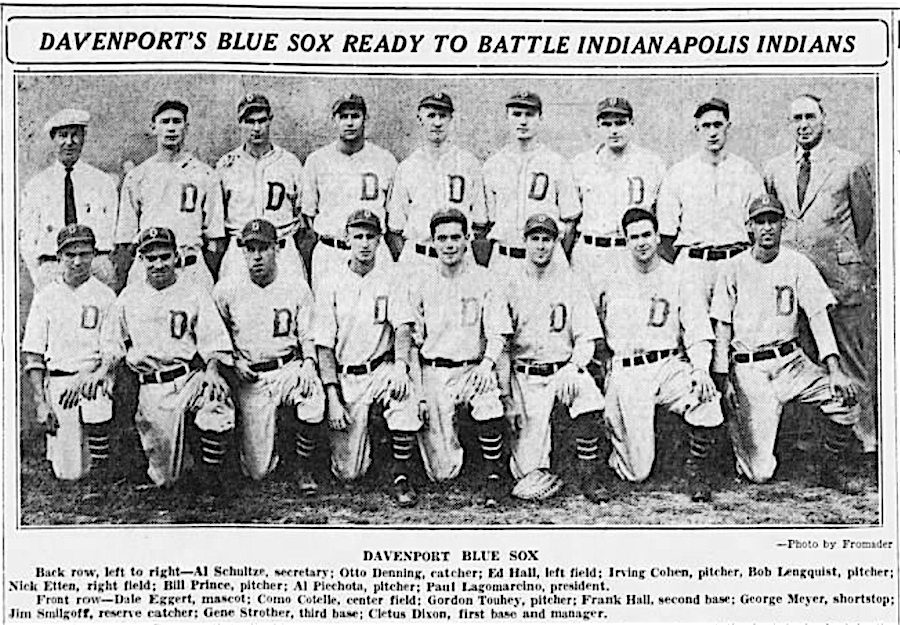 Dave is always nice to the 1888 Davenport Onion Weeders. He’s too polite to ask what the hell an onion weeder is. 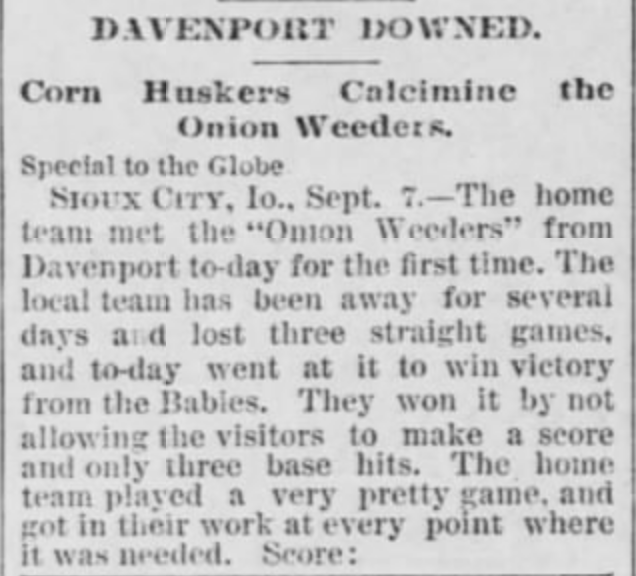 “Who are you and why are you looking at me like that?” Ray Chapman always responds. 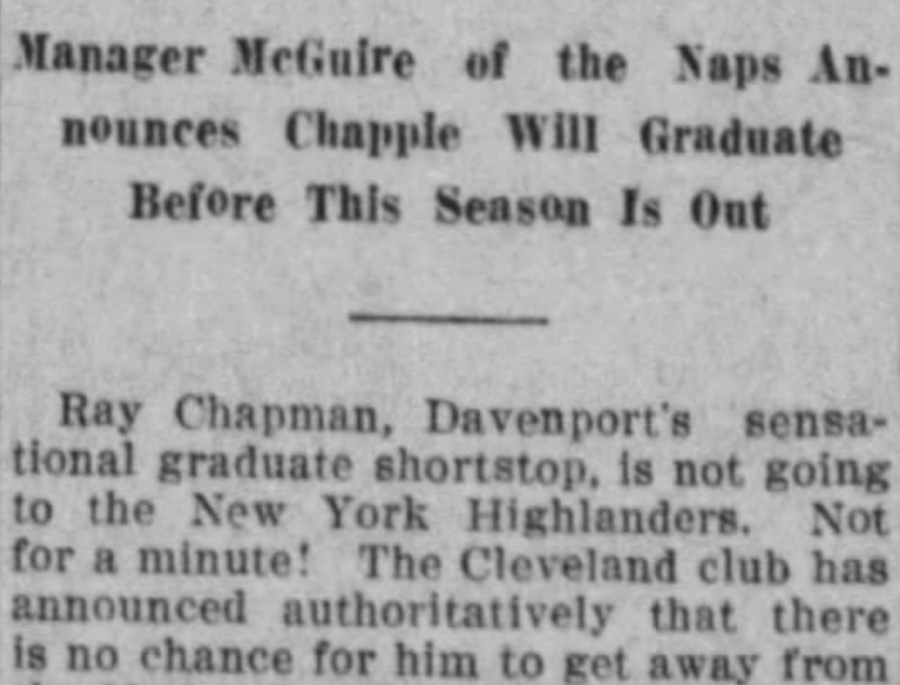 It’s more fun when Satchel Paige, Cool Papa Bell, Rogers Hornsby and Johnny Mize appear to Dave. The four played in an exhibition game there in 1936. Hornsby couldn’t touch Paige, striking out every time. He blamed the lights and said he had never played a night game before. He still does this in Heller’s dreams. Paige and Bell always roll their eyes. 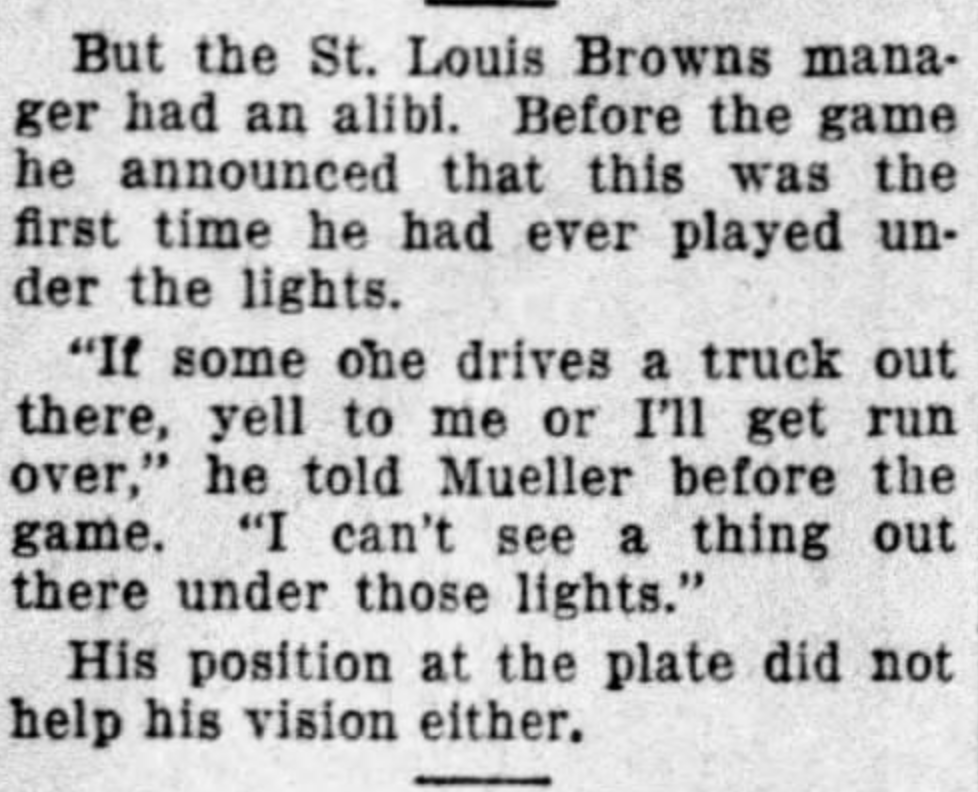 Pat Jordan will swing by. Sadly without a pen.

Dave always loves to see Dorothy Wulf materialize; she was the Quad Cities’ “Fan of the Century”, the “Quad Cities first lady of professional baseball” after all. Wulf passed away in March 2008, so she never saw the corn grow in the ballpark she had frequented for 66 years, sometimes as a member of the front office and the official scorer. Her ashes were interned near the ballpark’s flagpole, following a ceremony on the berm. Wulf sometimes asks Heller if the players have earned their steak dinners. Dorothy and her husband Frank housed Quad Cities players some years. When they would win five games in a row, the two invited the team to their home for steak, grilled by chef Frank. “Yes, they have.” Heller replies. 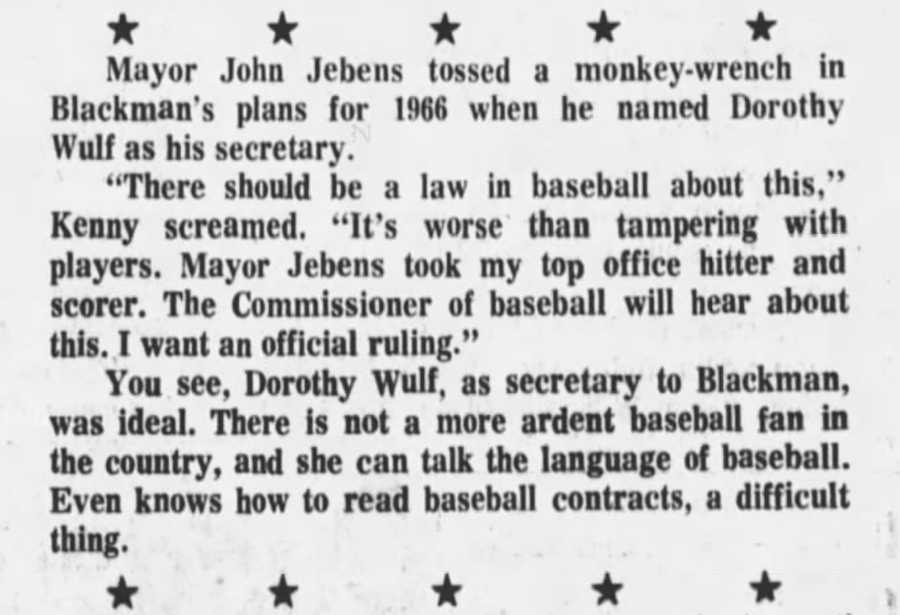 “I take it this isn’t 1931 anymore?” John O’Connell always asks. “Because I spoke here, at Municipal Stadium, on its grand unveiling, May 26, 1931, young man,” the sports editor of the Davenport Democrat always adds. Sometimes Heller tells O’Connell the field is later named after him. Sometimes he doesn’t, so he doesn’t have to explain the name changed again to Modern Woodmen Park, and that Modern Woodmen is a “fraternal benefit society”, and what a “fraternal benefit society” is.

“Pure Davenport labor built this,” O’Connell always says to the heavens, trying to gesture around the entire ballpark with one massive sweeping motion.Then he quotes himself writing about that first day ages ago. “The people who like the sport of baseball are greeting each other with smiles and handshakes today. Their gloom has turned to sunshine, and everybody is happy — or should be.” Heller always wants to respond with clever wordplay, quipping “That’s so corny,” but just as he’s about to say it, the nightmare begins.

You need to be logged in to comment. Login or Subscribe
Patrick Cork
Love the article on my home town River Bandits. one small correction tho. It should say Illinois cities, not Indiana.
Reply to Patrick
Craig Goldstein
Those damn I-states! Right you are, of course. This has been amended.
Reply to Craig
Roger Cormier
Thanks Patrick. Sorry bout the I-state mIx-up.
Reply to Roger
Greg Weber
Really miss sitting out in the right field stands with the mighty Mississippi flowing 15 feet away. What a beautiful stadium.
Reply to Greg
Josh Hendrix
My five year old told me today she wanted to go see a Cardinals game and ride the ferris wheel (down at Modern Woodmen). We live in Davenport and the Cards are my favorite team, and she hasn't completely figured out the distinction. Anyway, it had me go through a whole moment worried she might never ride the ferris wheel at a Bandits game again. Despite that, this whole Too Far From Town series has been excellent. And in a year with very little baseball, BP has been putting out some of the best writing I've read from you all. So keep up the good work.
Reply to Josh
Roger Cormier
Thank you Josh, we appreciate that. The wheel may turn for the little one yet.
Reply to Roger